Hydrogen companies were given a boost this week after the Prime Minister vowed to inject £500million to ‘turn water into energy’ as part of a 10-point plan for Britain’s green recovery.

The goal is to generate 5GW of low-carbon hydrogen production capacity by 2030 for industry, transport, power and homes.

However, critics say the targets are nowhere near enough compared to Germany’s and France’s respective plans to invest €9billion and €7billion in hydrogen.

UK green recovery fund: Hydrogen companies were given a boost this week after the Prime Minister vowed to inject £500million to ‘turn water into energy’

‘The burden of instigating meaningful change rests not only on government to set policy, but on business to implement it and financial markets to provide the required funding,’ noted analyst Rob Morgan at Charles Stanley Direct.

‘All investors can help by making conscious decisions with their own investments, prioritising sustainability and supporting industries to evolve.’

AFC Energy, which develops alkaline fuel cells that use hydrogen for electricity production, surged 26 per cent to 24p, while waste-to-hydrogen firm Powerhouse Energy climbed 20 per cent to 3p.

In the retail space, Mulberry soared 44 per cent to 244p after Mike Ashley’s Frasers Group hiked its holding to 36.82 per cent. The Sports Direct owner has until 17 December to decide whether to make a cash offer to snap up the entire luxury bag designer.

Turning to the wider market, the AIM-All Share touched two-year highs after advancing 2 per cent to 1,023, outperforming the 1 per cent rise to 6,364 of FTSE 100.

Mini-investment bank finnCap ticked 13 per cent higher this week to 22p after posting stellar half-year results, indicating the strength of the small-cap segment of the equity capital markets. The company, which saw profits and revenues rocketing 166 per cent and 44 per cent respectively, expects the good run to continue amid a lively market. 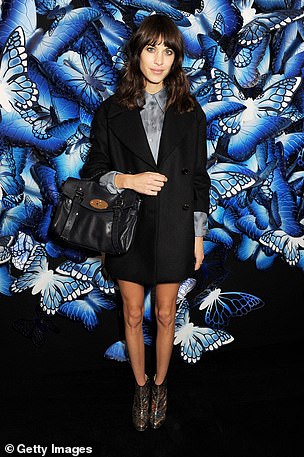 Mike Ashley’s Frasers Group hiked its holding in Mulberry to 36.82 per cent (Pictured: Model Alexa Chung with a Mulberry handbag)

Looking at the risers, oiler Block Energy soared 65 per cent to 5p after agreeing new terms for its acquisition of Georgia’s Schlumberger Rustaveli, adding some 29,000 barrels of crude oil inventory.

Elsewhere, food ingredient developer Provexis jumped 13 per cent to 0.8p on the back of a distribution agreement that will see its Fruitflow+ Omega-3 dietary supplement product distributed in China.

Among the fallers, Remote Monitored Systems tanked 44 per cent to 2p after anticipating supply issues, since demand for its subsidiary Pharm 2 Farm’s antiviral face masks is expected to outstrip production line capacity of 5million masks per month.

In Africa, oil exploration and production firm Lekoil plunged by a third to 1p after its nominated adviser tendered its resignation so the oil and gas firm is looking for a new one. Under AIM’s rules, if a company doesn’t have one then trading in its shares is suspended.

Meanwhile, Covid-19 test makers Novacyt and Genedrive continued their descent and slipped 12 per cent to 780p and 9 per cent to 58p respectively, despite updating the market on progress in their research and development. Positive news on potential vaccines have depressed the stocks, although experts say we’ll need assays for the duration of the pandemic.

Finally, Kistos is likely to float on the market next week, having pencilled in its first day of trading for November. The investment firm focuses on offshore and onshore hydrocarbon production, energy storage, infrastructure and energy generation projects in the UK and Europe.