Small businesses on fixed-rate energy deals face a sudden, crippling surge in their bills when the Government’s current Energy Bill Relief Scheme ends in April. Many could go out of business.

Thousands of businesses signed up to fixed-rate deals last year when the cost of energy was soaring at record highs. They hoped they were protecting themselves against the uncertainty of future price rises.

The relief scheme, introduced in October last year, helped to curb costs by effectively capping the price of gas and electricity. For example, a business that fixed at 75p per kilowatt hour (kWh) has been paying 21.1p per kWh thanks to the cap.

But last week the Government announced that from April, the cap will be replaced by a new scheme called the Energy Bills Discount Scheme, which amounts to a much less generous discount on energy bills.

As a result, a business that has fixed at 75p per kWh will be paying 73p per kWh from April – a discount of just 2p per kWh.

Unlike households, businesses that sign up to a fixed-rate deal are locked in and cannot shop round for a better deal if wholesale prices fall. Growing numbers of small business owners are considering whether to shut up shop altogether.

The Butchers Arms pub in Sonning Common, Berkshire, is closing next month due to the rising costs. Its energy bill has already risen from £20,000 to £60,000 a year and would soar even higher once the price cap is replaced by the new discount scheme in April.

Gavin Mansfield, a business development manager for Brakspear brewery and pub company, for which The Butchers Arms is a tenant, says he has never known it so bad in his 33 years working in the industry.

‘Some pubs will see bills increase by three or four times,’ he says. ‘Most are on fixed contracts and cannot switch suppliers, so they’re stuck. I don’t know why the Government hasn’t put a proper cap in place or enabled commercial premises to switch if they can get a better deal.’

Pubs are likely to be particularly hard hit by the reduced energy bill support, due to their tight margins and high energy costs.

Under the current scheme, a pub could receive up to £3,100 a month in support, depending on energy use. Under the new scheme they will get just £190 a month, according to Treasury estimates.

Mick and Claire Sugg run The Hare & Hounds – a neighbouring pub to The Butchers Arms. They are managing to keep the pub open by closing early when there are just a few customers and by not turning on kitchen equipment, such as fryers, unless there are advance bookings for food.

But they, too, will face an even greater struggle from April. ‘If I signed up to an energy contract today, even if prices go down there would be no way out,’ says Mick. ‘Pubs are closing all around us because of the situation – I’ve never known anything like it.’

Small businesses on variable tariffs are better placed, as wholesale prices have fallen considerably in recent weeks. They are paying around 17.25p per kWh for electricity and 5.71p per kWh for gas. 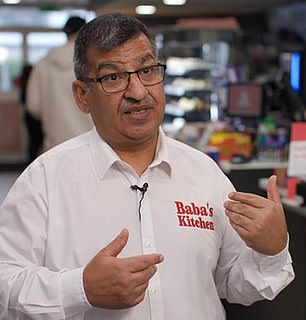 Threat: Abdul Majid is facing energy bills of £6,000 a month

The discount remains static regardless of how high wholesale prices soar, so small businesses will once again have direct exposure to the volatile energy market caused by Putin’s war with Ukraine.

The Government has set aside £5.5billion for the Energy Bills Discount Scheme, which will last 12 months, down from the current Energy Bill Relief Scheme which has cost around £18billion.

Paul Wilson, policy director for the Federation of Small Businesses, says the switch from a price cap to a discount will cripple small businesses.

‘We will definitely see more businesses close, and if energy prices go back up to the high levels we’ve seen before, the number of closures will be much higher,’ he says.

‘We’re moving from a scheme that gives quite a high degree of certainty over the price that businesses are going to have to pay for electricity and gas, to one where you might get a very limited discount, and only in circumstances when the price you are paying goes over a certain threshold.’

Abdul Majid, from Bellshill near Glasgow, has run his successful post office and convenience store Baba’s Kitchen for 14 years and was awarded the MBE for services to charity and the community.

He worries about what will happen when his energy bills are exposed to the wholesale markets. His bills have already gone up from £2,000 a month to £3,500 and he has been told they will rise further to £6,000 by April.

‘The frightening thing is that my business is being threatened by something which is totally out of my control,’ he says.

‘I feel like I’m being held to ransom by the energy companies and while I should get some benefit from the discount scheme, I’m still looking at a large increase, which will impact on the business, my household finances and potentially the community.’