With only two pupils on its register, it was the smallest school in the country.

But its doors will now have to close – because one of the youngsters is off to secondary school.

After 180 years of teaching, Bleasdale Church of England Primary in the Forest of Bowland has been deemed ‘no longer financially viable’ by Lancashire County Council.

The school taught youngsters in the remote village of Bleasdale for nearly two centuries but has been recently stricken by a dwindling pupil roll.

After 180 years of teaching, Bleasdale Church of England Primary in the Forest of Bowland has been deemed ‘no longer financially viable’ by Lancashire County Council

Over the past five years numbers have plunged from 16 down to two.

A Year 6 pupil is moving on to secondary school in September, leaving just one youngster remaining.

The departing 11-year-old said: ‘It’s been great – I’ve liked being here for the past seven years and made a few friends.’

Associate head teacher David Fann called the decision ‘very sad’ and said the school – which is due to close on Tuesday – was ‘the core of the community’.

He also said that the seven members of staff were shocked and numb, adding: ‘It will hit them hard. When the school goes… I worry for the community.’

The fate of the remote rural school had been hanging in the balance for decades, but following a public consultation earlier this year the county council decided it should close. 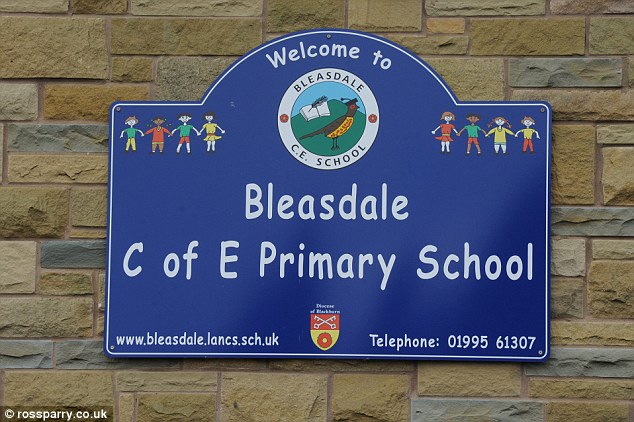 Over the past five years, numbers have plunged from 16 down to two. A Year 6 pupil is moving on to secondary school in September, leaving just one youngster remaining

Bleasdale village itself recorded a population of only 167 in the 2011 census.

The school, which was able to accommodate almost 60 pupils, was rated ‘good’ in its last inspection by Ofsted in 2015.

Its website encourages parents to ‘travel the extra mile’ to send their children to Bleasdale and claims two pupils until recently made a 40-mile round trip from the town of Penwortham each day.

Bleasdale Primary had been competing with several nearby primary schools, the closest being three miles away and also under the umbrella of the Church of England. But that school also has surplus places, according to the diocese.

Edwina Grant, executive director for education and children’s services at Lancashire County Council, said: ‘I would like to reassure everyone that all the views that we received during the consultation we ran earlier this year were considered very carefully, before the decision was taken to move to the next stage of the process.

‘Unfortunately, we have to acknowledge the reality that the school is no longer financially viable with such incredibly low pupil numbers.

‘There will only be one pupil attending the school from September this year. This figure may only increase by a few pupils over the coming years, so there really is no other option. Our paramount concern is always to provide the best education we can for all young people.’