Foodies are now creating ‘smashed’ McDonald’s soft serve in the latest dessert trend to take off on social media.

Adrian Widjonarko, from Sydney, shared a TikTok video of himself smashing five cones of vanilla ice cream in a tray and eating the mash-up with a spoon.

The unusual food trend has been going viral in Indonesia, with many saying the ice cream fusion offers a crunchy element with every spoonful. 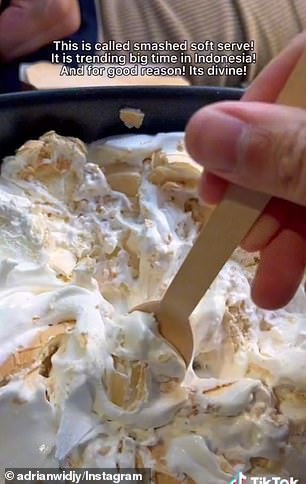 ‘Normally you’d eat the soft serve and then the cone. But this allows you to enjoy it at the same time,’ Adrian told Daily Mail Australia.

In his video, the food blogger ordered five cones from McDonald’s to create the ‘smashed soft serve’ for him and his friends to enjoy.

‘This is an amazing hack. It’s called smashed soft serve. It’s trending in Indonesia for a good reason, it’s divine,’ Adrian said in the video. 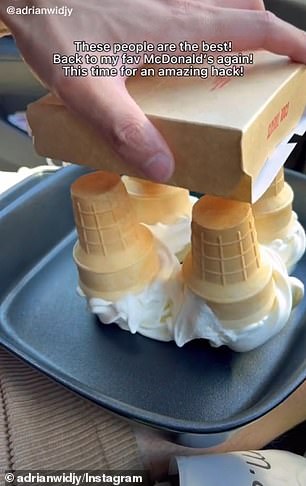 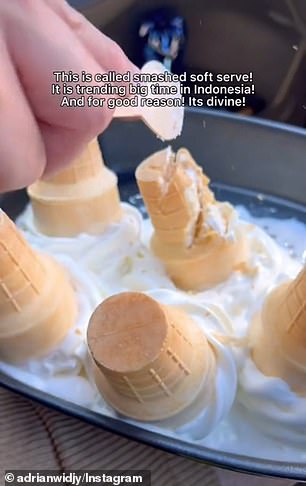 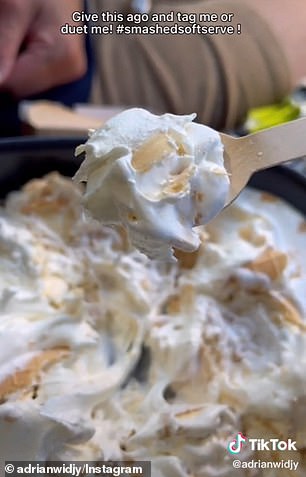 Adrian ate the mash-up with a spoon

His video has since been viewed more than 360,000 times, with many saying they couldn’t wait to give it a go, while others suggested adding toppings.

‘This is great! Everyone is going to start bringing in an empty dish to Maccas to go this. Maybe they can add some caramel sauce?’ one wrote.

Another said: ‘Hold your horses. Imagine adding brown sugar syrup and pearls on it.’

While one added: ‘Oh my god, wait, hold up. This actually looks really good.’

Those who already tried smashed soft serve confirmed it tastes ‘amazing’ while others said it tasted better than it looked.

Indonesians have been sharing the dessert trend all over social media, with many adding toppings like crushed Oreos, chocolate and wafer sticks.