Richard Madeley can finally enjoy the tranquility of his 60ft outdoor coastal swimming pool without the unwanted stench from a neighbouring farm.

The veteran TV host, 65, has put up with the smell of cow manure and infestation of flies on the grounds of his Cornwall home he shares with wife Judy Finnigan for two decades.

It comes after agreeing a deal with a local farmer to shelve complaints about the smell in exchange for not opposing plans to build the pool.

Happy: Richard Madeley and his wife Judy Finnigan can finally enjoy the tranquility of their 60ft outdoor coastal swimming pool without the unwanted stench from a neighbouring farm 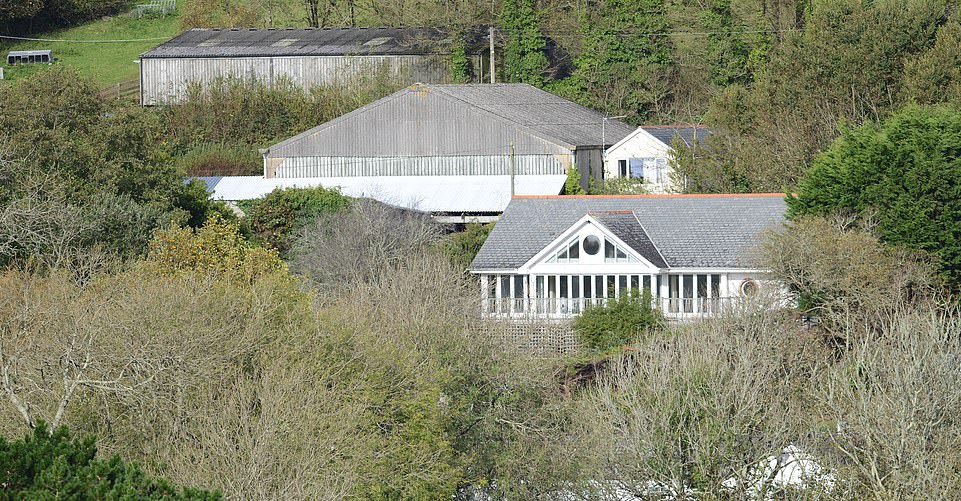 Good result: However, Porthallow Farm in Talland Bay, near Looe, is no longer the home of cattle, opting for a far more lucrative bed and breakfast service instead, meaning the unpleasant smell engulfing Madeley’s six-acre estate has gone

However, Porthallow Farm in Talland Bay, near Looe, is no longer the home of cattle, opting for a far more lucrative bed and breakfast service instead, meaning the unpleasant smell engulfing Madeley’s six-acre estate has gone.

The farm’s owner John Hutchins told MailOnline: ‘There are no cattle on the farm any longer – it’s all been down to economic forces.

‘The B&B provides us with a bit of pin money. It does well. We get quite a few repeat bookings.

‘It’s been very busy with staycationing this summer.’

Madeley, who is due to appear on the new ITV series of I’m A Celebrity… Get Me Out of Here! which starts on Sunday, built the half-indoor, half- outdoor pool at the highest point of his garden – 15 feet from the farmland – in order to obtain the picturesque coastal views.

Himself and Finnigan, 73, revealed in 2002 how the smell of the 100 cattle and 1,000 sheep filled the air with the pungent smell of cow and sheep dung. 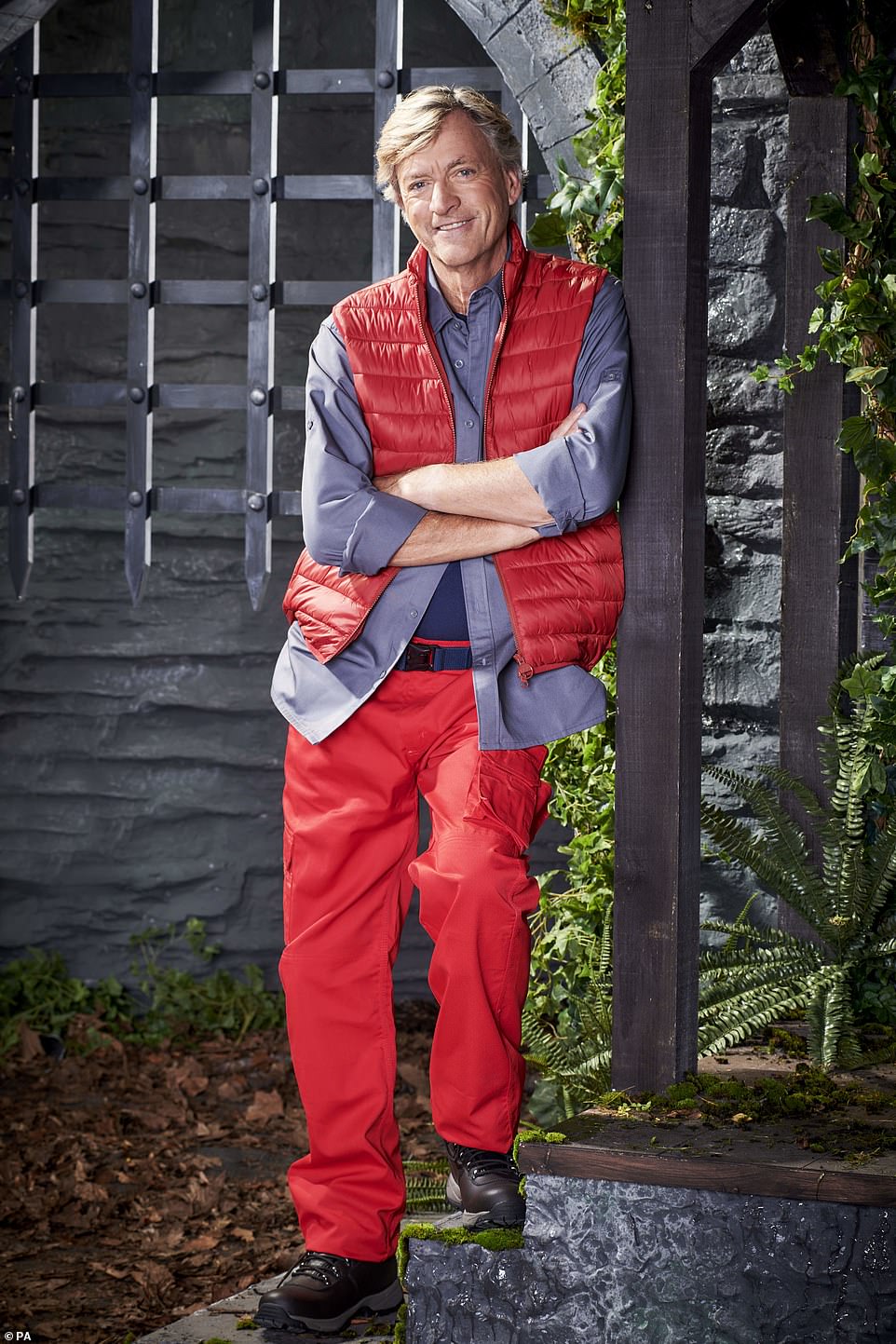 Star: Madeley, who is due to appear on the new ITV series of I’m A Celebrity… Get Me Out of Here! which starts on Sunday, built the half-indoor, half- outdoor pool in his garden

They also said swarms of flies would inhabit their house and garden all year round, especially in the summer, and made their feelings known to local planning authorities.

Farmer Hutchins and other groups complained at the time that for environmental health reasons, the pool location was too close to the farm yard’s smells and fly swarms.

He argued they should put the pool somewhere else, saying: ‘If they complain it is likely the environmental health authorities-will make me change the way I farm.’ 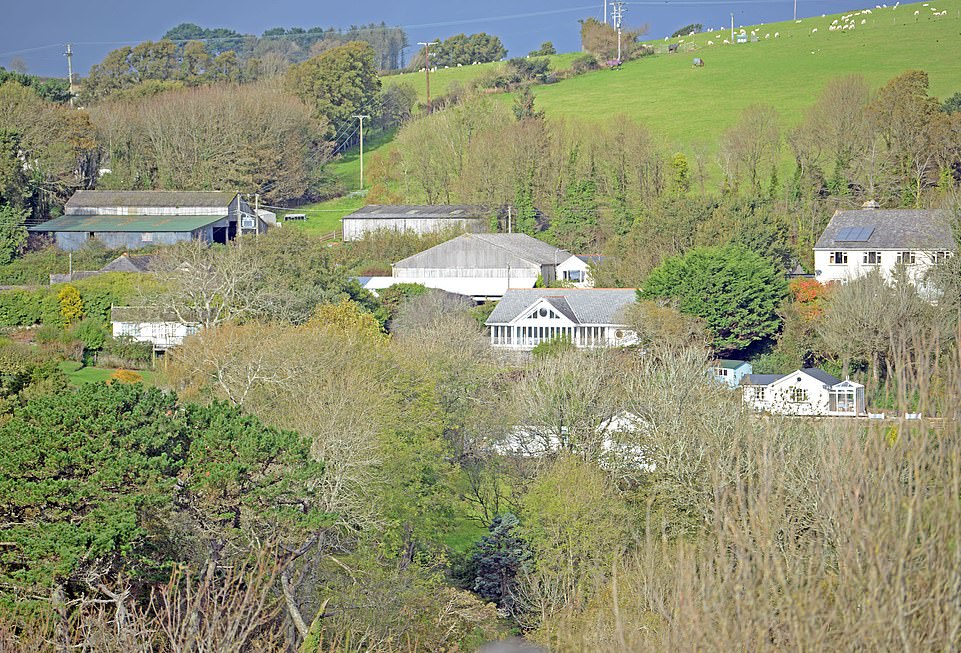 Agreement: The farm’s owner John Hutchins told MailOnline: ‘There are no cattle on the farm any longer – it’s all been down to economic forces’

But in order to get planning through, the TV couple elected to make a pledge not to complain about the pong from the farm and ignore the flies.

And they did, writing to planners: ‘We are most happy to make the most formal assurance that if permission is given for our pool plans to go ahead, we will make no complaints about the consequences of choosing to live in the countryside.

‘We can assure the council and our neighbouring farmer that we are not stereotypical ‘townie’ types bent on recreating Surbiton in Cornwall.’ 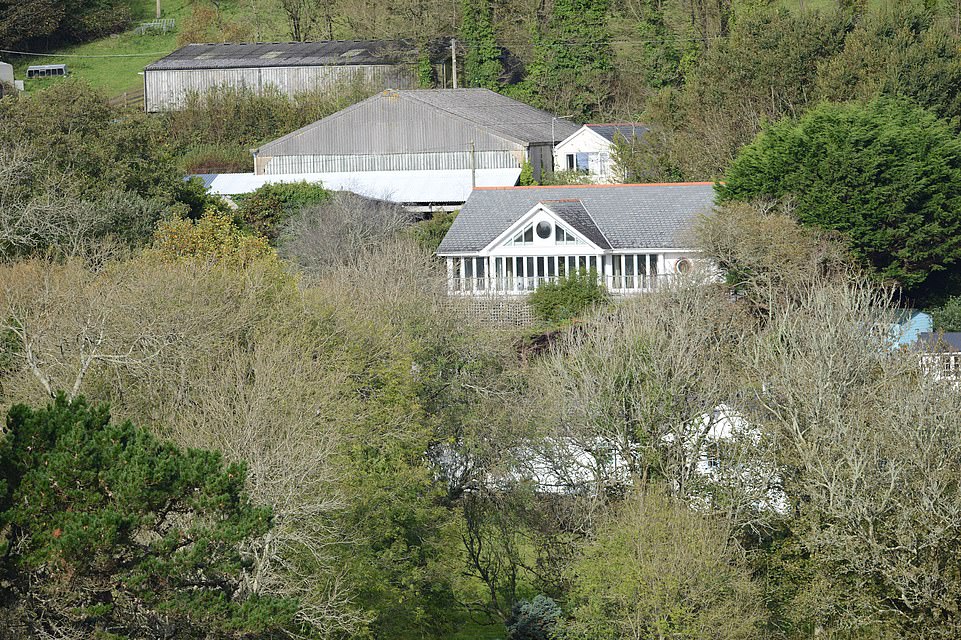 Sprawling: Madeley and Finnigan purchased the house on the six-acre estate in 1998 for just £235,000. It is now worth the millions

Speaking to MailOnline about the end of their feud as Madeley prepares to enter the I’m A Celeb castle in Wales, Farmer Hutchins added: ‘These sort of problems always occur when townies move from the city to the countryside.

‘It’s not just Richard and Judy.

‘In terms of being neighbours, they have done exactly as they said they would (about the smell and flies).

‘They have never complained. They’re good as gold. ‘We get on very well with them. They’ve got a good family. They’re good people and they’re always considerate.’

And he will be watching him in action on Sunday, saying: ‘If he’s on it I’ll definitely be tuning in.

‘Whether he wins or not depends on whether the show attracts the older generation or not.

‘He’s no spring chicken any more is he?. If he wins, I’ll buy him a pint when he’s next down.’

Madeley and Finnigan purchased the house on the six-acre estate in 1998 for just £235,000. It is now worth the millions.

Stunning: The estate in nestled in the hills in Cornwall’s countryside

They also own a £7.2 million detached property in Hampstead, North London, and a villa in Saint-Paul-de-Vence, near Nice in the south of France, which they bought in 2005.

Speaking exclusively to MailOnline this week ahead of I’m A Celeb, Richard admitted that he will miss his beloved wife Judy while he’s on the show – and will also miss their wedding anniversary for the first time.

He said: ‘It is the longest time by far we’ve ever spent apart. Already it’s been almost two weeks. I can’t even talk to her. Sunday, when the first show goes out, is our 35th wedding anniversary. That will be the first anniversary I’ve missed – and it’s a big one.’

‘I spend every day with her, working or at home. I feel strangely dislocated – she’s my right arm.’ 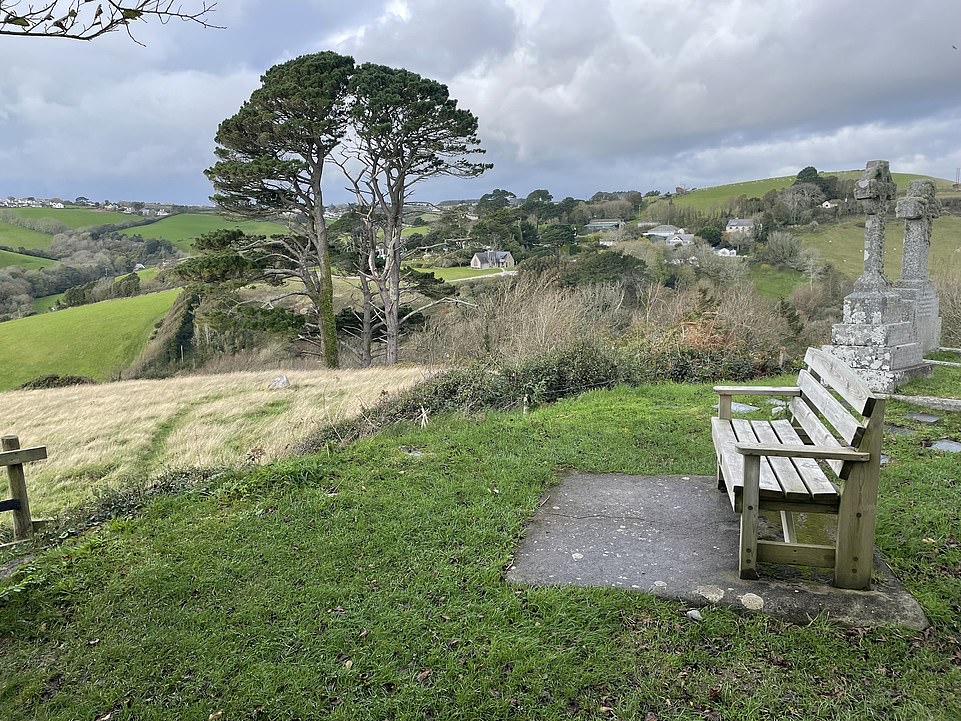 Views: The surrounding countryside is an oasis of peace and calm

BIGGEST MISCONCEPTION TO DISPEL IN THE CASTLE: It’s nice to be able to show the fun side of me rather than the serious news presenter.

PHOBIAS: The idea of small, enclosed spaces with cockroaches and spiders is horrific!

ROLE IN THE CAMP: I will give out hugs and make the food more edible!

MISS MOST: My comfortable bed and lovely bath.

DREAM CAMPER: Angelina Jolie and Daniel Craig – we wouldn’t have a problem getting stars if he were in the Castle.

BIGGEST MISCONCEPTION TO DISPEL IN THE CASTLE: People always see me as very composed and serious on the diving board. This will be a nice opportunity to let people get to know me better.

ROLE IN THE CAMP: I don’t mind helping out with cleaning.

MISS MOST: My bed!

BIGGEST MISCONCEPTION TO DISPEL IN THE CASTLE: People know me as a very bubbly person but when I am outside of my comfort zone, I can be shy.

ROLE IN THE CAMP: I love twerking on a Friday night and I’m going to teach everyone how to do it in the Castle!

MISS MOST: My cat and lip gloss.

BIGGEST MISCONCEPTION TO DISPEL IN THE CASTLE: Nothing. I don’t worry about what people think.

PHOBIAS: Heights. I’m not sure how I will feel if I have to walk across a plank very high up!

ROLE IN THE CAMP: Cook and interviewer. I love finding out about people’s lives.

MISS MOST: Aside from Judy and my family, not knowing what is happening in the news. I am a news junkie.

DREAM CAMPER:  The late Jimmy Greaves. I would have loved to chat about goal scoring in the Castle with him.

BIGGEST MISCONCEPTION TO DISPEL IN THE CASTLE: People don’t really know the real me at home and I’d like to show people the motherly side, the side my family sees.

PHOBIAS: I am hoping I will overcome my fears to take part in the Trials!

ROLE IN THE CAMP: Mum and to organise some fun dance routines!

MISS MOST: My notepad and pencil –I am known for always having to write down ideas.

DREAM CAMPER: Giovanna Fletcher –she is such a lovely, warm person.

BIGGEST MISCONCEPTION TO DISPEL IN THE CASTLE: People don’t know the real me and I want everyone to get to know me.

PHOBIAS: Confined spaces and heights but I want to give the Trials a go to bring back some stars.

ROLE IN THE CAMP: Castle chef and someone who everyone can confide in.

MISS MOST: My mum. I live with her and it’s going to be hard being away from her.

BIGGEST MISCONCEPTION TO DISPEL IN THE CASTLE: Great to be able to show people with all disabilities they can try different things in life.

ROLE IN THE CAMP: Chef – so long as there isn’t too much pressure to make the food interesting!

MISS MOST: TikTok, my mum and dog.

BIGGEST MISCONCEPTION TO DISPEL IN THE CASTLE: None because I never hide behind a false image. What you see is what you get.

PHOBIAS: I am going to tell you when I am in the Castle!

ROLE IN THE CAMP: Chef. I enjoy cooking at home and I will be hoping to add some garlic and rosemary to the food.

MISS MOST: My partner and my little girl. It’s going to be tough.

CLAIM TO FAME: The Saturdays star

BIGGEST MISCONCEPTION TO DISPEL IN THE CASTLE: People think if you are in a pop group, you lead a glamorous lifestyle and won’t get stuck in, but I’m determined to muck in with all the chores.

ROLE IN THE CAMP: The serial hugger.

MISS MOST: Wayne and my boys.

BIGGEST MISCONCEPTION TO DISPEL IN THE CASTLE: None but I would like to show everyone what I am like in real life rather than my soap character, Aaron Dingle.

PHOBIAS: I am absolutely dreading the eating Trials! I fear I will gag!

ROLE IN THE CAMP: A shoulder to cry on and a person everyone can come to if they have a problem.

MISS MOST: My fiancée, Steph, and our new baby.

DREAM CAMPER:  Fred Sirieix or any ex football player. I won’t be able to leave them alone asking lots of questions!