The level of deforestation of the Amazon rainforest is at its worst in more than a decade, according to a new report by Brazil’s National Institute for Space Research.

Between August 2018 and July 2019 there was more than 3,700 square miles of deforestation of the Brazilian part of the rainforest, up 30% on the previous year.

The area of deforestation is the largest recorded since 2008 and is about the size of the US states of Delaware and Rhode Island combined.

Chief Kadjyre Kayapo, of the Kayapo indigenous community, looks out at a path created by loggers. A Brazilian government report found that that the rate of deforestation in Brazil’s Amazon rainforest is at its highest level in more than a decade

He says illegal mining, logging and land-grabbing cause most deforestation.

Brazillian President Jair Bolsonaro’s administration has spent a lot of energy attacking concerns raised by environmentalists about the scale of deforestation, including firing the former head of the Brazilians space research institute.

His administration has advocated the loosening of protections around natural reserves and indigenous lands as a way to promote economic development.

In August, the head of the space research institute, Ricardo Galvão, was fired shortly after President Bolsonaro accused his agency of manipulating deforestation data to make the government look bad.

The president later suggested, without citing evidence, that non-governmental groups could be setting some of the fires in the Amazon to draw attention to his administration. 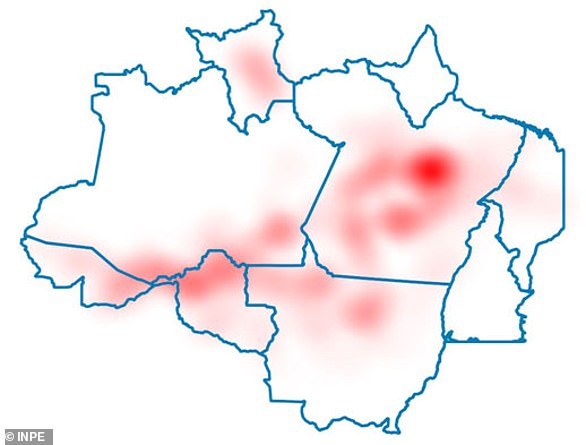 According to the latest report, the Brazilian state of Para accounted for nearly 40% of all deforestation during the 2018-19 period but illegal logging increased markedly in the states of Roraima and Amazonas 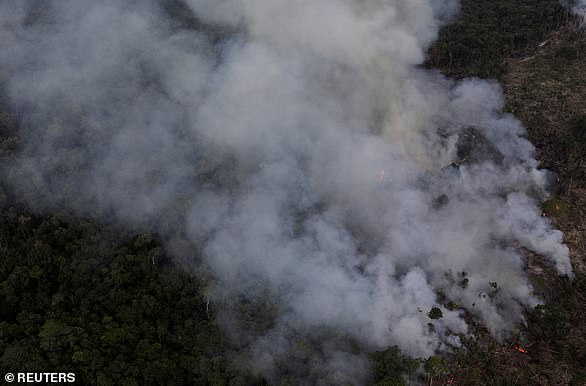 An aerial view of a tract of Amazon jungle burning as it is cleared by farmers in Itaituba, Para, Brazil. Environment Minister Ricardo Salles illegal mining, logging and land-grabbing cause most deforestation

The annual data published by the space research agency confirms the institute´s earlier reports that deforestation was on the rise.

The latest data is actually 42% higher than what was previously reported.

‘It is unacceptable that the Amazon is still being destroyed,’ the WWF conservation group said in a statement.

In July and August, fires in the Amazon region spread at a pace unseen since 2010, before slowing in September.

Farmers, developers and others often use fire to clear deforested land for soy production or pastures.

‘His administration is trashing practically all the work that has been done in recent decades to protect the environment and end deforestation’, said Cristiane Mazzetti, Greenpeace Brazil’s Amazon Campaigner. 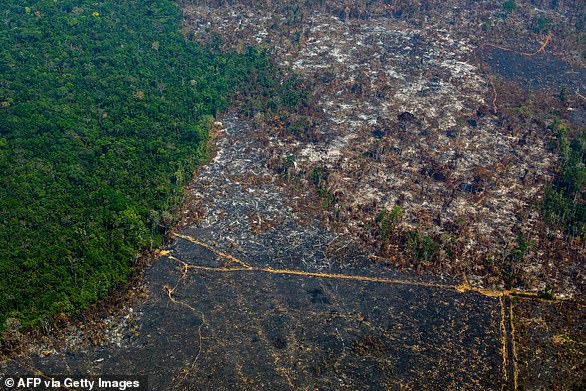 An aerial view of deforestation in Nascentes da Serra do Cachimbo Biological Reserve in Altamira, Para state, Brazil. Between August 2018 and July 2019 there was more than 3,700 square miles of deforestation of the Brazilian part of the Amazon rainforest

The Brazilian government has denied any wrongdoing and says it is taking all the steps needed to protect the Amazon.

As fires raged a few months ago, President Bolsonaro sent the military to help battle some blazes and banned most legal fires for land-clearing in the Amazon for two months.

Fires in the Amazon eventually fell below the monthly average in September.

According to the latest report, the Brazilian state of Para accounted for nearly 40% of all deforestation during the 2018-19 period but illegal logging increased markedly in the states of Roraima and Amazonas, officials said.

The report is preliminary, and its data will be confirmed next year.