Smugglers caught with gold up rectums in failed tax dodge

A group of South Korean tourists went to painful lengths to avoid tax – by hiding blocks of gold up their rectums.

Seven would-be smugglers, all women in their 50s and 60s, were caught out at customs at Chubu International Airport, Japan, last month when X-rays revealed each of them was carrying at least five metal objects in her abdomen, The Asahi Shimbun reported.

Each block weighed in at some 200 grams.

The smugglers were caught out when X-ray machinery at customs in Chubu International Airport, Aichi prefecture, showed up at least five blocks of gold in each woman’s abdomen

The women, who had flown from Incheon International Airport in South Korea, will get the gold back if they stump up a fine for smuggling and attempting to avoid paying consumption tax.

Gold smuggling in Japan has rocketed since ‘consumption tax’ – which covers transactions in goods and services – was bumped up by three per cent in 2014, according to government officials.

Customs officials reported 467 cases of attempted smuggling and tax evasion in that time, or a 60 per cent increase.

But staff at Chubu Airport, in Tokoname, admitted this was an unusual case. 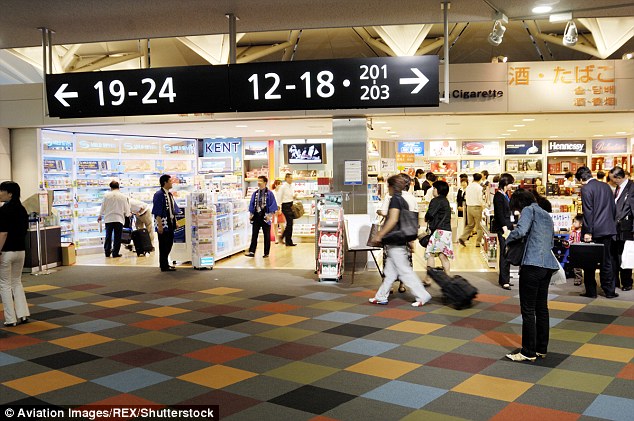 It is not the first time Chubu International Airport (above) has been targeted by smugglers intent on getting around consumption tax, with at least two incidents just this year

Three-quarters of gold smuggling cases reported in Japan involve the precious metal being stowed among accessories or inside luggage handles.

But it is not the first time air passengers have resorted to desperate measures to dodge the Japanese consumption levy.

Six people were arrested at the same airport last month after five gold bars valued at 22.8 million yen (£151,000) were discovered in the toilet of a plane bound for Tokyo.