Snakes experienced a sudden burst of evolution after the dinosaurs were wiped out 66million years ago – expanding their diets to include birds, fish and small mammals, study finds


It is well known that the demise of the dinosaurs led to a remarkable diversification of mammals and birds on Earth 66 million years ago.

But a new study has found that snakes also experienced a similarly spectacular burst of evolution, expanding their diets from insects and lizards to include the newly-available fish, birds and small mammals.

This rapid change led to the nearly 4,000 species we see today, according to researchers from the University of California and University of Michigan.

To better understand how this evolution happened, experts studied the diets of 882 living snake species and used mathematical models to reconstruct how the eating habits of their ancestors changed and diversified after a giant asteroid hit Earth.

They found that the most recent common ancestor of living snakes was insectivorous — consuming only insects and worms — but after the Cretaceous-Paleogene extinction event, snake diets rapidly expanded to include vertebrate groups that were also flourishing in the wake of the dinosaurs’ extinction.

Snakes experienced a huge burst of evolution after the dinosaurs were wiped out, a new study has found, expanding their diets to include the newly-available fish, birds and small mammals 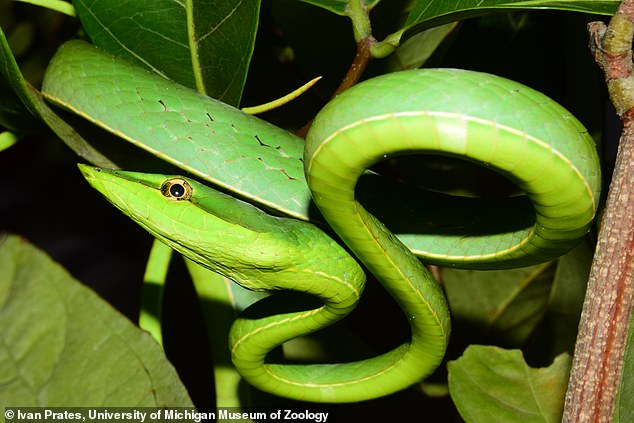 This rapid diversification led to the nearly 4,000 species we see today, according to experts from the University of California and University of Michigan. Pictured is a green vine snake

ARE HUMANS BORN WITH A FEAR OF SNAKES & SPIDERS?

Researchers at MPI CBS in Leipzig, Germany and the Uppsala University in Sweden conducted a study which found that even in infants, a stress reaction happens when they see a spider or snake.

They found that this happens as young as six months-old, when infants are still very immobile and have not had much opportunity to learn that these animals can be dangerous.

‘When we showed pictures of a snake or a spider to the babies instead of a flower or a fish of the same size and color, they reacted with significantly bigger pupils,’ said Stefanie Hoehl, of the University of Vienna.

The researchers concluded that the fear of snakes and spiders is of evolutionary origin, and similarly to primates or snakes, mechanisms in our brains allow us to identify objects and to react to them very quickly.

‘Much of the stunning ecological diversity in snakes seems to result from evolutionary explosions triggered by ecological opportunity,’ said lead author Michael Grundler, of the University of California.

‘We found a major burst of snake dietary diversification after the dinosaur extinction— species were evolving quickly and rapidly acquiring the ability to eat new types of prey.’

Researchers said similar outbursts of dietary diversification were also seen when snakes arrived in new places, including when they colonised the ‘New World’.

‘What this suggests is that snakes are taking advantage of opportunities in ecosystems,’ said co-author Daniel Rabosky, of the University of Michigan.

‘Sometimes those opportunities are created by extinctions and sometimes they are caused by an ancient snake dispersing to a new land mass.’

Diet diversification in snakes slowed after the initial explosion, but some lineages experienced further bursts of adaptive evolution, the study concluded.

As snake fossils are rare, direct observation of the ancient ancestors of modern snakes — and the evolutionary relationships among them — is mostly hidden from view. 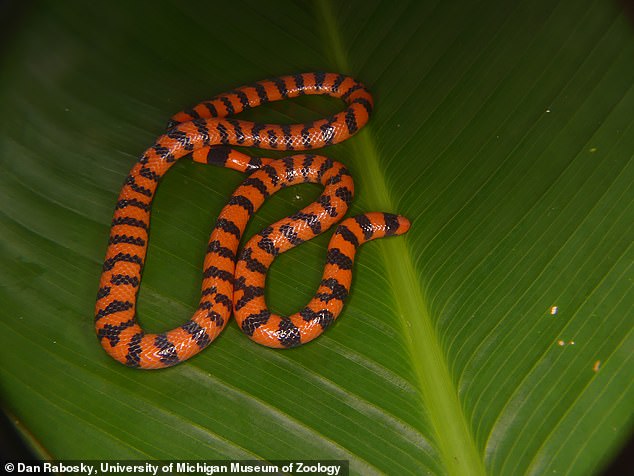 Researchers said similar outbursts of dietary diversification were also seen when snakes arrived in new places, including when they colonised the ‘New World’ 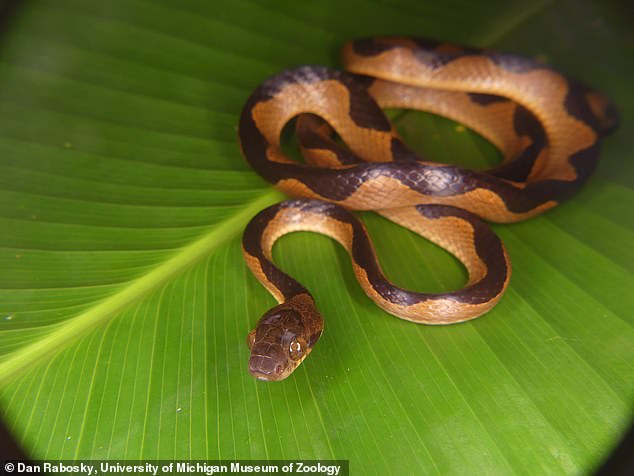 Diet diversification in snakes slowed after the initial explosion, but some lineages experienced further bursts of adaptive evolution, the study concluded

However, those relationships are preserved in the DNA of living snakes. Biologists can extract that genetic information and use it to construct family trees, which biologists call phylogenies.

Grundler and Rabosky merged their dietary dataset with previously published snake phylogenetic data in a new mathematical model that allowed them to infer what long-extinct snake species were like.

‘You might think it would be impossible to know things about species that lived long ago and for which we have no fossil information,’ said Rabosky.

‘But provided that we have information about evolutionary relationships and data about species that are now living, we can use these sophisticated models to estimate what their long-ago ancestors were like.’

The new research has been published in the journal PLOS Biology.