Rolling out this week, the feature is letting users create a 3D version of their Bitmoji for their Snapchat Profile and Friendship Profile on the app.

Bitmoji are the animated avatars that Snapchat users create to represent themselves on the social media platform, but previously they were only available in 2D.

Snapchat users can tap this link on their phone to create their 3D Bitmoji in the Snapchat app.

Alternatively, clicking the link on a computer will bring up a Snapcode that users can scan on the app.

– To scan a Snapcode:

1. Open Snapchat and point your camera at the Snapcode

2. Press and hold the Snapcode on your screen to scan it

Snap Inc, the US company behind Snapchat, said 3D Bitmoji will offer a new way for users to ‘express themselves and their personalities on Snapchat’.

‘From peace signs and prayer hands, to scenic beaches and trendy animal print backgrounds – Snapchatters can now match their 3D Bitmoji to their every mood,’ the firm said.

‘Using Pixar-quality 3D capabilities, Snapchatters will see enhanced details on their customised avatar – from the clothing textures and unique embellishments from their favourite fashion labels, to the sparkle and shine on their avatar’s earrings.’

Bitmoji is seen by Snapchat as a fun and engaging way for users to present themselves on the platform.

Ba Blackstock, the CEO of Bitmoji, thinks cartoon avatars resonate with users when they engage with others online.

‘It’s not just about having an avatar [where] you have a picture of yourself,’ he told Hollywood Reporter.

‘It’s more about what can you do with that avatar? What part does it play in your digital life?’ 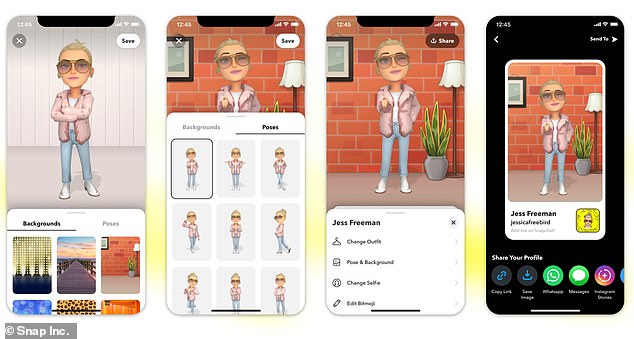 From peace signs and prayer hands, to scenic beaches and trendy animal print backgrounds, Snapchatters can now match their 3D Bitmoji to their every mood, the firm says

‘Not everyone is comfortable putting photos or videos of themselves online.

Blackstock also said he thinks of Bitmoji as a ‘kind of digital ID’.

‘It really is this essential representation of not just what you look like, but your personality,’ he said.

The Bitmoji app was created in 2007 as a website called Bitstrips, which was acquired by Snapchat in March 2016 for around $100 million.

And in 2018, Snapchat launched Bitmoji Stories, a personalised comic strip starring users and their friends’ Bitmojis.

In its first month, Bitmoji Stories were seen by more than 40 million unique viewers.

WHAT ARE BITMOJI AND HOW CAN YOU GET ONE?

Bitmoji are personal emoji that can be sent to other Snapchatters as a sticker in Chat and on Snaps.

To link Bitmoji to your Snapchat account, make sure you’ve downloaded the latest versions of both Snapchat and the Bitmoji app

To link the two accounts:

1- Swipe down on the Camera screen

5 – If you’re already logged in, you’ll see a screen that will ask if you want to Agree & Connect. 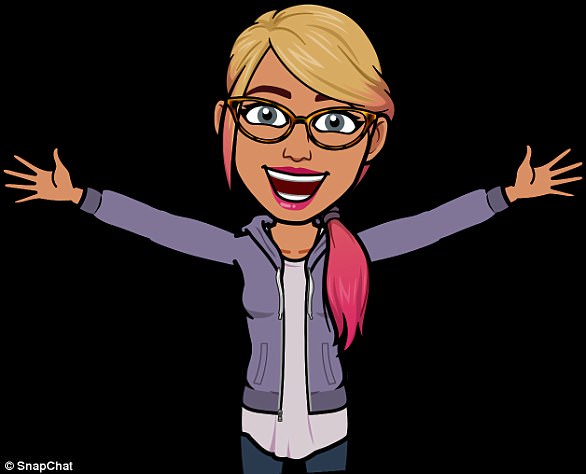 If you currently have a Bitmoji account but choose to ‘Create with Snapchat’, your old one will not be available for use in the Snapchat app.

To change your Bitmoji Selfie:

1 – Swipe down on the Camera screen.