Sickening footage has emerged of a gang of girls attacking two teenagers in a shopping centre.

The group are seen viciously kicking and stamping on their young victims as they struggle on the floor at the Arndale shopping centre in Manchester.

The victims can be seen trying to shield themselves as the blows rain down on them, in the video which has been widely shared on Snapchat.

Police say they are investigating an attack at Manchester Arndale which took place last month and left two teenage girls injured, but have been unable to confirm if the footage relates to the same incident.

It is understood that officers have been contacting local schools to try and find out who is responsible for at least two assaults in the shopping centre.

Mobile phone film of one incident was shared by a concerned parent who said he was worried about the actions of ‘these disgusting youths’.

He asked to remain anonymous, but said he believes the victims in the attack were dragged down to the ground by their hair and kicked by ‘feral’ youths whilst someone else filmed the incident.

Footage was then shared on social media platform Snapchat. 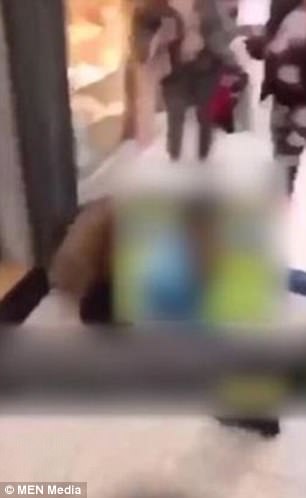 A caption which is overlaid across the footage appears to suggest that the attack was retribution for a racist comment.

It has been claimed by a parent that the same group of girls attacked another two youngsters on the same day.

Greater Manchester Police have not yet been able to confirm a link.

However a police contact said that officers are investigating an attack on two ‘school aged’ girls which unfolded at the Arndale Centre at around 5.40pm on March 22.

The Arndale Centre has been approached for a comment.