Sneering thug, 22, who was NAKED as he brutally beat ex-girlfriend is jailed for 28 months

Jack Bushell (pictured) beat his then-girlfriend unconscious in the street

A brutal domestic abuser who chased his girlfriend while he was naked to beat her in the street was jailed yesterday.

Jack Bushell, 22, was locked up for 28 months after his assault on Jade Gallagher left her covered in blood and vomiting as she lost consciousness.

He dragged the mother of one through the street after already beating her at home.

Bushell, from South Shields, held her head with one hand as he pummelled her with the other.

Under the influence of cocaine and alcohol, he turned up at her house at 5.15am after they had both attended a party on a Saturday night despite him being subject to a restraining order.

As he punched her, the thug called her a ‘f***ing stupid cow’ while the 26-year-old tried desperately to get away from him. Then he threw her to the floor and kicked her body. 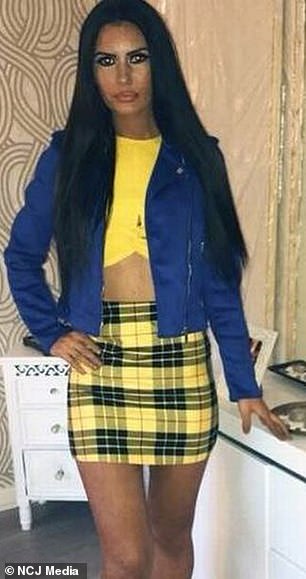 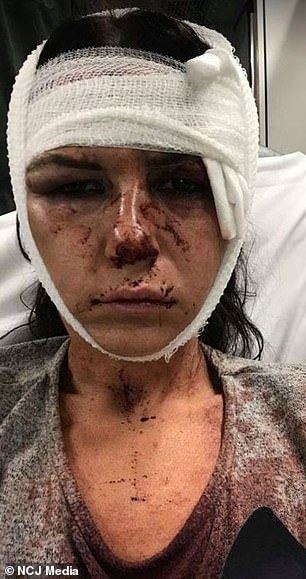 Jade Gallagher (pictured, left, before the horrific attack and, right, after) passed out in the street when her boyfriend chased her down

When she did manage to kick him and flee the house, she screamed at one neighbour ‘Julie, he’s going to kill me’. One neighbour reported that Ms Gallagher was ‘covered in blood and her hair was an absolute mess’.

But a naked Bushell followed her and dragged her through the street as neighbours called Northumbria Police.

Miss Gallagher said in a statement read to Newcastle Crown Court: ‘I thought he was going to kill me.

‘I’m sure if I had not managed to escape he would have killed me. He showed no signs of stopping and was completely out of control. Even in the street, with neighbours watching, he continued to assault me. 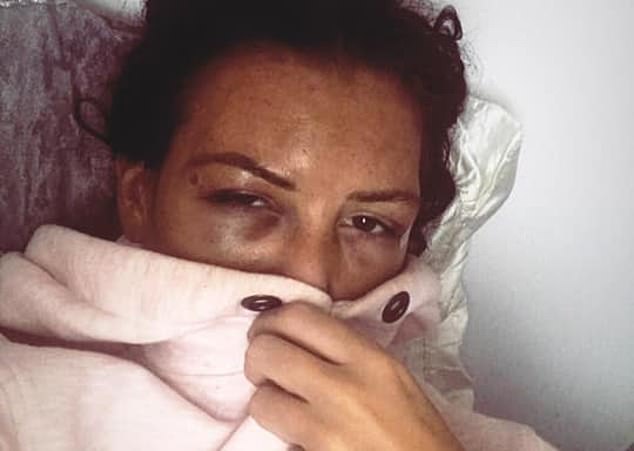 ‘It was completely unprovoked and the punching was relentless, even when I was unconscious. He was still hitting me when I came round.’

The yob – who has a conviction for stalking – refused to speak to officers at the station and was ‘aggressive’ with officers, prosecutor Paul Anderson previously told South Tyneside Magistrates’ Court. But he admitted the beating a day later.

Bushell was subject to the restraining order so Ms Gallagher could have space with a view to making their relationship work. 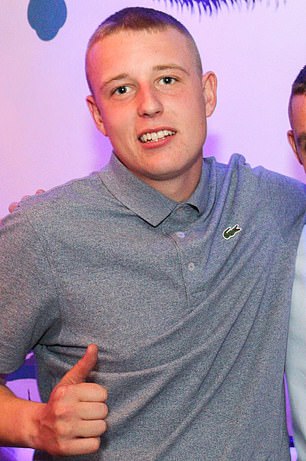 But she left him after the beating, which followed a history of pestering and violence.

Judge Mallett said Bushell was ‘totally out of control’ when he attacked Miss Gallagher and added: ‘She thought she was going to be killed.’

The court heard Bushell received injuries himself in an altercation after the attack.

After his arrest he made threats to police officers, saying he hoped their wives were raped and making comments about their children.

Tony Hawks, defending, said Bushell had been ‘drinking and taking cocaine’ and was naked during the attack as he had got into bed at the house.

Mr Hawks added: ‘He knows he’s behaved in a completely despicable manner. He is remorseful, he is disgusted by his behaviour.

‘He feels he has let his family down. They are a respectable family and not used to having their son in a public court, let alone facing a significant prison sentence.

‘He wants to come out and put his life back together. This has been a serious wake-up call for him.’

Bushell has now been banned from contacting Ms Gallagher indefinitely. He breached two restraining orders against two former partners, sent Ms Gallagher unwanted texts, turned up at her address twice and caused £200 of damage to her French doors.

His nine previous convictions and was also subject to another order at the time of the beating. The order aimed to enable him to ‘build better relationships’. He pleaded guilty to ABH and harassing, pestering or intimidating the victim.