‘My lawyer was telling me no, but my ego was telling me yes’: SNL tackles R Kelly’s unhinged interview with a VERY patient Gayle King who quizzes him on his alleged sex tapes with minors then mocks his post-bail McDonald’s and ‘crisis manager’

Saturday Night Live pushed the boundaries with a parody of this week’s unhinged CBS interview with R Kelly.

Kenan Thompson took on the role of the embattled R&B star opposite a very patient Gayle King played by Leslie Jones.

Jones’ King refers to him as ‘the individual who number ones’ – a cheeky reference to an alleged sex tape in which Kelly urinated on a woman – and he responds by asking to be called ‘victim’.

The pair discussed the allegations against Kelly in real life, as the artist is facing 10 counts of sexual abuse involved four women, three of whom were underage at the time.

He goes on to complain that the bombshell documentary series Surviving R Kelly, which detailed the musician’s long history of abuse, painted him as ‘the devil’.

‘I’m not the devil, and even if I was, you can’t say one nice thing about the devil?’ he asks.

The skit also made multiple references to the fact that Kelly is illiterate, as his SNL version says: ‘Look, I made a lot of mistakes in my life. I can’t read or write … but I’m still a person. I pull on my pants one sleeve at a time.’ 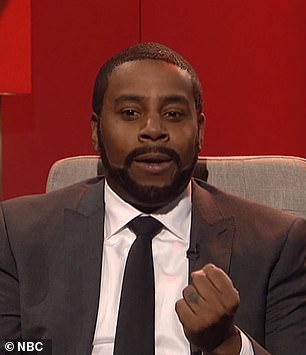 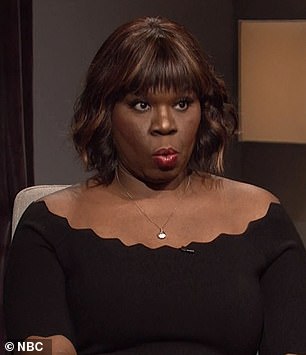 Kelly and King pair discussed the allegations against Kelly in real life, as the artist is facing 10 counts of sexual abuse involved four women, three of whom were underage at the time 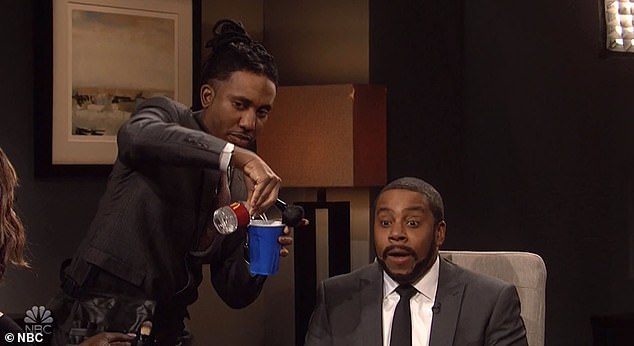 Chris Redd played Kelly’s crisis manager, who stepped in to pour him a glass of water with a McDonald’s label in the middle of the interview

The show came hours after Kelly was released from jail when an anonymous donor paid the $181,000 he owed in child support.

It poked fun at the fact that Kelly was seen stopping by a McDonald’s after his release as Thompson’s version made several mentions of his financial problems.

In the middle of the interview, Kelly’s ‘crisis manager’ – played by Chris Redd – steps in to pour him a cup of water from a bottle with a McDonald’s logo and assures him that the interview is going great.

Just as Kelly had done in the real interview, Thompson stood up and waved his hands exaggeratedly as he defended himself to King, who was praised for keeping her composure when the actual outburst went down.

Several of the lines were pulled straight from the real-life interview, with minor modifications, such as this one: ‘How stupid would it be for me, R Kelly, with all the crazy legal things I did on tape, and I got away with, scot-free, to do it again?’