So which tier will YOU be in? Sussex and Hertfordshire saw biggest spike in Covid cases

East Sussex, Herefordshire and Milton Keynes were the local authorities in England that suffered the biggest spike in coronavirus cases during the most recent week, official data has revealed.

Public Health England statistics show infection rates — the number of new coronavirus cases per 100,000 people — shot up by at least 50 per cent in all three areas in the seven-day spell ending November 15. The ten areas that saw the biggest drops were all in the North.

Boris Johnson last night confirmed the country’s second draconian lockdown will end on December 2, with No10 opting to return to a revamped three-tier system that could have to remain in place until at least March 31 — more than a year after the first lockdown began.

Ministers are waiting for the most up-to-date data to decide what brackets individual authorities will be placed in, with the breakdown set to be published on Thursday. Policymakers will analyse rates on infections, test positivity and speed of growth to decide on the measures.

The worst-hit areas including Hull and the North West are expected to be placed under the toughest Tier Three, which forces restaurants and pubs to shut — unless they offer takeaways.

Debate rages on over which bracket London should be in, with the capital’s mayor Sadiq Khan predicting the city will face Tier Two — which bans mixing indoors with other households. But senior Tories including Sir Ian Duncan Smith last night demanded the city, the beating heart of the UK’s economy, is put under Tier One.

Northern mayors have voiced opposition to plans to put them into higher tiers, with Greater Manchester’s Andy Burnham saying they could trigger ‘widespread business failure’ in the region. MPs have warned T2 and T3 will be ‘catastrophic’ for businesses and spark a damaging new mutiny.

Whitehall sources told the Daily Mail last night that very few areas would be afforded Tier One restrictions, with only the rural regions — such as Cornwall and South Oxfordshire — likely to see the lightest rules applied. 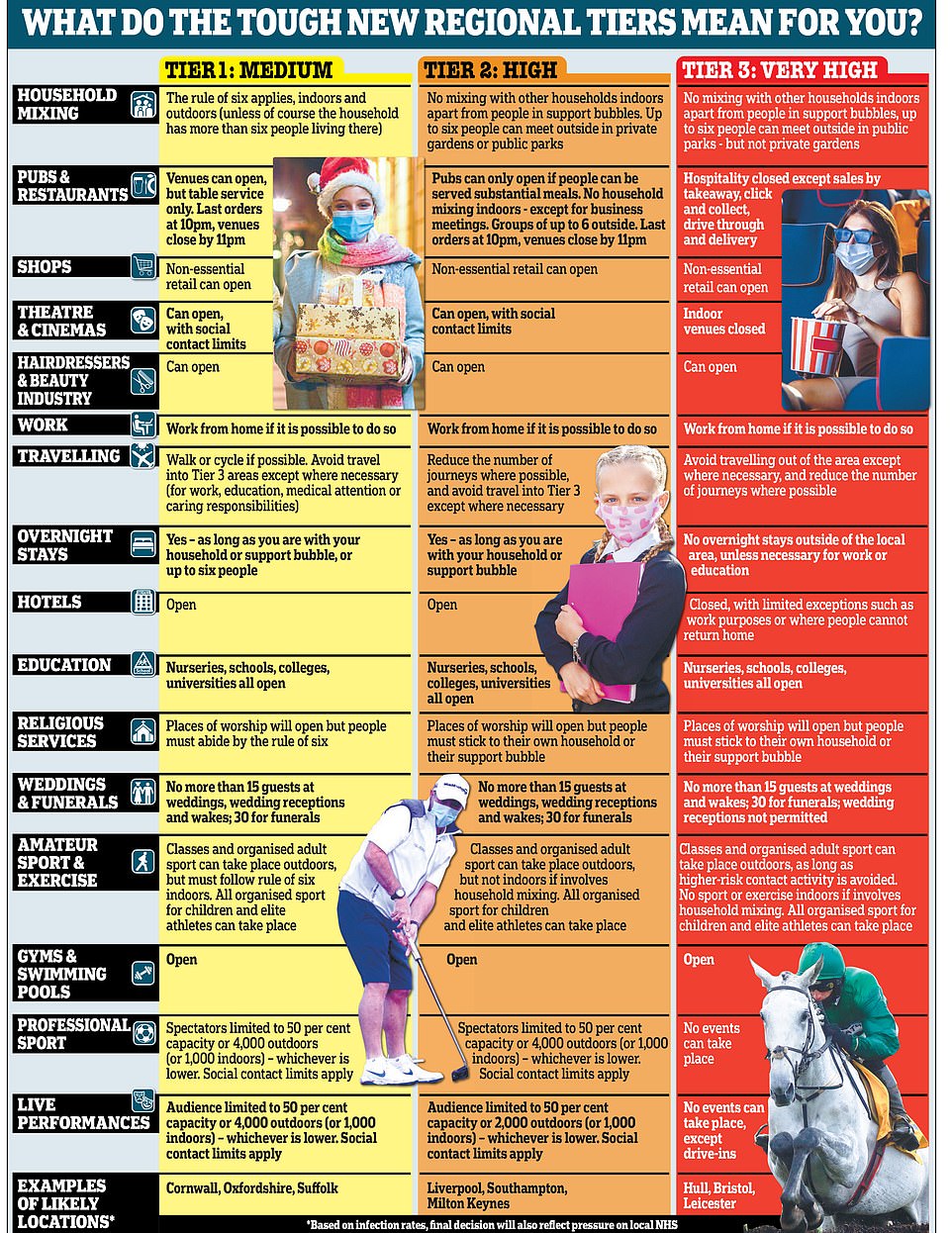 The onerous tiered system will be in place across England from December 3 until the end of March, the Prime Minister said 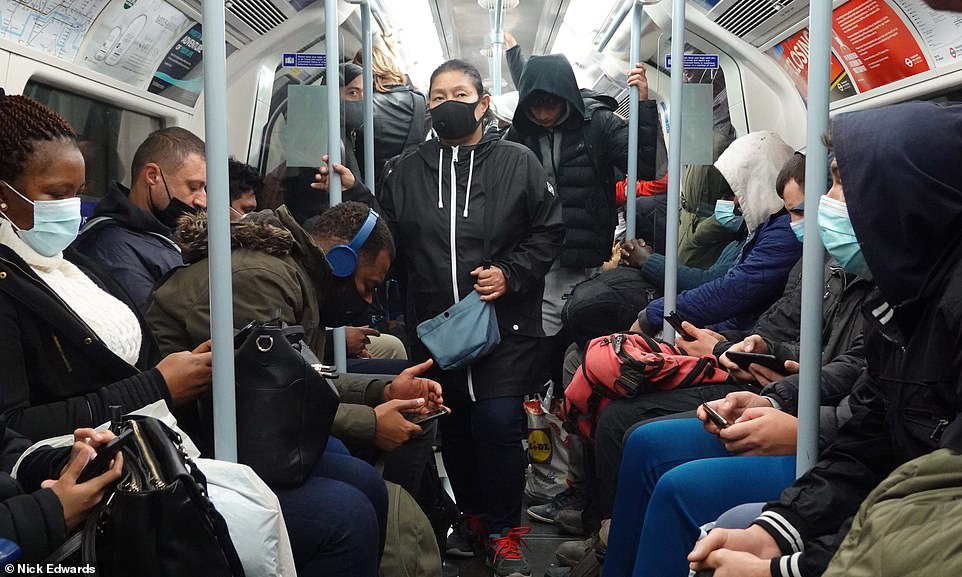 Which local authorities have the highest Covid-19 infection rate?

The above data is based on Public Health England’s surveillance report on the seven-day spell up to November 15, the latest for which data is available.

This is less than two weeks after England’s lockdown was imposed, meaning it does not show the impact of the lockdown as it takes up to two weeks for someone infected with the virus to start to show symptoms and then test positive.

The Prime Minister warned last night: ‘We expect more regions to fall, at least temporally, into higher levels than before but by using these tougher tiers and by using rapid turnaround tests on an ever greater scale to drive R below one.’

But he added the toughened tiers should make it possible for local authorities ‘to move down the tier-ing scale to lower levels of restrictions’ as cases start to plummet.

The previous system was heavily criticised for areas being put into Tier Three, and then seemingly having no way out of the curbs.

Politicians and local leaders are today gathering to mount substantial challenges to the restrictions.

In the capital, Tory heavyweight Sir Ian has told the Telegraph that it ‘must’ be placed in Tier One to revive the country.

‘London is dominant in the economy and we need it to get back to work immediately,’ he said.

Another London MP told the Guardian they were ‘fiercely lobbying’ for pubs, bars and restaurants to be re-opened in the capital.

Sadiq Khan told LBC yesterday: ‘It’s a bit early to say yet, but based on the numbers that I’ve seen, which is a slowdown in the virus spreading, it’s coming down in parts of London in a couple of boroughs.’

‘What I hope would happen is… London would probably be in what is called Tier Two.’

None of London’s boroughs have a Covid-19 infection rate below 100 cases per 100,000 people, according to Public Health England figures from the seven-day spell ending November 15, the latest date for which data is available.

But in 20 of the 32 boroughs the infection rate rose last week, with the biggest jumps in Havering, Enfield and Redbridge.

The highest infection rate is in Havering, in the north-east of the city, the only borough where they surged above 300 per 100,000.

The number of patients being rushed to hospital in the capital suffering from Covid-19 remains low, according to the Department of Health, at a seven-day average of 154.7 admissions on November 17. But this is far below the peak of the first wave, when on average 748 patients were being taken to hospital with Covid-19 every day.

These levels are also among the lowest in the country, which ministers are expected to argue mean that London can be spared the sharpest curbs on public freedoms.

Which local authorities have the highest surges in Covid-19 infections?

The above is based on Public Health England’s surveillance report on the seven-day spell up to November 15, the latest for which data is available.

This is less than two weeks after England’s lockdown was imposed, meaning it is unlikely to show the full impact of the tightened curbs as it takes two weeks for someone infected to get hospitalised.

Mayors in the North of England are also mounting opposition to yet again being placed under higher tiers, with Sheffield city leader Dan Jarvis warning: ‘We’re willing to do our bit, but we must not be taken for granted.’

He added: ‘Tougher restrictions have had a massive impact on South Yorkshire’s economy.

‘The Government said it will return to its levelling up agenda after the pandemic, but the brutal reality is we cannot wait that long.

‘At Wednesday’s Spending Review, the Government has a golden opportunity to deliver on its promises.

‘I’ve pressed Ministers to bring forward major investment, to give the North the best chance of weathering the storm, ensure businesses survive a tough winter and allow us to kick start the job of economic recovery and renewal.’

Greater Manchester’s mayor Andy Burnham has come out hard against being plunged into the toughest measures.

Mr Burnham said a toughened Tier Three ‘could be devastating for the hospitality industry and will hit cities and the city economy very, very hard indeed’.

Local leaders there have spoken of their ‘frustration’ that residents appear not to be following restrictions, and taking simple precautions such as wearing a face mask.

An emergency council meeting was held yesterday to discuss why the district – which is home to about 150,000 and includes the Isle of Sheppey – has seen such rapid growth of the virus.

The latest analysis of PHE figures, by the Press Association news agency, found Covid-19 case rates started to fall in most local areas across England in the most recent week, up to November 15.

Only two of nine regions – London and the South East – are still recording week-on-week rises in cases. The full impact of England’s second national lockdown, however, is yet to become apparent in the data.

It takes up to two weeks for someone who has caught the virus to show symptoms, get tested, and receive a positive result. This means that many infections currently being reported may have occurred before the emergency measures were brought in.

But the latest figures suggest the numbers are heading in the right direction, though not in all parts of England.

The nationwide restrictions began on November 5, and the most recent figures are for the week ending November 15 – just 14 days into the lockdown. 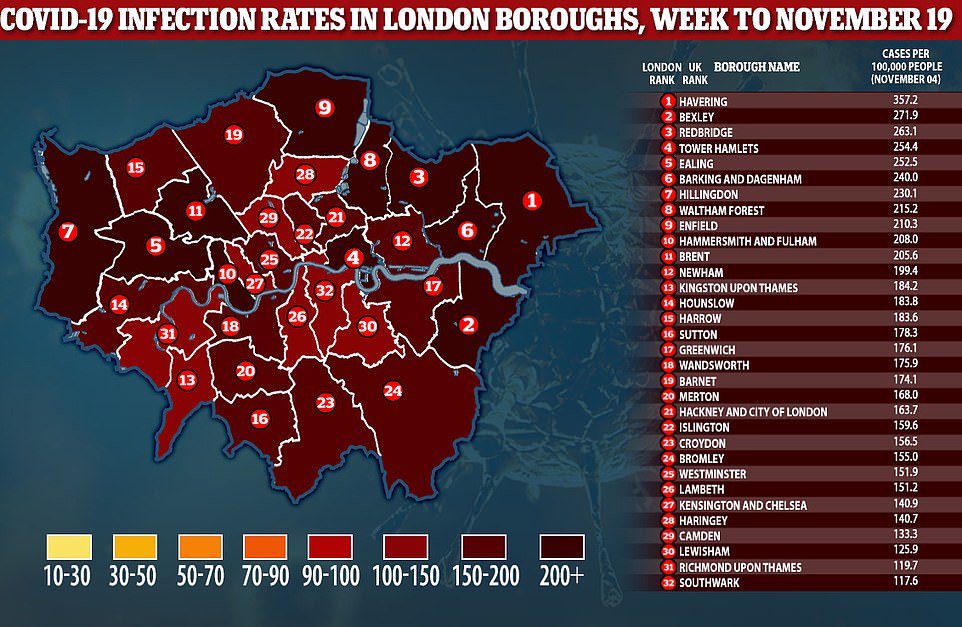 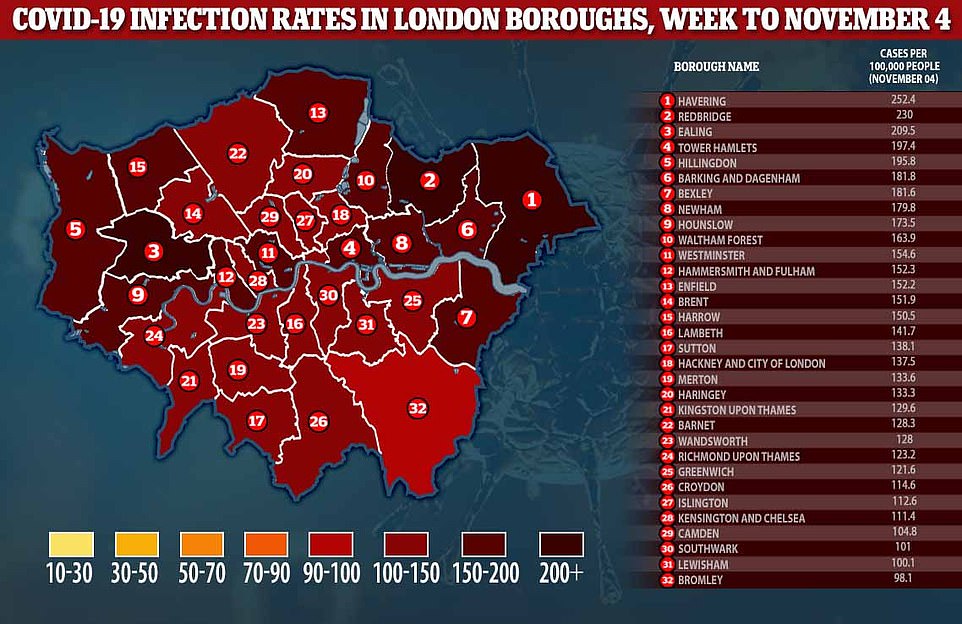 Two weeks ago the average infection rates were lower than today – but the worst-hit London boroughs are still outside the top 100 in the league table of 317 authorities in England, Department of Health statistics show 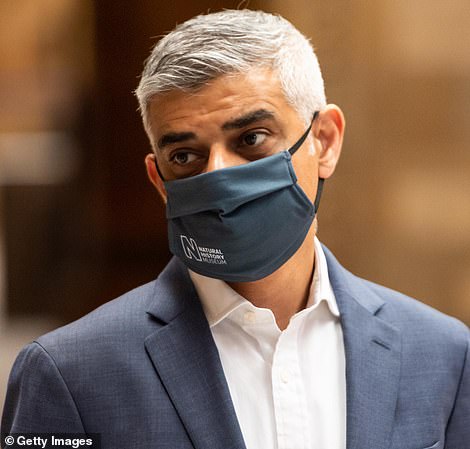 Infection surges were recorded in 34 out of 67 local authorities in the South East, with Medway seeing the biggest jump.

But the biggest week-on-week falls were recorded in the North West – signalling that earlier measures were helping to drive down cases alongside the lockdown.

When the tiered system returns on December 3, they will be reviewed every two weeks to establish whether local authorities need to have stricter curbs imposed or can be dropped to lower restrictions.

It is set to be in place until March 31, at which point the tiered system will come to an end.

Boris Johnson said last night that he hoped the country would be able to get back to normal ‘by Easter’, predicting this could be when the elderly and most vulnerable members of the population will have received a Covid-19 vaccine.

Three vaccines – including Oxford’s jab – have said they are at least 70 per cent effective at triggering an immune response, prompting Labour leader Sir Keir Starmer to say ‘the end of the tunnel’ of the pandemic is in sight.

Leaked NHS plans reveal they could start vaccinating the elderly and most vulnerable against the virus in early December, with vaccines being rolled out to the rest of the population in the new year.

But scientists have urged caution, warning none of the jabs have yet been approved for use by the UK’s regulator the Medicines and Healthcare Regulatory Agency (MHRA).

The regulator reviews data on vaccine effectiveness and how safe it is before deciding whether or not to allow it to be administered across the country. It is a process that usually takes two years but, amid pressure to get life back to normal, the regulator has said it is working hard to make a decision quickly.

The Prime Minister detailed his winter strategy yesterday, with a plan to deploy a major testing scheme in an attempt to win over rebels on the Conservative backbenches.

He told tell MPs that non-essential shops can open in all three tiers after the current restrictions expire on December 2, in a boost for retailers.

Mr Johnson also set out the basis of plans to allow a small number of households across the UK to mix over a limited number of days around Christmas. 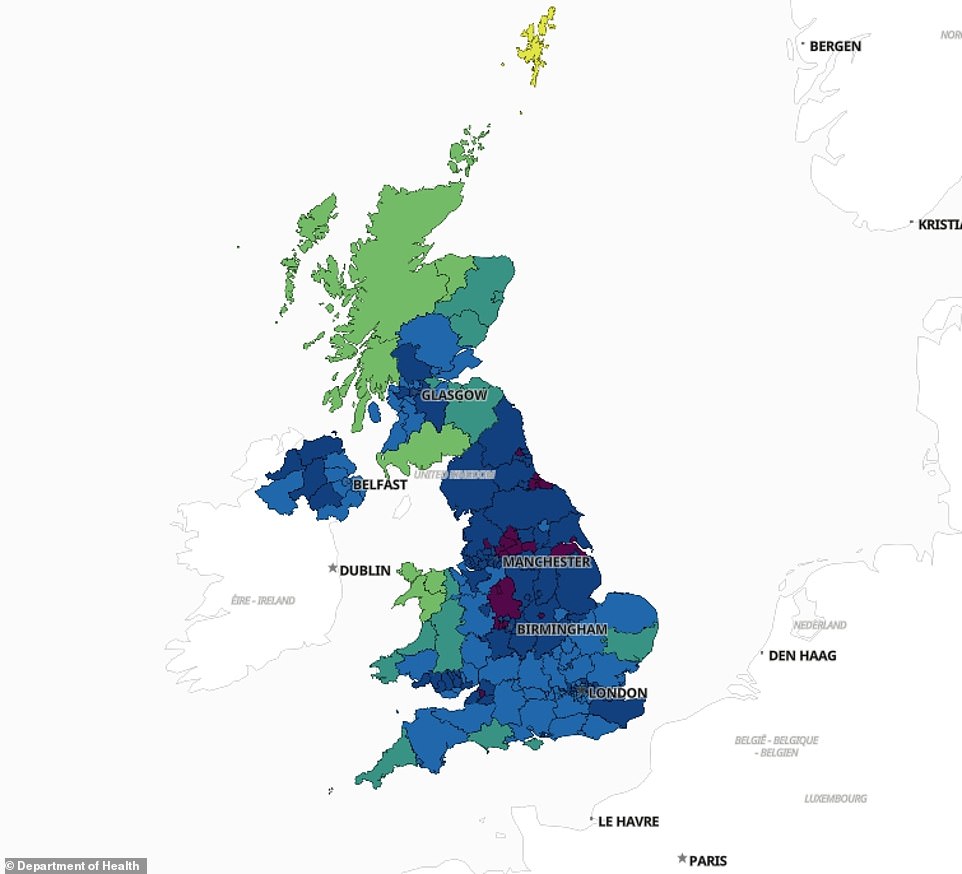 Official testing data shows that coronavirus infection rates are falling across the North of England, where they were highest during the peak of the second wave, but they remain high in some areas of the West Midlands, Kent, Greater Manchester and Yorkshire (Darker colours indicate higher rates of positive tests per 100,000 people) 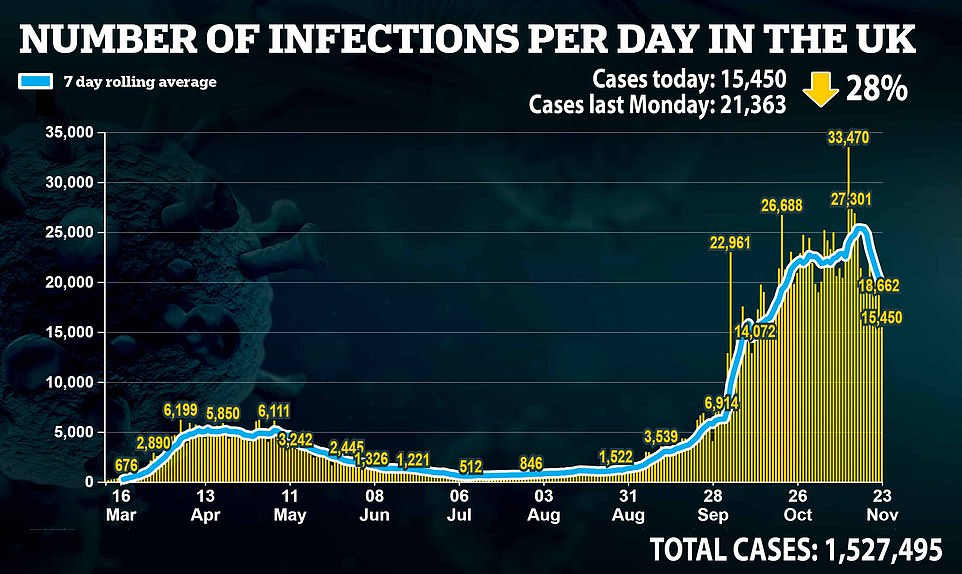 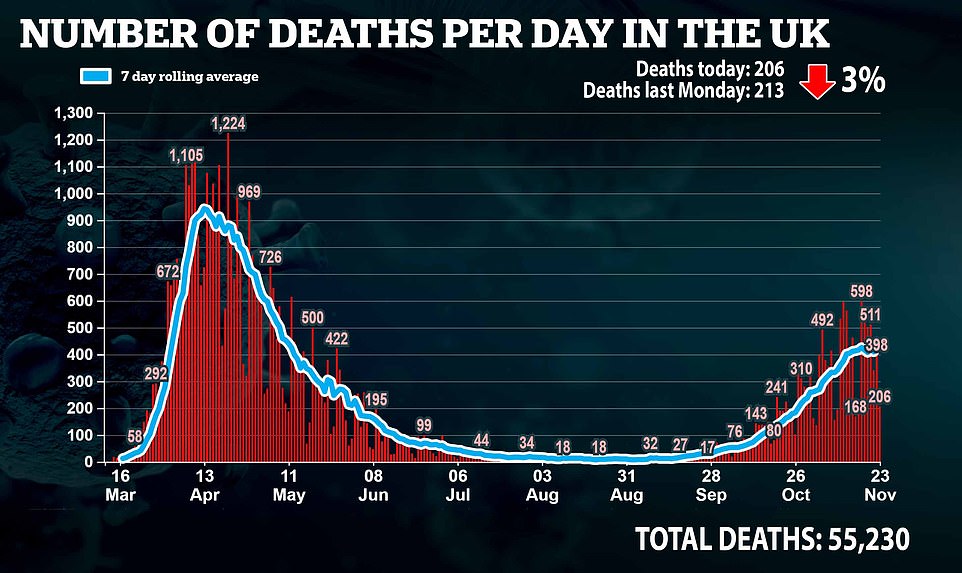