Sip on that one! Soccer star Sam Kerr’s brother Daniel skols a beer in support of his sister after she slammed the ‘haters’ who criticised her same-sex relationship

Soccer star Sam Kerr’s brother has shown support for his sister in a unique way after she was criticised for a post-match interview in which she told the ‘haters’ to ‘suck on that one’.

A video was posted to Twitter showing Daniel drinking the beer in the forecourt of a bar as he is cheered on.

One woman was heard telling him ‘don’t you skol that’.

Daniel Kerr was wearing a T-shirt with his sister’s quote emblazoned on it.

Sam Kerr was criticised for her comments after leading Australia to a come-from-behind 3-2 win over Brazil in the World Cup.

‘There were a lot of critics talking about us but we’re back. So suck on that,’ Kerr said.

‘Look at that performance to come back from the deep.

‘We don’t listen to the haters… You can see what it means to us and we’re back in it.’

Commenters took to social media to slam Kerr for her post-match interview. 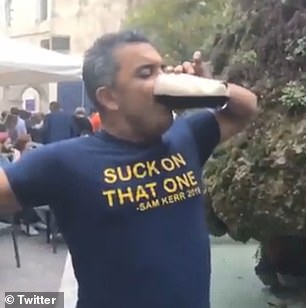 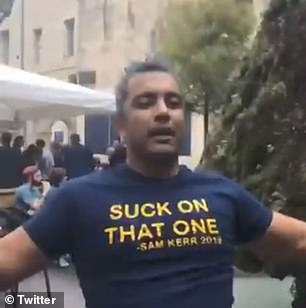 ‘You are going to get critics. It’s part of being a professional athlete. And life. If you cannot deal with it, we will find someone who can. And, someone who conducts themselves in a way my daughter can look up to,’ one person wrote.

Kerr was also subject to viscous trolling after the game and her hit out at the ‘haters’.

‘By the way your dyke a** was offside,’ a troll tweeted at Kerr. 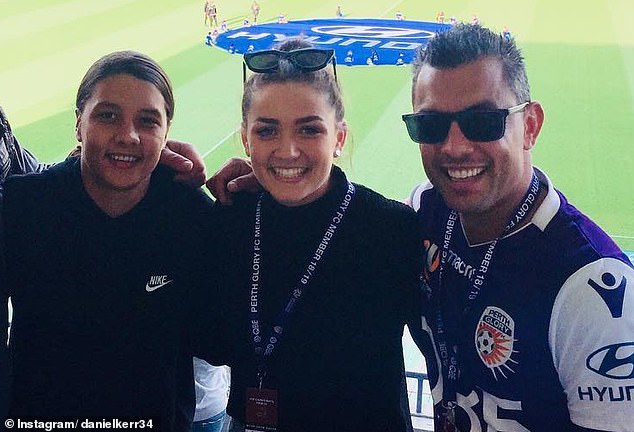