Too knackered to be excited! You’d never know Mathew Leckie just scored one of the Socceroos’ greatest goals as he can hardly raise a smile in Today interview

Socceroos hero Mat Leckie is renowned for his humble nature – and it was clearly evident in an interview with the Today Show on Thursday morning.

Leckie, 31, scored the winner for Australia against Denmark to seal a spot in the round of 16 at the World Cup – and was ‘absolutely knackered’ in a post game chat outside the Al-Janoub Stadium in Doha.

The Melbourne City winger spoke to co-hosts Ally Langdon and David Campbell plus sports reporter Alex Cullen – and it is safe to say Leckie didn’t match their collective enthusiasm after the trio were dancing around in the studio before the live cross.

When pressed on his thoughts surrounding the epic result, an understated Leckie pointed to collective belief among the squad.

‘From day one we felt we could get the result,’ he said. 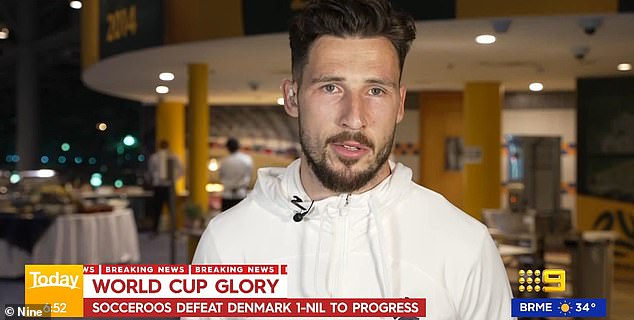 ‘We wanted a win, we were never going to play for a draw, that isn’t part of our mentality.

‘We are all absolutely knackered, we left everything on the pitch.’

Leckie also paid tribute to the frenetic scenes at Federation Square in Melbourne, where Socceroos fans have been out in force.

‘To create that kind of atmosphere, it makes us very proud and it is great to see the nation behind us,’ he added.

Australia next take on the might of Argentina on Sunday from 6am (AEDT) – and their superstar Lionel Messi. 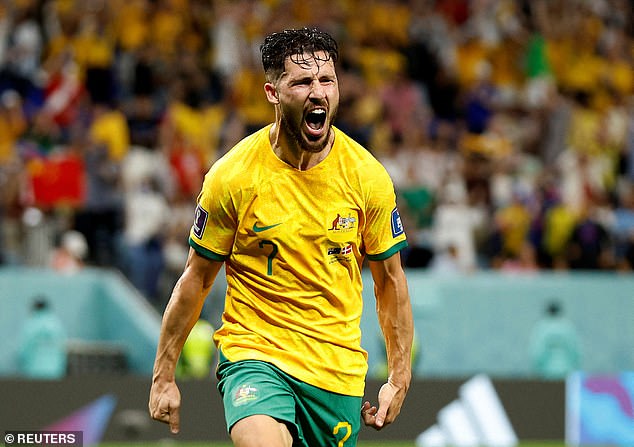 Leckie confirmed the Socceroos won’t go into their shell against the South American giants, who beat Poland 2-0 to top their group.

‘Our mentality won’t change, we will look to be positive,’ he said.

‘We always believed we could create something special as a group, we showed our fighting spirit.’

Australia have never played Argentina at a World Cup – but many supporters will recall football icon Diego Maradona inspiring the Albicelestes to victory over the Socceroos in two qualifying matches ahead of the 1994 tournament in the USA.

Kick-off on Sunday morning in the knockout clash is 6am (AEDT).