The Socceroos will head to the World Cup as winners after a youthful side overcame New Zealand 2-0 in their final friendly ahead of Qatar.

Graham Arnold blooded a pack of youngsters at Auckland’s Eden Park – a venue the Wallabies famously haven’t won at since 1986 – but the squad’s oldest outfielder, striker Mitch Duke, grabbed the first goal.

Jason Cummings then converted a penalty after fine work from fellow debutant Garang Kuol, giving Arnold plenty to think about as he mulls his World Cup squad. 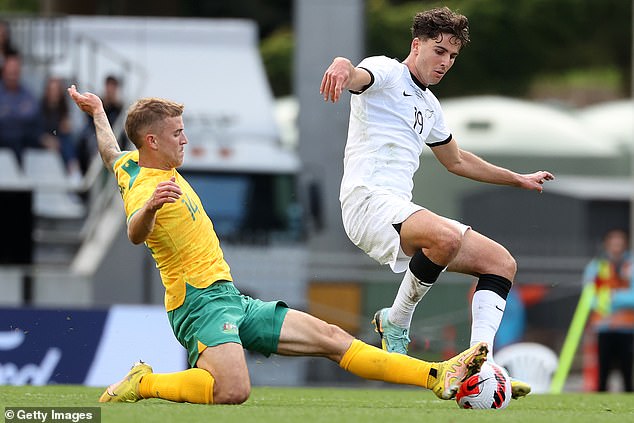 With Thursday night’s XI that beat the All Whites 1-0 spared the trip to New Zealand, Arnold said he wanted to use the match to find his ‘Plan B’ for Qatar.

He offered Harrison Delbridge a full debut while Kuol, Cummings – aka the Cumdingo – Ryan Strain, Cameron Devlin, and Keanu Baccus all got their first taste of senior international football.

The match might have been a friendly but there was plenty at stake for both sides.

The Socceroos, two months out from Qatar, were each competing for places in the 26-man squad, while the All Whites were playing at home for the first time in five years.

It was surprising then that the first half was so tepid; perhaps the result of nerves, or playing on a surface chopped up by Saturday night’s Bledisloe Cup Test.

Disappointingly for the bumper crowd of 34,985, hometown hero Chris Wood was taken off after half an hour, complaining of a side strain. 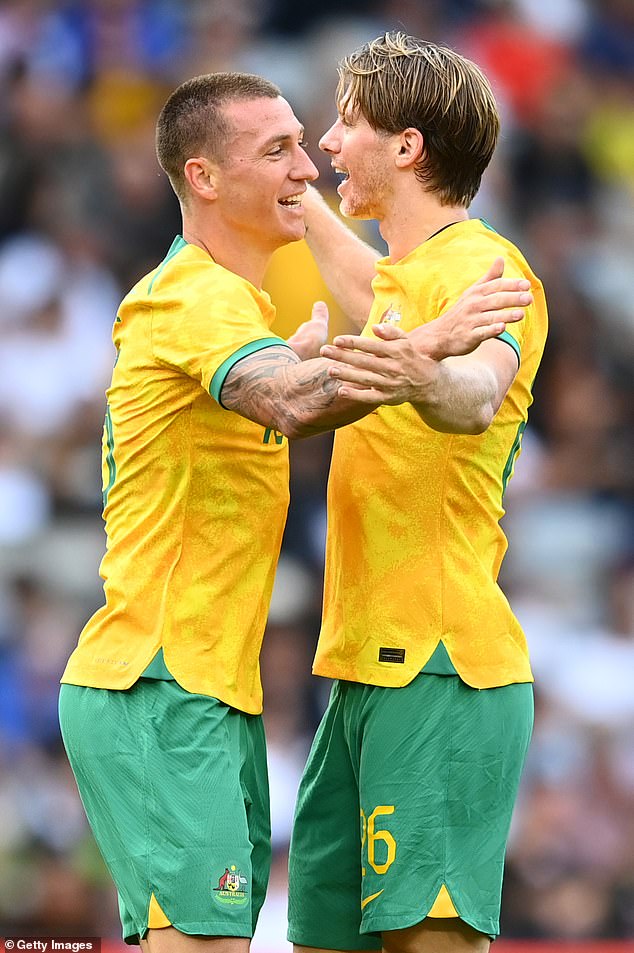 The Newcastle United striker spent his afternoon signing autographs for fans, rather than playing for them.

The Socceroos were inexperienced but had time on the field previously; eight of the team were past or present Melbourne City players, while nine featured in Australia’s 2-0 defeat of Argentina at last year’s Olympics.

Despite the links, there was little understanding shown between teammates in a stop-start first half.

Oli Sail had one save to make – an early effort from Riley McGree’s drive – as Australia struggled for industry or creativity.

Nathaniel Atkinson and Mat Leckie provided an outlet down the right, but to little effect, with Denis Genreau particularly wasteful in the middle. 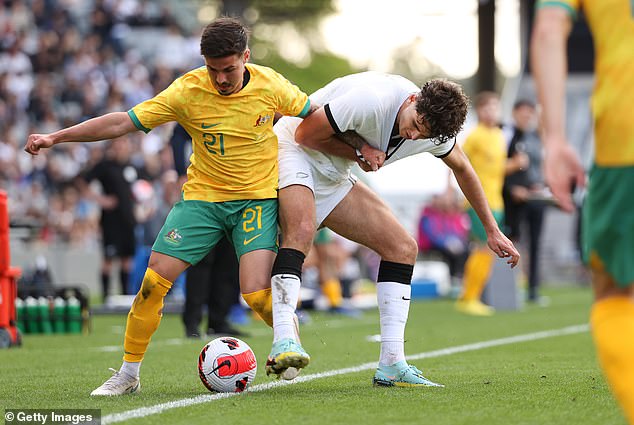 Marco Tilio produced a horror miss as halftime loomed, sidefooting wide with the goal at his mercy after Duke’s centre.

After a lacklustre first 45 minutes, the Socceroos returned full of spark.

Tilio drew a fine save from Sail before Connor Metcalfe served up a curling cross for Duke to head home on 54 minutes, giving Australia a deserved lead.

With five fresh debutants inserted into the contest, the game opened up, and Kuol helped win it with his pace.

The 18-year-old stole the ball in his own half and raced through on goal, the ball eventually falling to Cummings – whose shot was saved by the outstretched hand of Liberato Cacace. 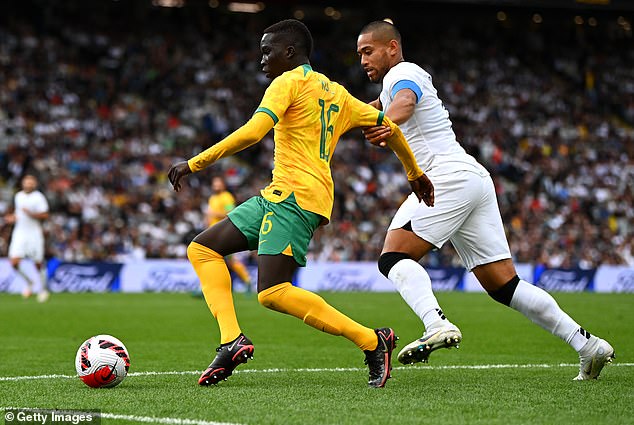 Cummings stepped up for the resultant penalty, dispatching it strongly to the bottom right corner, and perhaps booking his place to the World Cup.

Cummins explained afterwards how he felt on the park. ‘Absolutely buzzing,’ he said. ‘I was chomping at the bit. I just wanted to get on the pitch.’

Manager Graham Arnold was very happy with how the young team performed.

‘I’ll go back and review it and have a close look at things before I’d say publicly. But it’s just refreshing to see the young faces, their energy was fantastic. It’s great that they’re knocking on the door.

‘I wanted this to happen, I wanted to have [selection] headaches. I didn’t want to be sitting at home, and I’m thinking, ‘Oh, where am I going to get players from?’ They’ve shown me today, we can do it,’ said Arnold. 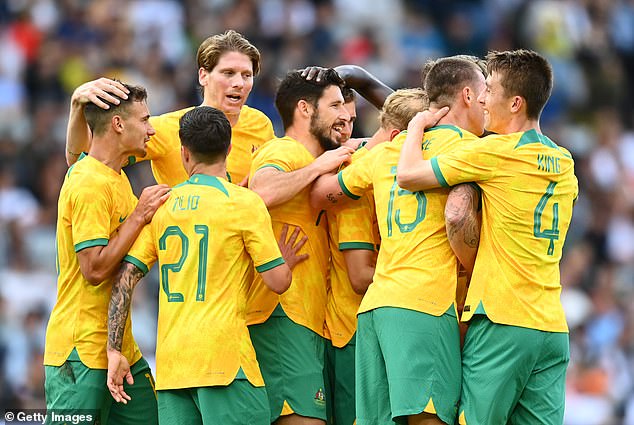 Socceroos fans on social media had largely positive things to say about the team’s performance – especially in the second half.

‘Interesting to see the mindset shift in the second half, need to see that aggressive line at the World Cup from the opening minute. Kuol and Cummings probably booked their spots alongside Devlin and Metcalfe,’ said one Twitter user.

‘Much better second half from the Socceroos, get Cummings and Kuol on the plane to Qatar!’ added another.

‘Seriously we need to get Mathew Leckie to Captain the Wallabies. First Aussie Capt to win at Eden Park in a while,’ joked a third.