Stress caused by lockdown is being blamed for a rise in the number of people suffering from high blood pressure.

At one hospital in Argentina, nearly a quarter of emergency patients admitted in the three months following lockdown on March 20 suffered from the condition.

This percentage is more than a third (37 per cent) higher than the comparative figure for the same three months in 2019, doctors reveal.

Dr Matías Fosco of Favaloro Foundation University Hospital in Buenos Aires led the study and said: ‘There are several possible reasons for the connection between social isolation and high blood pressure.

‘For example, increased stress because of the pandemic, with limited personal contact and the onset or exacerbation of financial or family difficulties.

‘Changed behaviours may have played a role, with higher intake of food and alcohol, sedentary lifestyles and weight gain.’

More than one in five adults in the UK suffer with high blood pressure, which is mainly caused by poor diet, stress and smoking and can lead to an increased risk of strokes, heart attacks and other chronic conditions.

Nearly a quarter of emergency patients admitted to an Argentine hospital during coronavirus lockdown between March 20 and June 25 suffered high blood pressure. Out of 1,643 patients, 391 (23.8 per cent) were found to have the condition

Mandatory social isolation measures to try and combat the spread of the pandemic came into force in Argentina on March 20 as a part of a general lockdown.

People were told to stay at home, except for essential workers such as doctors and nurses.

Much like in the UK and in other countries worldwide, Argentines were permitted to leave home only to buy food, medicine and cleaning supplies. Schools and universities closed and public events were suspended.

Study author Dr Matías Fosco said: ‘Admission to the emergency department during the mandatory social isolation period was linked with a 37 per cent increase in the odds of having high blood pressure – even after taking into account age, gender, month, day and time of consultation, and whether or not the patient arrived by ambulance.

‘After social isolation began, we observed that more patients coming to emergency had high blood pressure. We conducted this study to confirm or reject this impression.’

The frequency of high blood pressure among patients was compared to two previous time periods: the same three months in 2019 and the three months immediately before social isolation.

A patient’s blood pressure is taken as part of standard procedure and almost every person (98.2 per cent) admitted between March 21, 2019 and June 25 this year was included in the study.

Only 1,643 patients were admitted to the emergency department in this three-month window — a drop of more than half when compared to the three previous months and the same window in 2019.

During the social isolation period, 23.8 per cent of patients admitted to emergency had high blood pressure. 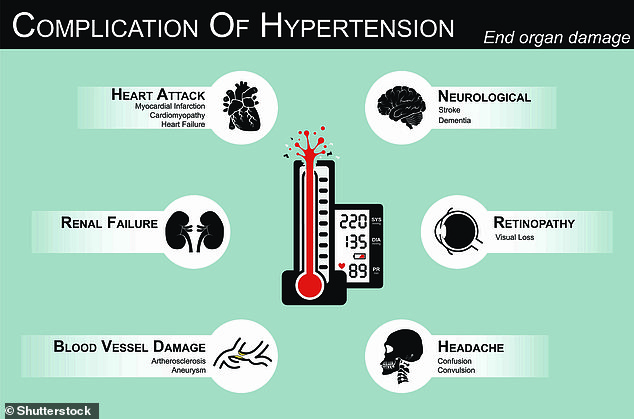 High blood pressure can have a catastrophic impact on a person’s long-term health, It has been linked to heart attacks, strokes, sight loss and kidney problems

This is significantly higher compared to the same period in 2019, when it was 17.5 per cent, and to the three months before social isolation, when it was 15.4 per cent.

Dr Fosco noted that the reasons for admission were similar between all three periods studied, so were not responsible for the increase in high blood pressure.

He told MailOnline patients were only tested for Covid-19 if they expressed symptoms and the study did not look at if Covid-19 symptoms were linked to high blood pressure.

‘Patients may have felt more psychological tension during transportation to the hospital because of travel restrictions and police controls and a fear of becoming infected with coronavirus after leaving home,’ he said.

‘In addition, patients being treated for high blood pressure may have stopped taking their medicine due to preliminary warnings about possible adverse effects on Covid-19 outcomes, which were later dismissed.

‘Many regulations related to the pandemic have now relaxed and we are investigating if this is reflected in the blood pressure of patients admitted to emergency.’

‘There has been a significant decrease in heart disease consultations, which inevitably leads to avoidable complications.’

WHAT DOES IT MEAN IF I HAVE HIGH BLOOD PRESSURE?