Shocked fans of Rick Moranis, the star of the star of Ghostbusters and Honey, I Shrunk the Kids, have flooded social media after he was sucker-punched in the head by an unknown assailant this week.

The horrifying assault was caught on surveillance camera and shows Moranis, 67, who is 5ft 6in walking southbound on Central Park West near West 70th Street at about 7.30am on Thursday morning.

Suddenly, an unidentified man in a ‘I love NY’ sweatshirt walking past the star strikes him in the head, knocking Moranis to the ground.

Authorities said that Moranis was recovering, but longtime fans have rushed to Twitter to share memes defending him and expressing outrage over the incident.

Rick Moranis, 67, was walking on New York City’s Upper West Side on Thursday around 7.30am when he was attacked. Surveillance footage captures a stranger walking past him abruptly punching Moranis in the head, knocking him to the ground (left and right)

The actor visited a local hospital with complaints of pain in his head, back and right hip. Pictured: Moranis at opening night for the Broadway play ‘In and Of Itself’, April 2017

‘The assailant may [heart] NY. But, I would suggest that after this, the feeling isn;t mutual,’ one person wrote in response to an NYPD tweet.

‘Let me find out who hit him,’ another user wrote. ‘Thar’s my favorite childhood actor. The man made Ghostbusters. Honey I Shrunk the Kids!’

A fan called the suspect ‘evil’ for the sucker-punch and said ‘Rick Moranis quit acting to care for his dying wife. The man is a sweet guy. Also, LITTLE SHOP OF HORRORS,’ they wrote in reference to the 1986 film.

A handful of people shared photos of the Marvel cast in Avengers: Endgame and compared their fury to the final showdown.

Fans of Rick Moranis took to social media to express their shock, outrage and disbelief over Thursday’s unprovoked attack 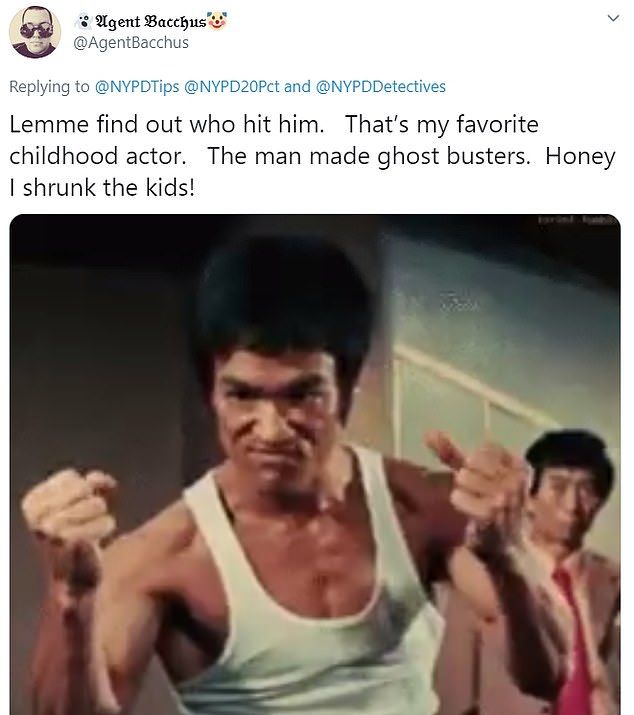 Several users said Moranis’ was their favorite childhood actor in films like Ghostbusters and Honey, I Shrunk the Kids 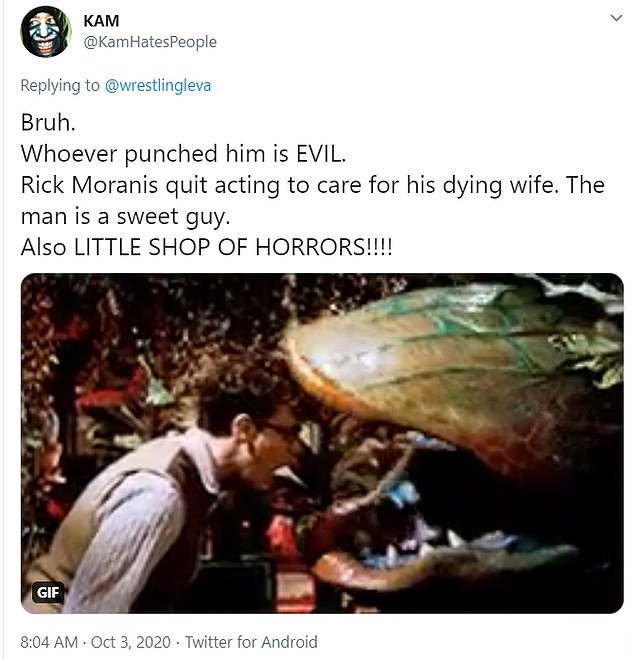 Twitter user; Bruh. Whoever punched him is EVIL. Rick Moranis quit acting to care for his dying wife. The man is a sweet man. Also LITTLE SHOP OF HORRORS

‘You come for Rick Moranis, you come for all of us,’ one person tweeted.

‘Twitter right now trying to find the man who attacked Rick Moranis,’ someone else added.

Amid the contentious US presidential election, one person suggested Moranis’ attack could unite the liberals and conservatives.

And others simply sent well-wishes and reminisced on some of their favorite childhood movies.

‘Hope Rick Moranis is okay,’ a person wrote. ‘And thanking him for years of amusement from Ghostbusters, the Honey I…movies and being half of Bob & Doug.’ 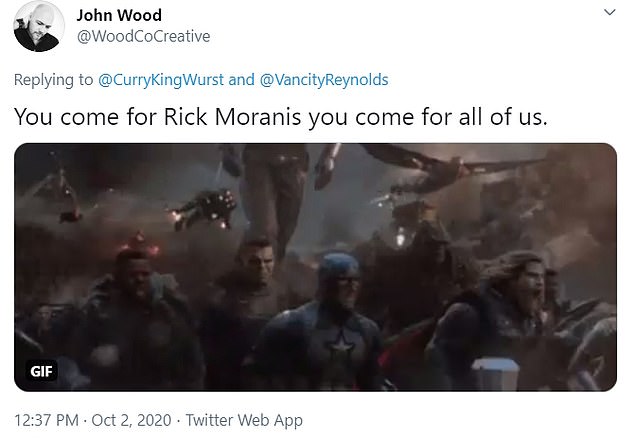 One Twitter user wrote, ‘You come for Rick Moranis you come for all of us’ after news of the unprovoked incident broke 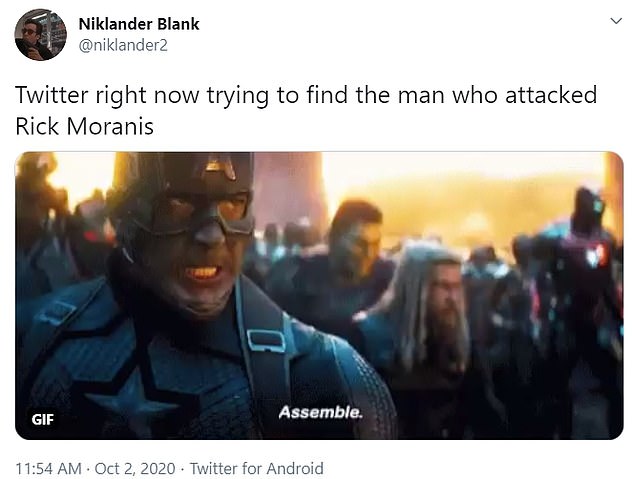 This person shared a photo of the final fight scene in Avengers: Endgame and captioned it: ‘witter right now trying to find the man who attacked Rick Moranis’ 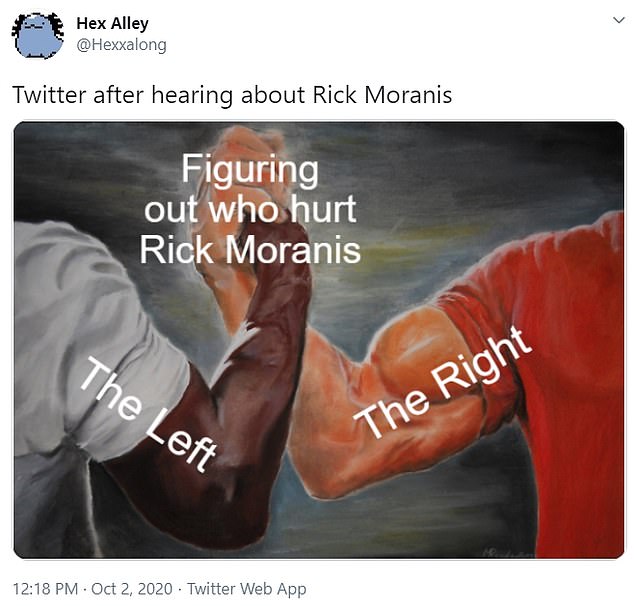 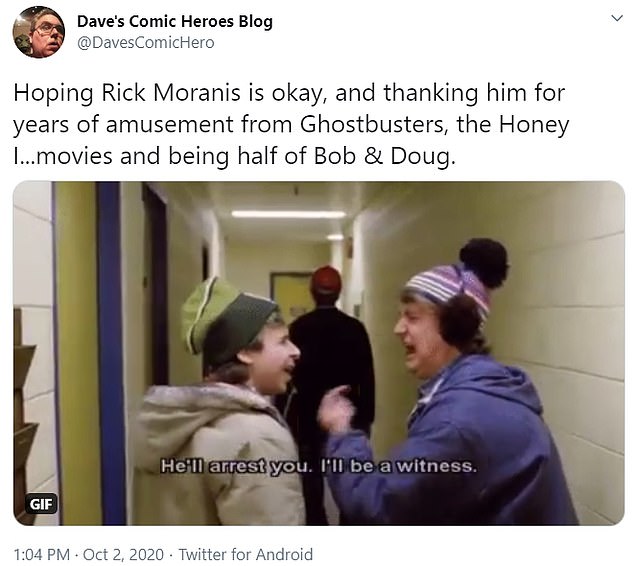 Some Twitter users used the opprotunity to recall some of their favorite Moranis movies, including Bob & Doug, Little Shop of Horrors and others

Celebrities also tweeted about their anger over the vicious attack and their well-wishes to Moranis.

Ryan Reynolds, who starred with Moranis in a commercial earlier this year, wrote: ‘Should have known not to subject Rick to the year 2020. Glad to hear he’s okay.’

And Chris Evans tweeted: ‘My blood is boiling. Find this man. You don’ touch Rick Moranis.’

A group of officers from the NYPD visited the actor at his home on the Upper West Side and then updated reporters on his condition following the unprovoked attack.

‘[Moranis] is doing well. He is strong. He is recovering,’ said Detective Kaz Daughtry, one of six cops with the NYPD’s new Community Affairs Rapid Response who visited the actor at his home on Friday afternoon.

‘He just wants us to catch the bad guy and all this to go away,’ the officer said.

‘He has some injuries to his left side,’ said Daughtry, explaining that Moranis has ‘some pain on the left side of his leg.’

‘At this moment, [Moranis] just wants to stay home, he just wants to recover, and he just wants, you know, peace of mind, and once he gets better, then he is going to go out and do his daily things that he usually does,’ Officer Jonadel Dorrejo added.

NYPD did not reveal the victim as Moranis in the tweet, but law enforcement later confirmed the identity.

It comes as crimes such as murder have risen 40 percent and burglary has risen 38 percent New York City compared to the same period last year as residents moved out amid the COVID-19 pandemic.

NYPD is offering a $2,500 award for any information that leads to the arrest of the suspect (pictured), who fled the scene on foot

After the attack, Moranis visited a local hospital, where he reported pain in his head, back and right hip. However, the extent of his injuries are unknown.

The actor then reported the incident to cops at the 20th Precinct.

The suspect, who was seen wearing a dark ‘I [love] NY’ sweatshirt, black pants and sneakers, fled the scene on foot and had not yet been apprehended.

On Twitter, the NYPD said it is offering a reward of up to $2,500 for the attacker’s apprehension.

Anyone with information about the incident is asked to call the Crime Stoppers hotline at 1-800-577-TIPS.

Tips, which are confidential, can also be submitted online or via Twitter by sending a message to @NYPDTips.

According to new NYPD statistics, some crimes have been up while others are down compared to last year.

Burglary and grand larceny auto have also risen, by 38 percent and 404 percent, respectively, compared to the same time period in 2019.

However, other crimes such as rape, assault and robbery have fallen by about a 33 percent, 115 percent and 149 percent, respectively, from last year, data shows.

Moranis, who was born in Toronto, Canada, secured his big break when he appeared in the 1983 film Strange Brew.

He then appeared in a string of commercially successful films including Ghostbusters in 1984, Spaceballs in 1987, and two films in 1989, Ghostbusters II and Honey, I Shrunk the Kids.

The original Honey, I Shrunk the Kids was so successful that Moranis returned for sequel Honey, I Blew Up The Kid in 1992.

He completed the trilogy with straight-to-video sequel Honey, We Shrunk Ourselves in 1997 which was his last on-camera role before his hiatus.

Moranis has largely remained out of the spotlight since, only doing voicework for a few animated projects including the 2003 film Brother Bear and TV series The Animated Adventures Of Bob & Doug McKenzie.

He said he made the decision to step away to focus on being a single father to his children, Rachel and Mitchell, after losing his wife, costume designer Ann Belsky, to breast cancer in February 1991.

He told USA Today: ‘As a single parent and I just found that it was too difficult to manage to raise my kids and to do the traveling involved in making movies.

Moranis said he took a break from acting to focus on being a single father after his wife died in 1991. Pictured: Moranis in an interview for Disney+

The premise of the sequel Shrunk concerns Moranis’s character’s now-grown son accidentally shrinking his own children. Pictured: Moranis at an unknown location, May 1994

In February 2020, The Hollywood Reporter revealed Moranis would be reprising his role as Wayne Szalinski in Shrunk, a new sequel in the Honey, I Shrunk the Kids series.

It is the first live-action film the actor is starring in in 23 years.

The premise of the film centers around Szalinski’s now grown-up son, portrayed by Frozen star Josh Gad, who repeats the same mistake of shrinking his own children.

In a clip for Disney+ (via Entertainment Weekly), Moranis praised the director of the original film Joe Johnston.

‘He had the vision of this in his head. And on that movie, I was really an actor,’ he said.

‘I think I drove him crazy a couple of times trying to get more comedy into it ’cause I was always looking for how to disrupt and get some more jokes in, and poor Joe just wanted to make his movie.’