Twitter user Oonagh Ryder, from London, shared snaps of the sign placed by boxes of sanitary towels and tampons which read: ‘Help us build safer communities – report shoplifting to a member of staff.’

It quickly provoked a reaction, with commenters saying they would likely ‘turn a blind eye’ if they saw people stealing the feminine hygiene products, while others called the sign’s placement ‘nasty.’

One agitated user wrote: ‘If you see someone shoplifting tampons, they obviously really need them – just give them a  pack. Jeez.’

Social media users were left in uproar after Twitter user Oonagh Ryder, from London, shared a photograph of a ‘report shoplifting’ sing in the sanitary products section of a Tesco supermarket

Tampons, pads and menstrual cups are available free to primary and secondary pupils at schools that have opted into a government scheme.

But research has suggested that as many as a quarter of women have been forced to miss work or school because they cannot afford period products.

Sanitary products, which are classed as a ‘luxury, non-essential item’, are subject to a 5 per cent tax, although some retailers have absorbed the cost to make them cheaper for customers.

A Tesco spokesperson told MailOnline: ‘We want everyone to feel welcome in our stores and are very sorry for any offence caused by the placing of the signs in this store.

‘We know that the cost of buying essential sanitary products can be a real struggle for some, which is why we were the first retailer to cover the cost of the ‘tampon tax’ to make these items more affordable.’

Twitter user Oonagh started the conversation after tweeting a snap of the sign yesterday, which had been placed between sanitary towels and tampons on a shelf in Tesco.

She wrote: ‘We really need a genuine conversation as a society about what ‘safety’ means.’

The tweet quickly went viral, with thousands of social media users weighing in with their opinion on her post.

One commented: ‘Sanitary products should be free for anybody who menstruates.’

Another wrote: ‘Women, trans men, or anyone who menstruates should not have to worry about being reported for taking a necessity that I personally believe should be free.’

‘For me, a ‘safer’ society is one where people wouldn’t need to steal things like sanitary products,’ another person added.

One wrote: ‘To be honest, if I saw someone robbing tampons, I’d assume they were hard up and turn a blind eye.’

Another added: ‘Placing on sanitary products is particularly nasty.’ 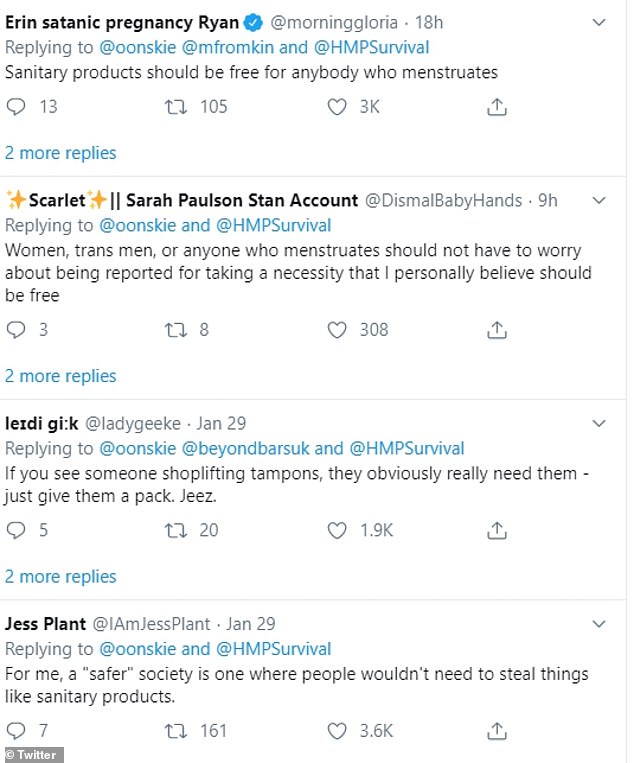 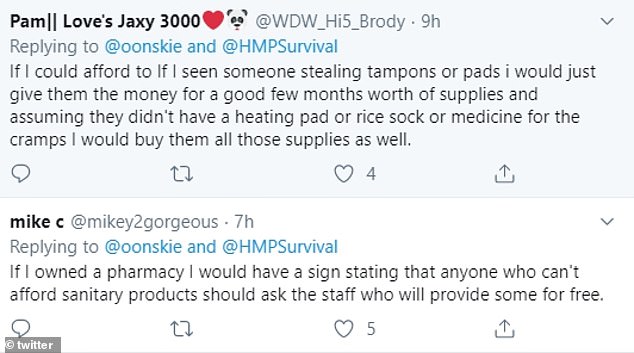 Social media users outraged by the sign, with many commenting that if they saw somebody shoplifting tampons they would ‘turn a blind eye’

‘Wow,’ another person wrote, ‘I’ll be turning a blind eye, as should any decent person.’

But others suggested the sign had perhaps fallen from a shelf with more expensive products, and replaced in the incorrect section.

One wrote: ‘To be honest, I’m 50 per cent sure somebody took that from a different shelf and put it there purposely…mostly because they’re not on that aisle, and secondly, it’s not on the shelf properly.’

Another wrote: ‘We all know tampons and pads are taxed too much, and are too expensive and it’s absolutely wrong. But [so is] taking a sign from another shelf and taking a photo of it here. Put pressure on your MPs to get the tax eradicated.’

Meanwhile other users were skeptical of the photograph, with some suggesting the sign could easily have been placed on the wrong shelf