Maurice Amon, 64, and Tracey Hejailan-Amon, 47, are in a bitter divorce battle

A socialite who allegedly ruined her husband’s priceless art collection while blowtorching his safe has claimed that $122,858 a month is not enough to support her lifestyle.

Tracey Hejailan-Amon, 47, was awarded the monthly support payment by a Monaco court, plus $1.26million in back payments, in her bitter divorce battle with Maurice Amon, 64.

Hejailan-Amon blasted the settlement as insufficient, claiming she needed four times that amount – nearly $500,000 a month – to maintain her lifestyle of year-round private plane and yacht travel, Page Six reported. Amon is worth a rumored $1.4billion.

The divorce battle began in 2015, when Amon, the heir to a Swiss company that makes ink for most of the world’s currencies, filed for a split after eight years of marriage.

It took a bizzare turn last year, when Amon accused his estranged wife of ruining millions of dollars worth of modern masterpieces. 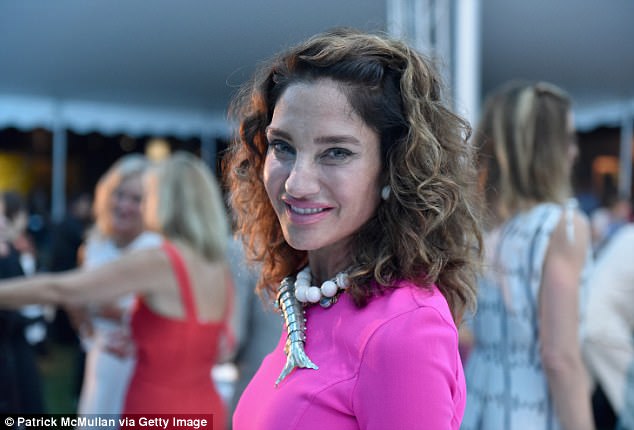 Hejailan-Amon has said she needs four times the $122,858-a-month settlement to maintain her lifestyle of year-round private plane and yacht travel 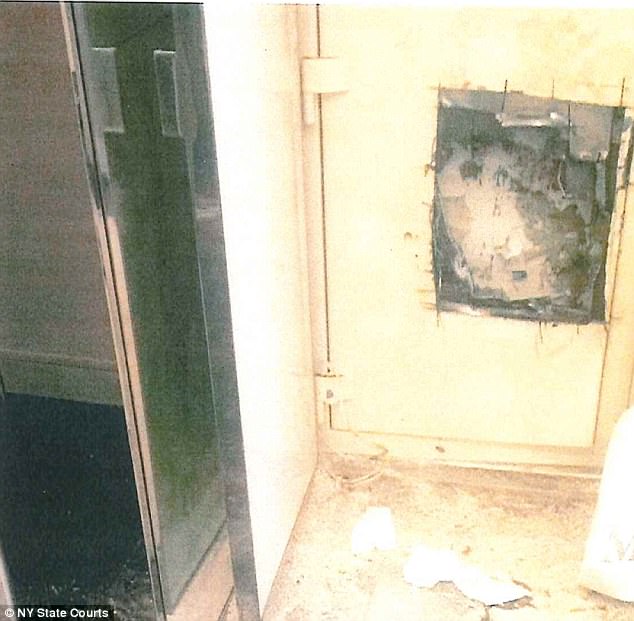 Amon claimed Hejailan-Amon took a blowtorch to the safe (pictured) in their $7million Paris apartment on February 4, damaging numerous paintings from their $25million collection 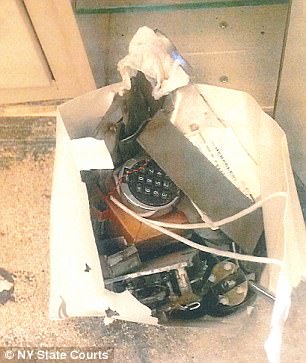 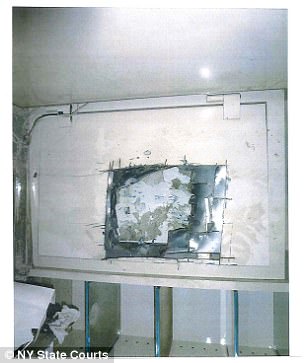 Maurice submitted these photos of safe wiring and electronics on left, busted wall on right 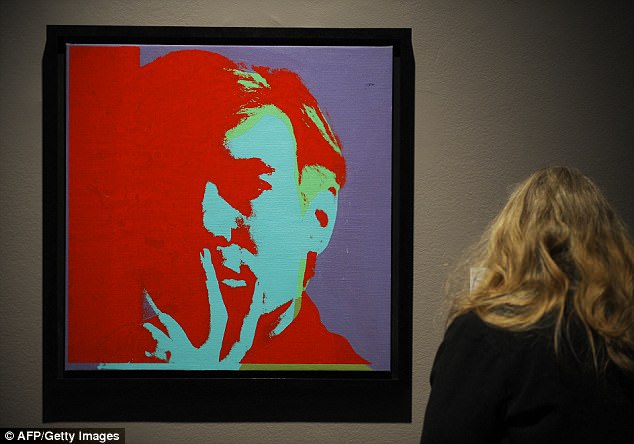 In court filings, Amon claimed Hejailan-Amon took a blowtorch to the safe in their $7million Paris apartment on February 4, damaging numerous paintings from their $25million collection in the process.

She did this after being told she would have to wait two days for a replacement key to the vault after misplacing her own, according to the filing.

She left her wedding ring inside the safe and nothing else.

Among the works that were partially or totally destroyed in the act were a Richard Prince, Andy Warhol’s 1966 self-portrait and Damien Hirst’s most widely-recognized piece, Acridine.

The Hirst painting, along with the other modern pieces in the couple’s collection, were said to be possibly beyond repair due to the toxic dust that accumulated on them as a result of the blowtoch.

The filing included multiple photos of the safe and area around it.

The photos show the massive damage that was done to the front and back of the safe, as well as the dust covering coating the ritzy pied-a-terre on the Rue du Cirque. 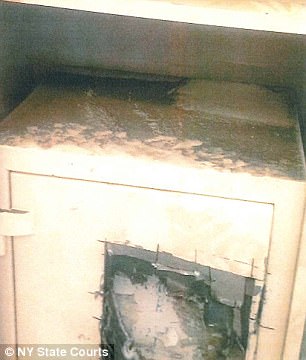 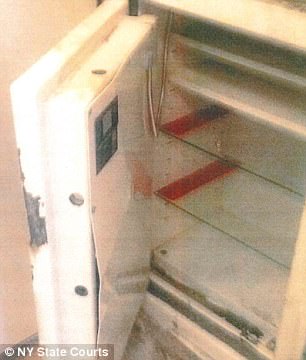 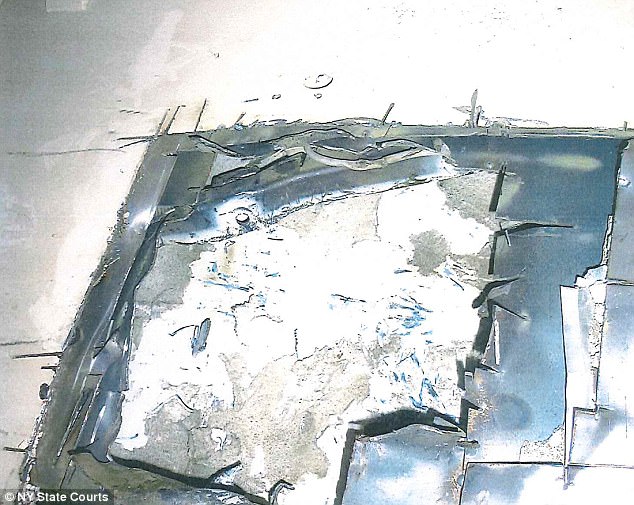 Alternate view: The safe was damaged on all sides (wall behind the vault above)and major work is necessary to many things inside the hose according to court papers 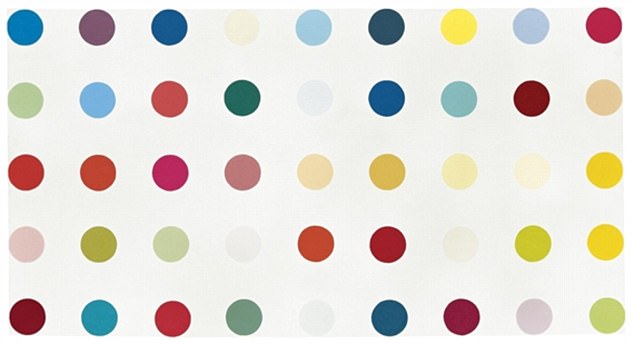 ‘The walls and floor of the apartment were all covered in a fine gray concrete dust that was clearly the result of a safe, located in a dressing room in the back of a apartment, being cut in with an angle grinder,’ wrote fine art dealer Christophe Lucien in a report included with the filing.

He went on to note that the ‘safe emitted an odor’ and ‘contained only a wedding band.’

‘I saw with my my naked eye that the majority of the contemporary art sculptures … were covered by the fine concrete dust generated by breaking into the safe,’ wrote Lucien. He said the ‘most severely affected’ were the ‘art sculptures made of porous, painted material and/or covered with nooks and crannies and/or made of fragile materials and/or attached to a fragile stand were the most severely affected. 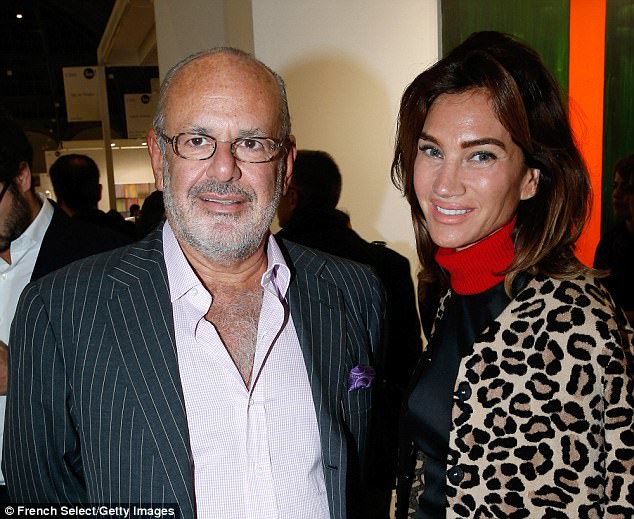 Amon, the heir to a Swiss company that makes ink for most of the world’s currencies, filed for a split in 2015 after eight years of marriage

The Hirst painting is Acridine, which Dave Stewart of the Eurythmics sold at a Sotheby’s auction in 2011, fetching just under $1million.

The Basquiat meanwhile is Saxaphone, which almost sold for $6million back in a 2015 auction at Christie’s, but that sale was halted when Tracey filed an injunction.

The Warhol in the collection is a 1966 self-portrait.

Hejailan-Amon did not reveal what it was that she needed to retrieve so desperately from the safe on that day.

The estranged wife, who during the marriage was lavished with gifts including a Ferrari, $10million in jewelry and over $75million worth of property during her time with Maurice, said she was completely caught off guard when she got the divorce papers. 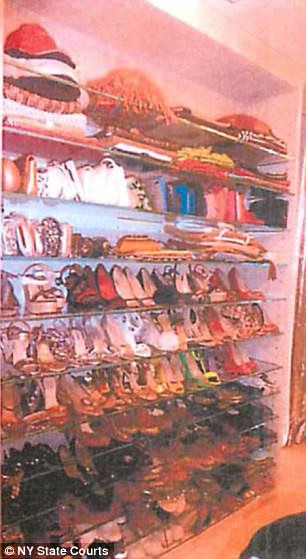 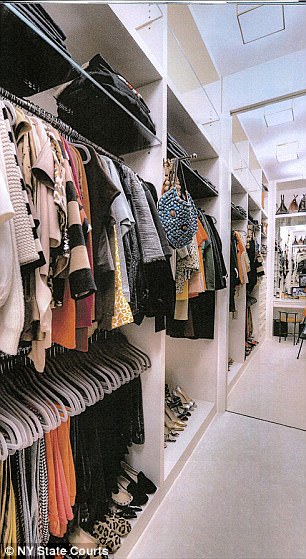 The couple have battled over the appropriate venue for the divorce proceedings.

Amon owns an apartment in the famed Monaco high rise Le Mirabeau, and wanted the proceedings held there, where courts often favor the wealthier spouse.

The couple also had homes on New York’s Fifth Avenue, a Swiss Chalet, a $7million pad in Paris and some London investment properties.

Hejailan-Amon wanted to settle the divorce in New York, where the court would award her a more generous payout. Without a pre-nuptial agreement, she expected to get as much as $70million in a US court.

Amon countered with a bizarre move, entering into evidence photos of his wife’s shoes and wardrobe in their Monaco apartment.

He claimed that the vast shoe collection showed that the Monaco apartment was her primary residence, and thus the principality was the proper court venue.