Stem cells taken from fat tissue are being used to create a new solution that has been shown to trigger hair regrowth in people with male-pattern baldness.

Researchers from the Pusan National University Yangsan Hospital, South Korea, say it affects about 50 per cent of all men and a similar percentage of women over 50.

The team recruited 38 patients – 29 men and nine women – with this common baldness and found a ‘significant increase in hair count’ after 16 weeks.

Study authors say that while it is not life-threatening, male-pattern baldness can lower self-esteem and psychological wellbeing in people with the condition.

There are a few FDA-approved medications in the US to treat hair loss, but the most effective can have side effects such as loss of libido and erectile dysfunction.

The discovery of this new solution was made when scientists found connective fat tissue let off growth hormones that help cells develop.

Study authors examined these stem cells in more detail and found they could trigger a number of growth factors increase the size of the hair follicles.

‘Recent studies have shown that [the solution can] promote hair growth in both men and women with alopecia,’ said researcher Professor Sang Yeoup.

‘However, no randomised, placebo-controlled trial in humans has explored the effects and safety of adipose-derived stem cell constituent extract (ADSC-CE)’ in male pattern baldness.

They created a study of midd-aged people with pattern-baldness to discover whether ADSC-CE solutions could work to cure them.

Of the 38 patients they studied, half were given ADSC-CE solution and the other a placebo solution that had no growth hormones.

Each patient applied the solution or placebo to their head with their fingers.

Senior author, Young Jin Tak, said: ‘At the end of 16 weeks, the group that received the ADSC-CEs had a significant increase in both hair count and follicle diameter.’ 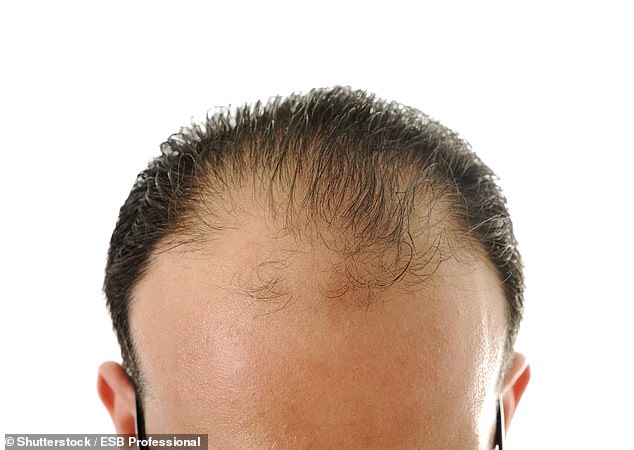 Study authors say that while it is not life-threatening, male-pattern baldness can lower self-esteem and psychological wellbeing in people with the condition

The authors say the findings suggest ADSC-CE solution can have ‘enormous potential’ as an alternative to other hair growth strategies as it can increase both hair density and thickness.

‘The next step should be to conduct similar studies with large and diverse populations in order to confirm the beneficial effects of ADSC-CE on hair growth and elucidate the mechanisms responsible for the action of ADSC-CE in humans.’

‘The topical solution created from proteins secreted by stem cells found in fat tissue proves to be both safe and effective. We look forward to further findings that support this work.’

The research has been published in the journal Stem Cells Translational Medicine.