The son of the most wanted paedophile in Wales has been spared jail after lying to police officers while the fugitive hid in his home.

Brian Ward was caught hiding behind a false wall after spending five years on the run.

The 62-year-old had a £2,000 reward on his head after being described as one of the UK’s most wanted men.

He turned up at a relative’s home unannounced and told his son he was going to hand himself in and wanted to say goodbye.

His son, 20-year-old Joseph Ward, answered the door and lied to police, saying he was not in the flat.

Prosecutor Lowri Wynn-Morgan said: ‘The defendant went to the door and told police that his father wasn’t there.’

Suspicious police could hear furniture being moved inside and threatened to force down the door.

They captured the moment they apprehended the pervert in a shocking video taken on officers’ bodycams.

Today Miss Wynn-Morgan told Cardiff Crown Court: ‘The police officer activated his body warn camera. He told the defendant he was filming and asked him again if his father was there and he said “no, I’m here on my own”.’

The court heard bodycam footage showed the officer searching behind a bedroom mirror which was ‘hinged like a doorway’ to spot Ward cowering inside the wall.

Joseph Ward, of Cardiff, pleaded guilty to assisting an offender by delaying police entering the property.

But he denied knowing his father was in the hole in the wall – which the court accepted.

Brian Ward was charged in 2013 with gross indecency with a child under 16, and four counts of indecent assault on a female.

Cardiff Crown Court heard he was found guilty in his absence after he fled midway through his trial. He was finally sentenced to five years and 20 weeks in December last year.

Joseph Ward has now been handed an eight month suspended sentence at Cardiff Crown Court. The court heard he has recently got a valeting job.

Judge Neil Bidder QC said Joseph Ward was ‘put in a predicament by the actions of his father.’ 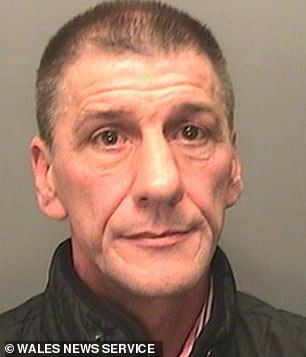 He said: ‘Your father went on the run. You did not see him for a period of years. The offences had a devastating impact on all the family members. It has caused you real mental damage.

‘You then were staying at your uncle’s house. Your father came completely unexpectedly and without warning to that house.

‘He told you that he was going to hand himself into police the next day. You believed that.

‘The police became aware of where he was and came to that address. You deliberately delayed police entry into the house. You were asked if your father was there and you lied to the police.’

He added: ‘Your father’s behaviour was and is deplorable.’