Married At First Sight UK’s Sophie Brown has been pictured for the first time since being accused of ‘allowing’ body-shaming comments towards Amy Christopher.

The reality star, 26, looked chic in a plunging black minidress featuring a dazzling silver belt, as she headed to Firefly restaurant in Manchester on Friday night.

Wrapping up in a fluffy brown jacket amid the sub-zero temperatures, she was all smiles while strutting her way through the city in a pair of black heels.

Emerging: Married At First Sight UK’s Sophie Brown has been pictured for the first time since being accused of ‘allowing’ body-shaming comments towards Amy Christopher

Just days ago, Sophie and her co-star Adrian Sanderson were accused of ‘allowing’ body shaming comments, after they were left under their joint Instagram Live.

Despite not being part of the video, the comments were targeted at Amy, who appeared in the 2021 series.

Now, the pair have been criticised for not turning the comments off ‘straight away’, with claims they ‘should have known better’.

Marilyse Corrigan, who starred in the same season as Amy, jumped to her castmates’ defence straight away. 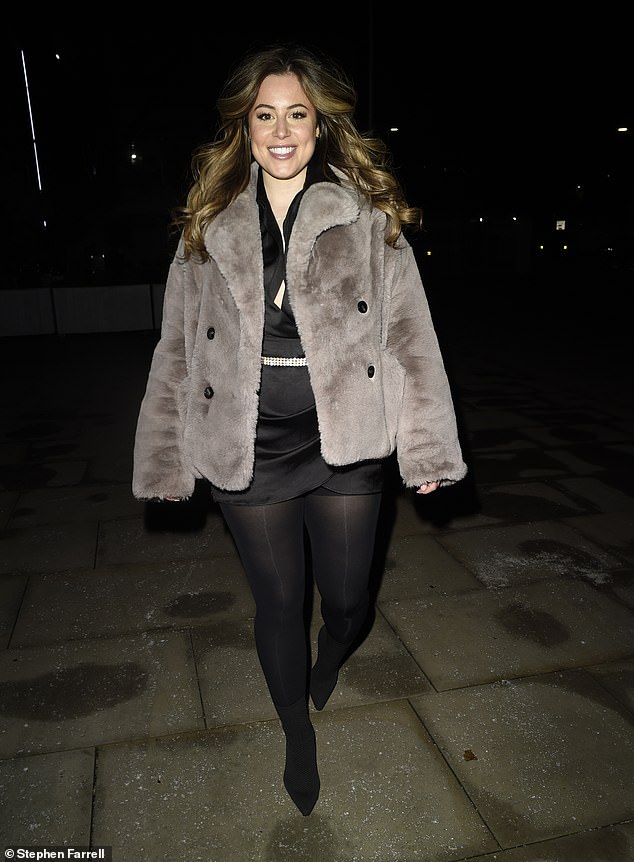 Hot stuff: The reality star, 26, looked chic in a plunging black minidress while wrapping up in a fluffy brown jacket, as she headed to Firefly restaurant in Manchester on Friday night

‘I would have thought the ‘MAFS family’ would know better by now. Shame on all involved.

‘Amy is beautiful inside and out. She’s a curvy, petite young woman who inspires lots of girls and isn’t and shouldn’t be ashamed of her body.’

Amy then reposted Marilyse’s story, thanking her and saying: ‘Really sad to get sent screen recordings of the comments and lots of unsolicited opinions and comments on my shape, body and weight. I’ll be addressing this properly at a later stage.’ 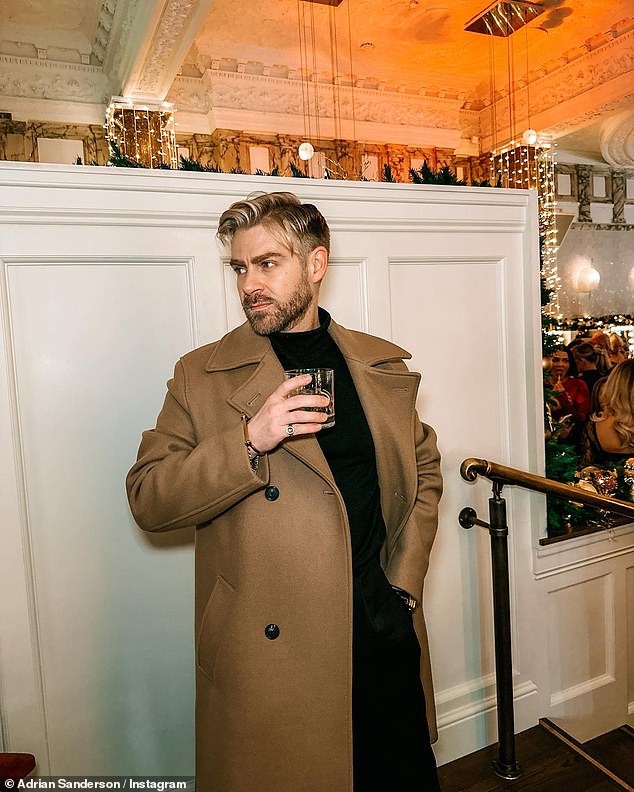 Oh dear: Just days ago, Sophie and her co-star Adrian Sanderson (pictured) were accused of ‘allowing’ body shaming comments, after they were left under their joint Instagram Live

She then added in another story: ‘Sophie is a beautiful girl. I have no ill feelings against her, as I hope she doesn’t for me.

‘It’s a shame as another curvy girl who also received negative comments about size she didn’t stand in solidarity and shut the comments down straight away.’

Sophie and Adrian both responded publicly, saying they were not aware of the comments taking place and condemned the fact they were made.

Sophie said: ‘I am not one to comment on situations that much, but when it’s about body image I absolutely will be there. I was made aware of some comments made on lives, and no one should have to go through that. 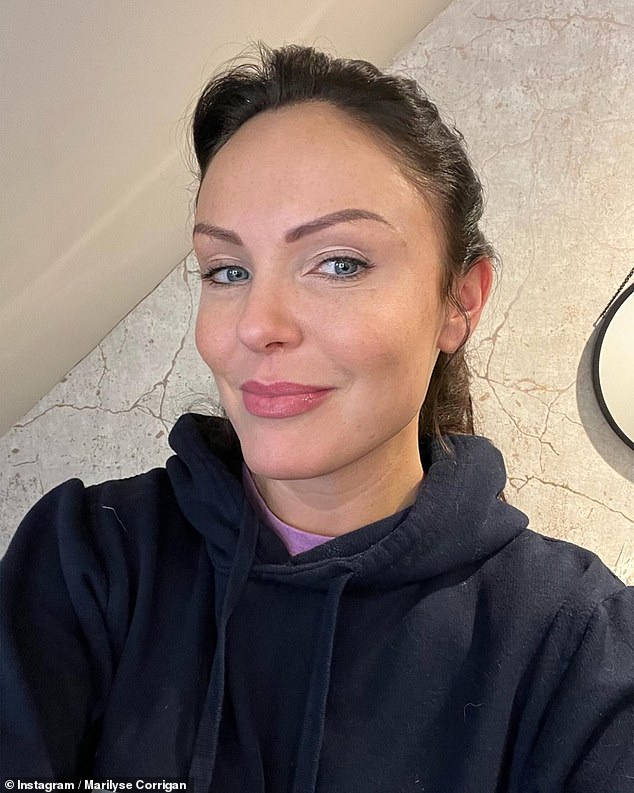 Good friend: Marilyse Corrigan (pictured), who starred in the same season as Amy, jumped to her castmates’ defence straight away

‘I know exactly how it feels which makes it worse. I was called chubby and fat throughout the show. Whatever someone’s intentions were, there was a conversation around my body type on the show. I’ve had that backlash and I know how it feels.

‘It’s a very painful thing to have to deal with, and it’s a very sensitive topic. I don’t condone any behaviour that’s aimed towards anyone, anyone that comments on someone’s body online is horrific.

‘Who is anyone to comment on anyone’s size? It’s so difficult, because there was a situation where someone said what their preferences were and now that’s being used where people are compared and people’s body sizes are talked about. I never wanted to be a part of that. 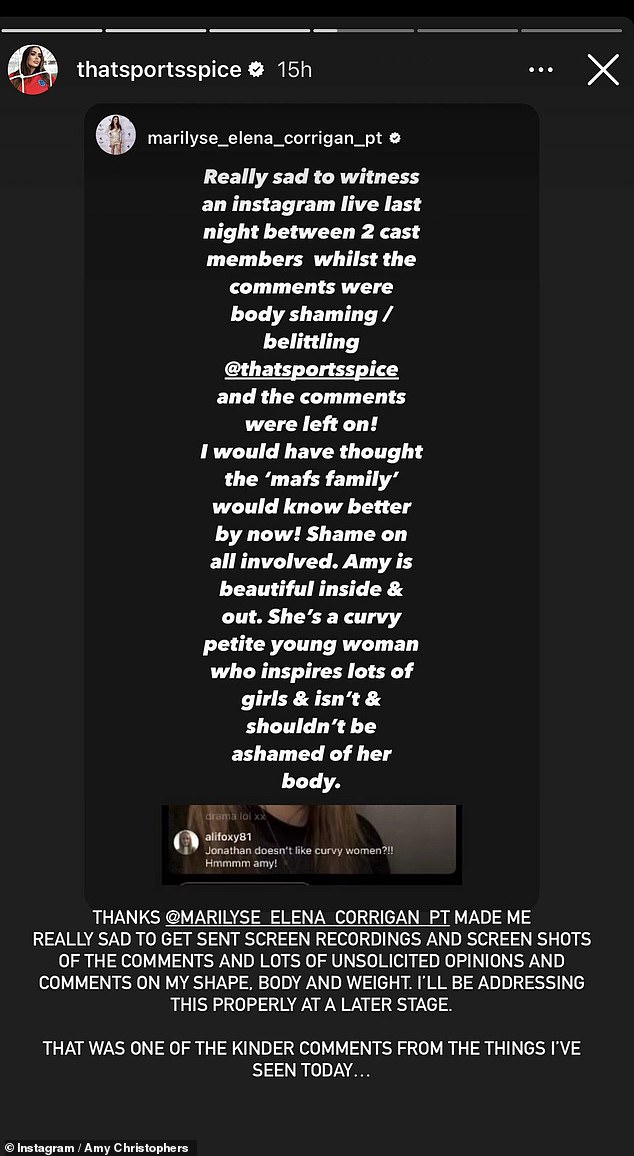 On the same page: Amy then re-posted Marilyse’s story, thanking her for her support and calling out the situation

‘I would never want anything like that near or on my page, I like to have a positive platform. Body image is something very sensitive to a lot of people and should not be talked about.’

Adrian also responded on his Stories, saying: ‘I’m not exactly sure what was said, it was in the comments on the live.

‘I’ve asked for screen recordings so I’m able to see who said it and I can block them from Instagram. I wish Marilyse had told me at the time so I would have been able to shut it down.

‘I will never condone this hate online, and I hope we can continue to be kind in the future.’

Other Married at First Sight UK contestants also weighed in on the situation – but one in particular was from Jonathan Wileman, who Sophie married on the show. 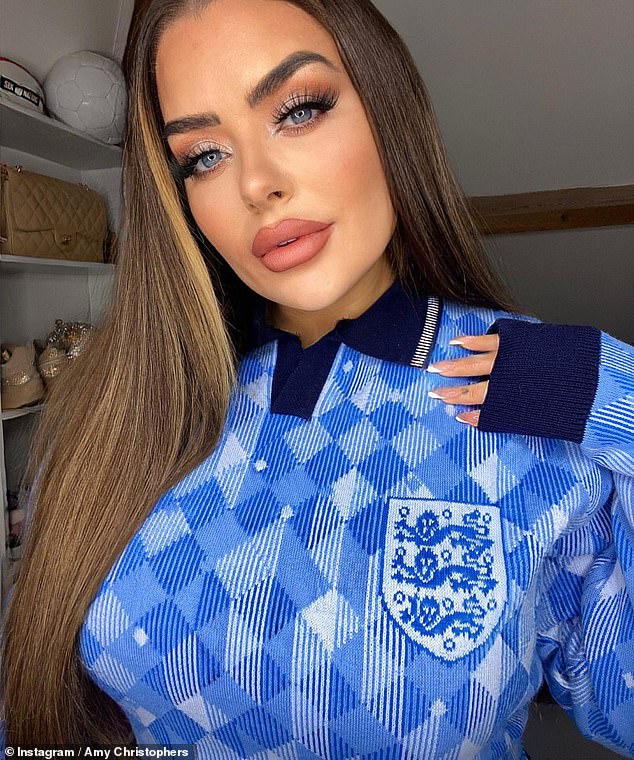 Shamed: Despite not being part of the video, the comments were targeted at Amy Christophers (pictured), from the 2021 season