Sophie Kasaei lashes out at claims she faked weight loss

She was targeted by cruel trolls last week, who claimed she had a ‘liposuction scar’ on her bottom and had therefore faked her recent weight loss.

However Sophie Kasaei fiercely lashed out at her haters on Wednesday, by defiantly sharing a throwback bikini snap – which proved she has had the scar for years.

Accompanying the image with a scathing rant on Twitter, the 28-year-old blasted her haters for not doing their research, before fiercely telling them to ‘kiss my scarred a**!’

‘Kiss my a**!’: Sophie Kasaei lashed out at trolls who claimed she had a ‘liposuction scar’ on Wednesday, by sharing a throwback bikini snap (L) to prove she has had the mark for years

Sophie paraded her newly-slim figure for all to see on Tuesday, as she stripped to a skimpy olive green bikini to soak up the sunshine in Turkey.

While she confidently displayed her toned stomach and waist, some followers were distracted by the ‘liposuction scar’ on her rear, which they claimed was proof she had faked her recent weight loss.

However the brunette, who got the scar when she had an abscess removed, immediately blasted the claims by sharing a recent bikini snap with one from last year – which still showcased the mark for all to see. 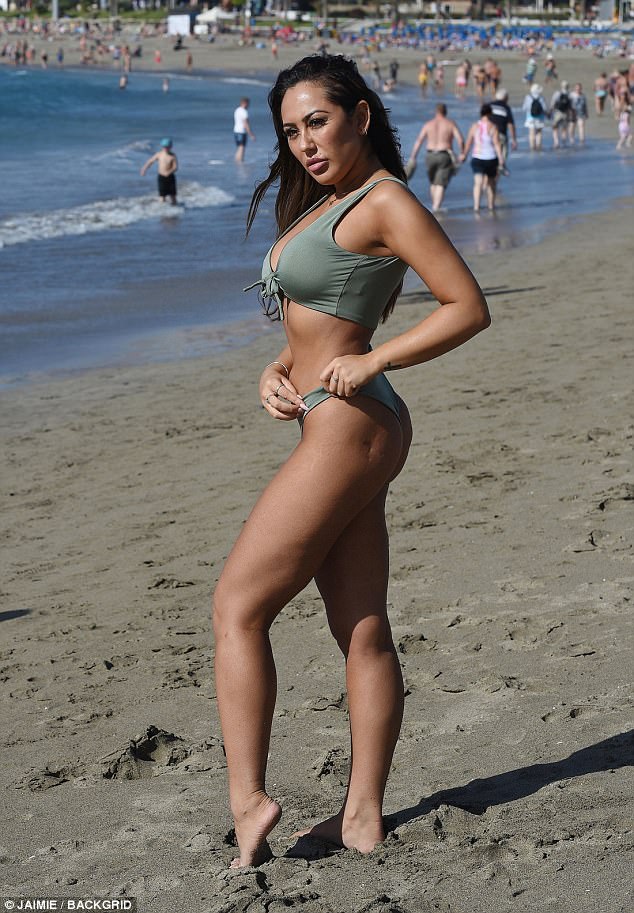 Not convinced: Sophie showed off her newly-slim frame in Turkey on Tuesday (above) – but claimed the mark on her rear was from liposuction, and accused her of faking her weight loss 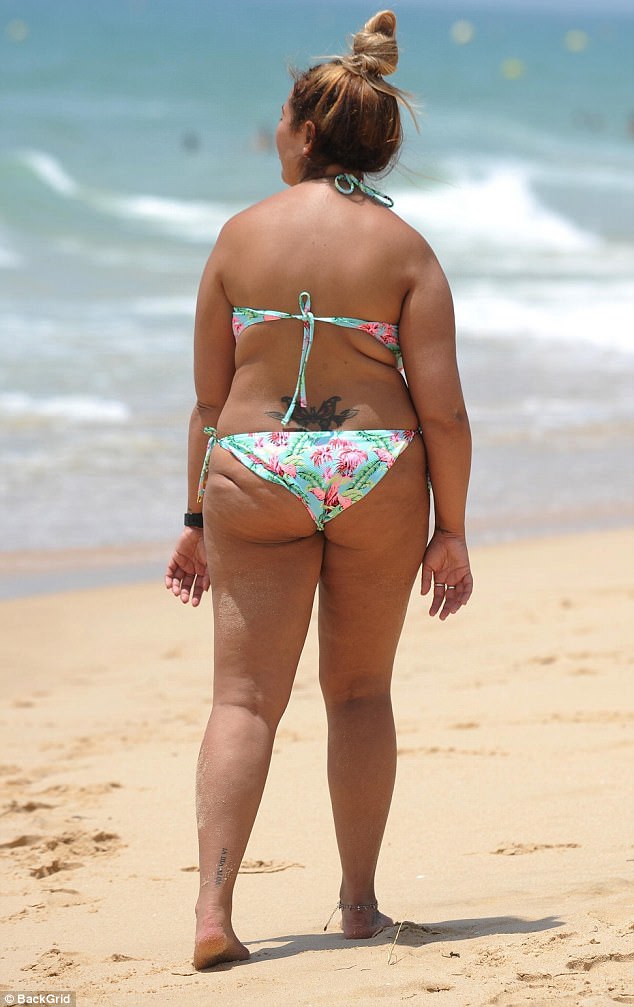 Take that: However Sophie shared a bikini snap from June to prove the scar was not new (above) – having had an abscess on her bottom removed last January

Furious at the accusations, she wrote in the caption: ‘For all the trolls out there who think it’s funny to say I’ve had liposuction & the scar on my bum is from it.

‘Here I am bigger and smaller and funnily enough the scar is the same in both! So before your HATE on me it may be worth doing some research!’

She signed off her scathing rant with a sassy peace sign, before adding fiercely: ‘Now kiss my scarred a**!’

Sophie had a golf ball-sized abscess removed from her bottom in January 2017, after discovering the lump during a winter holiday in Mexico. 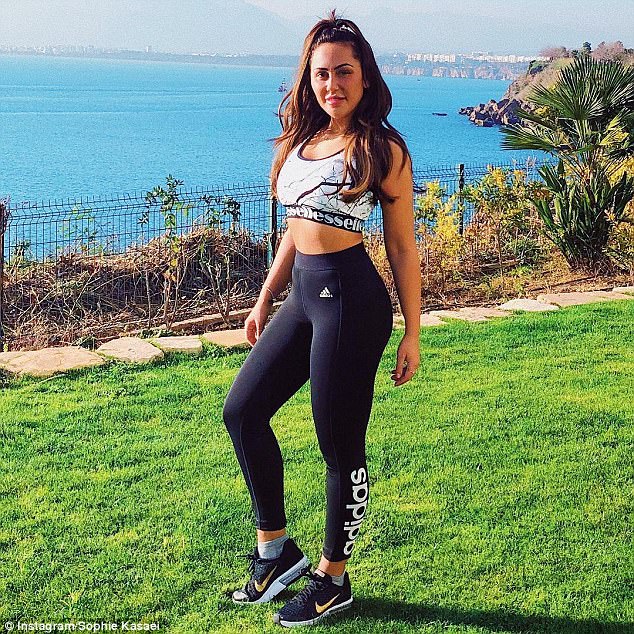 She told MTV at the time: ‘It looks like someone’s got a knife and stabbed us in the bum. It’s like a shark attack.’

Sophie unveiled her weight loss on Instagram last week, with a snap of her fuller figure six months ago to now – having lost an impressive two stone in weight.

She wrote to her followers: ‘Before photo I was unhealthy, living of a diet full of bad foods that put me at so many health risks.

‘I decided to make a change, adding training and healthy foods into my life has now given me the body I thought I would never get! 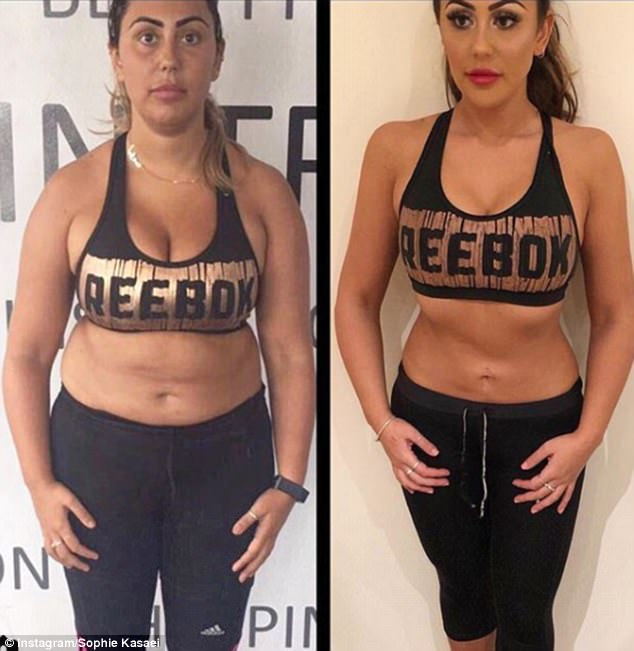 Making a change: Sharing a before and after shot, she wrote: ‘Being in denial was a very big part of me which now I know I can have the body I dream of!’

‘Being in denial was a very big part of me which now I know I can have the body I dream of! This took me a good few months but I did lose 2 stone over 6 months…’

Speaking exclusively to MailOnline last month, the reality star admitted she had been ‘in denial’ about her weight for years – but overhauled her lifestyle after seeing photos of herself in swimwear online.

She said: ‘There were pictures of me on the beach in June, and it was at that point where I I thought ‘is that actually me?’ I couldn’t believe it was me. I never thought I was that big. I was so in denial about my weight.

‘I always used to think that I was a skinny girl and in reality I wasn’t. I would try and squeeze into a size 8 dress, because I didn’t want to believe that I was a size 16.’ 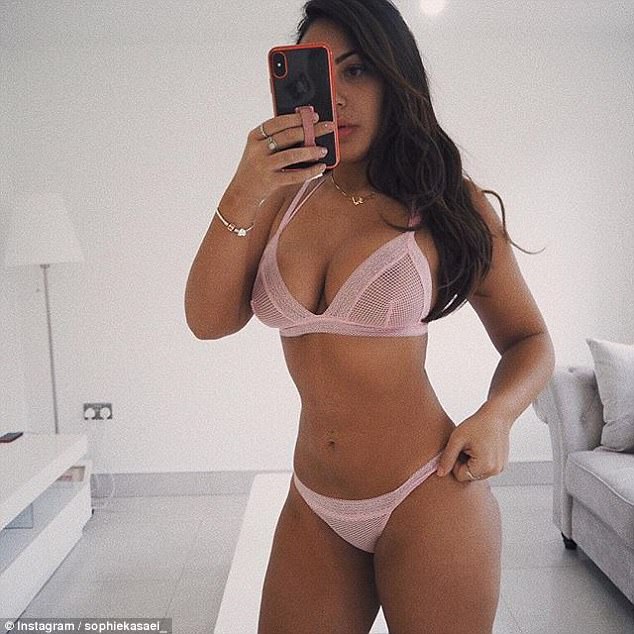 ‘I never thought I was that big’: Speaking exclusively to MailOnline last month, the reality star admitted she overhauled her lifestyle after seeing photos of herself in swimwear online