Game of Thrones star Sophie Turner stuck up for her future in-laws and called out a publication for claiming Nick Jonas’ recent marriage to Priyanka Chopra is ‘fraudulent’.

The 22-year-old’s fiance, Nick’s brother and bandmate Joe, also joined the masses of people online who have slammed the article – with many pointing out its sexist and racist tropes.

The article appeared yesterday in The Cut – an online branch of the biweekly New York Magazine.

Charges leveled at Chopra, a Bollywood actor currently starring in US TV series Quantico, include being a ‘modern-day scam artist’, tricking Jonas into a ‘fraudulent relationship against his will’ and ‘thriving on being extra’ i.e. excessively dramatic.

Priyanka Chopra and Nick Jonas arrive at the Bumblebizz app launch today, as an internet furore erupts around an article on New York Magazine’s offshoot website The Cut, which calls their marriage ‘fraudulent’ 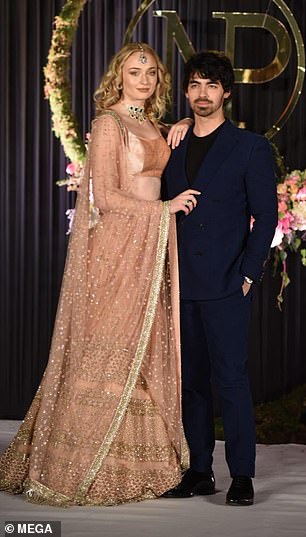 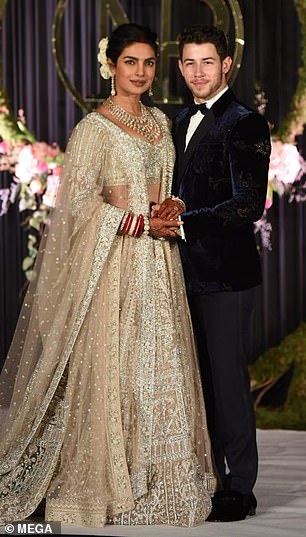 Sophie Turner (left) wore a traditional dress as she posed for photos alongside Joe Jonas at the ceremony. Both  weighed in to defend Nick Jonas and Priyanka Chopra (right) after an article appeared criticizing their relationship 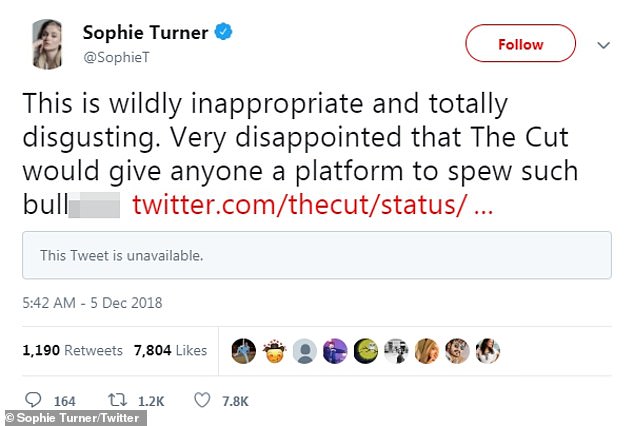 Turner called the piece, which appeared under the headline, ‘Is Priyanka Chopra and Nick Jonas’s Love for Real?’, ‘wildly inappropriate and totally disgusting.’

Meanwhile Joe Jonas posted on his own Twitter account: ‘This is disgusting. @TheCut should be ashamed to have someone write such evil words. What Nick & Pri have is Beautiful Love. Thank u, Next.’

Jonas, 26, the youngest member of the band the Jonas Brothers, and 36-year-old Chopra married over the weekend in both Hindu and Christian ceremonies in Jodhpur, with Turner and her fiance Joe Jonas in attendance.

The Cut promoted their article with a tweet saying: ‘That’s right: Nicholas Jonas married into a fraudulent relationship against his will this past Sunday, December 1, and I’ll tell you why I think so.’ 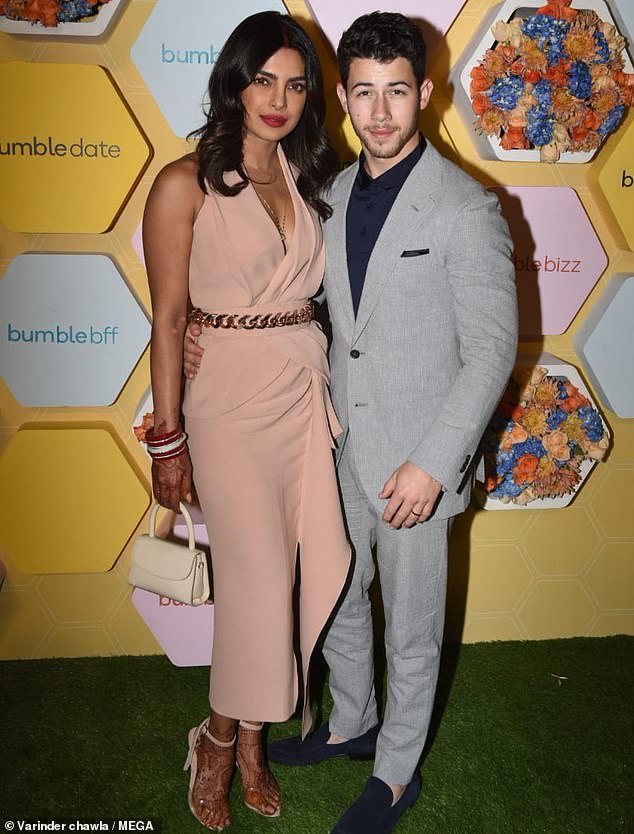 Jonas, 26, the youngest member of the band the Jonas Brothers, and Chopra married over the weekend in both Hindu and Christian ceremonies in Jodhpur

The author then goes on to portray Chopra as a money-orientated diva who calculatingly tricked the unwitting Jonas into marrying her after ‘dating became her job’.

Her actual job is harder to pin down – as well as her hugely successful Bollywood career, she has released three singles and founded a production company Purple Pebble Pictures.

Chopra has also worked with UNICEF for 12 years and was appointed national and global UNICEF Goodwill Ambassador for Child Rights in 2010 and 2016, respectively. 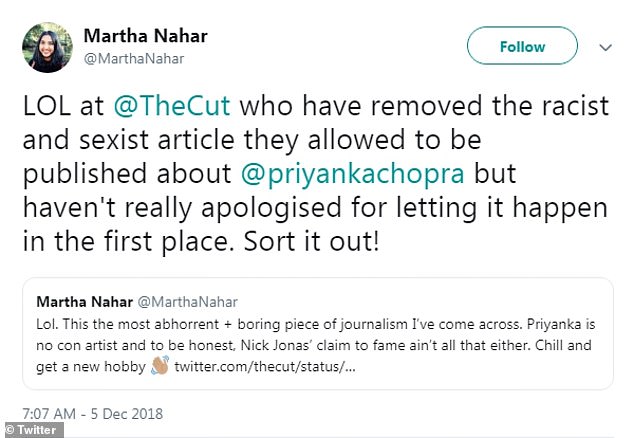 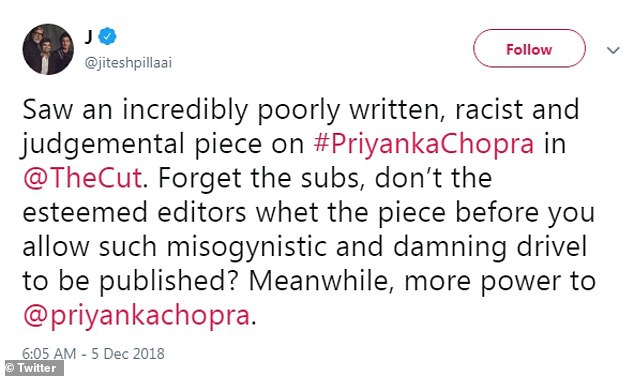 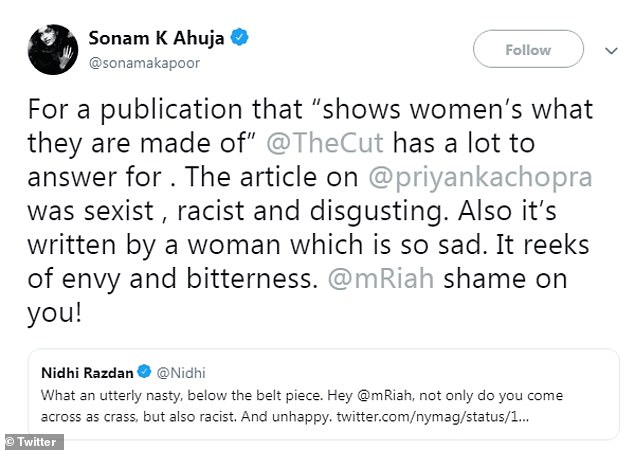 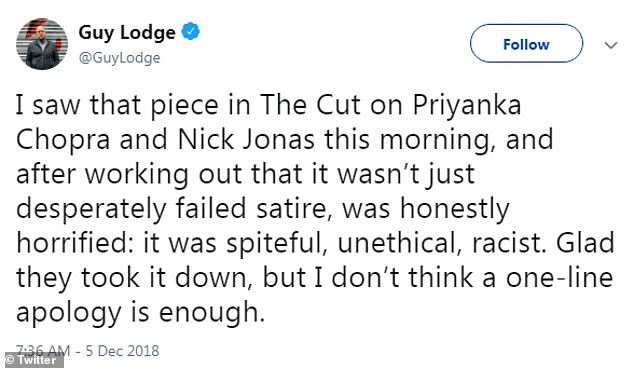 Social media users across the globe were quick to slam the evident racism and sexism in the article, which has now been taken down by The Cut

She is a vocal advocate on feminism, the environment, health and education.

Social media users across the globe were quick to point out the sexism in the article, which has now been taken down by The Cut.

Citing an interview from last year in which Chopra said: ‘I like the high life and work very hard for it’, the author said that this speaks ‘volumes to her personality and what she’ll do, or think she needs to do, for her career’.

Chopra is accused of adding Jonas ‘to the short list of Hollywood men that she and her team would test out for a possible romance’ in order to break America and further her career – despite the fact that has been a major star in India since 2003 and has countless accolades to her name. 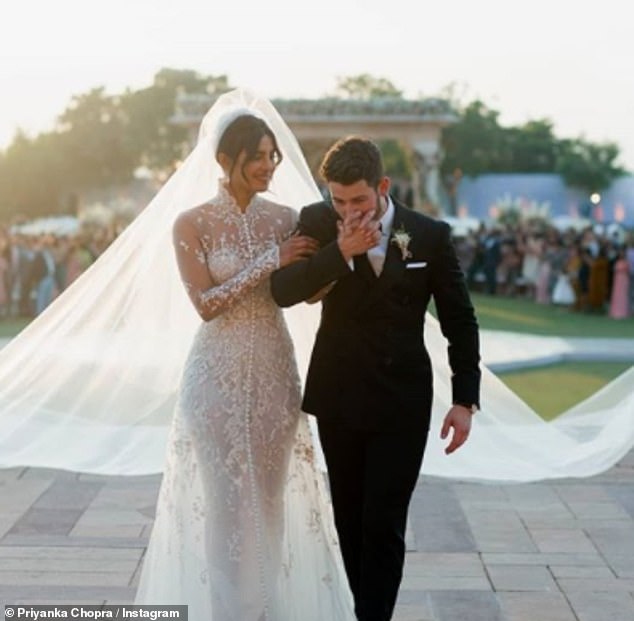 The author also absolves Jonas of all brain-power, saying he is too ‘blinded by love’ to notice that Chopra has allegedly been ‘monetizing this life milestone’ behind his back.

While they have – as a couple – have accepted endorsement deals from brands such as Tiffany’s and Ralph Lauren, the author says ‘Nick doesn’t suffer from the same affliction as his wife’ – namely an obsession with making money and being the center of attention.

The piece portrays Jonas as an innocent victim, surmising that ‘All Nick wanted was a possible fling with Hollywood’s latest It Woman, but instead he wound up staring straight at a life sentence with a global scam artist… who never even took the time to make sure he was comfortable riding a horse before arranging for him to enter their wedding ceremony on horseback.’ 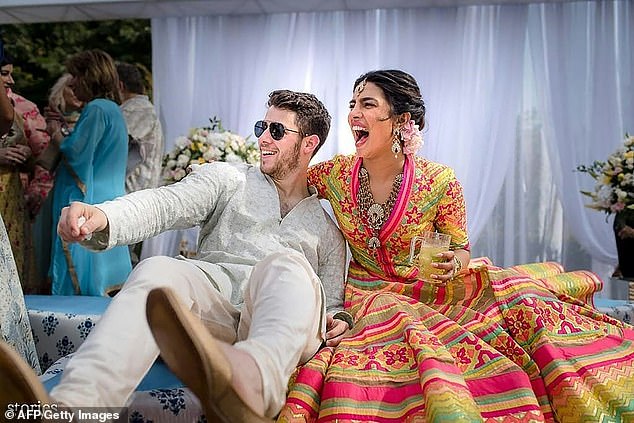 Three day extravaganza: The Bollywood star and American singer married in a Christian ceremony Saturday night presided over by the groom’s pastor father before Hindu celebrations on Sunday (pictured at their pre-wedding Mehendi ceremony) 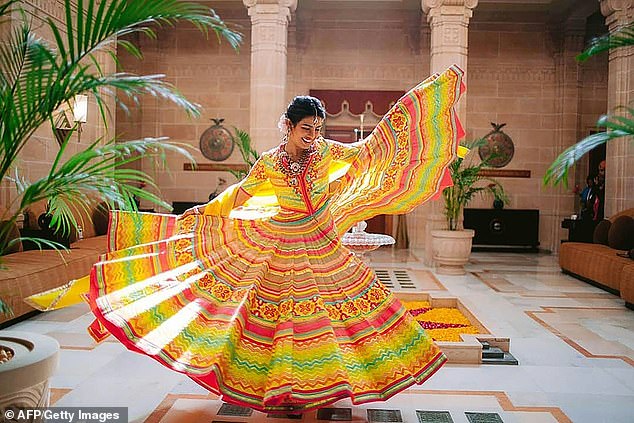 Glamour: According to the Bollywood gossip site PinkVilla , Priyanka attended her Mehendi in a gown by the duo Abu Jani and Sandeep Khosla.  Nick’s mother Denise Jonas presented her with a $79,500 pair of Van Cleef And Arpels Snowflake earrings 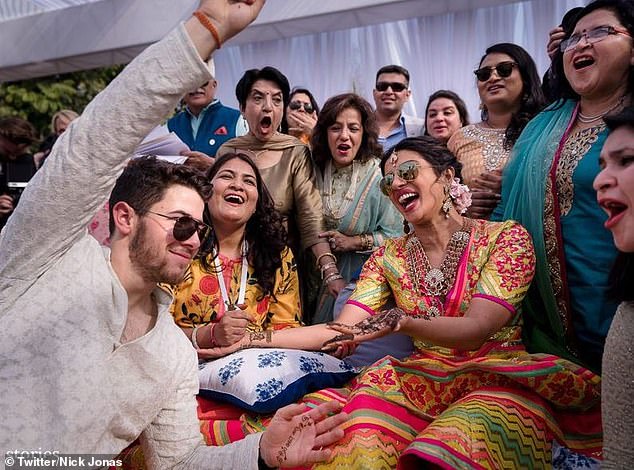 Festive: Typically held the day before the wedding, the Mehendi is when the bride, as well as female guests at the wedding, have henna tattoos applied to their hands (pictured during the Saturday ceremony)

Indeed, the article is littered with racist and sexist connotations – Chopra’s so-called crime of wanting to live the ‘high life’ and earning money is something that every white celebrity in America is guilty of. Yet exceptional anger is directed towards a her, a foreign woman, and she is labelled an imposter who is trying to scam her way into America.

Chopra and Jonas first connected when he contacted her on Twitter in 2016 and they became engaged in July this year.

Nick Jonas is one of the three Jonas brothers who found success as a pop grounp before disbanding in 2013, after which Nick Jonas has continued his career as a solo artist.

The Cut removed the article following the criticism saying it ‘did not meet our standards’.