Sorry, but I can’t put a brave face on my mastectomy

Nature loves symmetry. The opposite of even is odd. We pity people who have only one of what we normally have two of, whether that’s legs, arms, eyes or ears. Or boobs.

It was not my choice to end up with one breast, but cancer decreed otherwise.

First a small piece, removed 16 years ago, and then last year, at the age of 71, the whole lot.

Now, sadness sweeps over me when I catch sight of my undressed self in the mirror. It is hard to reconcile myself to the ugly scar that slashes across my chest where my right breast once was. I quickly turn away and pull on some clothes.

The mastectomy caught my returning cancer at an early stage. It was a life-saver really, but that doesn’t mean I have to like it or even be brave about it.

Jane says the mastectomy caught her returning cancer at an early stage It was a life-saver, but that doesn’t mean she has to like it or even be brave about it

I am fed up with reading endlessly upbeat pieces from women saying they sailed through their mastectomy and they love their new bodies.

I have found it hard to buy in to today’s positive thinking ‘love yourself’ mantra. How can you be actively happy to have lost a treasured part of yourself? Can’t we just accept our mastectomies, without having to like them? Is it really necessary to display our scars on social media and exhort others to admire our new bodies?

I expect there are internet forums for women in my position, but I have never been on them. Past experience makes me think I will not come out feeling uplifted (ha-ha). I am not a very clubbable person anyway.

I think friends might say I have been stoic, but the truth is I have done my crying on my own. I am not good at crying in public or being comforted; it’s all just too EastEnders for my taste.

Instead, I choose to make jokes about it. It’s my boob (or, rather, it was), so I shall do as I like. Wisecracks are my therapy anyway, so don’t look so shocked.

‘No reconstruction for me,’ I told a friend. ‘Oh, but you must. You will be lopsided,’ she replied.

‘I have a better idea,’ I said. ‘I’ve asked the surgeon to move the remaining breast to the middle.’

She looked concerned and answers, carefully. ‘Oh, I don’t think that will work!’

See what I’m up against?

The NHS invites women to be checked for signs of breast cancer every three years from the age of 50 up to 70.

Once over 70, you won’t normally be invited for screening, but this doesn’t mean you are no longer at risk — more than 80 per cent of breast cancers are in women over the age of 50.

You can still request a mammogram by contacting your local screening unit. Your GP’s surgery will be able to provide you with a phone number.

My attempt to lighten the mood during one of the endless mammograms was equally unsuccessful.

‘Do I get this for half price now I have only one breast?’ I asked.

A cost list was duly consulted — really — and I was informed that ‘it doesn’t work like that’.

No, I don’t suppose it does.

When the cancer was first discovered at a routine screening 16 years ago, I was 55 and working as a magazine editor.

I had health insurance so could afford private treatment. A small piece of breast tissue was removed, I was put on the breast cancer drug tamoxifen and given radiotherapy treatment. Job done.

The private health cover ended a decade ago, but I continued paying to see my chosen specialist and have regular check-ups.

After 15 years, I’d come to take these trips to Harley Street in my stride, my main concern being where I would go for a nice cup of coffee. I was confident that I would never hear the words ‘breast cancer’ again.

But I was wrong. A routine mammogram in January last year revealed the cancer had returned, and this time I would need a mastectomy.

I was told breast reconstruction would not work for me, either, as the earlier radiotherapy had left me with skin that would not heal well. Bugger.

The operation was booked in. I didn’t feel so much scared as sulky and bitter, swinging between ‘why me?’ and the more fatalistic ‘why not me?’

My partner, on the other hand, who has a naturally upbeat personality, was supportive and happy that a killer had been discovered and was going to be vanquished.

The operation itself was painful. (Thanks to fears of opioid addiction, the strongest I was given afterwards was a paracetamol.) 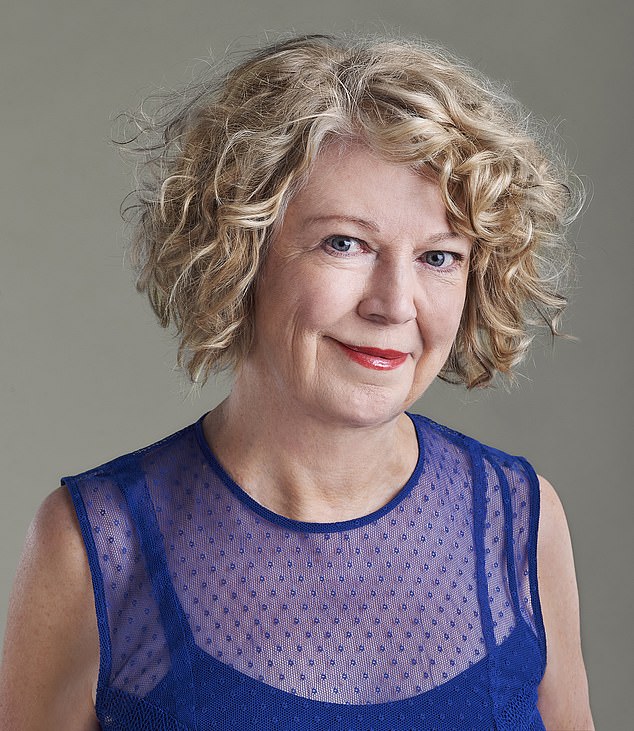 When the cancer was first discovered at a routine screening 16 years ago, Jane was 55 and working as a magazine editor

It was de-energising. I could hardly stay awake for a month. I just slept all the time, even when friends came to see me.

It was miserable. I looked like Jacob Marley from A Christmas Carol, clanking around attached to bottles with tubes which were draining fluid from the wound. I carried them with me for a couple of weeks in a canvas shopper bearing the logo ‘create your own sunshine’. Oh, the irony!

And it left me resentful. Like many cancer patients, I had gone for a routine test feeling healthy, and now I felt dreadful.

Slowly, my health and energy returned, and a year on I was able to feel grateful for the operation that saved my life. I was able to go on holiday, stay up late, enjoy sharing a bottle of wine, take on work. In other words, normal life returned. But there was something missing — literally.

Losing a breast is like going into mourning; like losing an old and dear friend. You can’t forget about it. The best you can do is to park it some place where you don’t think about it too often.

And being lopsided brings unforeseen problems, too.

‘Surely there must be a way of holding up one breast without having the uncomfortable other half of a bra pressing on the sore side,’ I remarked to my partner.

I saw a Heath Robinson gleam come into his eye. Thoughts of Howard Hughes, the multi-millionaire American inventor who designed bras for actress Jane Russell and then went mad, flitted through my mind. Stop right there, I told him.

As it turns out, the only way of evening things up is a prosthesis. (Vile word. It reminds me of a shop I used to walk past as a child, with a window full of medical devices: false legs, corsets and trusses all in a fetching dead-chicken pink).

These days you can get your breast prosthesis (which fits into an internal pocket in your bra) in silicone, which is very heavy; foam and silk, which won’t stay put; or eerie mini-beanbags.

Admittedly, there are some wonderful lingerie ranges designed to make wearing them less of a misery. I’d advise seeking out a specialist company. I went to Nicola Jane (nicolajane.com), who helped me pick the right combination, after some trial and error.

The results were pretty spectacular. Nobody seeing me in my undies — or, indeed, the lovely swimsuit I bought — would ever know I had had a mastectomy.

At first, the prosthesis was a little uncomfortable. But soon, I didn’t know I was wearing it.

I didn’t forget about the missing breast, though.

Certain freedoms have been lost. The carefree ease in which I changed in communal locker rooms at the gym or spa or on the beach has gone. I have become a pathetic towel-clutcher. And a certain pride I felt in being in shape at 70 has left me completely.

If you’re facing mastectomy yourself, you should know that it is no walk in the park. You will feel ill and, unless you are a certifiably positive thinker, you will feel sad.

Friends take note: books, box sets of DVDs, cooked meals, big comfy pillows and things for the bath are all better gifts than flowers (watching them die is depressing), cards (especially the one that said ‘You are braver than you think’), cakes and chocs (no appetite).

The look and feel of the scar improves with time. At first it will be very lumpy, but after a year it just looks like a scar.

Do you ever get used to it? No.

Do your loved ones love you any less? No.

Do you love yourself any less? Aye, there’s the rub. I think perhaps I do. I know it is stupid, but I can’t help it. Who knew that so much self-esteem could be contained in a few grams of fat?

There will be people who have lost loved ones to breast cancer or who are in its terminal stages who will think I am very ungrateful.

Of course, I will be ever grateful to the consultant surgeon, Tim Davidson, to whom I owe my survival. And I know I am lucky to be here. But if it’s churlish not to go around marvelling that I am still alive every minute of the day, call me a churl.

‘Looks like you are going to outrun this cancer,’ (i.e. die of something else) a cheery relative said to me recently. But running a race you never wanted to enter, against an opponent with deathly intent, is no fun. And neither is living with the scars.