South Korea is considering moving US ‘tactical nuclear bombs’ back on to its territory after Kim Jong-un’s hydrogen bomb test, it has emerged.

North Korea staged its sixth nuclear test on Sunday, estimated to be up to ten times more powerful than the device dropped on Hiroshima.

Seoul has been ramping up its defenses in response, with some officials even considering asking the United States to bring back tactical nuclear weapons – a generation after their removal from the Korean Peninsula.

South Korea also said it was talking to Washington about deploying aircraft carriers and strategic bombers to the Korean peninsula.

It comes as one of Kim Jong-un’s top diplomats said on Tuesday it was ready to send ‘more gift packages’ to the United States – a reference to its nuclear test.

South Korea is considering moving US ‘tactical nuclear bombs’ back on to its territory after Kim Jong-un’s hydrogen bomb test, it has emerged. A South Korean test rocket launch is pictured 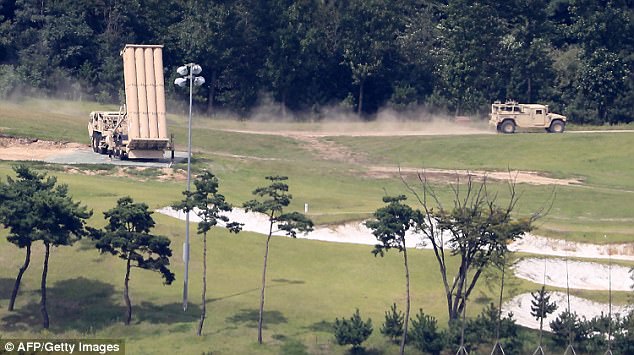 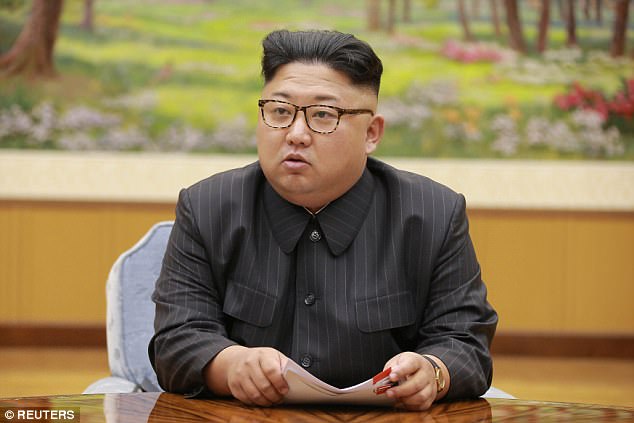 Kim Jong-un staged North Korea’s sixth nuclear test on Sunday, estimated to be up to ten times more powerful than the device dropped on Hiroshim

Han Tae Song, ambassador of the Democratic People’s Republic of Korea (DPRK) to the U.N. in Geneva, was addressing the U.N.-sponsored Conference on Disarmament two days after his country detonated its sixth nuclear test explosion.

‘I am proud of saying that just two days ago on the 3rd of September, DPRK succcessfully carried out a hydrogen bomb test for intercontinental ballistic rocket under its plan for building a strategic nuclear force,’ Han told the Geneva forum.

‘The recent self-defence measures by my country, DPRK, are a ‘gift package’ addressed to none other than the U.S.,’ Han said.

‘The U.S. will receive more ‘gift packages’ from my country as long as its relies on reckless provocations and futile attempts to put pressure on the DPRK,’ he added without elaborating.

Military measures being taken by North Korea were ‘an exercise of restraint and justified self-defence right’ to counter ‘the ever-growing and decade-long U.S. nuclear threat and hostile policy aimed at isolating my country’.

‘Pressure or sanctions will never work on my country,’ Han declared, adding: ‘The DPRK will never under any circumstances put its nuclear deterrence on the negotiating table.’ 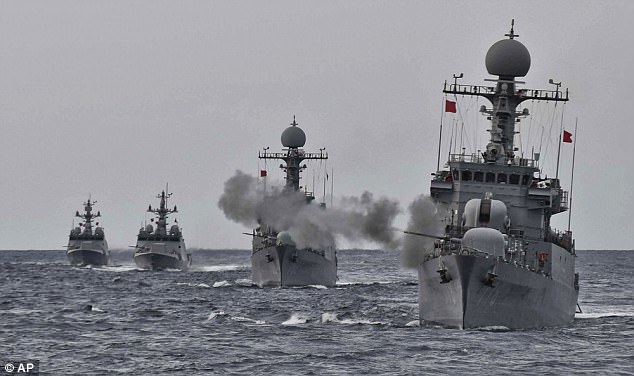 WHAT ARE TACTICAL NUCLEAR WEAPONS?

Tactical nuclear weapons are generally designed for the battlefield and to destroy nearby targets of immediate military value.

They became a large part of the nuke stockpile levels during the Cold War and include gravity bombs, short-range missiles, artillery shells, land mines, depth charges, and torpedoes equipped with nuclear warheads.

Tactical weapons differ from strategic nukes which are designed for larger targets that will hit an enemy’s territory away from the battlefield.

These bombs generally have significantly larger yields from 100 kilotons up and might be used to destroy military bases, big industry hubs, infrastructure or towns and cities.

His comments come as South Korea’s Defense Minister Song Young-moo said that he had asked his US counterpart, Jim Mattis, to bolster defences in the South, according to the Washington Post.

‘I told him that it would be good for strategic assets to be sent regularly to the Korean Peninsula and that some South Korean lawmakers and media are strongly pushing for tactical nuclear weapons [to be redeployed],’ Song is quoted as saying.

‘The redeployment of tactical nuclear weapons is an alternative worth a full review,’ Song added.

Experts say South Korea would have a hard time persuading the United States to re-introduce tactical nukes to the Korean Peninsula. These were withdrawn in the 1990s.

Even so, that hasn’t stopped lawmakers from South Korea’s largest conservative party from demanding the return of the weapons. 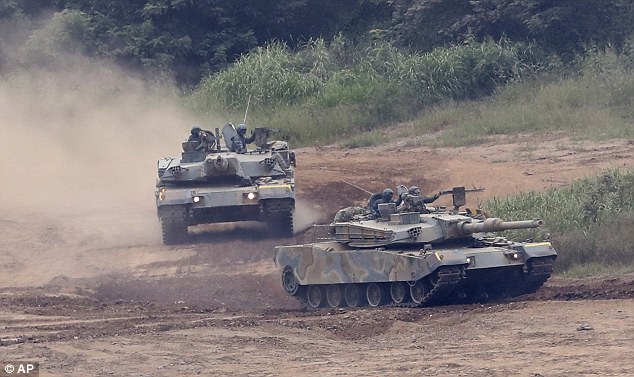 South Koreans who support the return of U.S. tactical nukes often raise fears of rifts in the decades-old security alliance between Washington and Seoul because of North Korea’s expanding nuclear weapons program.

If North Korea obtains a fully functional ICBM, the United States might hesitate using its nuclear weapons to defend South Korea because of worries that North Korea might then strike a U.S. city, they say.

Placing U.S. tactical nuclear weapons in South Korea would make clear the intent to use nukes in a crisis.

Critics say it is highly unlikely the United States would ever agree because it now relies on homeland and sea-based military assets to provide its allies extended nuclear deterrence.

Some South Korean military experts say the nukes wouldn’t meaningfully improve the South’s defense and would only provide North Korea more targets to destroy or even attempt to steal.

However, Seoul’s new interest in stronger weapons received a boost on Tuesday when the Trump administration agreed to remove previous restrictions on South Korean missiles.

Since the late 1970s, South Korean missile development has been limited by a bilateral ‘guideline’ between the United States and Seoul. It was updated in 2012 to allow the South to increase the range of its weapons from 300 kilometers (186 miles) to 800 kilometers (497 miles). 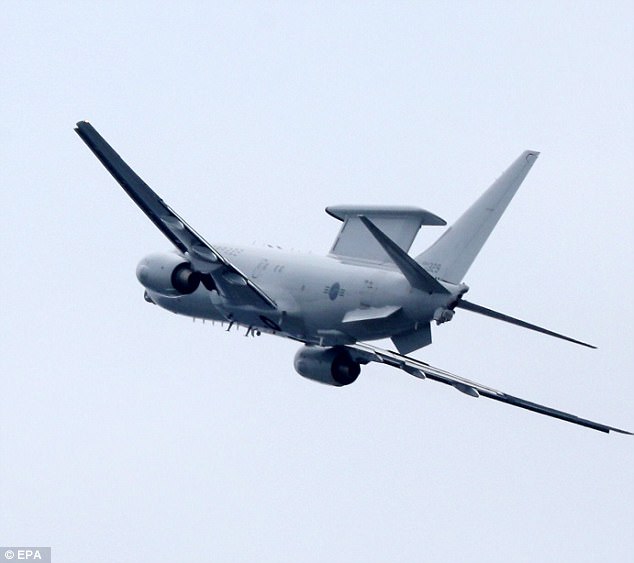 An agreement revealed today removes a 500-kilogram (1,100-pound) warhead limit on South Korea’s maximum-range missiles, which would allow the South to potentially target the North’s underground facilities and shelters.

In addition to expanding its missile arsenal and holding military exercises, South Korea is also strengthening its missile defense, which includes the high-tech Terminal High Altitude Area Defense battery deployed in the southeastern county of Seongju.

North Korea is thought to have a growing arsenal of nuclear bombs and has spent decades trying to perfect a multistage, long-range missile to eventually carry smaller versions of those bombs. Both diplomacy and severe sanctions have failed to check its march to nuclear mastery.

U.S. President Donald Trump, asked in Washington if he would attack North Korea, said, ‘We’ll see.’ No U.S. military action appeared imminent, and the immediate focus appeared to be on ratcheting up economic penalties, which have had little effect thus far.

In tweets earlier this week, Trump threatened to halt all trade with countries doing business with North Korea, a clear warning to China. Such a move would be radical since the U.S. imports about $40 billion in goods a month from China. China called that threat unacceptable and unfair.

Sunday’s nuclear detonation builds on recent North Korean advances that include test launches in July of two ICBMs, which, when perfected, could target the U.S. mainland. The North also threatened to launch a salvo of Hwasong-12 intermediate range missiles toward the U.S. Pacific island territory of Guam, the home of military facilities the North claims are meant to target it.

The U.S. has about 28,000 troops stationed in South Korea and is obliged by treaty to defend it in the event of war.