South Korea has street lights on the GROUND so you can keep staring at your phone while waiting for traffic to stop – so is it a genius idea or a shameful invention for a dangerous addiction?

South Korea has come up with a bizarre invention which allows its residents to keep staring at their phone while crossing the road as safely as possible but not everyone is sold on the idea.

TikTok footage emerged on October 11 of an intersection in Seoul that shows curbs lit up with green and red lights, indicating when it’s safe to cross the road even if you’re looking down at your phone screen.

The video posted by user naturalkorean shows groups of people in the nation’s capital coined ‘smombies’ – or ‘smartphone-obsessed zombies’ – crossing a busy road without even looking up from their hands.

The ‘in-ground LED traffic signal lights’ were installed in Seoul in 2019 as a trial but the city has clearly adopted them even since.

In March 2019 the South Korean government also implemented an alert system which sends a notification to phones if walkers are about to step into traffic.

In South Korea’s capital city, Seoul, LED ground lights are used for people glued to their smartphones, telling them when to cross roads (pictured)

‘South Korea has streetlights on the floor so you can keep staring on your phone,’ the latest TikTok video was captioned.

The strange invention has divided the internet, with some arguing it is a great idea while others claim the it’s just encouraging a phone addiction.

‘I can’t believe some people care about their devices more than their life,’ one user wrote on the app.

‘This is a way of the government normalising walking while on your phone? This is not okay at all,’ another wrote. 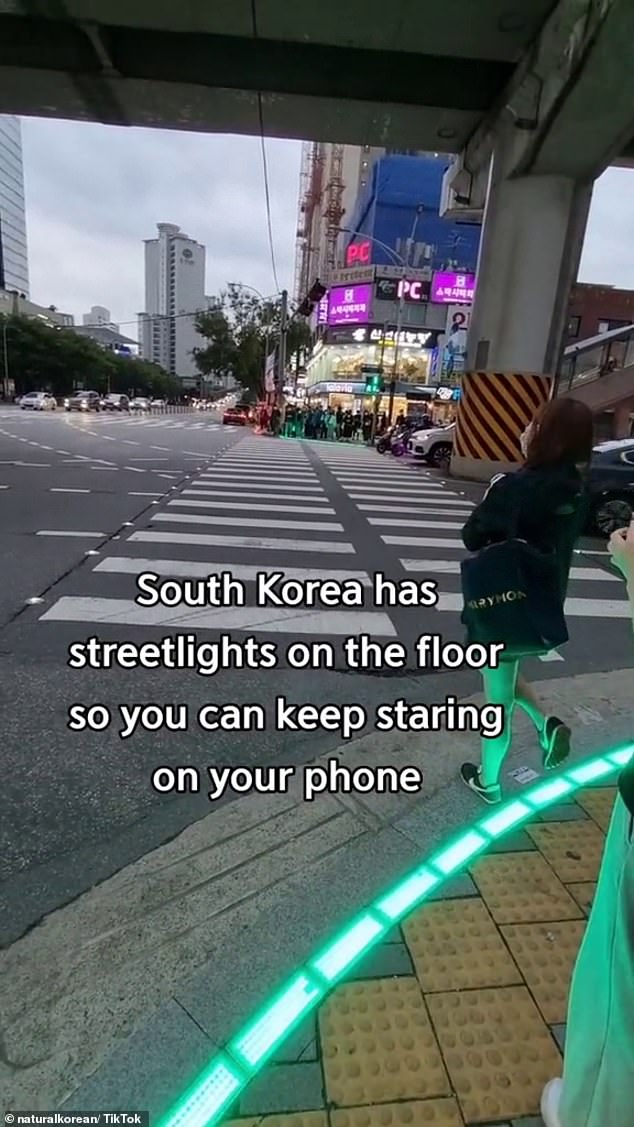 The invention was introduced in 2019, and has since seen ‘smombies’ be able to stay on their smartphones (pictured, the crossing lights)

‘This is how society should work. Adapt to the people without judging,’ another wrote.

According to Korea Herald, pedestrians accounted for 115 of the deaths in 2020, over half the total.