Thousands of South Korean schoolchildren have been sent home from 251 schools after they were forced to re-shutter amid a dramatic spike in coronavirus cases.

A total of 2.37 million children were allowed back to the classroom on Wednesday after months of online learning, but two days later 251 schools in Bucheon, west of Seoul, have been forced to close again.

It comes amid an outbreak of cases traced back to a warehouse run by South Korea’s biggest e-commerce firm, Coupang, in Bucheon, according to the BBC.

South Korea has seen cases jump by 56 in just 24 hours – despite managing to keep the daily number of cases in single figures until now.

The country had been praised for its early intervention of the virus, which has caused 269 deaths since the outbreak began earlier this year. 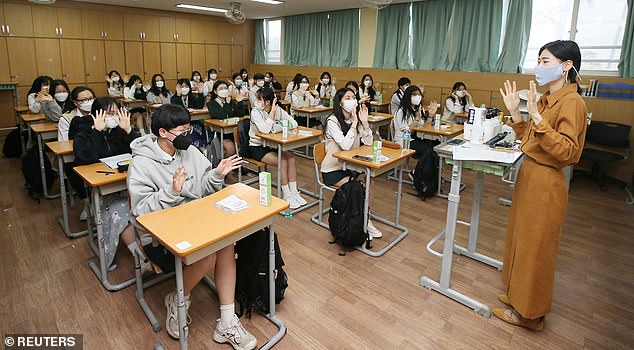 A teacher and high school students wearing protective face masks exchange greetings in a classroom as a school reopens in Cheju, South Korea, May 20, 2020

To date there have been 11,402 confirmed cases in the country.

Education Minister Yoo Eun-hae has delayed 561 school openings amid the latest hike in cases, as 79 new infections were recorded on Thursday – the highest in nearly eight weeks.

Traces of Covid-19 have been detected on the soles of distribution workers’ shoes and on clothing. One student, whose mother is an employee of the centre, tested positive for the virus.

‘We’ll take every measure we can take until safety is confirmed,’ a Coupang spokeswoman said.

‘We have decided to strengthen all quarantine measures in the [Seoul] metropolitan area for two weeks from tomorrow to June 14,’ he said. 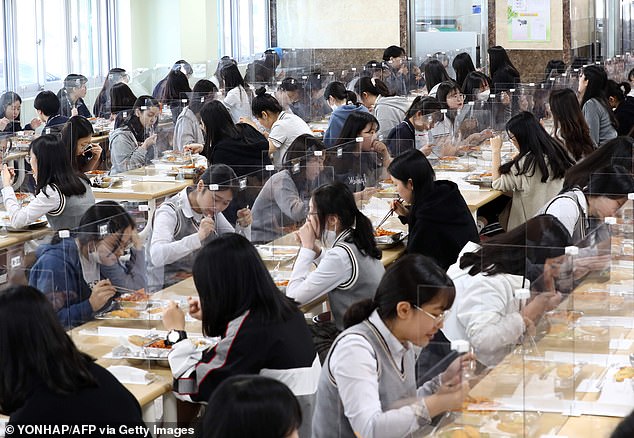 Students sit behind protective screens as they eat their lunch as a preventative measure against COVID-19 at a high school in Daejeon on May 20, 2020 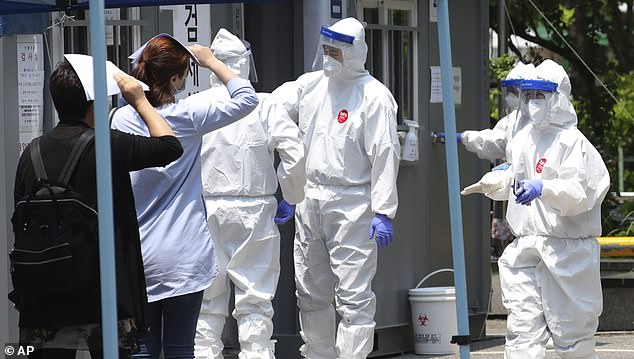 South Korea reported 79 new cases of coronavirus on Thursday, its largest single-day rise in almost two months, with a majority of cases linked to a warehouse near Seoul (pictured)

Citizens were also advised to refrain from social gatherings or going to crowded places – including restaurants and bars – while religious facilities were asked to be extra vigilant with quarantine measures.

Some 20,902 schools in the country were allowed to reopen on Wednesday.

‘If students can’t return to school under the current prevention regime there might be no offline schools at all this year,’ Ms Yoo warned during a meeting a a government complex in Sejong earlier this week.

On their first day back to school, students lined up for temperature checks and were given sanitisers to wash their hands as they entered school premises. 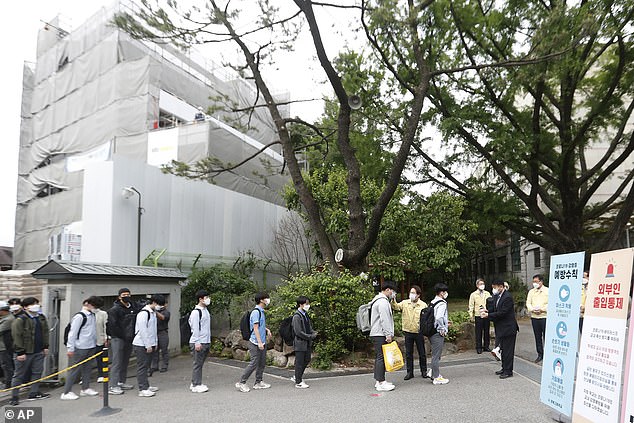 Senior students line up to get their body temperatures checked at the Kyungbock High School in Seoul, South Korea, Wednesday, May 20

But for 66 schools in Incheon, Seoul, the excitement was short lived as students were evacuated and sent home soon after the reopening when two pupils were found to have contracted the virus.

Authorities decided to temporarily close all schools in their neighbourhood as students there may have come in contact with the infected students earlier, a spokesman at the Incheon Metropolitan City Office of Education said.

The episode illustrated the challenge of reopening schools while at the same time seeking to prevent transmission of the virus.

Inside the school buildings, students were asked to wipe their desks and sit apart according to social distancing guidelines, with some classes setting up partitions between desks. 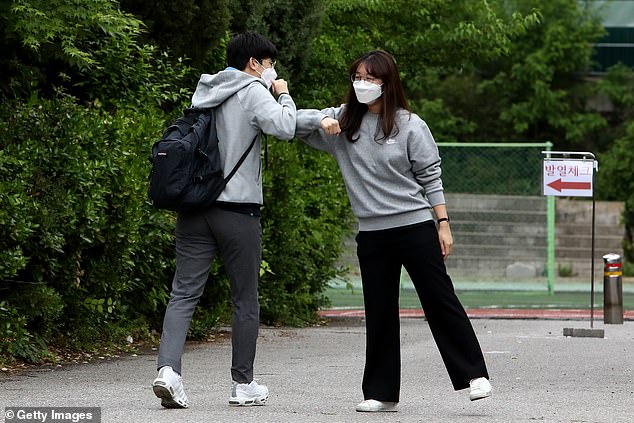 A teacher (right) welcomes a student back to school with an elbow bump at Kyungbock high school on May 20, 2020 in Seoul, South Korea

Ms Yoo said: ‘Concerns over small infection clusters still remain and no one can predict what kind of situation will arise at schools.’

While final-year students are required to come to school every day, younger pupils will shift between online and offline classes to ensure school buildings are not overcrowded.

Oh Chang-hwa, student president of Kyungbock High School in Seoul said: ‘It’s really exciting to meet my friends and teachers face to face, but we have to strictly follow the disinfection guidelines. 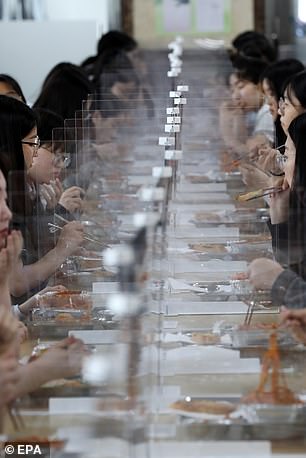 ‘I am very worried but it’s still nice to see them again.’

South Korea endured one of the worst early outbreaks of the virus — at one point the second-worst hit nation after mainland China — prompting officials to delay the reopening of schools in early March.

But it appeared to have brought its outbreak under control thanks to an extensive ‘trace, test and treat’ programme.

Around 440,000 final-year students, who will in December take the university entrance exam that is crucial in the education-obsessed country, are the first to return to schools, with other years following in stages over the next several weeks.

Lower-level students were set to return to school in phased steps by June 8.

South Korea’s new school year was supposed to start in early March, but it was delayed several times due to worries about the spread of the coronavirus. 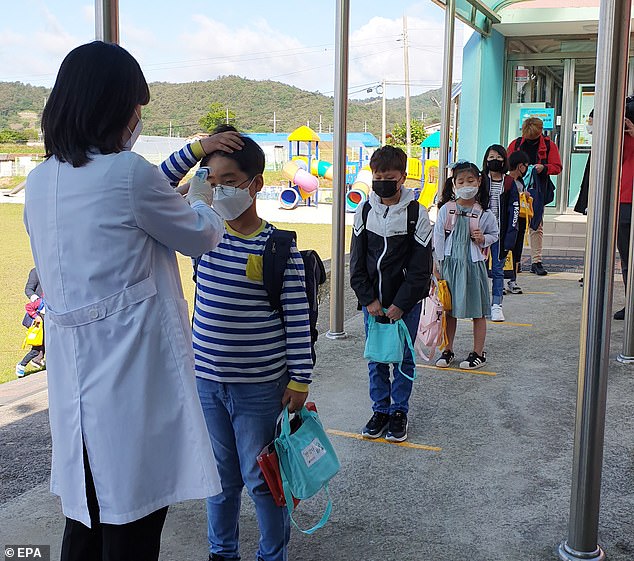 Pupils have their temperatures checked at an elementary school in Muan, South Jeolla, South Korea, 20 May 2020 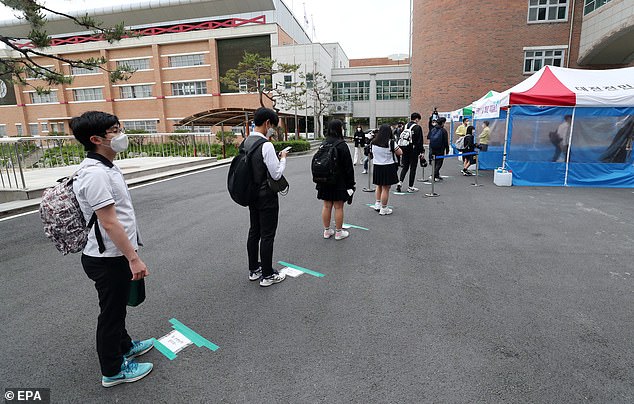 Students form a long line to have their temperatures checked before entering class at Jeonmin High School in Daejeon, South Korea, 20 May 2020 A student walks past a thermal scanner to have his temperature checked before entering class at Geumcheon High School in Cheongju, South Korea, 20 May 2020 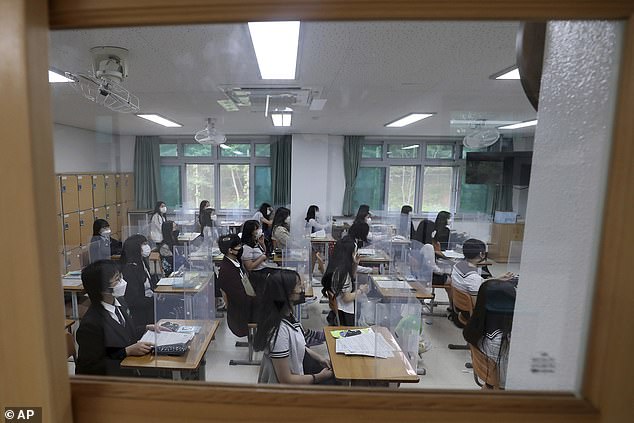 Senior students wait for a class to begin with plastic shields placed on their desks at Jeonmin High School in Daejeon, South Korea, Wednesday, May 20 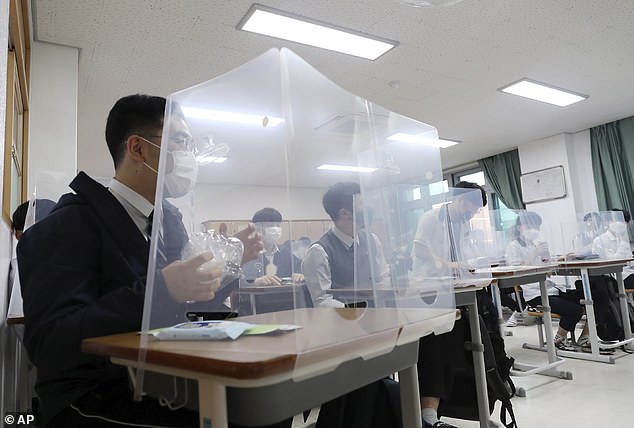 Senior students wait for a class to begin with plastic shields placed on their desks at Jeonmin High School in Daejeon, South Korea, Wednesday, May 20, 2020 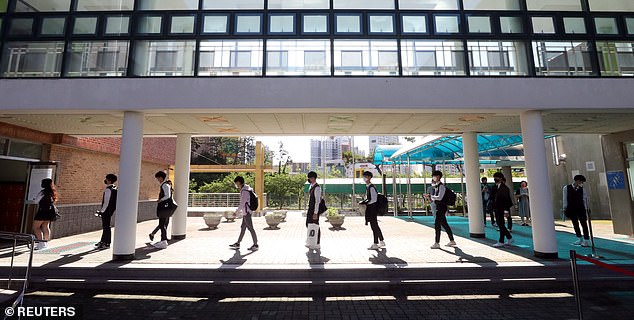 High school students wearing protective face masks maintain social distancing as they stand in a line to have their body temperature checked at a high school, in Ulsan, South Korea, May 20 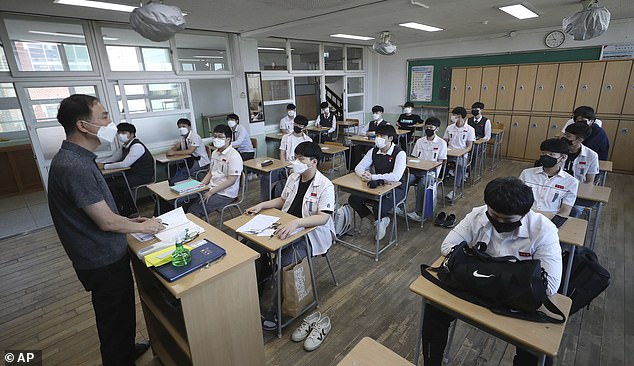 About 5.4 million students in South Korea have been subsequently taking classes online.

At Seoul’s Kyungbock High School, Cho Hee-yeon, the education superintendent in the capital, used a digital ear thermometer to check students’ temperatures at the main gate while another official placed liquid sanitiser on the hands of those students.

Signs that read ‘no outsiders are allowed to enter the school premises’ were put up.

Cho Hee-yeon, Seoul’s top education superintendent, said: ‘I am here to see students returning to school while praying that there won’t be any coronavirus patients among our students in 2,200 schools.’

South Korea relaxed much of its social distancing rules in early May. But it quickly saw a small but sudden spike in new infections linked to nightclubs in Seoul.

Those latest outbreaks had been on a downward trend until Tuesday, May 19. 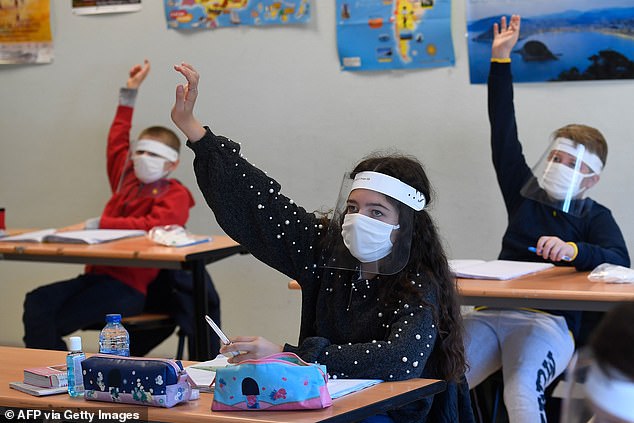 FRANCE: Schoolchildren wearing protective mouth masks and face shields attend a course in a classroom at Claude Debussy college in Angers, western France, on May 18, 2020 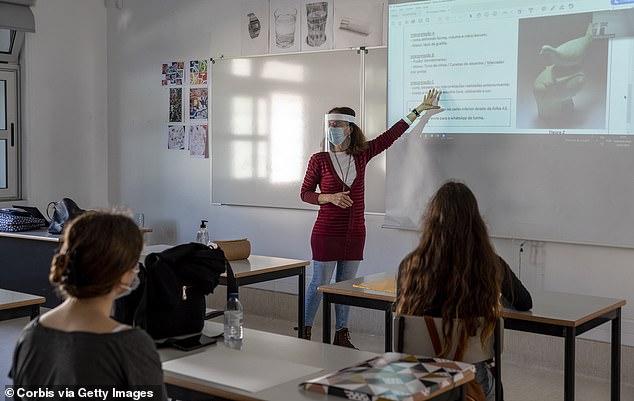 PORTUGAL: A teacher wears a protective visor and the mandatory mask during class in the Agrupamento de Escolas Frei Gonçalo de Azevedo on May 18, 2020 in Cascais 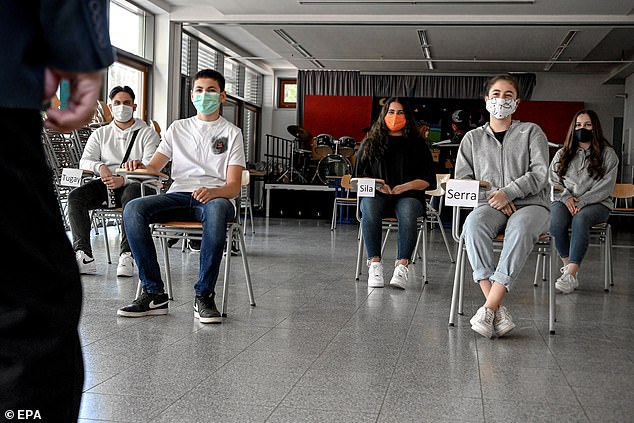 Across the world thousands of students have been making a cautious return to schools with countries such as Germany, Canada, Australia, China, Switzerland, Denmark, Greece, the Czech Republic, Cyprus and Israel allowing schools to reopen with measures including splitting classes in half and teaching them at different times of the day to keep pupils safe.

Pupils in Finland, who returned on Thursday, were pictured giving each-other air hugs as a greeting while students in the Netherlands were separated by plastic dividers as they returned to their desks.

That stands in stark contrast to the UK which has yet to produce a plan for getting the majority of students back to classes during this school year – putting the country alongside Spain and Italy, where only a few children are expected to return to classes before the summer holiday.

The UK Government wants a phased reopening from June 1, with Reception, Year 1 and Year 6 pupils going back first as a row rumbles on about whether it is safe with Education Gavin Williamson insisting getting children back to school on that date is vital for their development and prospects so teachers should ‘do their duty’. 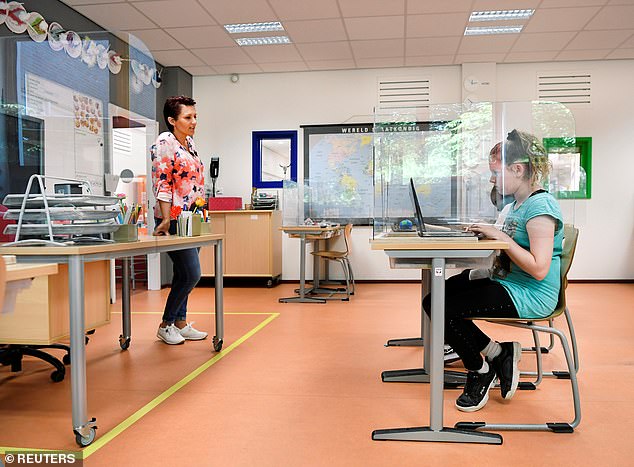 NETHERLANDS: A teacher standing inside her taped-off safe zone speaks to pupils who sit at their desks behind plastic shields after elementary schools reopened 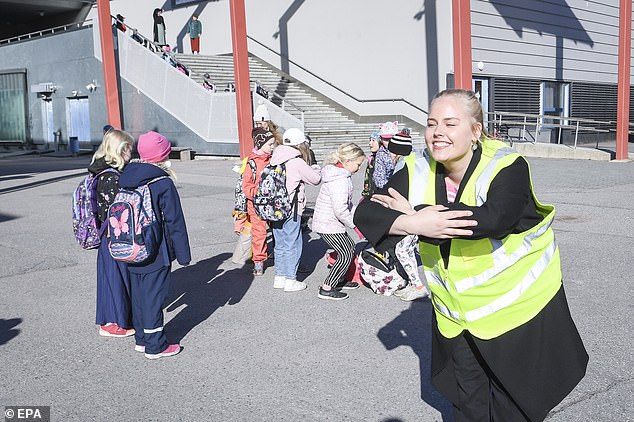 FINLAND: A teacher signals a warm welcome as children arrive to start the primary school in Helsinki, Finland, after schools were reopened on Thursday, May 14 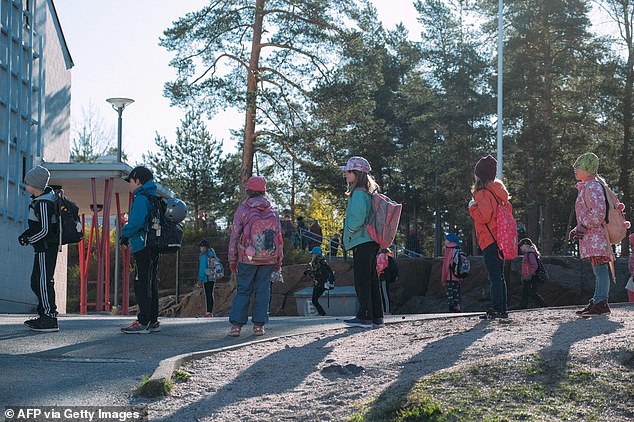 FINLAND: Pupils keep the social distances before entering Eestinkallio primary school, as it re-opens after lockdown measures were eased across Finland 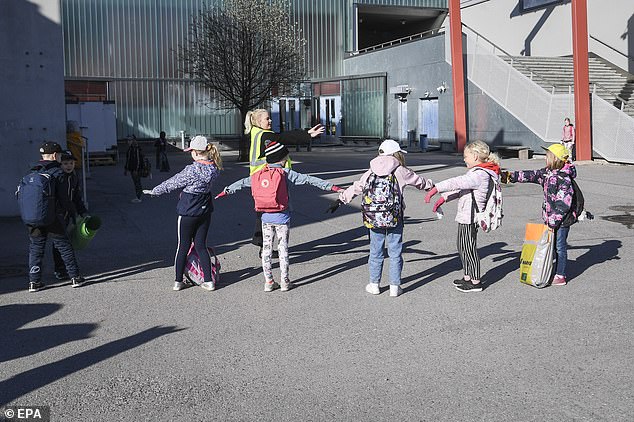 FINLAND: Students – some of whom are wearing gloves to prevent against coronavirus – are shown how to properly socially distance from one-another

Scientists are divided on the risks of sending children back to school – while they largely escape coronavirus symptoms they are known to be carriers of the disease and there are fears they will infect adults around them.

But restarting classes will be key to getting the global economy back up and running since parents who are forced to keep their offspring at home will be unable to return to their jobs.

There are also fears it will cause lasting economic damage for a ‘lost generation’ whose learning will be irreparably damaged by being kept away from their teachers, leading to a skills shortage in the future.