On the whole, the architecture of the former Soviet Union was uniform and dreary – but a recently published photography book reveals that there were some gems, from a ‘flying saucer’ building to an office block that resembles a game of Jenga.

Soviet Cities: Labour, Life & Leisure was created by Russian photographer Arseniy Kotov after a tour of post-Soviet republics between 2016 and 2020 during which he stayed in over 200 cities.

All the pictures presented in the book, published by Fuel, were taken over this period and show, says Mr Kotov, what remains of the USSR civilisation.

He says: ‘Through my photographs I wanted to show outstanding buildings and constructions, to show where Soviet people lived and how Soviet cities once looked.

‘Most Soviet city buildings were fabricated according to standard designs. But as I visited more cities, I began to notice unique buildings and features of urban planning.’

Here we present 15 of Mr Kotov’s fascinating images, an ode to communist construction.

The Assembly Hall of the Ukrainian Institute of Scientific and Technical Expertise and Information in Kiev, Ukraine. Mr Kotov says it was constructed in 1971 and was known as ‘the flying saucer’. It currently stands empty 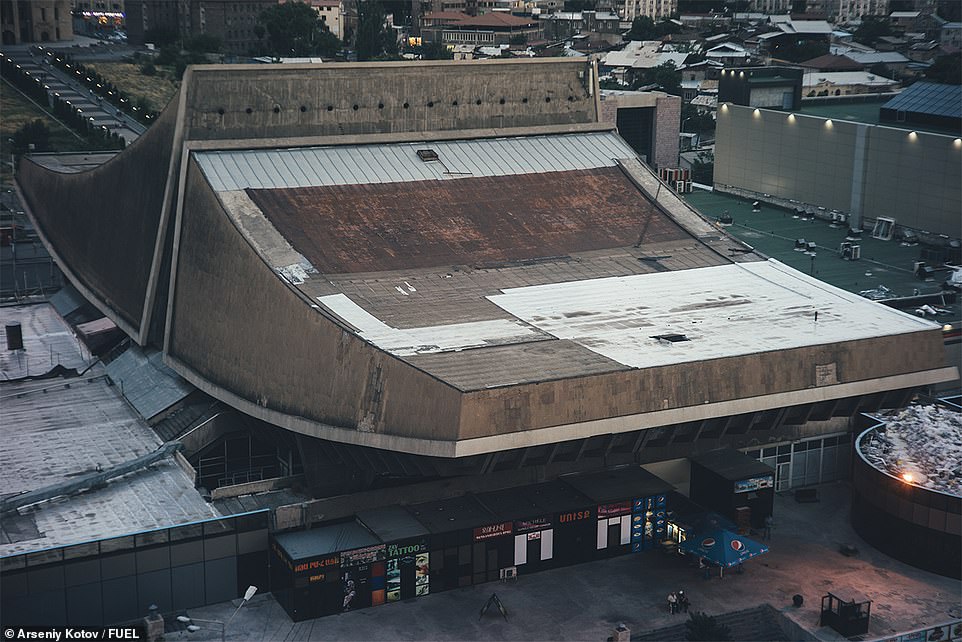 A cinema in Yerevan, Armenia, that was built in 1975 and intended to resemble the two peaks of Mount Ararat. Mr Kotov adds: ‘Originally containing two auditoriums seating 1,600 and 1,000, with a small hall accommodating 280, the complex also included exhibition areas, a dance floor and a café. The interior has since been destroyed, and today it serves as a trade pavilion’ 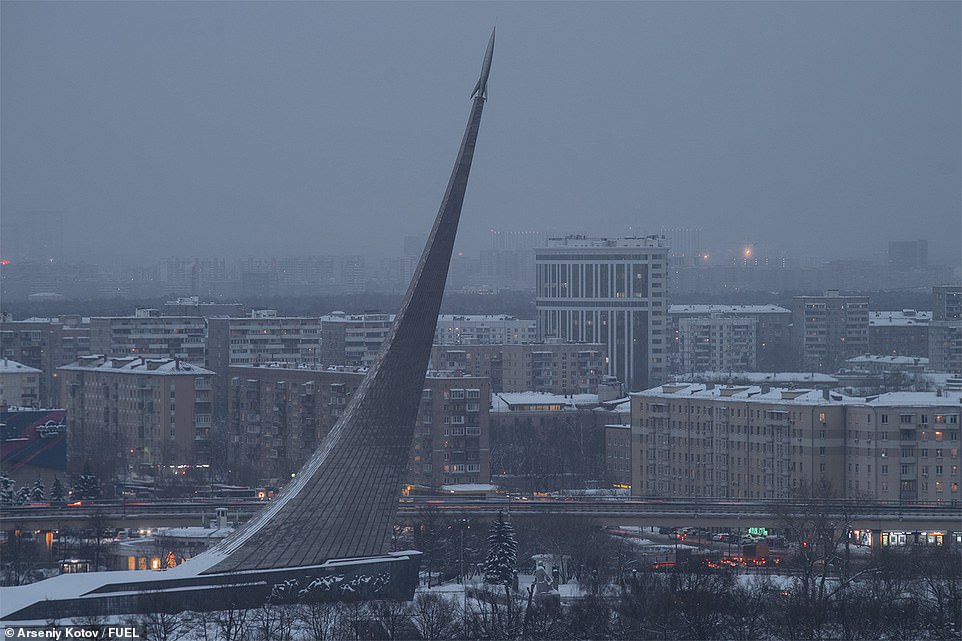 Monument to the Conquerors of Space in Moscow. Built in 1964, ‘it was intended to reflect an image of the USSR as a modern and progressive country, exploring space for the benefit of the world’, says Mr Kotov 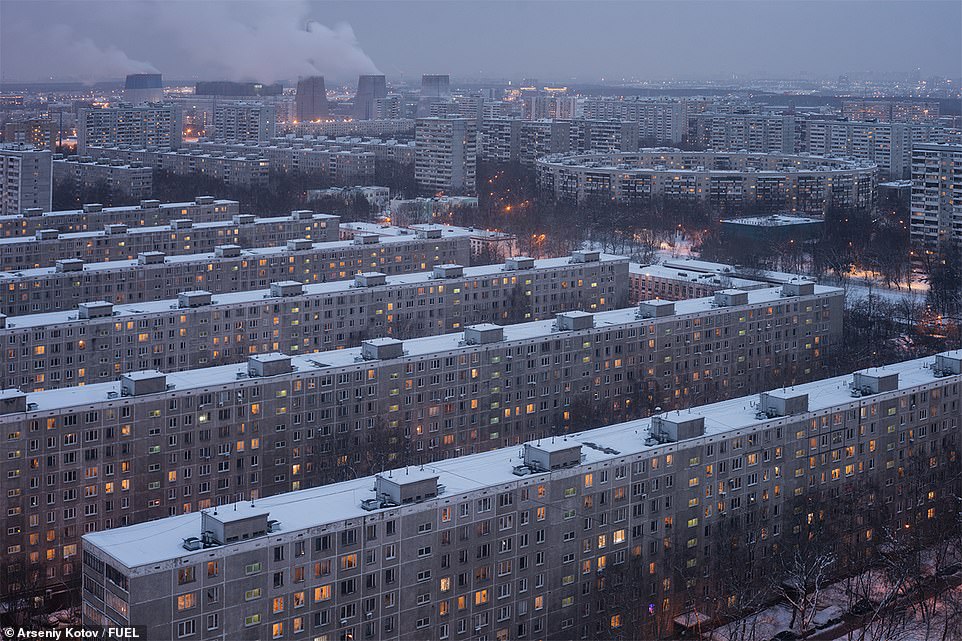 House estates, Moscow style. This development was constructed in 1974 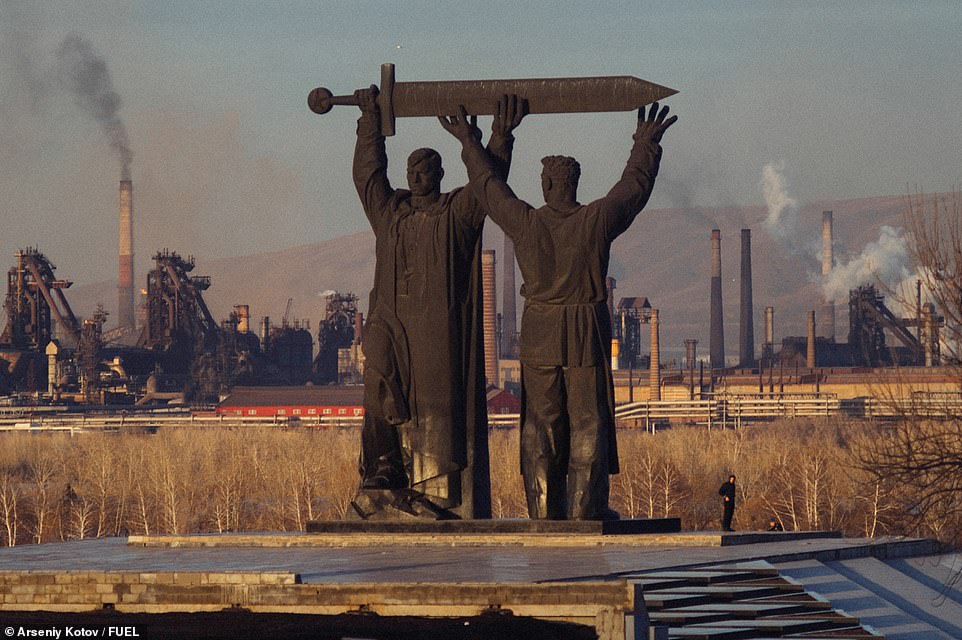 This monument was built in Magnitogorsk, reflecting the fact that a third of Soviet projectiles and half of the tanks during World War II were made of steel from the city, reveals Mr Kotov 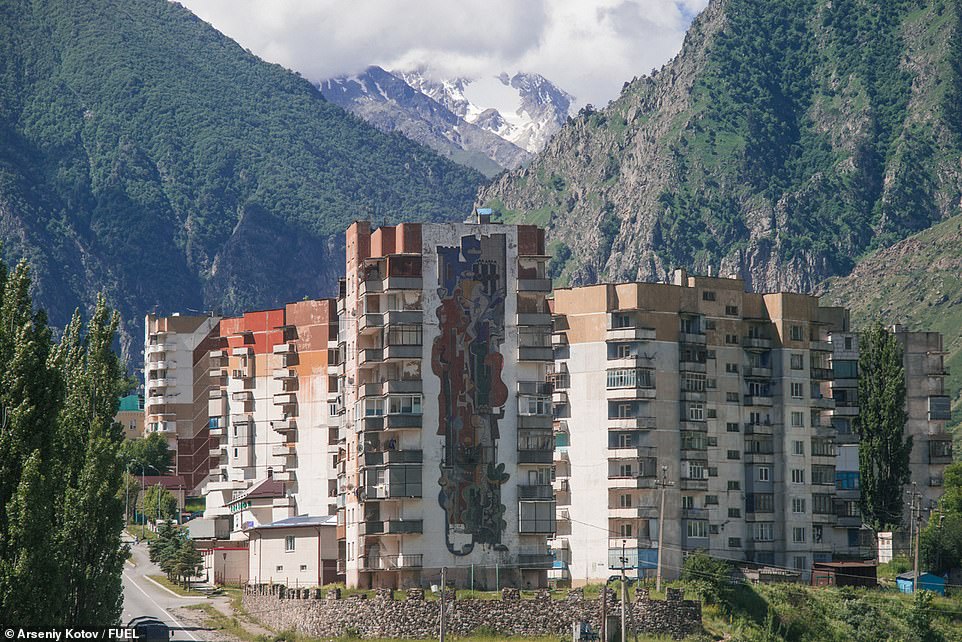 A residential building in the city of Tyrnyauz, which was founded in 1934, following the discovery of the Tyrnyauz tungsten-molybdenum deposit. Mr Kotov says that with the collapse of the USSR and the closure of the plant, the number of residents declined rapidly and that between 1989 and 2002 the population had reduced by a third to 21,000 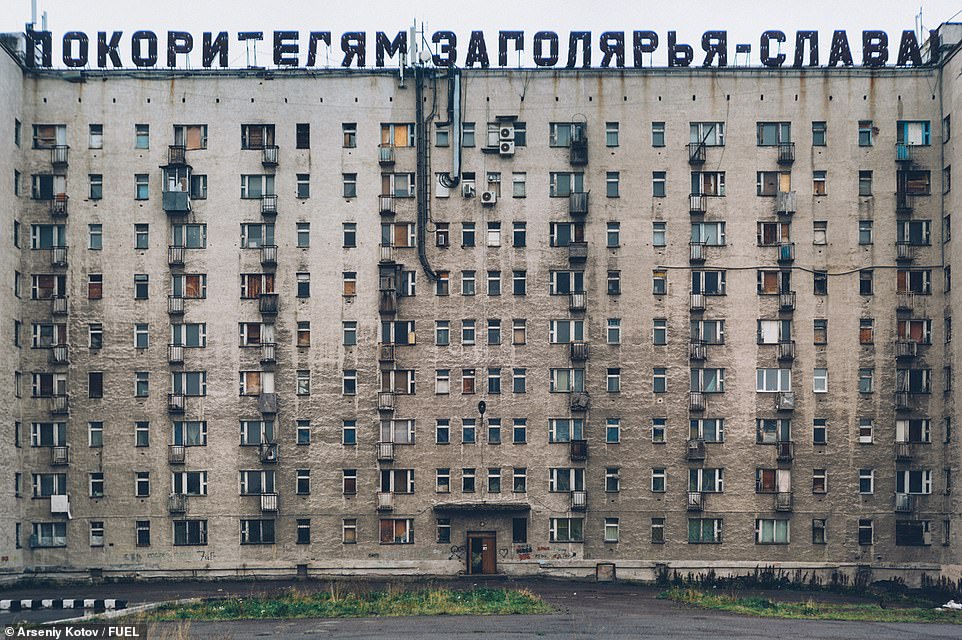 Hotel-style dormitories in Vorkuta, built in 1981. The town grew from a village built for workers toiling in coal deposits in the 1930s 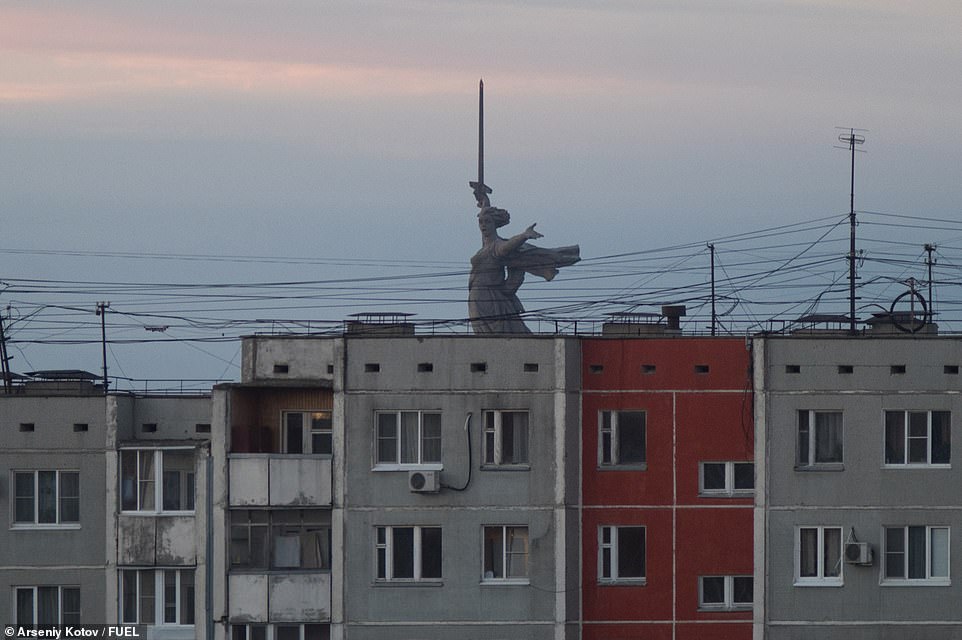 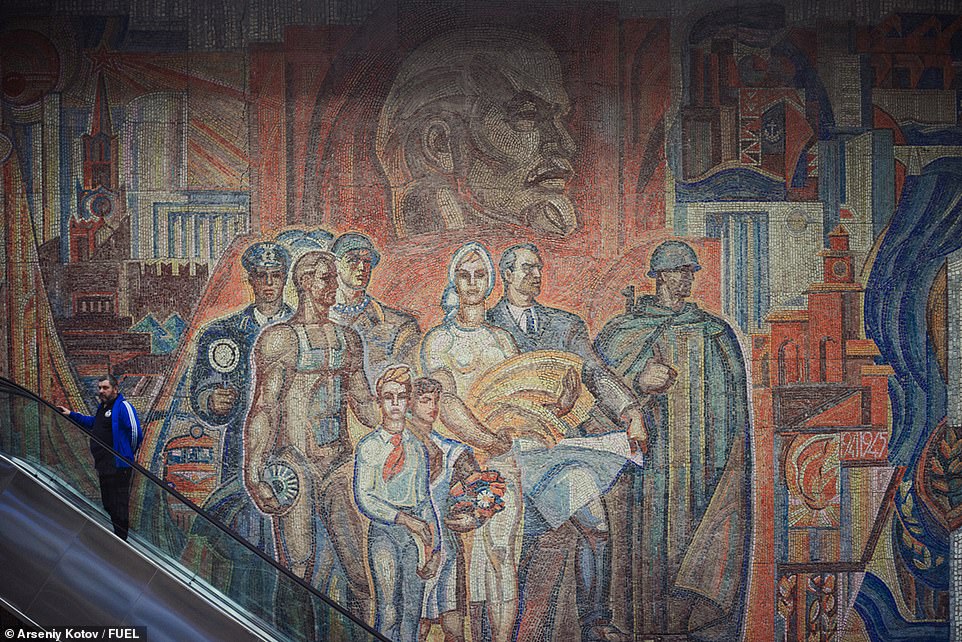 A stunning mosaic in Nizhny Novgorod Station, which was built in 1971 and designed by V Lyubimov 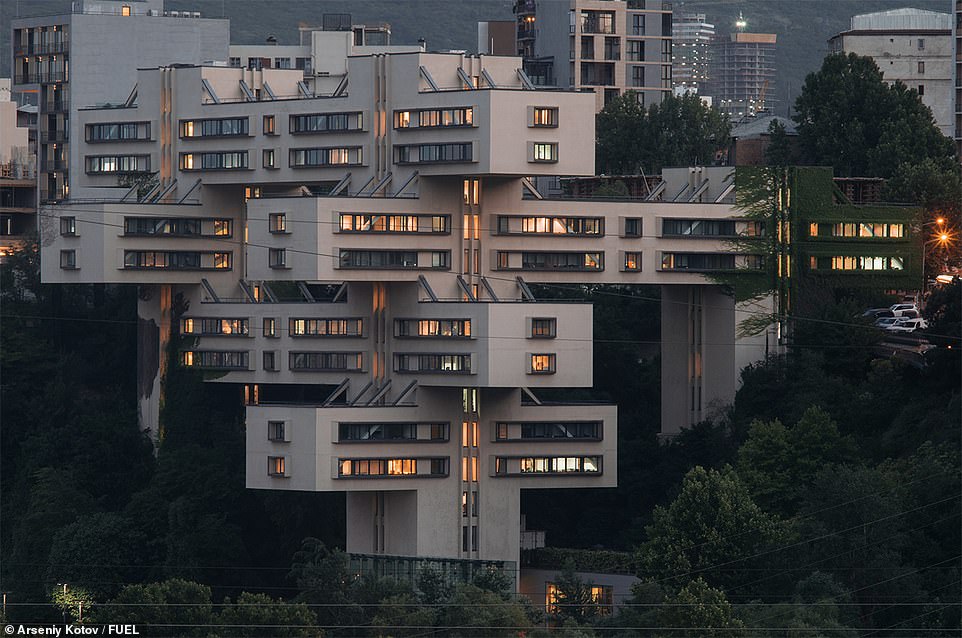 Anyone for a game of Jenga? With office blocks? This is the Ministry of Highway Construction of the Georgian SSR, Tbilisi. Built in 1974, it draws inspiration, says Mr Kotov, from the shape of a forest. He writes: ‘This structure is based on three “tree trunks” – vertical columns containing lifts and stairwells – with horizontal “tree crowns” of office blocks running through them. The intention of the concept is to raise the building above the ground, allowing nature to thrive in the space below’ 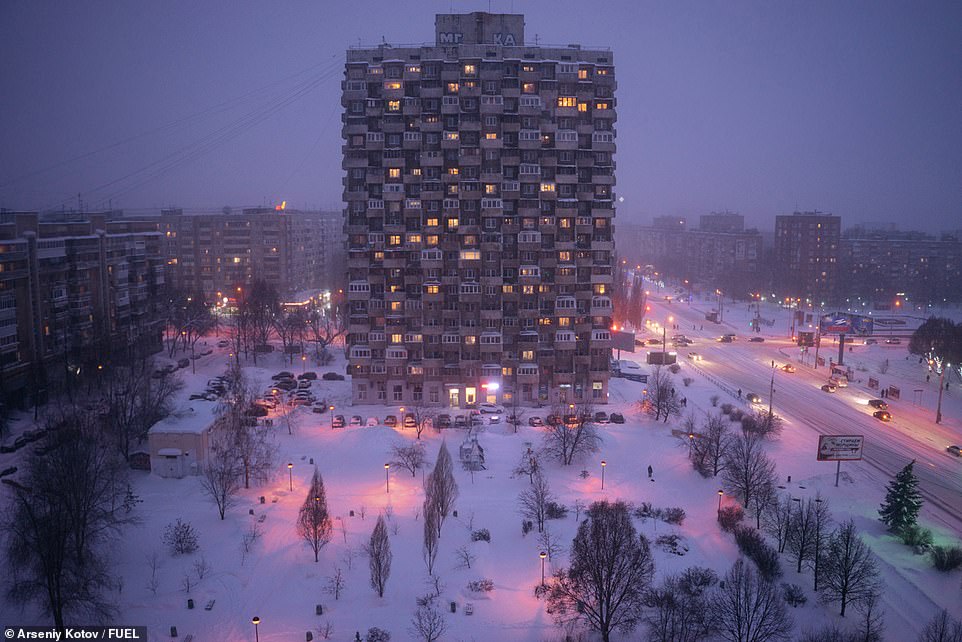 This picture shows a 20-storey monolithic residential block in Samara. It is one of five similar buildings created by architect Alexander Belokon, reveals Mr Kotov, with others located in Minsk and Ufa 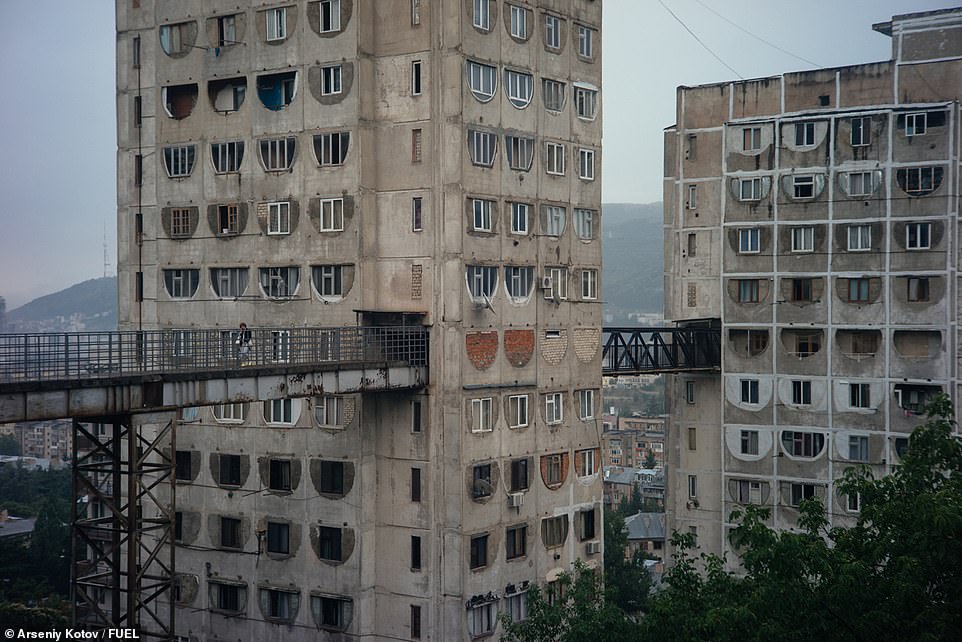 A residential building complex in Tbilisi, Georgia, that was built in 1976 and features an eighth-floor walkway that pierces two of the blocks 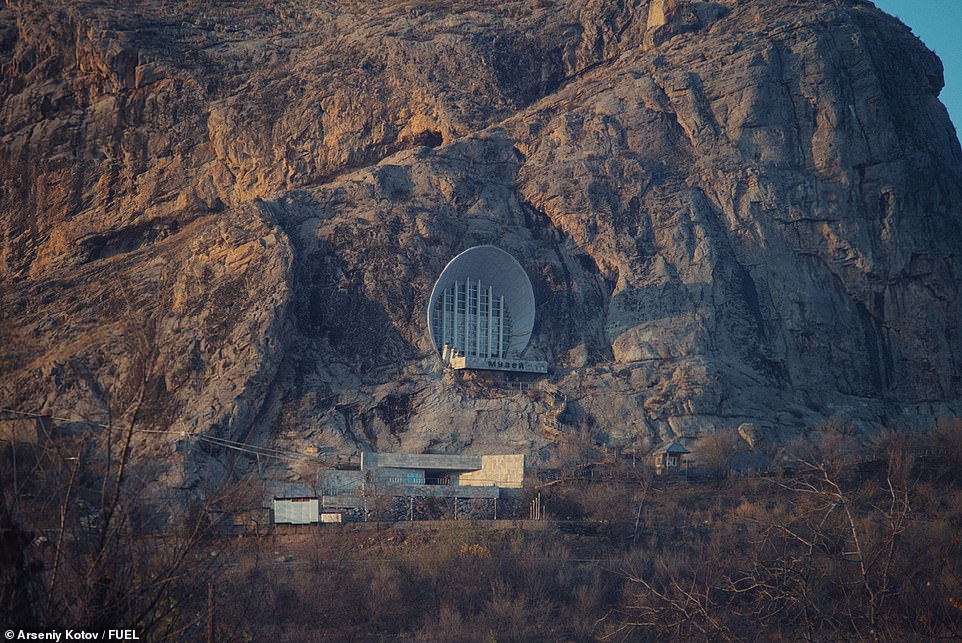 The Sulaiman-Too Sacred Mountain in Kyrgyzstan, which was built in 1978 and has a concrete arch with panoramic glazing over the mouth of a Unesco-listed cave containing ancient rock inscriptions 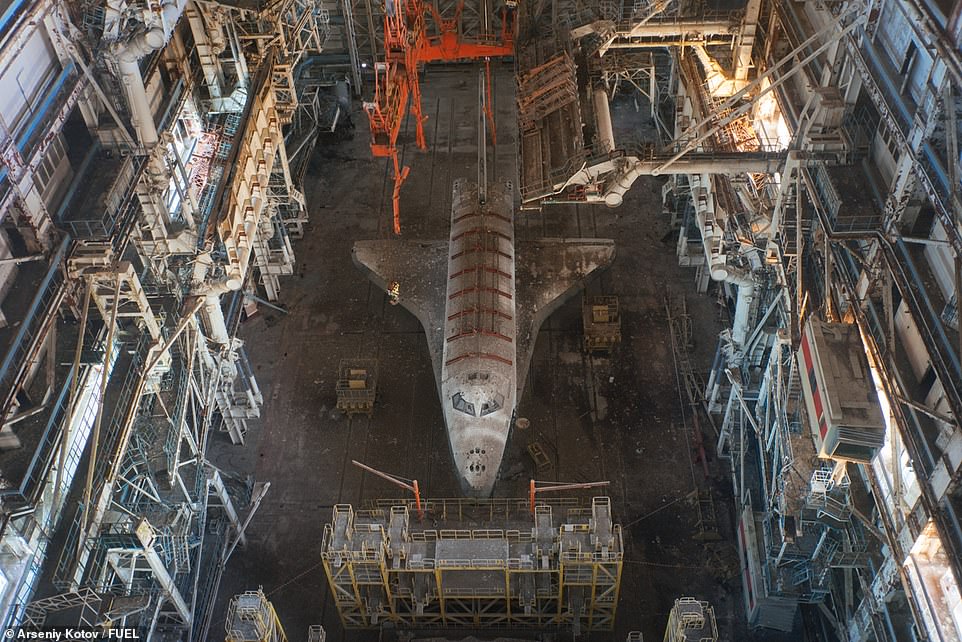 The final assembly and refuelling hangar for the ‘Buran’ space programme at the Baikonur Cosmodrome in Kazakhstan. In 1990 the second spacecraft in the ‘Buran’ programme, ‘Burya’ (Storm), and its full-size model were entombed here. Work on the programme was halted due to the collapse of the USSR and the project was officially terminated by President Boris Yeltsin in 1993, writes Mr Kotov 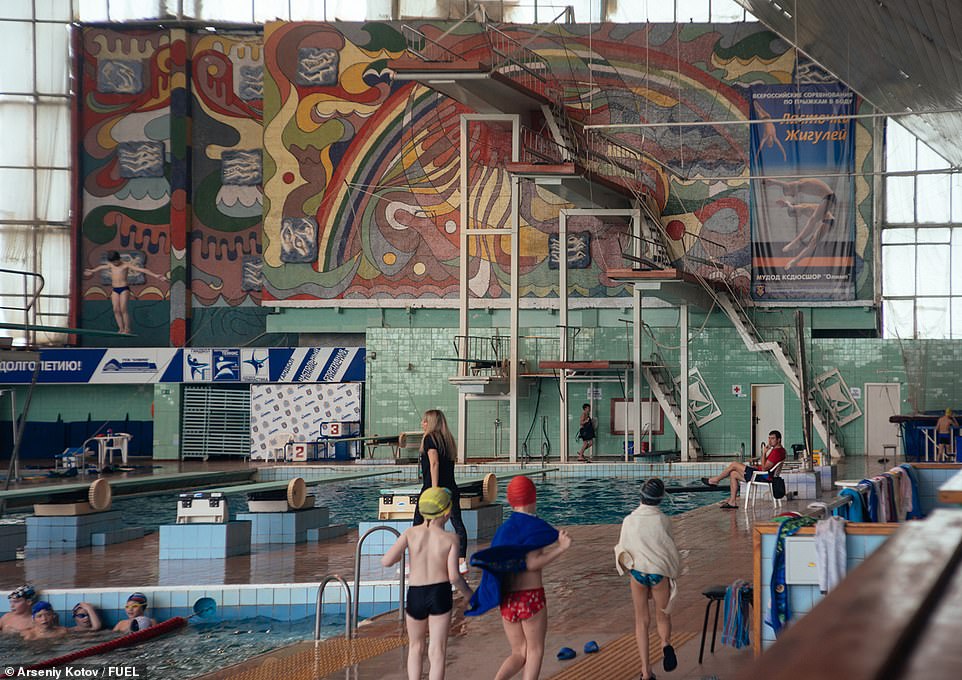 The ‘Olympus’ swimming pool in Tolyatti and its eye-catching mosaic. It was built in 1985 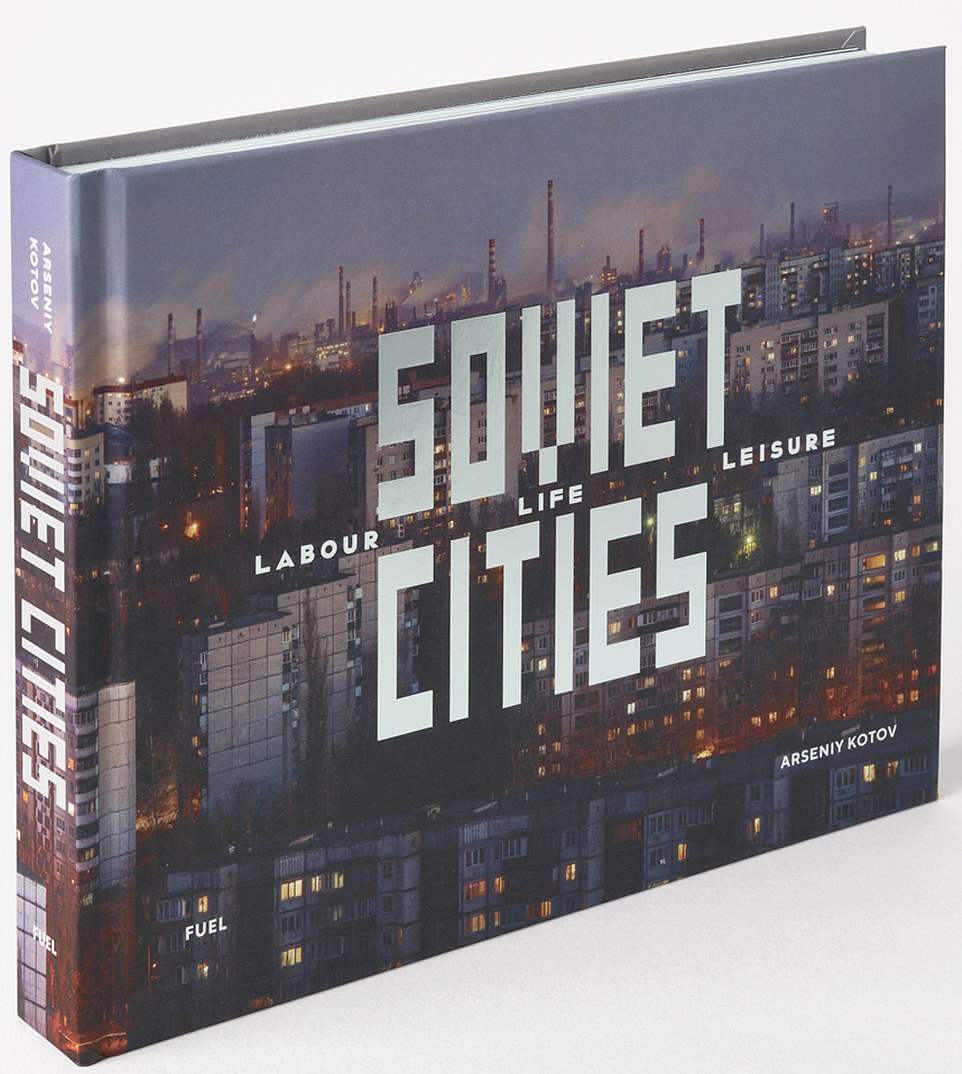