World View Enterprises is working on the balloon-based system in Tucson, Arizona, where it says it will take people up to an altitude of 100,000ft or 18 miles.

This is some way off the 50 mile altitude NASA considers space, but World View says its passengers will see the curvature of the Earth and blackness of space.

Rides are expected to last about six to eight hours, but they plan to also offer a five day adventure that will see passengers fly over historic landmarks.

World View says each site will be an area of natural beauty, or cultural and historical significance – including the Great Barrier Reef, Pyramids of Giza and other landmarks.

Artist impression of the capsule returning back to Earth over the Arizona desert. Future flights will operate from beauty spots around the world 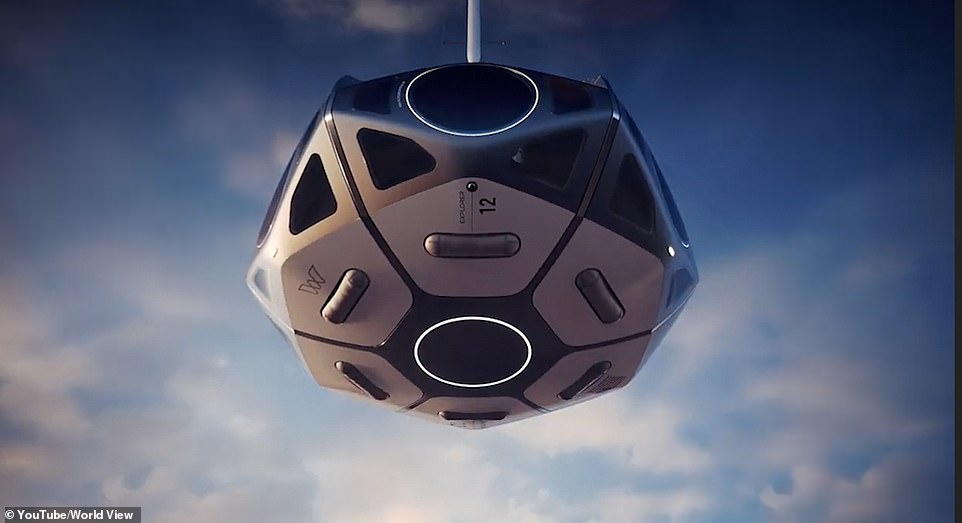 The final design of the capsule hasn’t been confirmed, although, as this artist impression shows, it is likely to have plenty of windows to witness the view outside 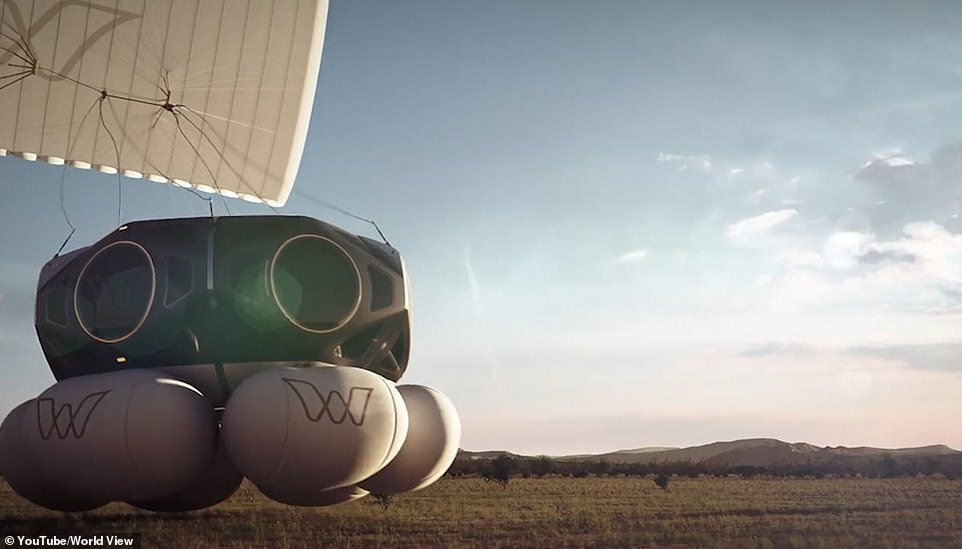 Further balloons will be used to cushion the landing, when travellers return to Earth as much as eight hours after taking off. Artist impression

Layers of the atmosphere

Each of the capsules taking people to the stratosphere will be able to carry eight-passengers, and the ride is described as ‘smooth and gentle’.

Unlike other space tourism options, such as Virgin Galactic and Blue Origin, which includes some rocket travel and g-forces, World View says its option suits all ages and fitness levels.

The firm says the trip to the stratosphere would be a gentle climb, ending in a view of the curve of the Earth.

CEO Ryan Hartman says the ambition is to ‘change the conversation around space tourism,’ adding that it isn’t a joyride, it is ‘much bigger and more important.’

‘We’re redefining space tourism for participants by spending hours at apogee, building memories around some of Earth’s most magnificent wonders,’ he added.

The firm, which has most recently been focusing on sending scientific payloads into the stratosphere using balloons, was founded on the idea of human travel.

It has revived those plans, and has already sold out its entire first flight to the nonprofit Space for Humanity, who will offer spaceflight experiences to people who couldn’t otherwise afford tickets.

The first flights will start from Page in Arizono, which is near the Grand Canyon, but they hope to add the Great Barrier Reef in Australia, Pyramids of Giza in Egypt and other landmarks, to the list of starting locations in the future. 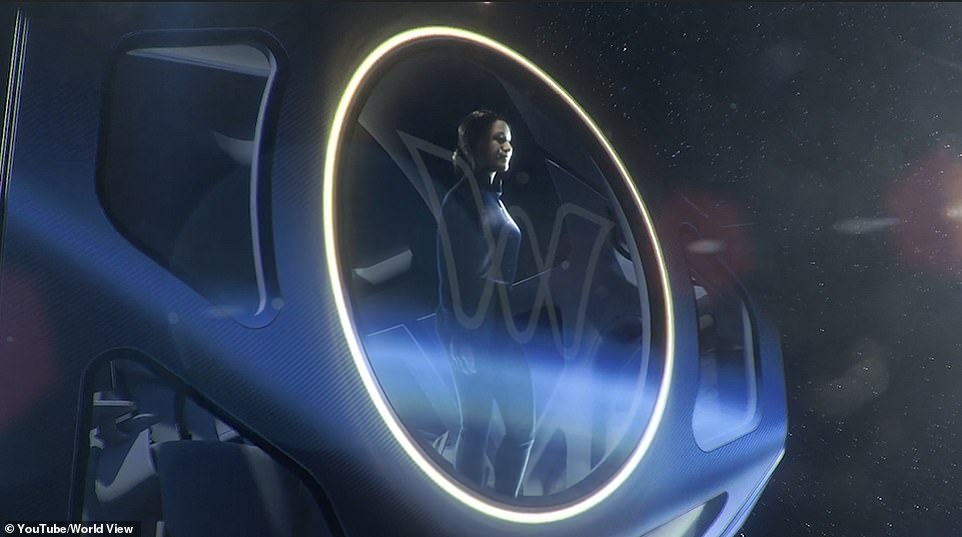 Flights to the stratosphere, where the curve of the Earth will be visible, will start at £36,000 per seat in the eight seater capsule

The goal, said Hartman, is to offer a form of space travel with longer flights at a much lower price than the suborbital flights offered by Blue Origin and Virgin Galactic.

The firm is still working on the final design of the capsule, and needs approval from the Federal Aviation Administration before it is able to offer commercial flights, but is confident the first flight will be around 2024. 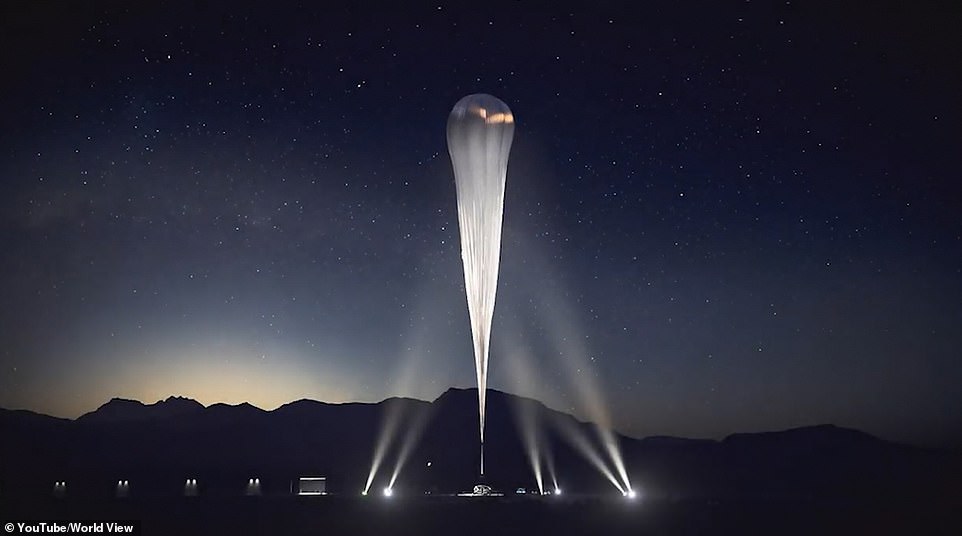 Passengers will be taken up 18 miles above the surface in a capsule carried by massive balloons, spend up to 12 hours in the stratosphere, before gliding back to Earth 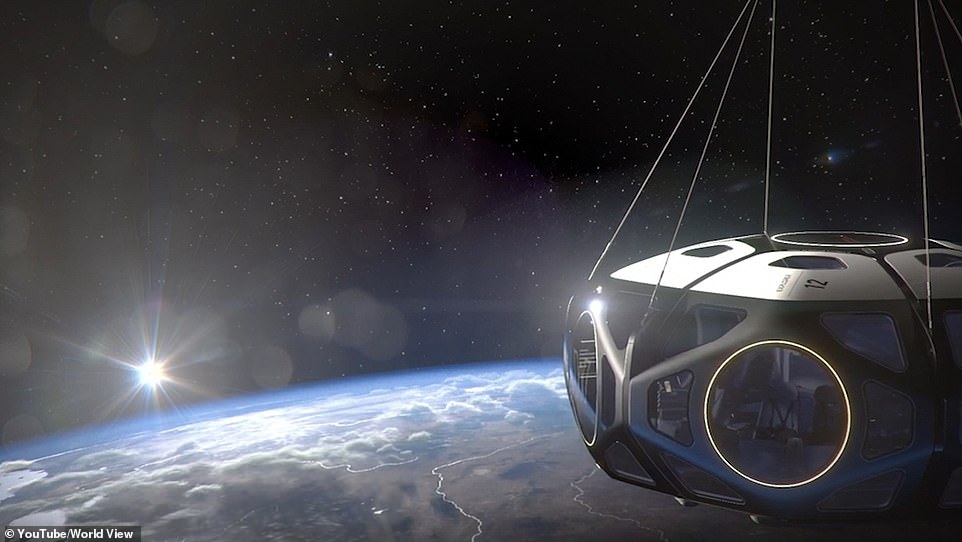 World View was formed a decade ago to develop a stratospheric balloon system to carry humans and give them an ‘aspect of the spaceflight experience’ without sending them into space.

However, it shifted to focus on sending imaging and communication equipment into the stratosphere, where it can remain over a specific area for ‘weeks at a time.’

Hartman hopes that the new version of its human balloon flights will complement suborbital launches by Blue Origin and Virgin Galactic, adding to the market. 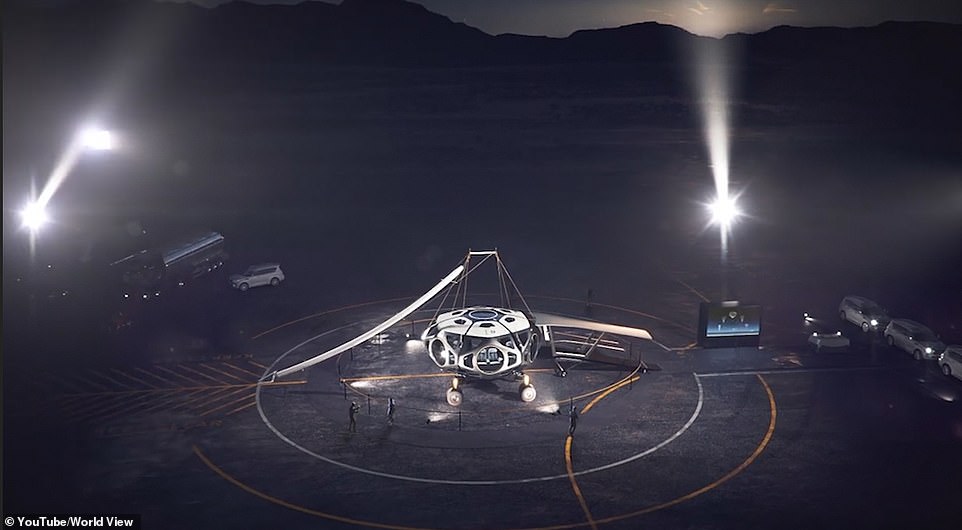 It isn’t clear yet what the capsule will look like, but this artist impression of the ground view preparing for launch, suggests a ‘spectacle’ will be involved in the experience 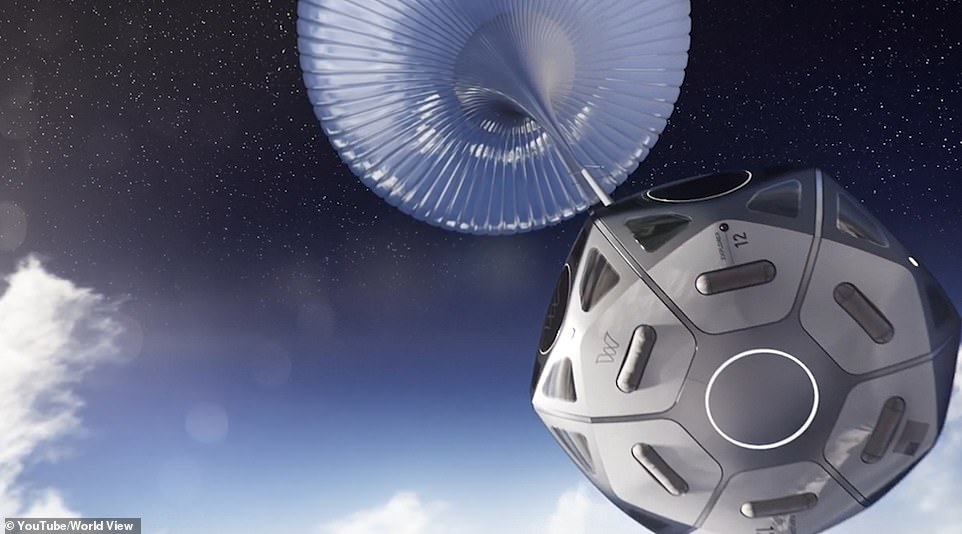 The firm says it pkans to offer passengers five days of flights over varying locations, including the Great Barrief Reef and Great Pyramids of Giza

‘I think that many of their customers will look at what we have to offer as an additional way to experience viewing our Earth, and so we don’t consider ourselves competing head-to-head with them,’ he told SpaceNews.com.

Unlike Virgin Galactic and Blue Origin, who predict that in the future they could be flying dozens of times per week from multiple spaceports, Hartman said World View has a ‘supply issue’ given wind and climate requirements for balloon flight.

He said the firm predicts it will be able to do abut 100 per year at any given location, but that would be reduced by wind conditions, adding ‘demand won’t be limited.’

A telescope will be launched into the upper atmosphere strapped to a balloon the size of a stadium next year, and it will be able to take images that rival Hubble, scientists behind the project claim.

Named the SuperBIT, it will fly up 28 miles above the Earth’s surface and circumnavigate the globe while taking images of the universe.

It will make its operational debut in April 2022 when it will be deployed from New Zealand by the team from the University of Toronto and NASA.

The telescope has a 0.5 metre diameter mirror and will be able to remain in the air for months at a time thanks to a new NASA superpressure balloon design.

Unlike the James Webb telescope, launching in November and working in infrared, SuperBIT will operate in similar frequencies of light to Hubble, leaving the scientists behind the project to tout it as a natural successor to the ageing observatory.