The moment four astronauts hugged and embraced their new crew-mates on the International Space Station after arriving on a SpaceX capsule was broadcast by NASA on Monday.

The current inhabitants of the ISS welcomed their new crew mates with open arms upon their arrival in jubilant scenes broadcast by NASA.

‘We can´t wait to have you on board,’ she added after the two spacecraft were latched together.

The ‘Resilience’ spacecraft docked autonomously with the space station some 260 miles (400 kilometers) above the Midwestern US state of Ohio at 11:01pm on Monday (0401 GMT Tuesday), completing a 27.5-hour journey. 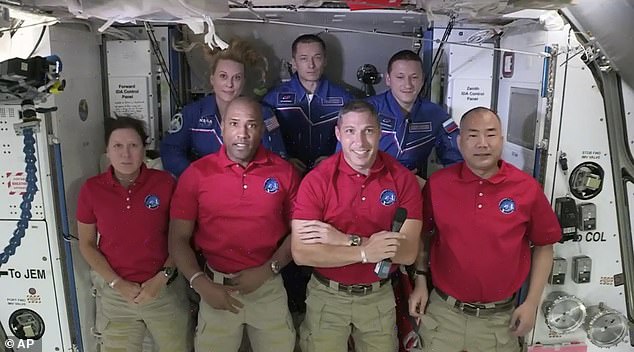 The crew’s three Americans – Michael Hopkins, Victor Glover and Shannon Walker – along with Japan’s Soichi Noguchi, each floated in zero gravity through a hatch and onto the ISS, where they were cheered and embraced by the station’s three crew members.

‘Thank you for letting me get to say hello to you all,’ said NASA chief of human spaceflight programs Kathy Leuders, in a video message beamed up to the astronauts. ‘I just want to tell you how proud we are of you.’

Hopkins and his crew – Victor Glover, Shannon Walker and Japan’s Soichi Noguchi – join two Russians and one American who flew to the space station last month from Kazakhstan. Glover is the first African-American to move in for a long haul. A space newcomer, Glover was presented his gold astronaut pin Monday.

The four named their capsule Resilience to provide hope and inspiration during an especially difficult year for the whole world.

They broadcast a tour of their capsule Monday, showing off the touchscreen controls, storage areas and their zero gravity indicator: a small plush Baby Yoda.

Walker said it was a little tighter for them than for the two astronauts on the test flight.

‘We sort of dance around each other to stay out of each other’s way,’ she said. 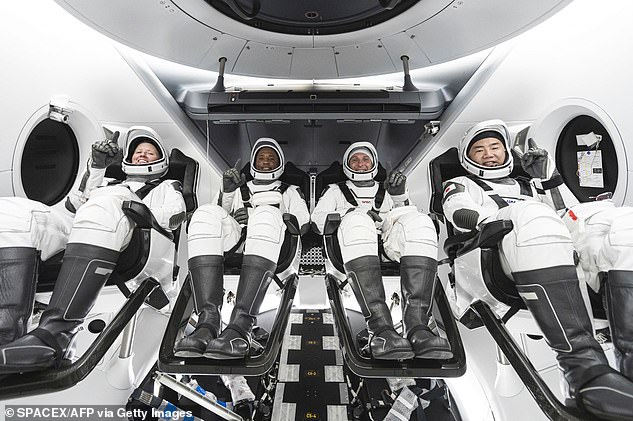 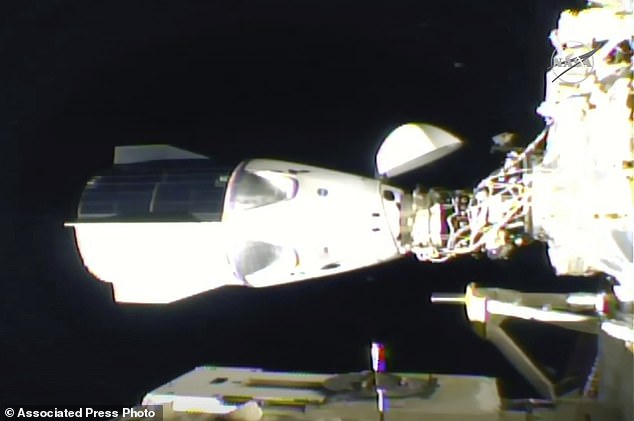 In this frame grab from NASA TV, the SpaceX Dragon is seen after docking at the International Space Station, late Monday 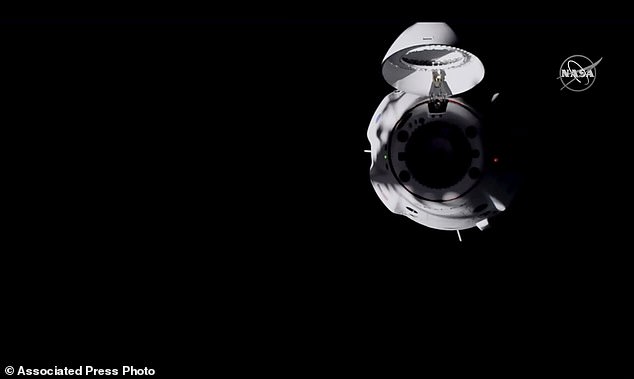 Glover is the first Black astronaut to make an extended stay at the ISS, while Noguchi is the first non-American to fly to orbit on a private spaceship.

The crew joins two Russians and one American aboard the station, and will stay for six months.

SpaceX briefly transmitted live images from inside the capsule showing the astronauts in their seats, something neither the Russians nor the Americans had done before.

US President-elect Joe Biden hailed the launch on Twitter as a ‘testament to the power of science and what we can accomplish by harnessing our innovation, ingenuity, and determination,’ while President Donald Trump called it ‘great.’

The Crew Dragon capsule earlier this week became the first spacecraft to be certified by NASA since the Space Shuttle nearly 40 years ago. Its launch vehicle is a reusable SpaceX Falcon 9 rocket. 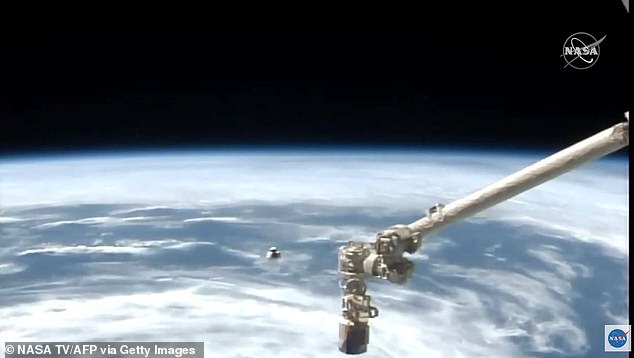 In this split screen image, the capsule can be seen on the left as it approached the ISS, while right the astronauts can be seen piloting their craft 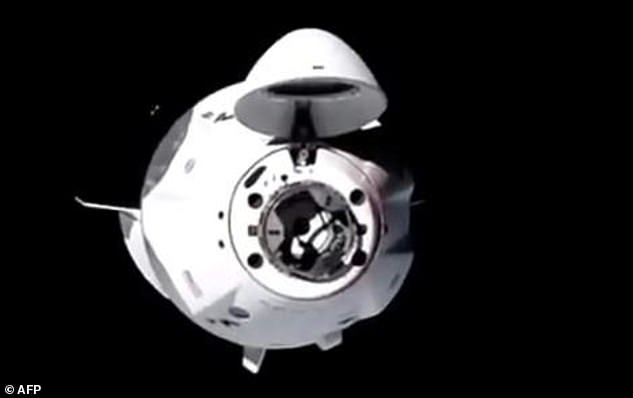 The spacecraft, named ‘Resilience,’ docked autonomously with the space station some 260 miles above Earth 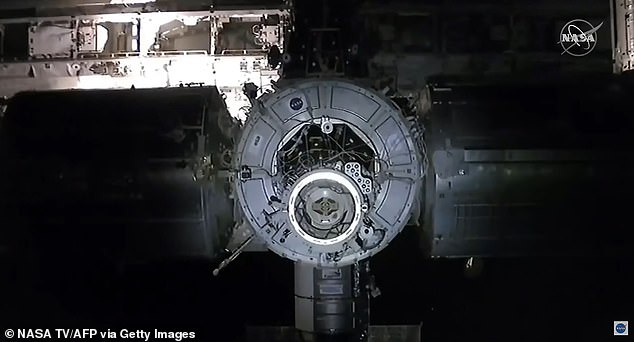 SpaceX´s Crew Dragon capsule, dubbed Resilience by its crew of three Americans and one Japanese astronaut, docked at 11:01pm EST, 27 hours after launching atop a Falcon 9 rocket from Cape Canaveral, Florida

At the end of its missions, the Crew Dragon deploys parachutes and then splashes down in water, just as in the Apollo era.

SpaceX is scheduled to launch two more crewed flights for NASA in 2021, including one in the spring, and four cargo refueling missions over the next 15 months.

NASA turned to SpaceX and Boeing after shuttering the checkered Space Shuttle program in 2011, which failed in its main objectives of making space travel affordable and safe.

The agency will have spent more than $8 billion on the Commercial Crew program by 2024, with the hope that the private sector can take care of NASA’s needs in ‘low Earth orbit’ so it is freed up to focus on return missions to the Moon and then on to Mars.

SpaceX, founded by Elon Musk in 2002, leapfrogged its much older rival Boeing, whose program floundered after a failed test of its uncrewed Starliner last year.

This is the second astronaut mission for SpaceX. But it’s the first time Elon Musk´s company delivered a crew for a full half-year station stay. The two-pilot test flight earlier this year lasted two months. 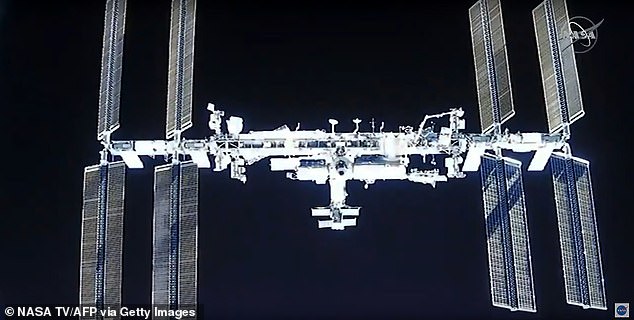 A view of the International Station, an orbital laboratory about 250 miles above Earth 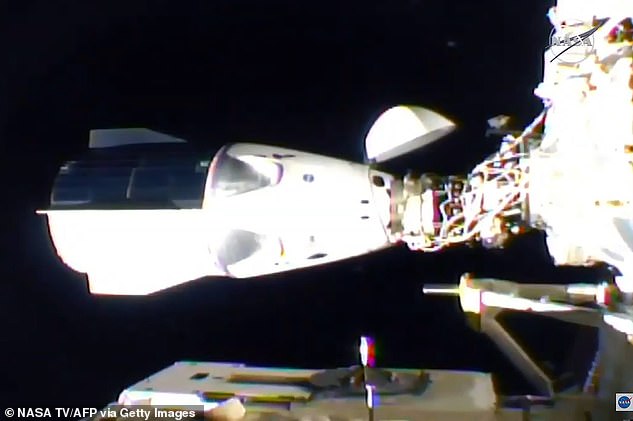 The three Americans and one Japanese astronaut will remain at the orbiting lab until their replacements arrive on another Dragon in April. And so it will go, with SpaceX – and eventually Boeing – transporting astronauts to and from the station for NASA.

This regular taxi service got underway with Sunday night’s launch.

But SpaceX’s success won’t mean the US will stop hitching rides with Russia altogether, said NASA administrator Jim Bridenstine. The goal is to have an ‘exchange of seats’ between American astronauts and Russian cosmonauts.

Bridenstine also explained it was necessary in case either program was down for a period of time.

The reality, however, is that space ties between the US and Russia – one of the few bright spots in their bilateral relations – have frayed in recent years.

Russia has said it will not be a partner in the Artemis program to return to the Moon in 2024, claiming the NASA-led mission is too US-centric. 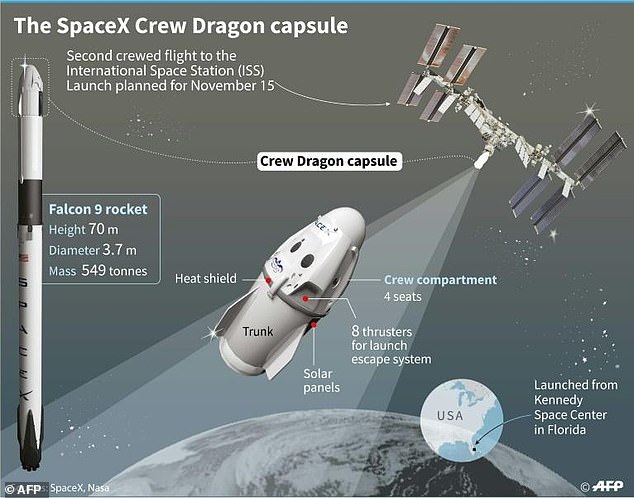 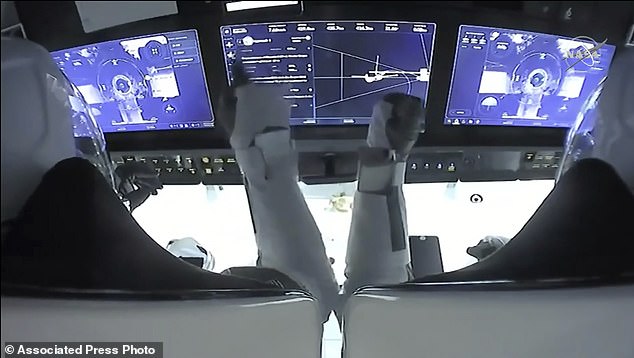 Dmitry Rogozin, the head of Russia’s space agency, has also repeatedly mocked SpaceX’s technology, telling a state news agency he was unimpressed with the Crew Dragon’s ‘rather rough’ water landing and saying his agency was developing a methane rocket that can be reused 100 times.

But the fact that a national space agency feels moved to compare itself to a company arguably validates NASA’s public-private strategy.

The cost of round-trips on Russian rockets had been rising and stood at around $85 million per astronaut, according to estimates last year. 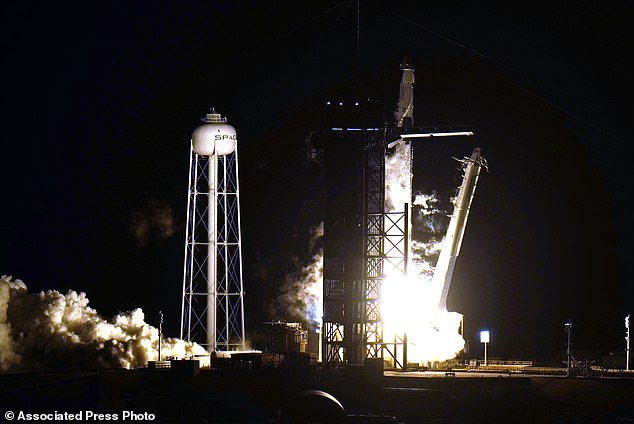 A SpaceX Falcon9 rocket, with the Crew Dragon capsule attached blasts off from Kennedy Space Center’s Launch Complex in Cape Canaveral with the four astronauts who were on their way to the international Space Station 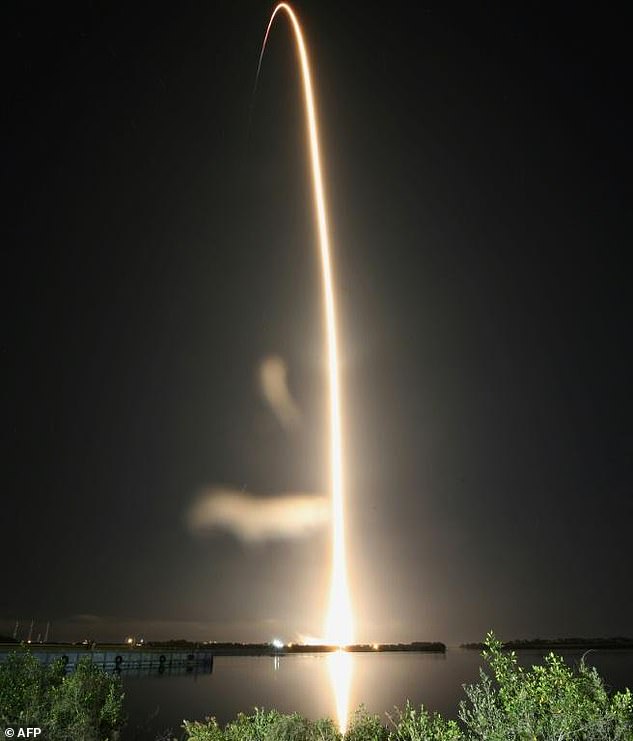 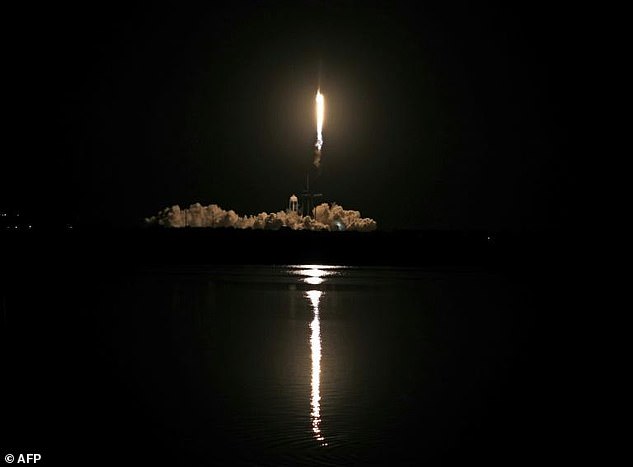 A SpaceX Falcon 9 rocket lifts off from launch complex 39A at the Kennedy Space Center in Florida on November 15, 2020

Presidential transitions are always a difficult time for NASA, and the ascension of Joe Biden in January is expected to be no different.

The agency has yet to receive from Congress the tens of billions of dollars needed to finalize the Artemis program.

Bridenstine has announced that he will step down to let the new president set his own goals for space exploration.

US President-elect Joe Biden hailed the launch on Twitter as a ‘testament to the power of science and what we can accomplish by harnessing our innovation, ingenuity, and determination,’ while President Donald Trump called it ‘great’

So far, Biden has not commented on the 2024 timeline.

For Sunday’s launch, NASA kept guests to a minimum because of coronavirus, and even Musk had to stay away after tweeting that he ‘most likely’ had an infection. 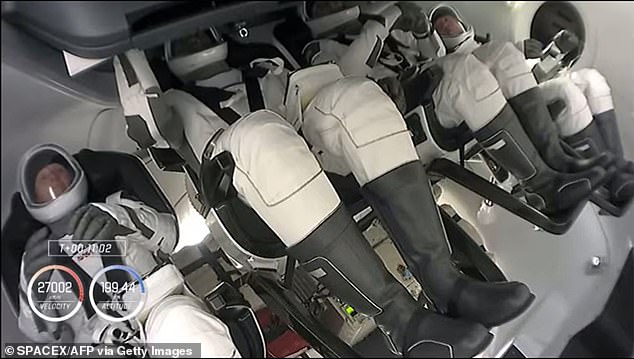 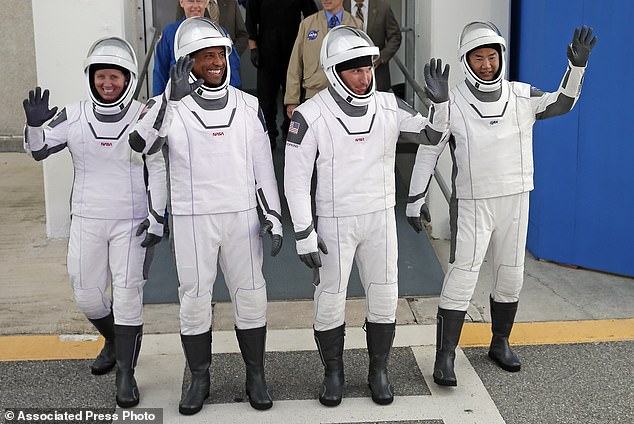 NASA astronauts, from left, Shannon Walker, Victor Glover, and Michael Hopkins and Japan Aerospace Exploration Agency astronaut Soichi Noguchi leave the Operations and Checkout Building on their way to launch pad 39A for the SpaceX Crew-1 mission to the International Space Station at the Kennedy Space Center in Cape Canaveral, Florida on Sunday

He was replaced in his official launch duties by SpaceX President Gwynne Shotwell, who assured reporters he was still very much involved with Sunday night’s action, although remotely.

As they prepared for the space station linkup, the Dragon crew beamed down live window views of New Zealand and a brilliant blue, cloud-streaked Pacific 250 miles below.

‘It looks amazing from up here, too,’ Hopkins replied.