SpaceX’s Falcon Heavy embarked on its ‘most difficult mission yet’ this morning which saw the center core dramatically explode as it crashed into the Atlantic Ocean.

After a three hour delay from its originally scheduled launch time of 11:30pm ET Monday night (04:30 BST Tuesday) but was set back for ‘additional ground system checkouts’ and reset for 2:30am ET (07:30 BST).

An initially textbook launch of the enormous rocket drew gasps and applause from a crowd at the Cape Canaveral, Florida site but 11 minutes in the mission was struck with disaster when the centre core failed to land.

It was intended to touchdown on the drone ship titled ‘Of Course I Still Love you’ in the Atlantic Ocean but went up in flames before crashing into the water.

The two side boosters, being re-used for the second time, had already completed a successful landing at a site in Florida.

Falcon Heavy is the most powerful operational rocket in the world ‘by a factor of two,’ SpaceX says on its website. It has the ability to lift into orbit nearly 64 metric tons (141,000 pounds) – more than a 737 jetliner loaded with passengers, crew, luggage and fuel.

Only the Saturn V moon rocket, last flown in 1973 from the same launch pad, delivered more payload to orbit, it says.

After the boosters separated safely, the craft began its six-hour mission to deploy the 24 satellites on-board, which include a deep space atomic clock, a solar sail, clean and green fuel, and even human ashes.

It mission is expected to provide data to certify the Falcon Heavy – and reused boosters – for future national security launches.

It was set to take off last night at 11:30pm ET Monday night (04:30 BST Tuesday) but was pushed back to 2:30am ET (07:30 BST). After the boosters separated safely, the craft began its six-hour mission to deploy the 24 satellites on-board 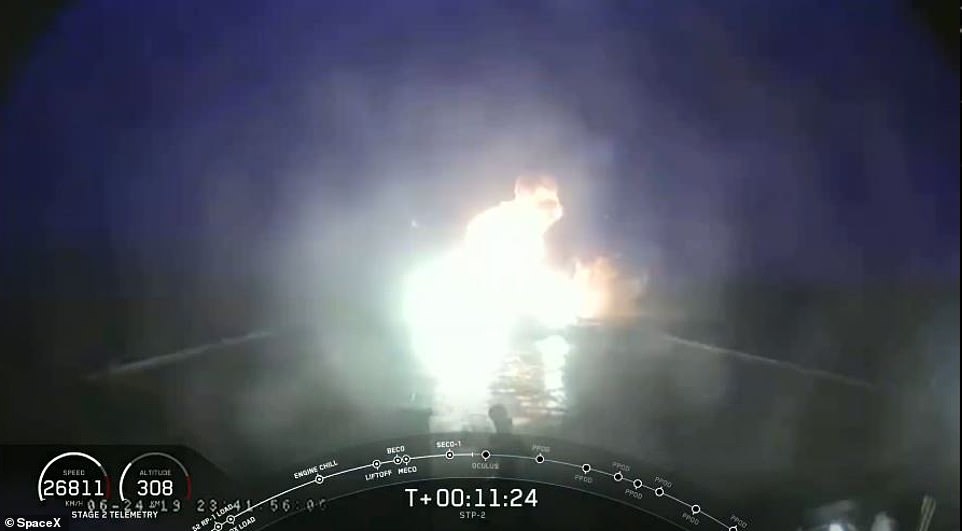 The center core was a new addition to the Falcon Heavy mission and was intended to land on a drone ship 750 miles away from the launch point at Cape Canaveral when it crashed, 11 minutes and 24 seconds after launching 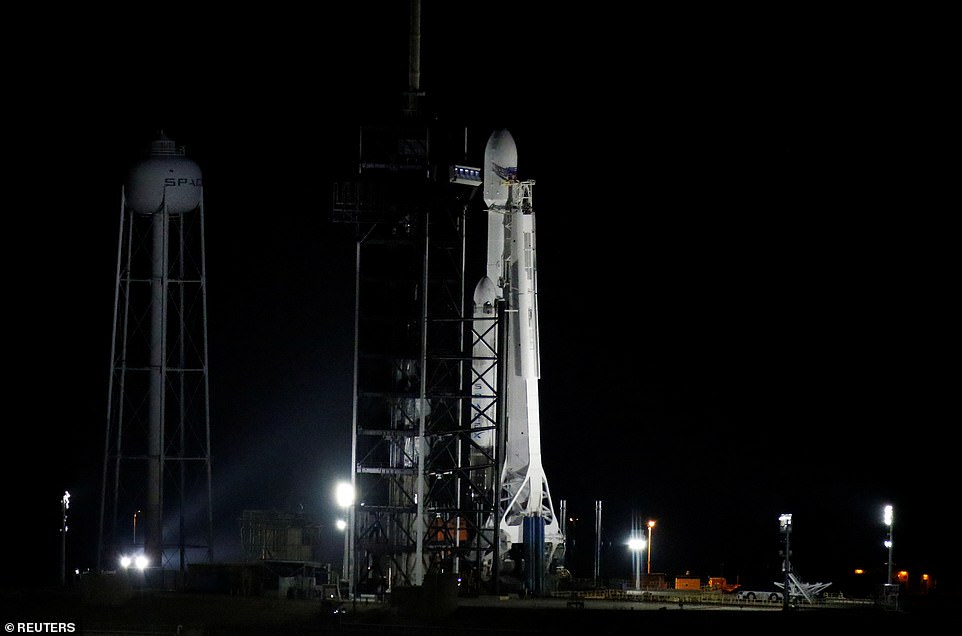 SpaceX’s Falcon Heavy successfully completed the launch of its ‘most difficult mission yet’. It was set to take off last night at 11:30pm ET Monday night (04:30 BST Tuesday) but was pushed back to 2:30am ET (07:30 BST)

A SpaceX launch of Falcon heavy in April saw the center core have more difficulty as it managed to land on its drone ship in the ocean, but the core accidentally fell over on the way back to shore due to choppy seas.

SpaceX still has yet to recover the core of a Falcon Heavy intact after a mission.

The livestream presenter said before it crashed today: ‘The center core entry and landing is going to be risky. During entry it will face more heating and dynamic pressure than we have ever experienced on Falcon 9 or Heavy before.

‘Why you ask? because we have to lift the second stage higher and faster than ever before in order to have enough performance in it to execute four burns into all the different orbits.’

After the failed landing was shown on the live stream, appearing to show an explosion, the co-presenter said: ‘it looks like our center core did not make it on our drone ship, Of Course I Still l Love You tonight.

‘Again, as we’ve been mentioning, this was the most challenging landing we have had to date and this is our secondary mission.’

The remains of 152 people are on board the Elon Musk rocket which cost the families of the deceased more than $5,000 (£3,928) back in 2018 which transports seven grams of their loved one’s ashes on the spacecraft.

The ashes of the deceased have been packed into metal storage capsules and placed on-board one of Falcon Heavy’s payload of satellites ahead of tonight’s launch.

Celestis DNA has been operating its space burial service since 1994 and has helped put human and pet animal remains on 15 different spacecraft.

Each of the metal capsules containing the remains has a sentimental message etched into its side — akin to the inscriptions placed on tombstones.

Among these etchings are phrases including ‘Reach for the stars!’ and ‘Space Truckin’ Forever’, reported Business Insider.

Star Trek actor James Doohan — who passed away in 2005 — had some of his remains sent into space with the help of Celestis DNA back in 2008.

Several famous astronauts and scientists have also had their ashes sent into orbit.

While the unique farewell was once reserved for the wealthy and famous, more affordable pricing in recent years has meant that space lovers from all walks of life can now have their ashes sent into orbit.

Today’s launch has been dubbed the ‘Heritage Flight’, with the remains being placed on board the General Atomics Orbital Test Bed, one of 24 satellites Falcon Heavy is carrying. 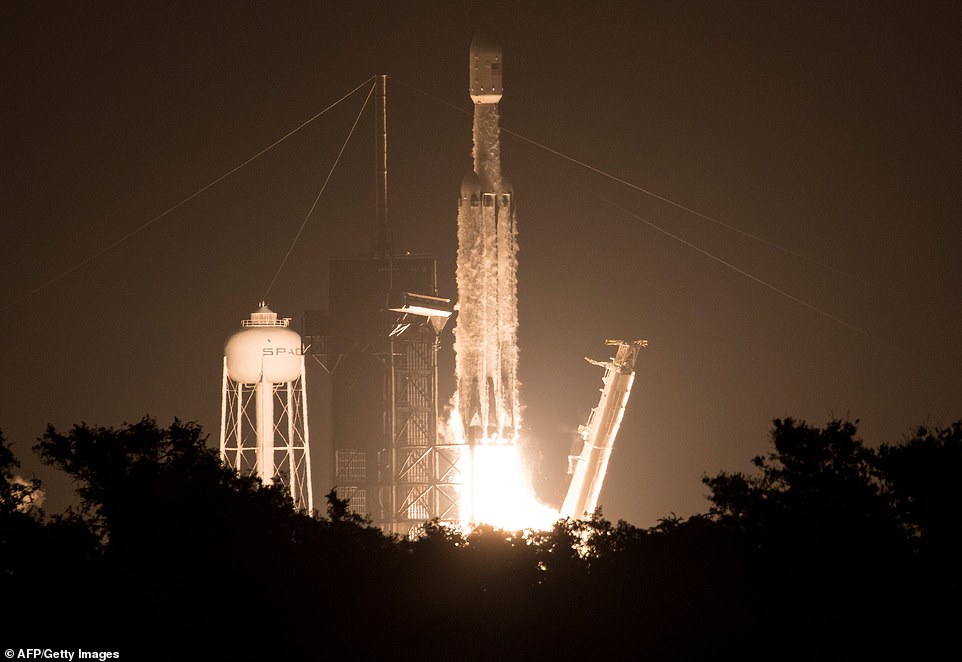 The Falcon Heavy rocket blasted off from Nasa’s Kennedy Space Centre in Florida. It was the third flight of a Falcon Heavy, but the first ordered by the military 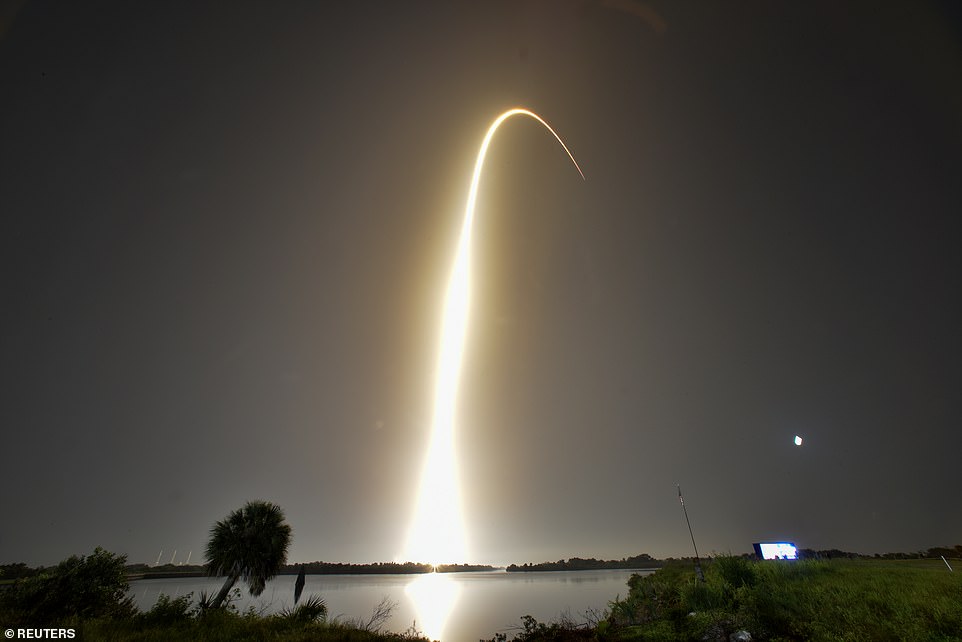 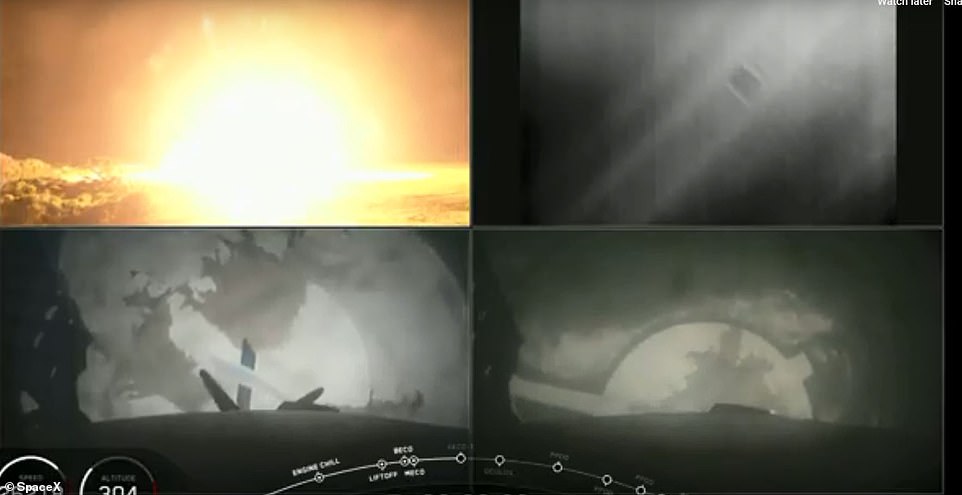 Biographies of over 120 of the departed travellers can be read on the Celestis website.

Tonight’s launch will mark the third time that the partially-reusable SpaceX Falcon Heavy has travelled into orbit and the rocket’s first night-time lift-off.

In February 2018, the rocket sent a Tesla Roadster into orbit around the sun.

The second mission successfully carried the communications satellite Arabsat 6A into orbit back in April 2019.

HOW DOES THE SPACEX FALCON HEAVY MEASURE UP?

When it launches, Falcon Heavy (left) will be the world’s most powerful rocket, capable of carrying payloads far greater than even the Apollo 11 space shuttle (second from left)