Spain sees another rise in coronavirus cases with 5,183 new infections

Spain saw another increase in its daily number of coronavirus cases today after another 5,183 people tested positive for the disease.

Catalonia had separately revealed thousands more deaths after taking a tally from funeral homes, but those have not been included in the nationwide figures.

Spain has been under lockdown since March 14, but wants to expand its testing capacity to more than 20,000 a day with a view to lifting it in certain areas.

Healthcare workers in protective gear treat a patient in the intensive care unit of the Hospital del Mar in Barcelona yesterday. Most of the hospital’s capacity is devoted to virus patients

Of the 5,183 new cases, the Madrid region accounted for 1,168 while Catalonia had another 849, according to health ministry figures.

Those two regions also had 252 of the 551 new deaths between them, with 153 new fatalities in Madrid and 99 in Catalonia.

The Spanish government’s death toll for Catalonia is 3,855, but Catalan health authorities say 7,097 virus deaths have been reported by funeral homes.

According to the Catalan health ministry, that includes 456 people who died of coronavirus at home.

Around 60 per cent of deceased patients in Spain have been aged eighty or over, with nearly 87 per cent aged at least seventy.

Nearly 75,000 people have now recovered from the disease in Spain, including another 3,947 who were added to the tally today.

The vast majority of cases have been confirmed by standard PCR tests, although some infections are listed under the heading of ‘rapid tests’.

Prime minister Pedro Sanchez has promised to expand testing to allow for the lockdown to be eased in certain areas.

‘Spain is already one of the countries making the most daily tests. More than 20,000, and we are increasing the number,’ Sanchez told a near-empty parliament yesterday.

Officials say testing for the virus has to be expanded to include people who have mild or no symptoms, to track the spread in more detail.

The government also said last week it would carry out mass antibody tests on the blood of 60,000 randomly chosen people over three weeks, to begin identifying those who might in theory now be immune after exposure to the virus.

However, health and virology experts are not yet certain about the quality of such tests, or how much immunity such antibodies might provide.

Britain and Germany are among many countries who are keen on antibody tests but have not yet identified a reliable one.

The 5,183 cases today mark a second straight day of increase after 5,092 yesterday and 3,045 on Thursday, which was the lowest figure since March 20.

Some inflation could be ascribed to a backlog from the long Easter weekend, which has also surfaced in other countries’ figures.

The Spanish government is keen to restart whatever businesses it can as soon as possible, especially ahead of what would usually be the tourist season.

The International Monetary Fund has said Spain’s economy is likely to suffer an eight per cent slump this year, partly because of the collapse in tourism. 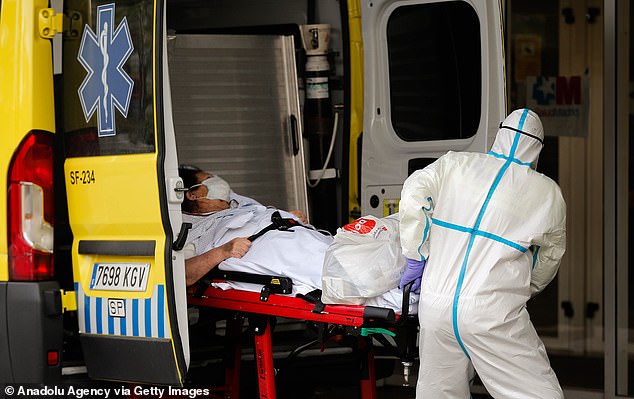 Spain’s debt-to-GDP ratio is projected to hit 113 per cent, its highest level in over a century, with a budget deficit of 9.5 per cent which would be the largest in the eurozone.

The IMF said unemployment, already the highest in the European Union, would jump to nearly 21 per cent from 14 per cent last year.

Some workers have resumed their jobs in sectors including construction and manufacturing after a two-week ‘hibernation’ expired this week.

But with most people still confined to their homes, other businesses such as shops, bars and restaurants will stay closed until at least April 26.

The government said on Wednesday it would begin to hold meetings with opposition leaders on a ‘pact for the social and economic reconstruction of Spain’.

The proposal is inspired by the 1977 ‘Pacts of Moncloa’ which aimed to transform the state-run economy after the end of the Franco dictatorship.