The heir to the Spanish throne has delivered her first public address at the age of 13.

Princess Leonor joined her father King Felipe on stage at an event marking the 40th anniversary of the constitution in Madrid on Wednesday.

After King Felipe read the law’s preamble, he was joined on stage by his eldest daughter who confidently read the first of the 169 articles of Spain’s Carta Magna.

Public debut: Princess Leonor of Spain, 13, who is heir to the Spanish throne, was watched by proud father King Felipe, 50, as she delivered her first public speech at an event marking the 40th anniversary of the constitution in Madrid on Wednesday 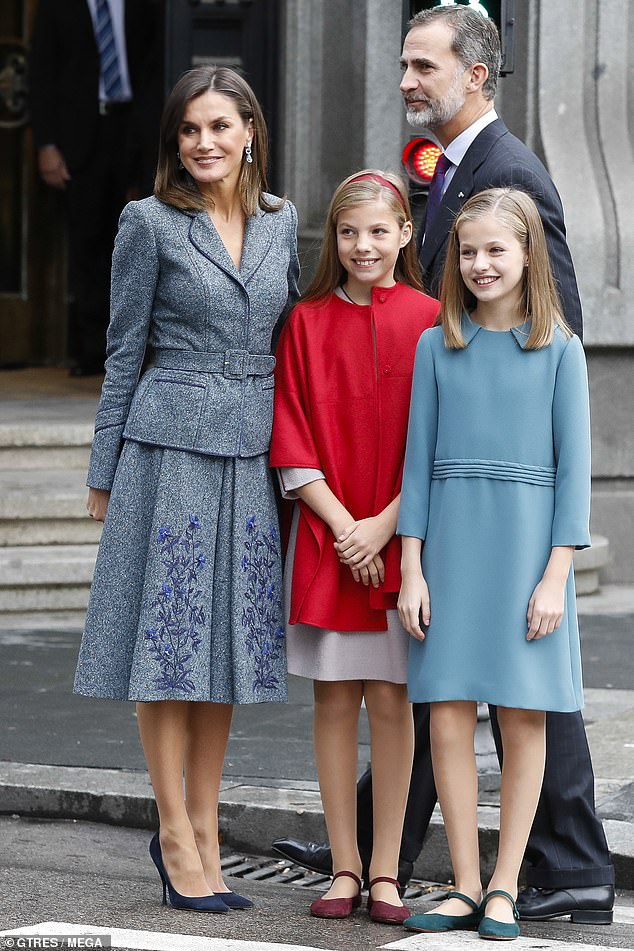 Biggest fans: Princess Leonor, right, was also supported by her mother Queen Letizia, 46, and her younger sister Princess Sofia, 11, left, for her speech at the Cervantes Institute

Princess Leonor, who is at school in Madrid, was supported by her mother Queen Letizia, 46, and her younger sister Princess Sofia, 11, for her speech at the city’s Cervantes Institute.

Princess Leonor wore a blue dress with a Peter Pan collar and teal suede Mary Janes. Her sister Sofia wore a pale pink dress under a red coat and a pair of matching Mary Janes but in red. 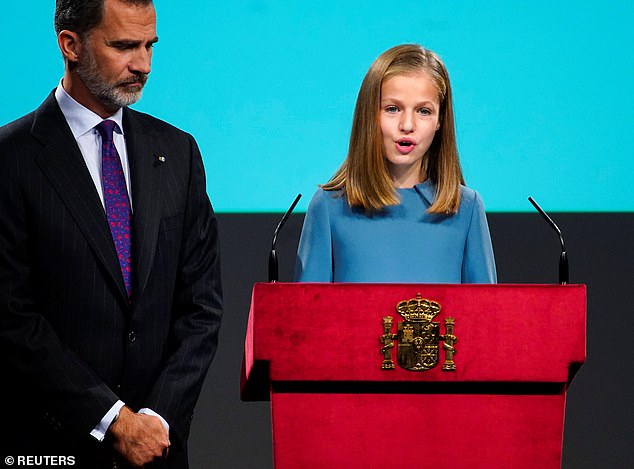 Confident: The teenage princess appeared perfectly composed as she stood behind the lectern to read the first of the 169 articles of Spain’s Carta Magna 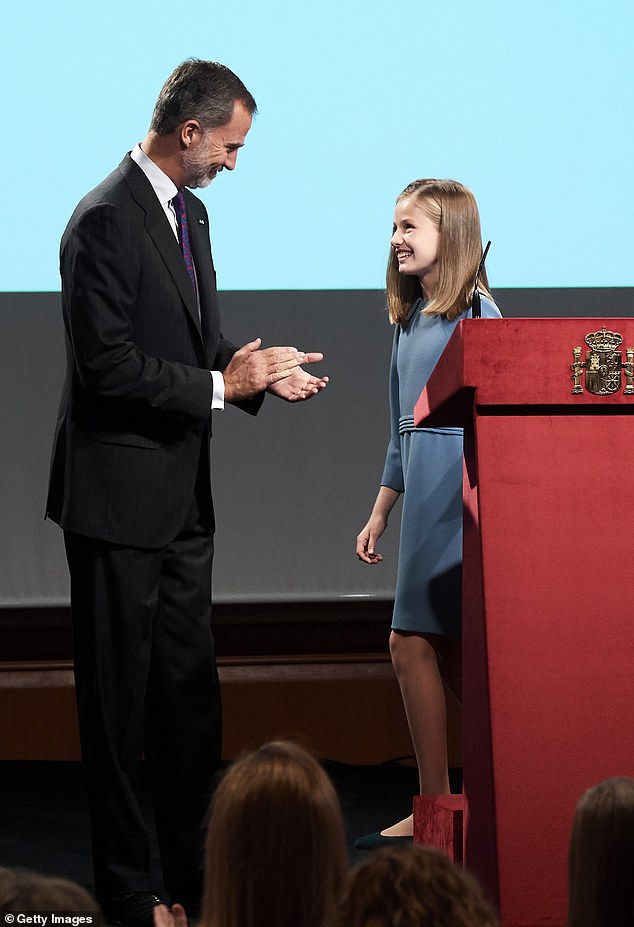 Proud father: King Felipe applauded his daughter as she finished speaking at the event. The Spanish king was also 13 when he spoke publicly for the first time in 1981 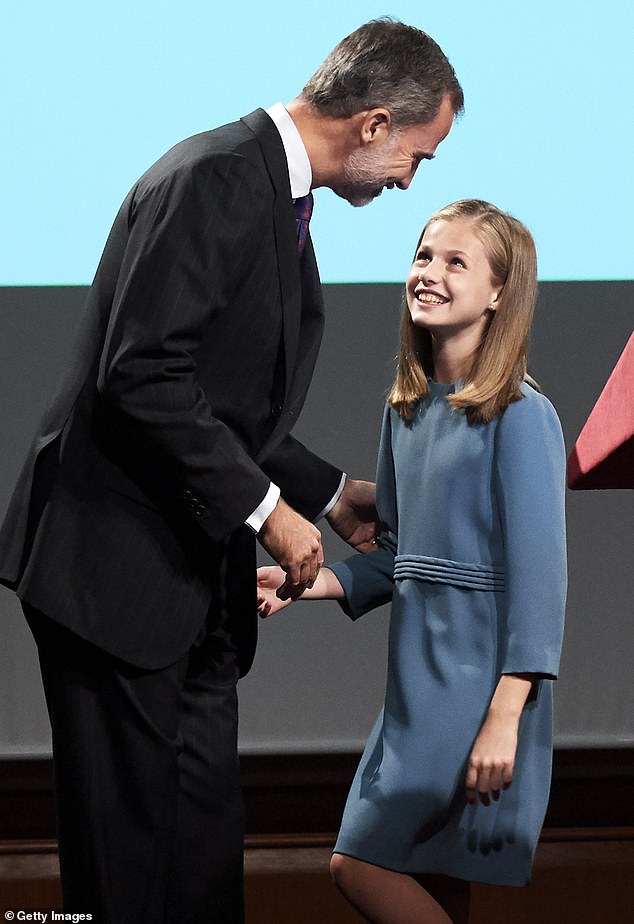 Delighted: King Felipe beamed down at his daughter as he looked up at him for his approval 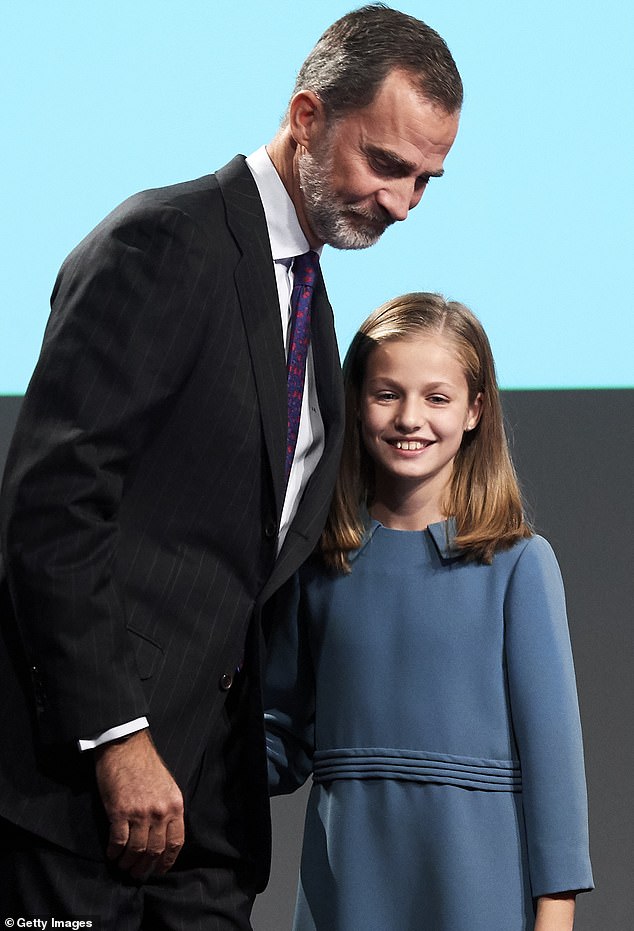 Touching moment: The father-of-two pulled his eldest daughter in for a brief embrace on stage

King Felipe looked dapper in a pin striped suit and added a splash of colour with a vibrant purple and pink patterned tie.

The teenage princess appeared perfectly composed as she stood behind the lectern to read the article, which states that Spain follows the political system of a parliamentary monarchy. Those present said she spoke in a ‘firm voice’.

Her proud father stood just feet away and pulled his daughter into a hug once she finished. 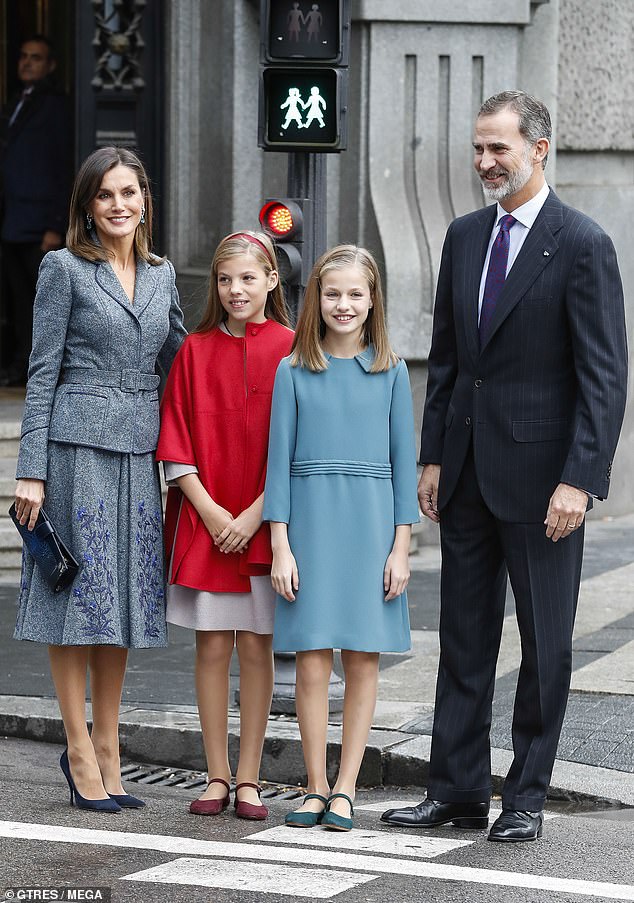 Family photo: After the event, King Felipe and Queen Letizia posed with daughters Princess Leonor, right, and Princess Sofia, left. The young royals are currently at school in Madrid

The constitution was approved by the Spanish Parliament on 31 October 1978.

The young princesses have made a number of recent public appearances with their parents, most recently at Spain’s National Day celebrations this month.

The day commemorates when Christopher Columbus first set foot in the Americas in 1492.

The Palace revealed over the summer that the couple’s Leonor and Sofia had travelled to America during the holiday to join an educational camp in a bid to give them ‘new knowledge and experiences’.