Sensors are being installed on beaches in Spain to enforce coronavirus social distancing by warning tourists when the sunny spots are becoming overcrowded.

A beach in the popular tourist city of Fuengirola on the Costa Del Sol is reportedly the first in Spain to have the artificial intelligence system installed.

Scanners fitted to lamp posts will monitor the numbers of people on the beach and then inform tourists via a smartphone app which areas are busiest.

It comes as a regional leader in the country promised that the islands of Ibiza and Majorca, which are thronged with tourists every summer, are ‘safe’ for visitors.

Francina Armengol, the president of the Balearics Islands – which also include Minorca and Formentara – said the destinations were looking forward to welcoming back international holidaymakers as well as Spaniards.

Sensors are being installed on beaches in Spain to enforce coronavirus social distancing by warning tourists when the sunny spots are becoming overcrowded. Pictured: A beach in Fuengirola on the Costa Del Sol is reportedly the first in Spain to have the system installed

According to the latest figures from the Johns Hopkins University, Spain has registered 228,691 cases of COVID-19 and 27,104 deaths.

The sensors in Fuengirola, designed by a Spanish firm Juma, are being installed on several lamp posts running along the beach.

A programme divides the beach into virtual squares between the sensors which measure the numbers of people entering and leaving the beach at all times.

The sensors will work alongside a free mobile phone application which can tell users how packed each area of the beach is in real time.

Carlos Moreno, the director of the company which created the system, said between 40 and 50 sensors would be needed for the four miles (seven kilometres) of beaches in the city. 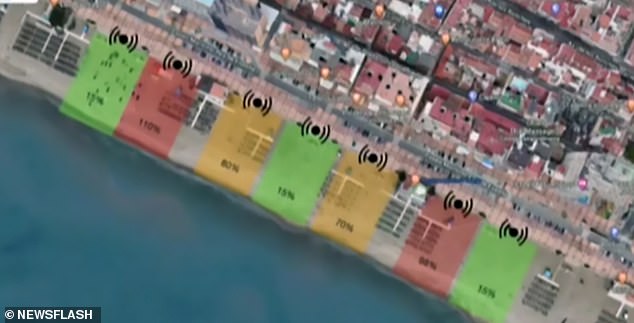 The AI system could also be used in other areas where people gather, such as shopping centres or event venues.

Ana Mula, the mayor of Fuengirola, said that with the easing of lockdown restrictions people will begin to gather in certain areas but ‘we should guarantee safe conditions for everybody.’

She said the system will be used as soon as the authorities open the beach back up to the public, which is expected to happen on June 8 as part of a further easing in the country’s easing of restrictions.

And Balearics president Ms Armengol, a trained pharmaceutical chemist, said the region is ‘preparing to open’.

She made her comments after the EU tried to boost foreign holiday prospects this summer by urging a return to unrestricted free movement.

Mrs Armengol described the EU push as ‘positive’ and said: ‘The Balearic Islands are preparing to open not only to all Spanish residents but also international tourists as soon as they are allowed in.

‘We are a safe destination.’

She also said airports should be allowed to do ‘pilot runs’ in June in anticipation of the peak season summer months when Spain is expected to welcome back foreign tourists after it ends a quarantine scheme due to begin on Friday.

The Spanish government announced on Tuesday people entering the country from May 15 would have to self-isolate for a fortnight and would only be allowed to leave their specified quarantine address with face masks on for essential trips including food shopping.

Lorry drivers and health professionals are among the few groups exempted.

It is linked to the Spanish state of emergency which could continue until the end of June but is expected to be lifted by the start of July if the health situation continues to improve.