Expat parents have joined opposition politicians in attacking the Spanish government for its ‘joke’ solution to the six-week coronavirus confinement of children.

Government spokeswoman Maria Jesus Montero confirmed at lunchtime today that youngsters under 14 will be allowed outdoors from next Monday, April 27 after what will be six weeks of lockdown.

But she left parents angry and bewildered after their hopes of a quick stroll near their homes with their cooped up kids were snubbed out by her insistence children would only be allowed to do things permitted under Spain’s state of emergency like accompanying parents to the supermarket, chemist’s or a bank.

Those between the ages of 15 and 17 already were allowed. There will be no time limit, and the children won’t be required to wear masks. Children must be accompanied by an adult they live with.

Barcelona mayor Ada Colau, a mother of two young children who led the ‘Free Our Children’ campaign, called on the government to backtrack before next Monday, saying: ‘Boys and girls should be able to get out to breathe fresh air, not to consume in closed spaces.

Expat education worker Nina Cashin pictured with her two children Nathan, 9, and Sienna, 7. She said ‘A supermarket is definitely not the place I’d take my children’

‘They have to be let outdoors, with sensible precautions, without going to the park or touching anything.

‘That’s why a quick walk near home would be better than going to the supermarket or a bank.’

Teresa Rodriguez, president of parliamentary group Adelante Andalucia, added: ‘A walk round the block. Two streets. We’re not asking for more. I say this as a mother. Supermarkets are not the sort of place we should be taking a child. They need light and air.’

Expat education worker Nina Cashin, whose two children Nathan and Sienna are aged nine and seven, said: ‘A supermarket is definitely not the place I’d take my children.

‘They’re risk areas for catching coronavirus. And children are always touching everything which could mean that if they were asymptomatic carriers, they could give it to someone else.

‘Listening to the news on this today sounds like it’s April Fools’ Day. 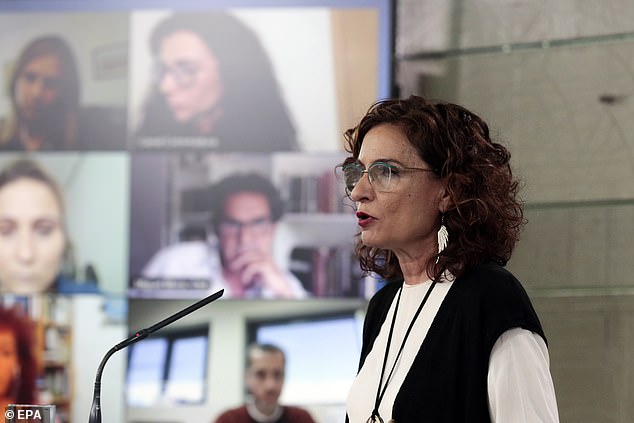 The 39-year-old, originally from Newcastle but now living and working in Marbella, added: ‘I’d ideally like to get my children out into the countryside so they could get some real fresh air but even a walk near our home would be great.

‘They’ve been indoors for five weeks now and they’ve both had meltdowns. They miss doing physical activity and seeing their friends. Seeing them through a computer screen is not the same.’

Sharon Morris, originally from Birmingham but now living on the Costa del Sol, said: ‘It’s absolute madness. This is going to put more people at risk, not less.’

Cadiz-based ecologist Maria Panow tweeted: ‘It’s absolutely ridiculous how the Spanish government is handing the situation for families with children.

Paediatrician Azucena Criado said of the modification to Spain’s state of emergency rules regarding the under-14s: ‘It seems to me to be the worst of the options. It doesn’t favour the wellbeing of children or their families.

‘They’re not promoting physical activity which is what they need.’