Nancy Pelosi said Monday that she isn’t concerned with losing her speakership reelection on Sunday, claiming she has it ‘wrapped up’ despite several Democrats demanding that the party needs new leadership.

‘You have a big vote Sunday night for speaker. You think have got that wrapped up?’ a reporter on Capitol Hill Monday asked the House Speaker of the January 3 election.

‘You have some thin margins this time around,’ the reporter pointed out.

‘That’s fine,’ she said, adding she isn’t concerned about the coronavirus pandemic impacting her chances at reelection for House leader of her party.

In a virtual breakfast with her colleagues earlier this month, Pelosi warned that writing any other name down for House Speaker would ‘count [as a vote] for the GOP.’

‘We need people to vote with the nominee. That would be me,’ she urged.

House Speaker Nancy Pelosi said Monday she isn’t concerned about losing her leadership position in the caucus election January 3, claiming she has the reelection ‘wrapped up’ 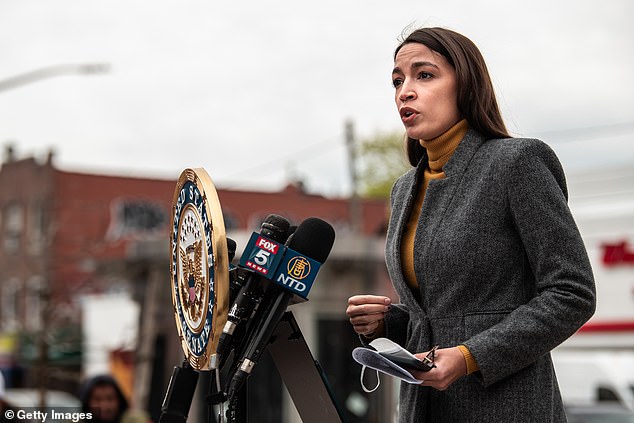 Several junior, more progressive Democratic lawmakers, including Representative Alexandria Ocasio-Cortez, are demanding new leadership within the party. Election for speaker will be held on Sunday

Representatives-elects Cori Bush and Jamaal Bowman, who have both been embraced by the ‘squad’, wouldn’t say Sunday whether they will vote for Pelosi’s reelection after they are sworn in for the start of the 117th Congress.

The other members of the progressive group of junior lawmakers include Representatives Ilhan Omar of Minnesota, Rashida Tlaib of Michigan and Ayanna Pressley of Massachusetts.

The New York Representative Ocasio-Cortez, the unofficial leader of the ‘squad’ and a self-proclaimed Democrtic socialist, suggested earlier this month she would not support Pelosi if she ran again. She claimed it’s time for new, more progressive leadership for the Democratic Party.

The 31-year-old, however, admitted that even if Pelosi, 80, and Senate Minority Leader Chuck Schumer, 70, were to go, the progressive wing of the party has no plan on who would fill those vacancies.

She said she can’t be the one to take on a bigger role quite yet.

Ocasio-Cortez said the replacement for Democratic leadership could end up being worse and ‘even more conservative’ than Pelosi and Schumer – who are both far from conservative.

‘How do we fill that vacuum? Because if you create that vacuum, there are so many nefarious forces at play to fill that vacuum with something even worse,’ Ocasio-Cortez told The Intercept podcast ‘Intercepted’ on December 16.

‘And so, the actual sad state of affairs is that there are folks more conservative than even they are willing to kind of fill that void,’ she said.

‘The House is extraordinarily complex and I’m not ready,’ Ocasio-Cortez said when it was suggested she could take a leadership position in two years. ‘It can’t be me. I know that I couldn’t do that job.’

‘What I’m going to do is make sure that the voices of the people of Saint Louis are heard and that we have what we need. And so you will find out then,’ Bush told CNN when asked Sunday morning if she would vote for Pelosi’s reelection.

‘That’s not a yes,’ Dana Bash, who filled in for ‘State of the Union’ host Jake Tapper this weekend, said.

‘I’m working with my community,’ Bush responded – still not answering the question.

Bowman was just as noncommittal about which way he will vote once it comes time for Democratic caucus leadership elections.

‘So, you will find out when my vote is tallied,’ Bowman said. ‘And, again, organizing with our community to figure out what’s best.’ 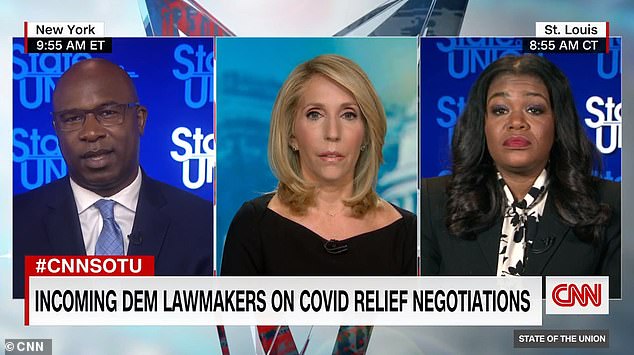 Representatives-elect Cori Bush (right) and Jamaal Bowman (left), who have both been embraced by the ‘squad’ ahead of taking office, refused to say if they would vote for Pelosi’s reelection

Pelosi easily won her last reelection for her long-held leadership position – running unopposed for the speakership.

Bowman and Bush both said during their interview Sunday that Donald Trump needs to sign the latest bipartisan coronavirus relief legislation, which was overwhelmingly passed by Congress on Tuesday and passed off to the president for his signature.

‘The American people need relief right now,’ Bowman said when Bash asked him if it was OK for Pelosi to accept a deal that included $600 checks for Americans.

Trump suggested he would veto the legislation if payments were not tripled to $2,000 checks.

Democrats were quick to jump on board with claiming they could pass a separate bill increasing payments, but are pushing for the president to sign the sweeping legislation currently sitting on his desk to deliver relief immediately and avoid a government shutdown.

‘So, this bill was what we were able to come up with at this moment,’ Bowman said. ‘But we need to go right back to the table to give people more in terms of relief.’

‘The president is the embodiment of everything that’s wrong with this country,’ the incoming lawmaker said. ‘He’s a privileged person who rose to power as a reality TV star. And now he’s trying to drive this country into chaos. I can’t wait for him to be out of office’

Pelosi, along with the rest of congressional leadership, vowed not to leave Capitol Hill for holiday recess until a deal was reached on the $900 billion COVID-19 relief package.

They spent the days leading up to the holiday staying in Washington D.C. to negotiate after nine months of deadlock.