Spearfisher, 18, films the moment a bull shark attacks him while diving in murky water

‘Two minutes of terror’: Spearfisher, 18, films the moment a bull shark nearly bites his foot off while he dives in murky water

A spearfisher has recorded a shocking two-minute shark attack that almost resulted in him having his foot bitten off.

Lachlan Pye, 18, was diving off the coast of Lucinda in Far North Queensland when the three-and-a-half-metre shark charged at him from below.

He told Daily Mail Australia: ‘This bull shark just rushed me out of nowhere and snapped my fish in half.’

Lachlan Pye (pictured), 18, was diving and spearfishing off Far North Queensland when he captured the terrifying moment he was attacked by a bull shark

Pictured: The bull shark bit down on Mr Pye’s flipper and retreated after he kicked it

Mr Pye said: ‘It started as a normal dive, I went down, my mate shot a fish and it came off.

‘As I went down I put a second shot in the fish and the shark came up from underneath and started chomping at my flipper.’

Footage captured on a Go-Pro showed that Mr Pye had speared a fish down low in the murky water.

The diver then turned his head, noticed the bull shark swimming towards him, began to shout and frantically kicked his flippers.

The bull shark bit down on Mr Pye’s right flipper and only swam away after the spearfisher kicked at its head. 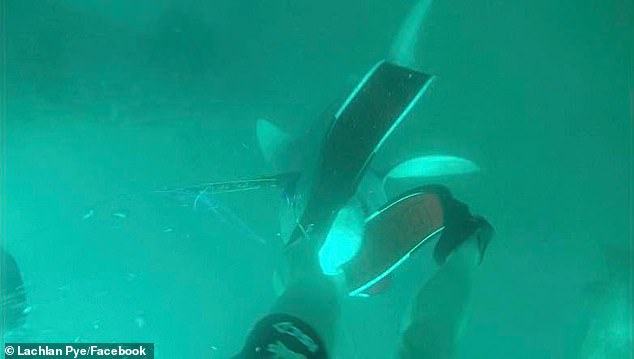 ‘I was kicking it for a bit, then when I got to the top I called for the boat and got straight in,’ Mr Pye explained.

The 18-year-old lost his flipper but was otherwise uninjured.

Mr Pye said he would continue to dive and spearfish despite the close encounter.

In Australia the Bull Shark can be found all the way from the south coast of Western Australia, around the northern coastline and down to the central coast of New South Wales

It eats other animals like fishes, sharks, dolphins, turtles, birds and has been known to feed on land mammals including cattle, people and dogs