Babies are waiting up to two years for a simple procedure to relieve tongue-tie – a common problem that can cause speech impediments and makes breastfeeding painful for mothers.

One in ten infants are born with a tongue-tie, where the membrane that connects the tongue to the mouth is too short for it to move properly.

It is one of the leading causes of potentially dangerous weight loss in newborns, as the restricted tongue stops them forming a vacuum around their mother’s nipple to effectively suck out milk.

Babies are waiting up to two years for a simple procedure to relieve tongue-tie – a common problem that can cause speech impediments and makes breastfeeding painful for mothers. Pictured: Charlotte Bordewey, with son William, endured a two-year wait for treatment

Many develop blocked milk ducts or infections such as mastitis, an inflammation of the breast tissue.

Experts say a simple snip of a fold of skin beneath the tongue, called the frenulum, can easily treat the problem, which experts say should be done a few days after diagnosis.

Newborns have few nerve endings under the tongue, which means no anaesthetic is needed and the quick procedure can be performed by a specialist at an outpatient clinic.

But midwives speaking to The Mail on Sunday have warned that the NHS’s Covid backlog means many babies have had to wait until they are older for treatment, when a general anaesthetic is necessary and the operation becomes more complex.

‘For a baby with tongue-tie, feeding is a bit like trying to suck a really thick milkshake through a really thin straw,’ explains Eilis Mackie, infant feeding lead midwife with HCA Healthcare.

‘They are using a lot of energy to get that milk out and not getting enough.

‘Tongue-ties can really wreak havoc so it’s important we are identifying and treating any that cause problems.’

She warns that while most post-natal health services are back up and running, mothers are still facing long waits for treatment for their babies.

‘There’s at least a 12-week waiting list in some parts of the country for tongue-tie treatment on the NHS.

‘Often, by the time mums get to six or eight weeks of a stressful breastfeeding journey, they feel they can’t do it any more.’

Experts warn that leaving treatment too late could also increase the risk of long-term damage to the child’s development.

‘If a tongue-tie is not resolved, the tongue sits low and flat, which affects the development of the roof of the mouth,’ explains consultant speech and language therapist Joanne Jones. 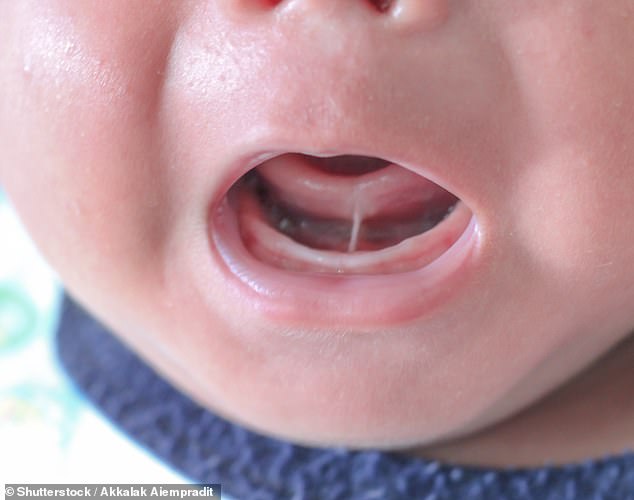 One in ten infants are born with a tongue-tie, where the membrane that connects the tongue to the mouth is too short for it to move properly (stock photo)

‘A low tongue that does not develop a full range of movement can also delay talking and cause difficulties with sound production, including speech.’

Other studies have suggested links to chewing, swallowing and breathing – although experts say more research is needed to confirm this.

One boy who developed speech problems as a result of delayed tongue-tie treatment is William Bordewey, who was born in April 2020.

His severe problem was spotted by midwives at birth, but all treatment services were shut at the time. And with no face-to-face postnatal checks, he fell between the cracks.

Despite the pain it caused Charlotte, his mother, William was able to breastfeed. But as he reached one year old, she noticed he wasn’t forming sounds correctly and was struggling to chew his food.

It wasn’t until last month, almost two years after tongue-tie was diagnosed, that the procedure to treat it was performed.

Owing to the delay, he needed to have the procedure under a general anaesthetic at a specialist children’s hospital that was a two-hour journey from his Herefordshire home.

‘I am frustrated because this is something that we just didn’t need to go through if he had been treated after birth,’ says Charlotte, 32, who manages children’s gift business Melon & Co.

‘The GP who finally referred us said it should never have been allowed to get this far.’

Another mother, 27-year-old Sarah Holland from Kent, has been left with painful sores and nipple scarring after her son Oliver’s tongue-tie operation was delayed for nearly three months.

‘The pain was absolutely excruciating,’ says the primary school teacher, who gave birth in September. ‘I had an emergency C-section but the pain of breastfeeding was a million times worse than the recovery from surgery. It was toe-curling and drove me to tears.

‘A few weeks may not sound long to wait – especially compared with other waiting times on the NHS – but every day feels like a lifetime when you’re struggling to feed your baby.’

Procedures to resolve tongue-tie, medically known as tongue-tie division, are far from a new phenomenon.

Historical records suggest midwives from the Middle Ages to the early 20th Century left one fingernail long so they could use it to quickly slice the skin and free a baby’s tongue soon after birth. But awareness of the condition declined after the introduction of formula milk in the 1940s.

Amy Brown, professor of child public health at Swansea University and author of the book Covid Babies, says a lack of breastfeeding support since the start of the pandemic hasn’t helped.

Her research found eight out of ten new mothers who stopped breastfeeding during lockdown blamed a lack of face- to-face support.

Tongue-tie is sometimes diagnosed at birth, but it can often be picked up in home visits from midwives or health visitors in the days or weeks afterwards.

However, in December a Mail on Sunday investigation revealed that in some areas, just six per cent of new mothers received a face-to-face six-week check with a GP between April 2020 and April 2021.

About one in three health visitor appointments in England in this period were replaced with video or telephone calls.

And according to a recent report published by a coalition of children’s charities, about a third of health visitor drop-in and baby weighing clinics were still shut in November 2021.

Experts say this has led to a two-pronged problem.

While many cases of tongue-tie are being missed, other breastfeeding problems are being mistaken for severe tongue-ties – increasing the demand on services.

In many cases, tongue-ties do not cause a problem for breastfeeding, and no treatment is necessary, but experts say that a lack of face-to-face care means some health visitors may assume a tongue-tie if there are other breastfeeding issues.

‘Tongue-tie division is sometimes offered to women as a solution to breastfeeding problems when it may not be necessary,’ adds Prof Brown.

Bruce Okoye, consultant neonatal and paediatric surgeon at The Portland Hospital in London, agrees, saying: ‘It is really important that women get the support of a breastfeeding specialist if they have problems.

‘Sometimes the cause of the difficulty with breastfeeding is not due to the tongue-tie, but the focus can be drawn to this rather than the technique or other factors.’

But where tongue-tie is the case, Dr Okoye has no doubt that treatment should be performed as soon as possible.