Speeding bikers hit up to 200mph, pull wheelies and weave dangerously through traffic in their own shocking helmet cam footage – as two are jailed for dangerous driving

Three motorcyclists were caught on camera hitting speeds of nearly 200mph on a dual carriageway before weaving in and out of traffic and pulling wheelies.

The GoPro footage was recorded earlier this year by one of the biker’s own helmet cameras as the group drove along the A21 in Hastings, East Sussex.

In the video, Thomas Ettridge, who is riding a green motorcycle, races down the dual carriageway at speeds of 180mph – more than double the 70mph limit.

One of his fellow motorcyclists, Thomas Hayden, then shoots past on a later stretch of road performing a wheelie at around 70mph in a 30mph zone.

He continues the stunt for a further 170 metres before the pair weave in and out of the traffic up ahead.

In the next part of his journey Ettridge darts out to overtake a HGV lorry apparently undeterred by the double white lines.

He eventually catches up again with the rest of his fellow bikers as they form a queue through the traffic.

They all then undertake a white car as they approach a zebra crossing despite pedestrians walking nearby.

The group then overtake on a set of double white lines once again and the video ends shortly after.

The GoPro footage was recorded earlier this year by one of the motorcyclist’s own helmet cameras as he drove along the A21 in Hastings, East Sussex. One of the riders shoots past doing a wheelie for 170 metres before the pair then weave in and out of the traffic up ahead

Police received a number of reports of dangerous driving on April 20, the day the footage was filmed, and authorities later seized Ettridge’s GoPro to be used as evidence.

They each admitted that the manner of their riding fell far below the standard of a careful and competent motorist during police interviews and showed remorse for their actions.

They each pleaded guilty at Hove Crown Court, East Sussex, on November 20.

A judge branded their actions ‘colossally stupid and massively selfish’ and and said it was ‘nothing more than good fortune that you were not killed or injured’.

But he added that while their riding was ‘appalling’ the defendants were ‘all thoroughly decent young men’.

Thomas Ettridge was jailed for 10 months and disqualified from driving for 29 months from the date of his release.

Thomas Hayden, 26, was sentenced to six months’ imprisonment and disqualified from driving for 27 months from the date of release.

Matthew McLaven, 28, was handed a four-month sentence which was suspended for 18 months.

He has been disqualified from driving for two years and must also carry out 150 hours of unpaid work. 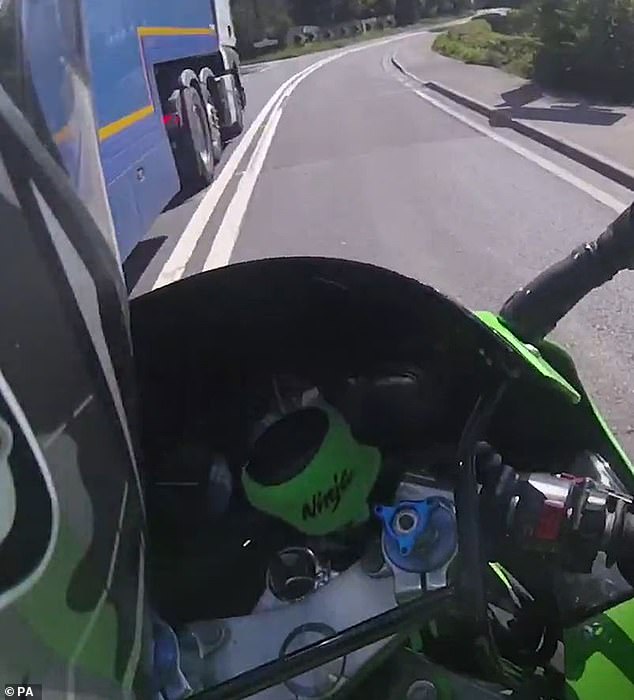 They must all take an extended re-test if they want to get back on the roads after their bans.

Sussex Police released the footage to raise awareness of the dangers of speeding.

Police Constable Chris Welsh, who investigated the case, said: ‘This has been a shocking investigation into some of the fastest and most dangerous motorcycling I have ever come across.

‘The speeds and general aggressive manner of the riding identified are simply ridiculous and leave no room for error should the slightest of issues have occurred.

‘Not only are the riders risking their own lives, but also those of the other road users around them throughout these journeys.

‘This sentencing should act as a stark reminder of the consequences of such behaviour on the roads in Sussex.

‘We will not tolerate dangerous driving by any motorist on our roads, and anyone caught committing such offences will be investigated and dealt with robustly.’