Sperm banks are trying to make donating seem masculine in a bid to draw men in, according to scientists.

In the UK and Australia clinics aren’t allowed to pay men to donate sperm so may be trying to entice donors by depicting them as selfless or heroic.

Military-style recruitment posters, phrases like ‘good men’ and ‘life changing’, and comparisons with traditionally male jobs like firefighting have been used.

Researchers have suggested the clinics’ techniques are sexist and said they were ‘surprised’ they operated by calling potential donors’ masculinity into question.

This National Sperm Bank advert from 2015 shows Lord Kitchener, formerly used as an army recruitment advert, beside sperm, associating sperm donation with the once noble and patriotic idea of joining the army 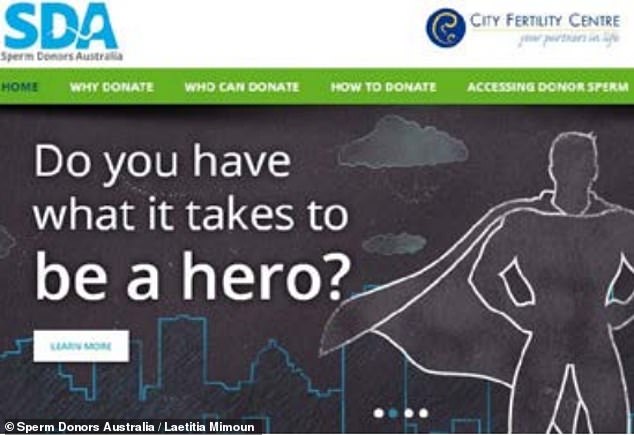 Sperm Donors Australia, in this advert from 2017, directly challenges men asking whether they are heroic enough to donate sperm

Research by City, University of London, and Cardiff University studied advertising campaigns by fertility clinics in the UK and Australia.

Sperm banks in both countries are unable to pay men for their sperm, unlike in the US, where one company, for example, offers up to $900 (£707) for a donation.

And in 2005 British and Australian donors lost the right to donate their sperm anonymously to avoid the child or mother ever finding out who they are.

So men must now be willing to become the biological father of a child for free and accept that the child may contact them when it turns 18.

For what may seem less appealing than being able to donate anonymously and walk away with hundreds of pounds, clinics must come up with new incentives.

And they do this, City University’s Dr Laetitia Mimoun said, by using ideas of masculinity to create value for something they can’t buy with money.

‘This is to say that if you give your sperm you are a real man and you are better than all the other men who cannot do so for whatever reason,’ Dr Mimoun said. 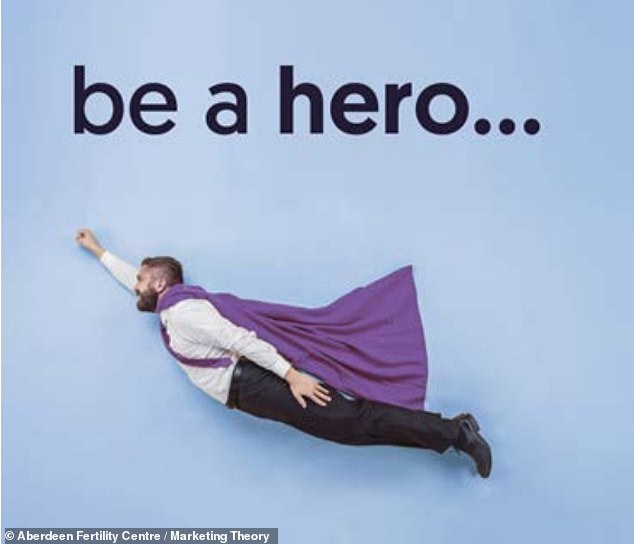 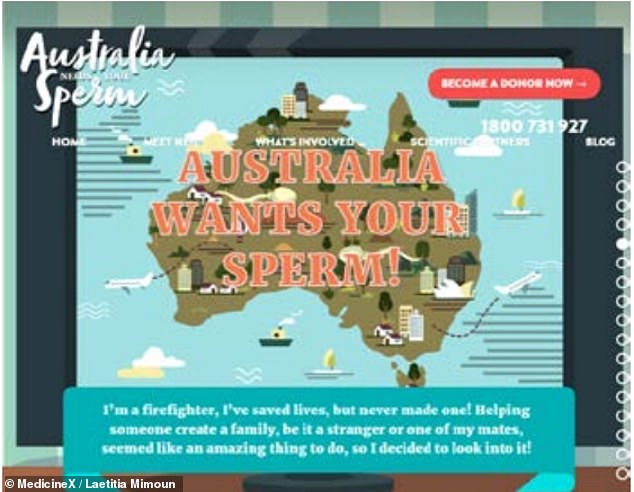 This image from MedicineX in Australia in 2017 associates sperm donation with the stereotypically masculine job of being a firefighter – it said ‘I’ve saved lives, but never made one!’ 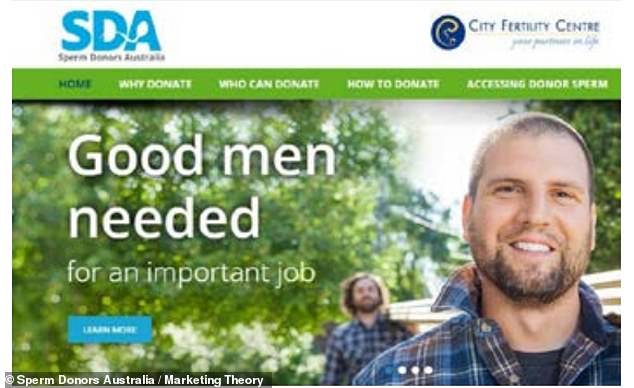 Sperm Donors Australia, on a page from 2016, said ‘Good men needed for an important job’, suggesting donating sperm would make a man a good person

Examples of the uber-masculine adverts include one from 2015 which depicts British army officer, Lord Kitchener, in the famous ‘Your country needs you’ image beside a picture of swimming sperm.

Others show men in superhero costumes with slogans like ‘be a hero’, and one had a caption purporting to be a fireman saying ‘I’ve saved lives, but never made one’.

Another way of guilting men into donating was what Dr Mimoun called ‘classical altruism’ – making donating sperm seem like the right, noble thing to do.

A page from the Sperm Donors Australia website showed a smiling man with the headline ‘Good men needed for an important job’, while another showed a photo of a man giving a piggy-back to a young boy above the caption ‘This life changing donation won’t cost you a cent’. 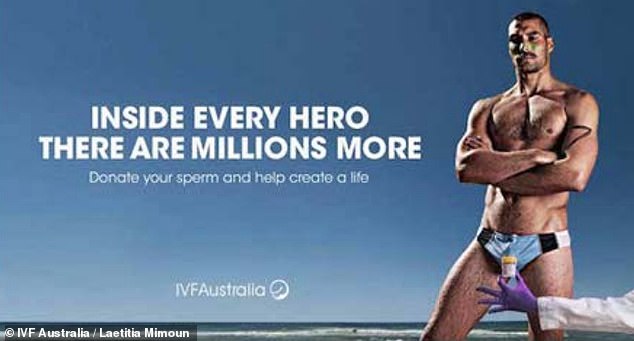 This billboard ad from IVF Australia in 2015 depicts a sperm donor as a heroic, muscular man, suggesting those are traits associated with men who donate sperm 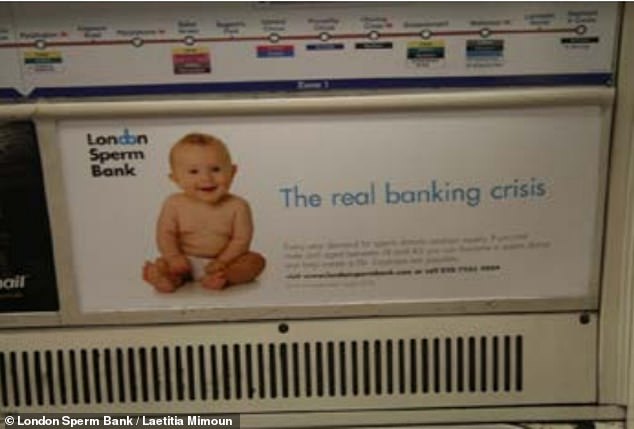 This London Sperm Bank advert, from 2016, was under the researchers ‘duty-bound soldier’ section because it calls on men to help solve a crisis 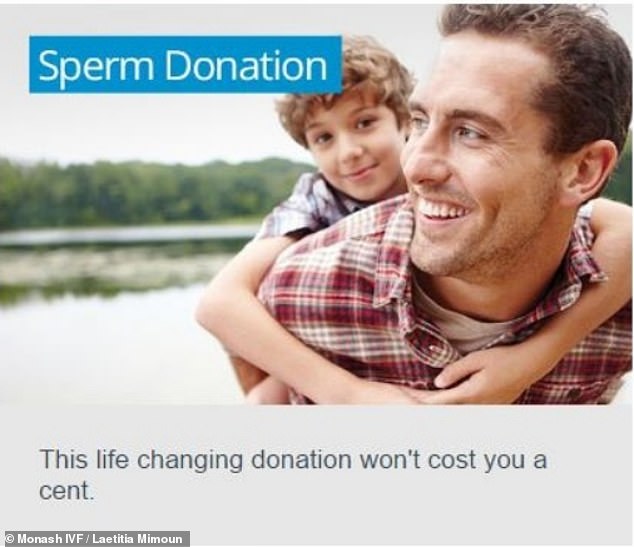 In this 2016 advert for Monash IVF, the clinic suggests donating sperm could be ‘life changing’, making it seem like a selfless and generous thing for a man to do

Other examples included posters showing athletic men in their underpants or videos showing them cooking barbeques or handing roses to women.

‘This has helped the industry in the UK and Australia to resolve their donor shortages to a great extent,’ she said.

‘It’s very interesting that sperm banks are able to procure sperm for free as long as they sell it as a way to affirm the masculinity of donors, especially in today’s context when the notion of masculinity is constantly challenged.’

The research was published in the journal Marketing Theory.

WHAT ARE THE UK’S SPERM DONATION RULES?

Sperm donation is commonplace in the UK and used to help people start families when they can’t have children of their own naturally – if, for example, a male partner is infertile, if both parents are women, or if the mother is single.

Clinics in the UK are not allowed to pay men to donate sperm, except up to £35 to cover expenses such as travel. More may be offered if accommodation is necessary.

A law change in 2005 means men can no longer donate anonymously and must agree for any children born from their sperm to be able to find out who they are after they turn 18.

However, a donor father will never be required to parent the child or pay child support.

Sperm donors are usually aged between 18 and 41, although older donors may be allowed in some cases.

A donor will visit a fertility clinic once a week for between three and six months to make a complete donation – at each visit the donor will ejaculate into a cup and their sperm be frozen.

Donated sperm cannot be used to create any more than 10 families per donor, and the donor is allowed to withdraw his consent at any time until the sperm has been used.