Fans have arrived at Dublin’s Croke Park dressed in various Spice Girl ensembles for the first stop of their hotly anticipated reunion tour.

While some don printed t-shirts with ‘sporty’, ‘posh’, ‘baby’, ‘ginger’ and ‘scary’, others went all out and dressed up as members of the famed 90s girlband.

Emma Bunton, Melanie Brown, Melanie Chisholme, and Geri Halliwell will take to the stage for their Dublin show at 8.15pm.

Jess Glynne is expected to perform at 7pm so 75,000 fans have arrived at the stadium and taken their seats.

And Emma Bunton is confident about the Spice Girls’ comeback, saying ‘I think we’re there’.

Baby Spice told Heart Breakfast: ‘It’s so much fun, being back on stage with the girls. Literally, we giggle to ourselves and of course we make mistakes in the dress rehearsals.’ 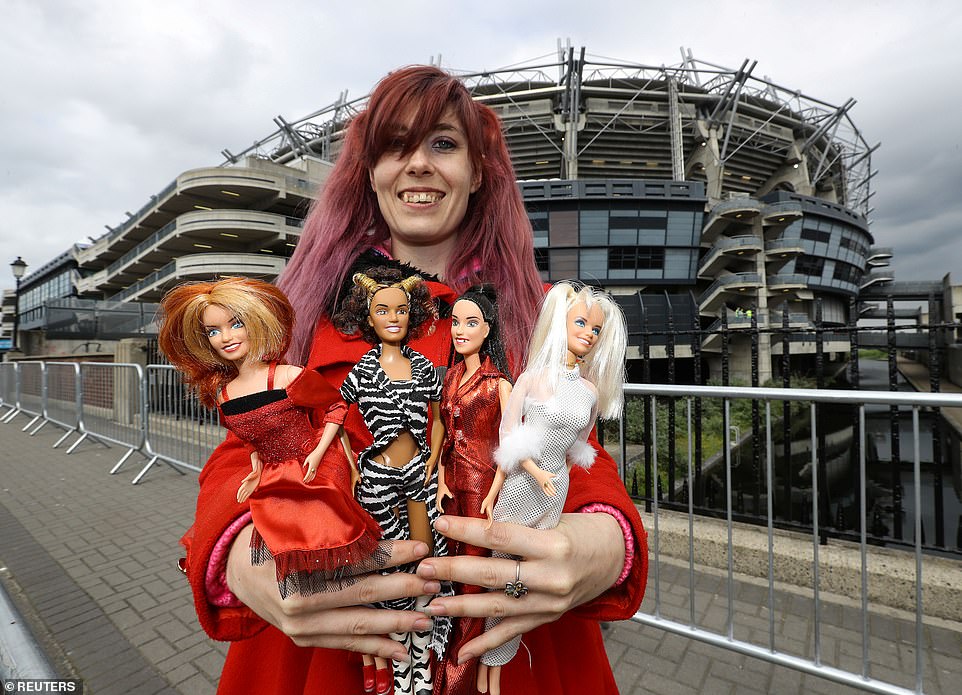 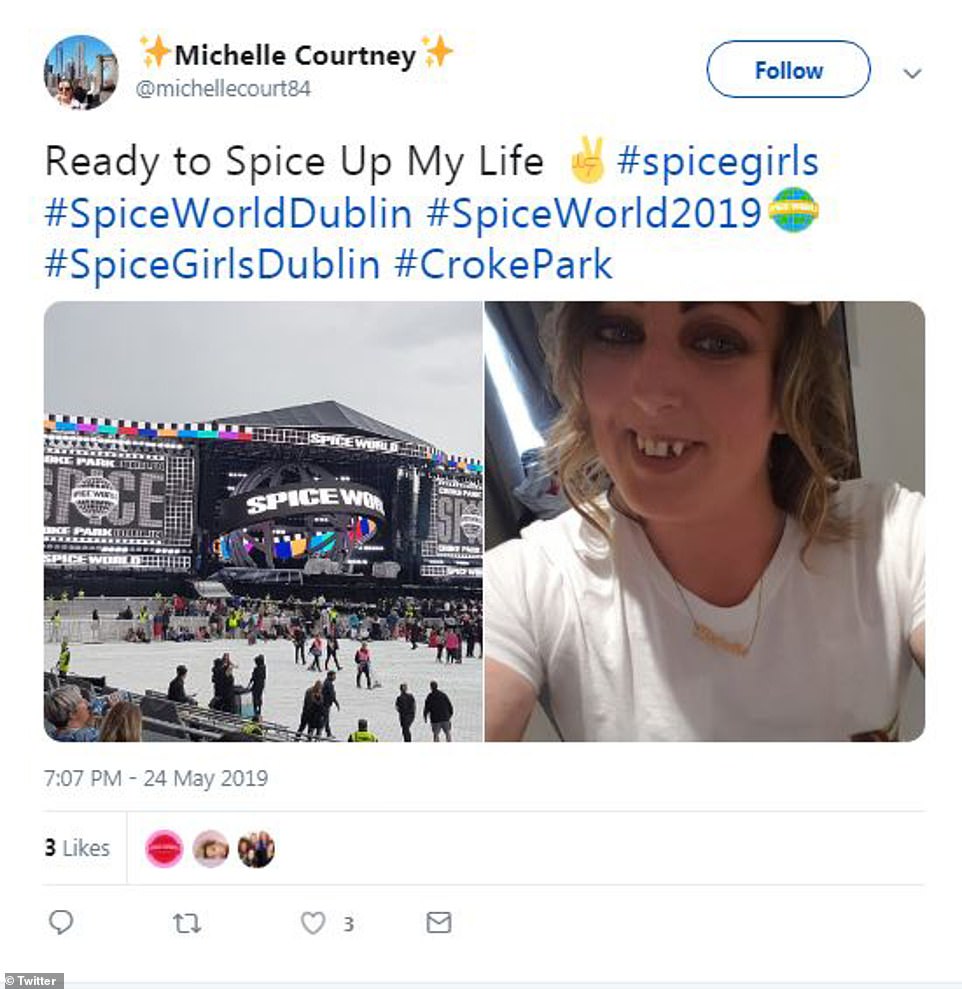 Michelle Courtney posted a selfie alongside a photograph of the inside of the stadium to Twitter with the caption: ‘Ready to Spice Up my Life’ 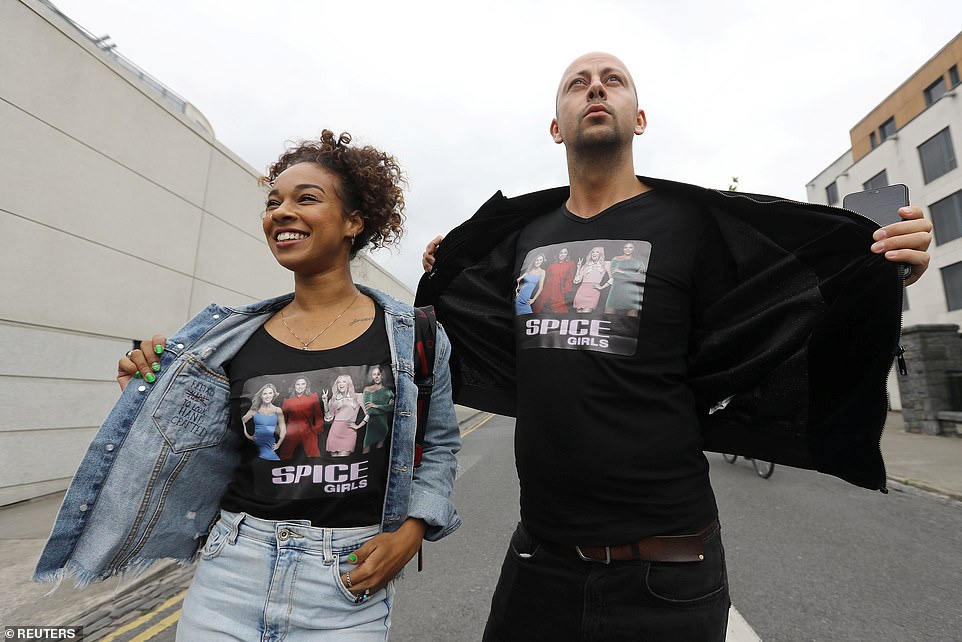 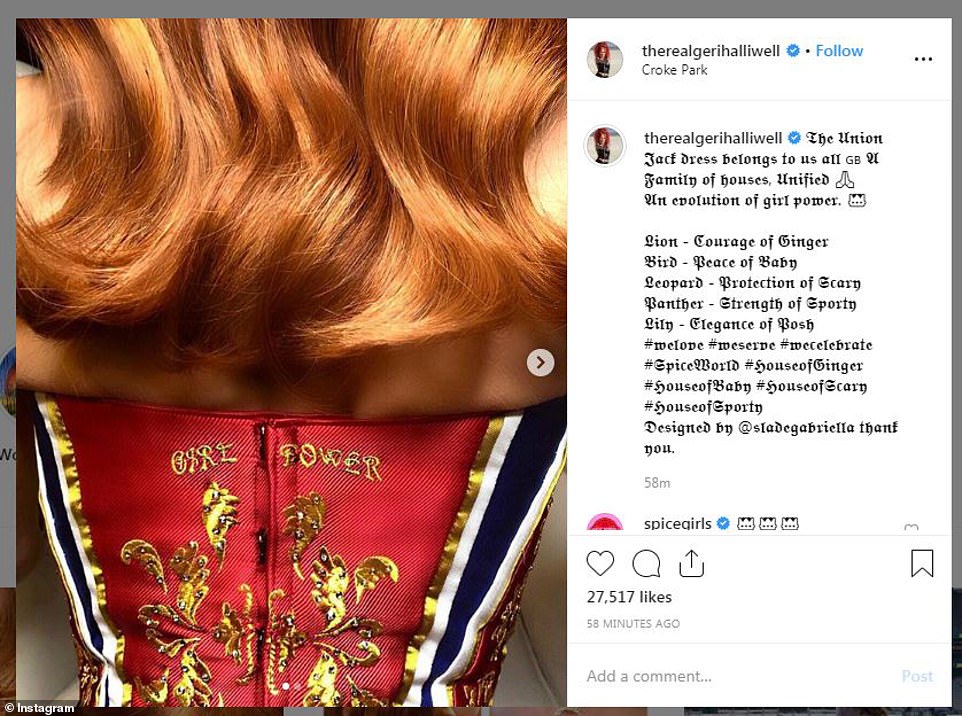 Geri Halliwell posted a photograph of one of her outfits for the night to Instagram with the caption ‘The union jack dress belongs to us all. Family of houses, unified, an evolution of girl power. Lion – courage of ginger. Bird – peace of baby. Leopard – protection of scary. Panther – strength of sporty. Lily – elegance of posh 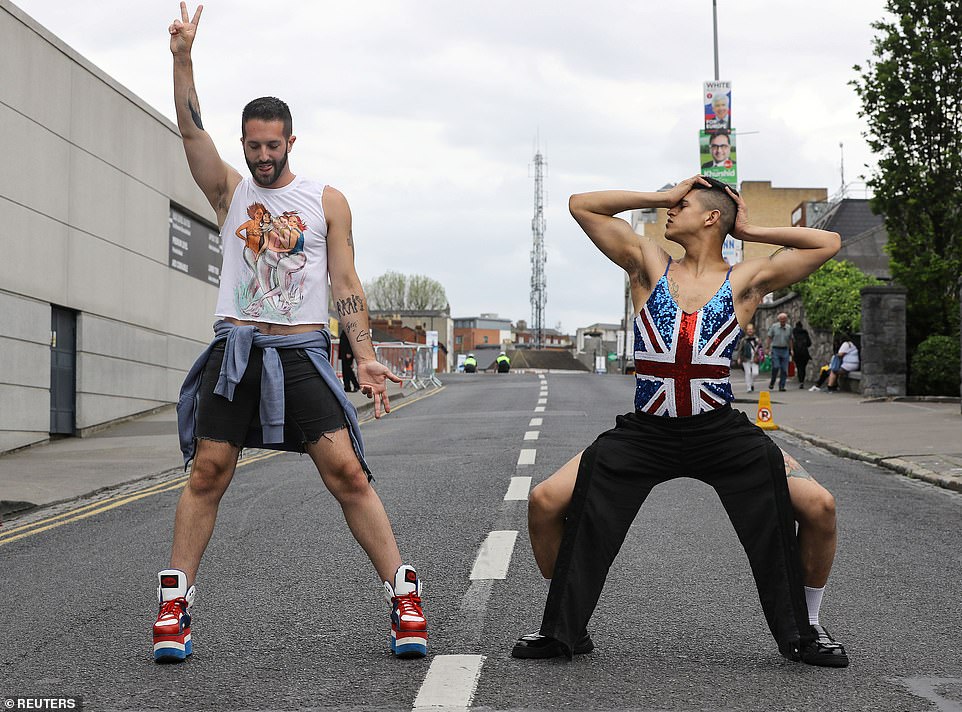 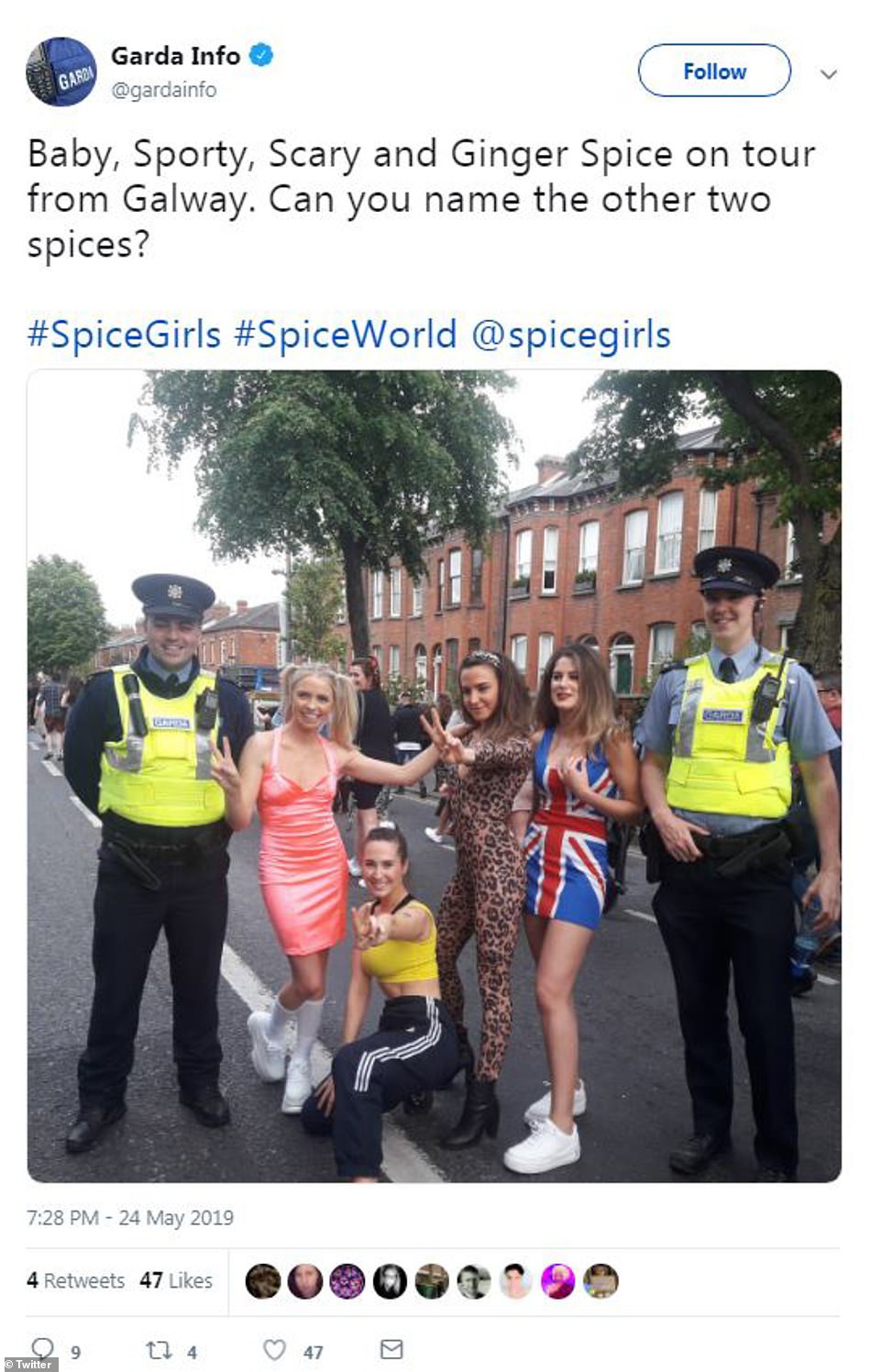 An Garda Siochana, the Irish police force, tweeted earlier this evening. The tweet said: ‘Baby, sporty, scary and ginger spice on tour from Galway. Can you name the other two spices?’ 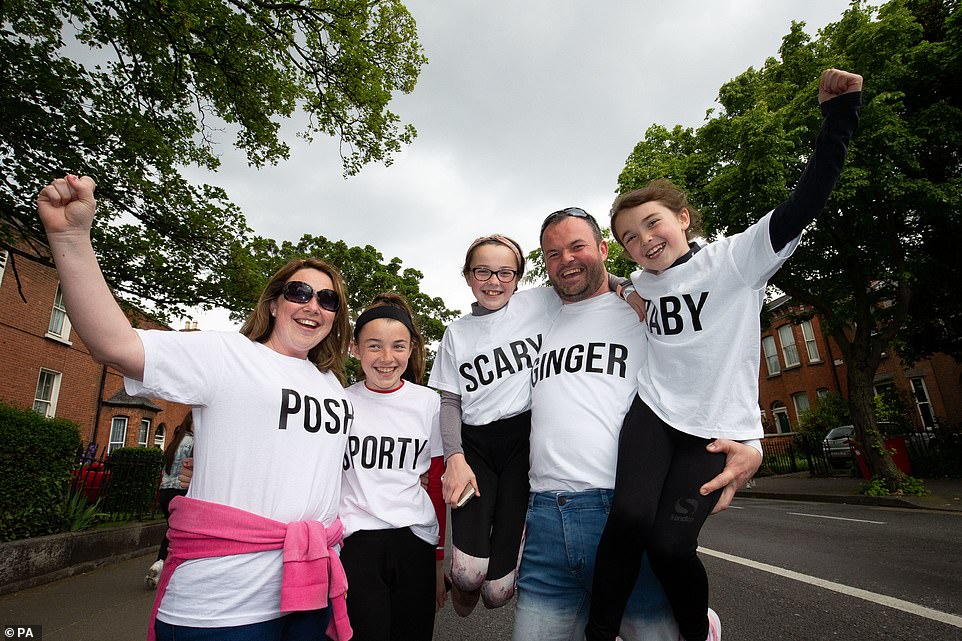 This family have dressed in white t-shirts with the nickname of each of the Spice Girls printed on them. Collette King, Cara King, 13, Erin King, 11, Brian King wore shirts with ‘Posh’, ‘Sporty’, ‘Scary’ and ‘Ginger’. And the youngest member of the family, seven-year-old Izzy King, has ‘Baby’ on hers

And she said: ‘I’ve remembered all the words and I’m just getting to grips with the choreography, so I think we’re there.’

The Spice Girls will reunite on stage for the first time in seven years when they perform in Dublin.

But Bunton said she ‘really hopes’ that Posh Spice will see her former bandmates at some point on the tour.

And she added: ‘She’s emailed me this morning so it’s lovely – I hope she comes along.’ 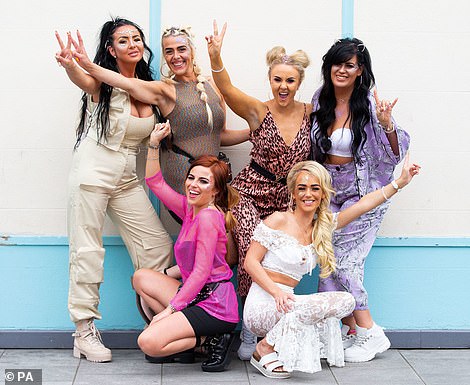 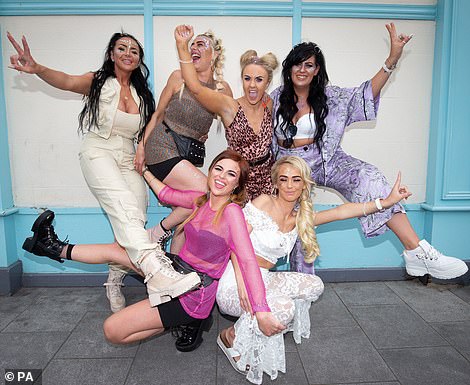 Dressed in some of the Spice Girls signature fashion looks these women could not look more excited for the start of tonight’s concert. (Rear left to right) Bella Flynn, Celine Buckley, Lisa Donohue, Amanda Mulvaney (front left to right) Kellie Buckley and Gemma Collins. The girls are dressed in brightly coloured co-ord outfits with chunky boots and glitter on their faces 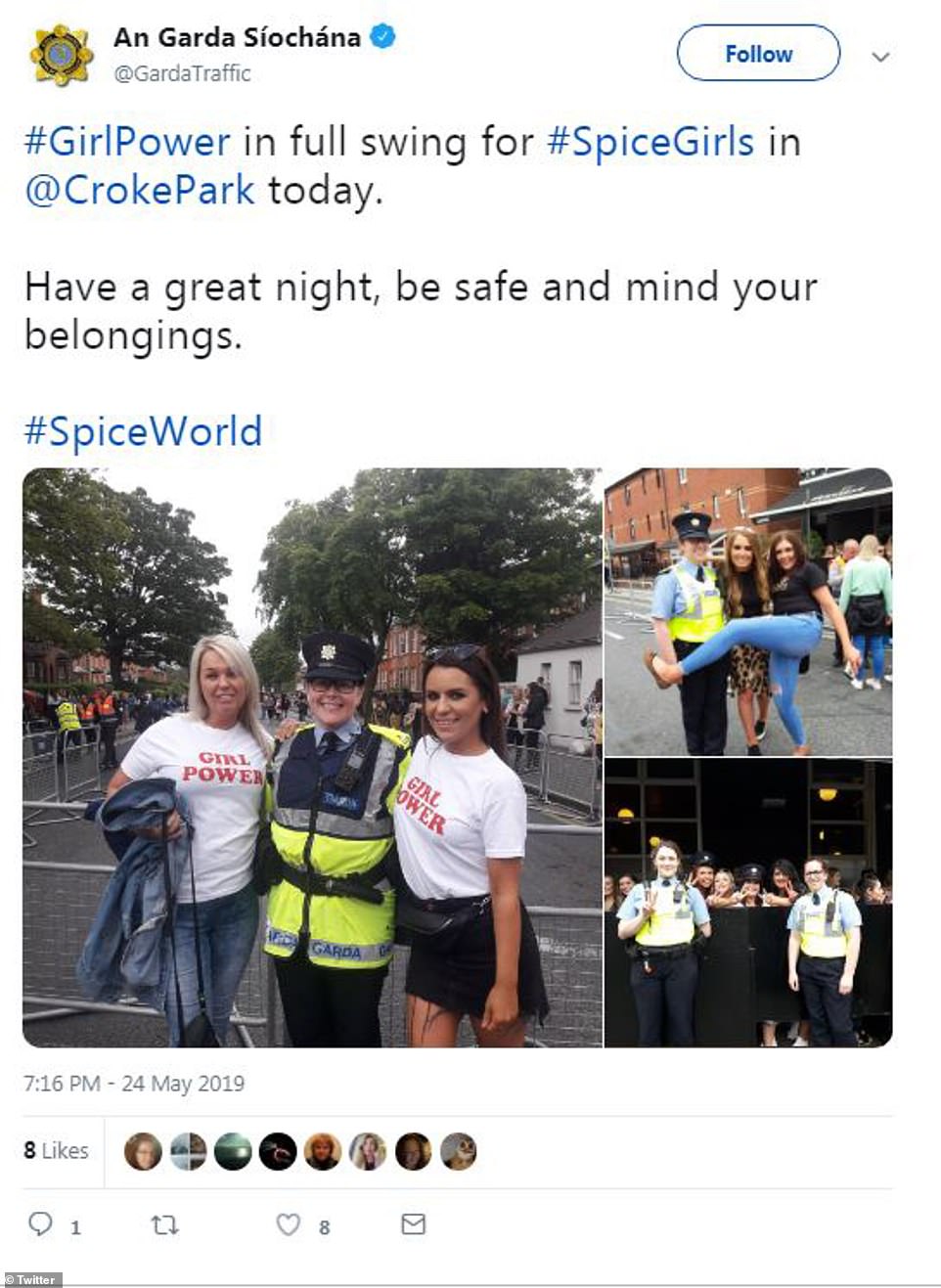 Garda traffic enforcers tweeted ‘#girlpower in full swing for #SpiceGirls in @CrokePark today. Have a great night, be safe, and mind your belongings’

Bunton said she had ‘butterflies in my tummy’ and that she was wary about putting on her trademark, platform Buffalo boots ‘cos I’ve fallen over in them a few times’.

She said the band were getting on, but quipped: ‘It’s the first night tonight, so who knows what’s going to happen.’

The band had to deny rumours of a rift in April following Brown’s claims that she had a one-night stand with Horner in the Spice Girls’ heyday.

The Spice World Tour was announced last November and will be the first time the group has performed since the closing ceremony of the London Olympics in 2012.

Horner shared images of the set-up for the performance, which features an imposing Spice World sculpture and large screens on each side of the stage. 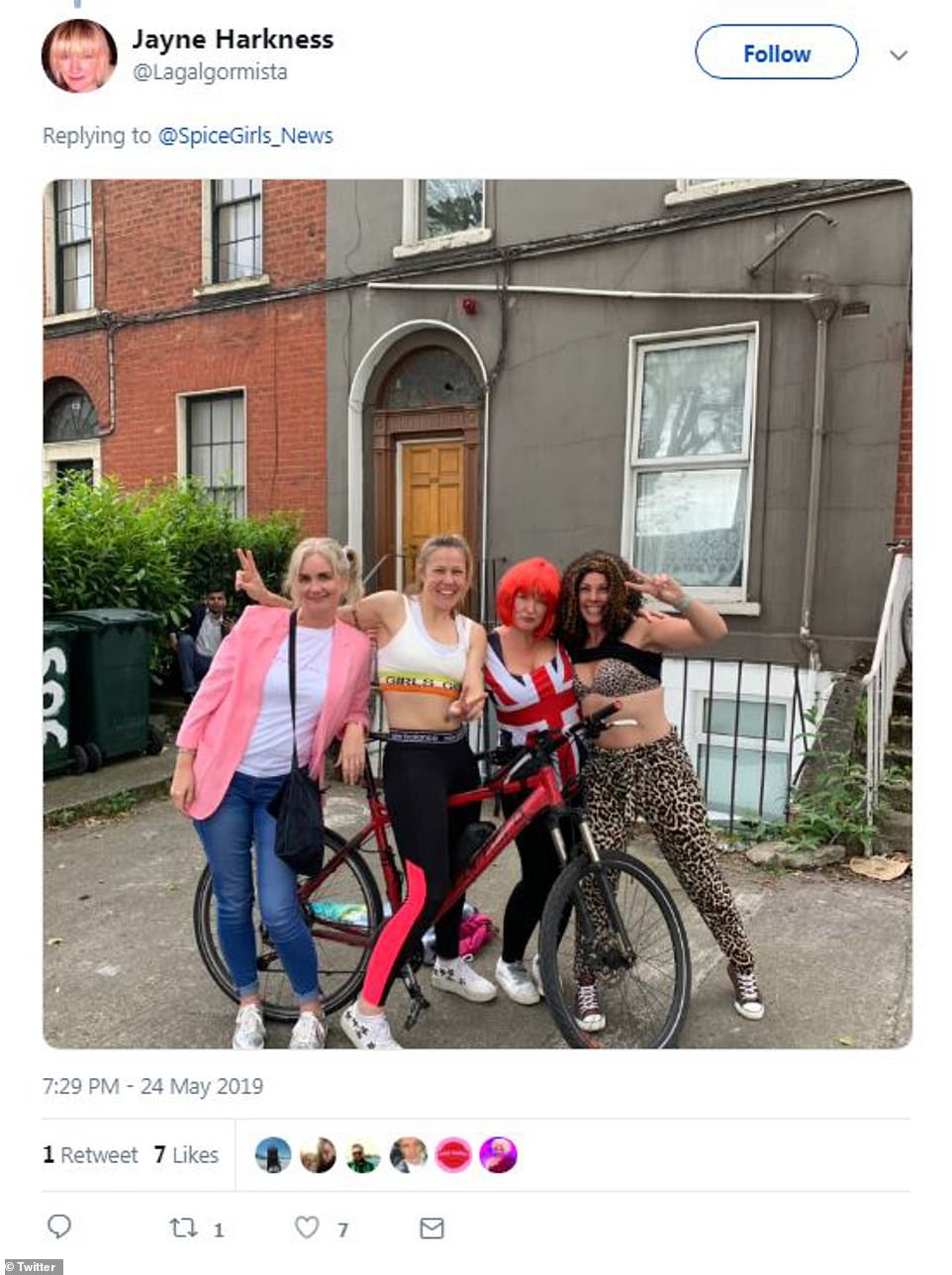 Jayne Harkness tweeted a photo of herself an her friends dressed as the Spice Girls. Scary is dressed in leopard print, sporty in yoga pants, baby in pigtails and ginger in a union jack dress 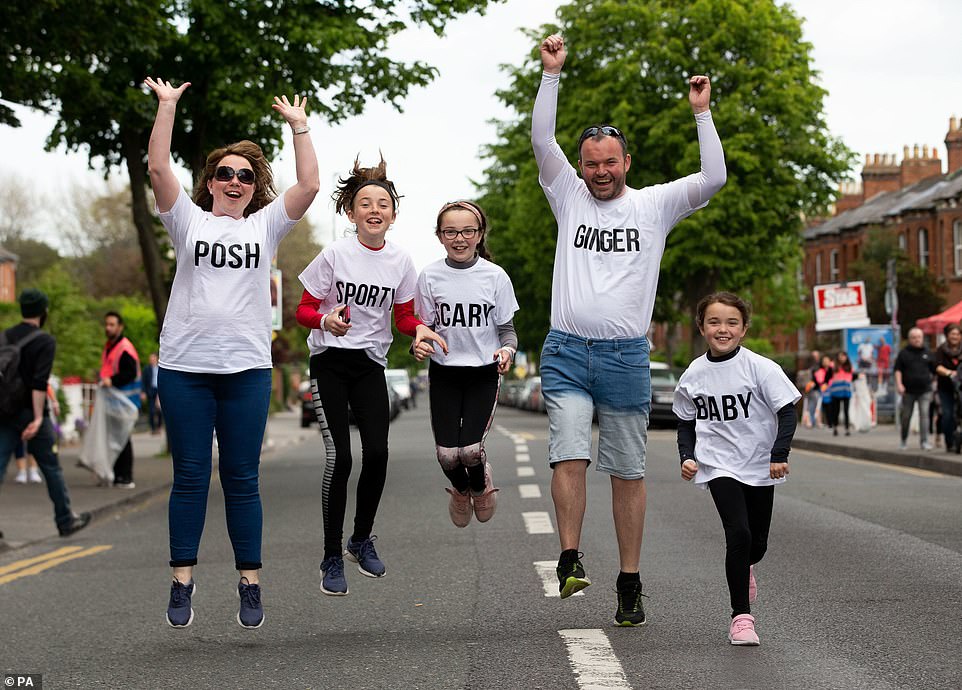 Jumping for joy: As fans head towards Croke Park this family takes a moment to jump for a photo. Collette King, Cara King, 13, Erin King, 11, Brian King and Izzy King, 7, are dressed to impress in matching t-shirts 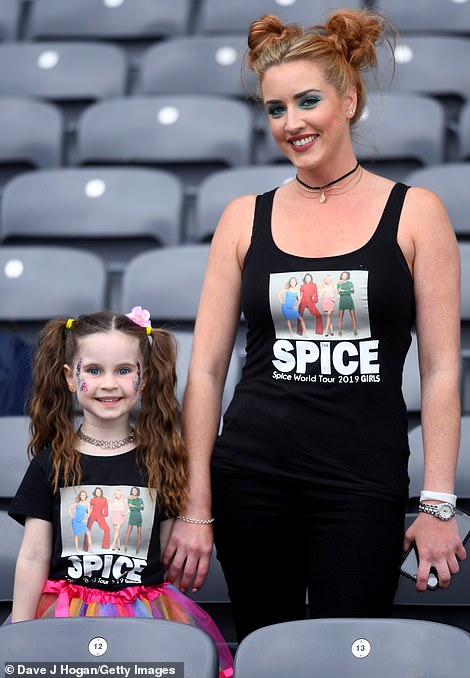 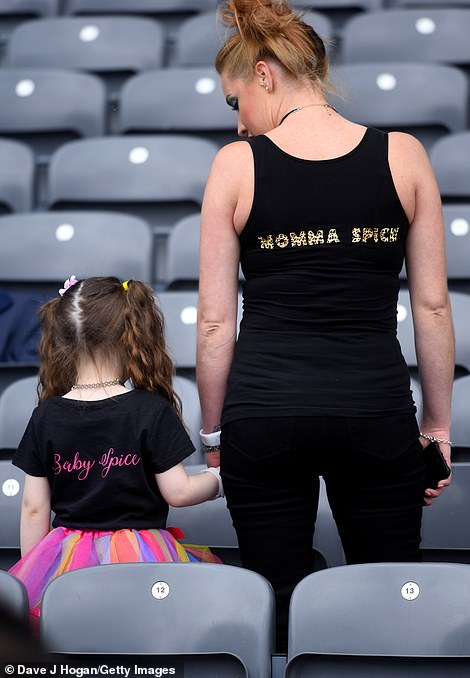 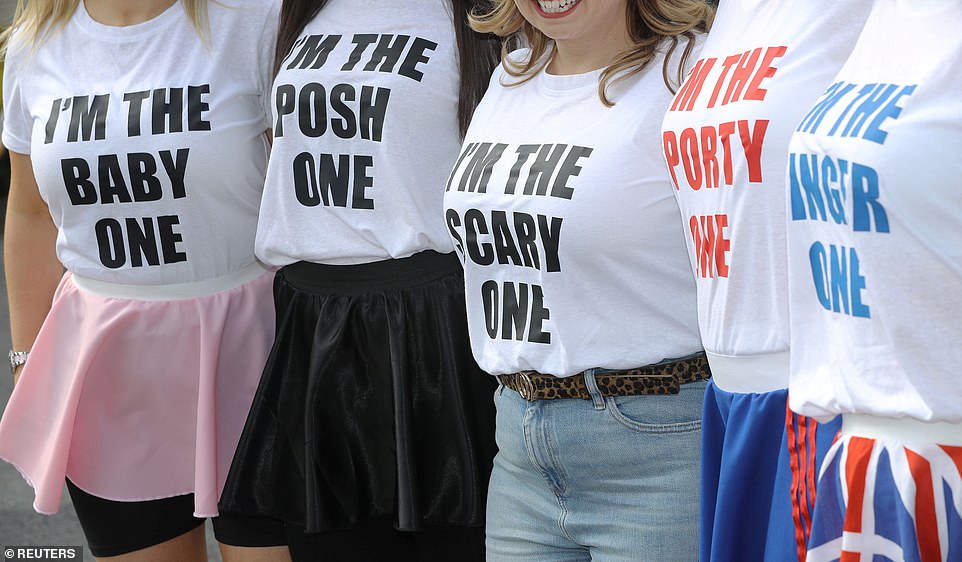 This group teams skirts and jeans with t-shirts explaining which spice girl they are. The bold black, red and blue fonts says they are ‘the baby one’, ‘the posh one’, ‘the scary one’, ‘the sporty one’ and ‘the ginger one’ 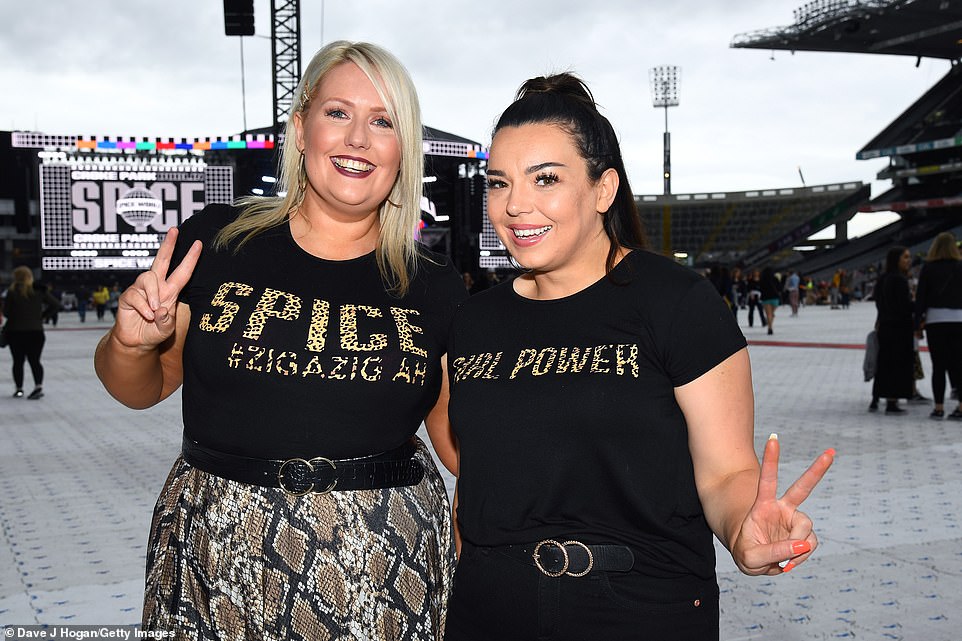 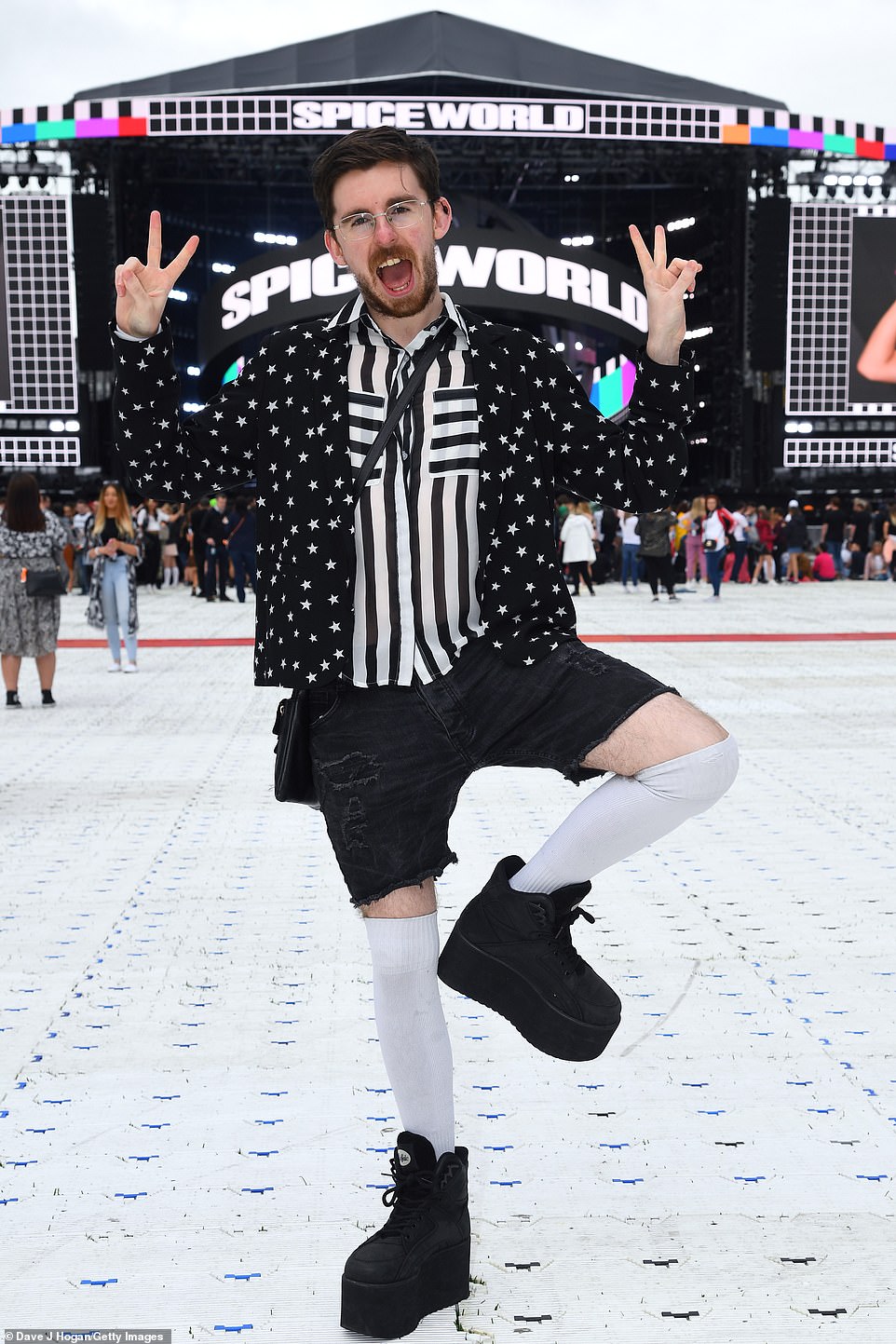 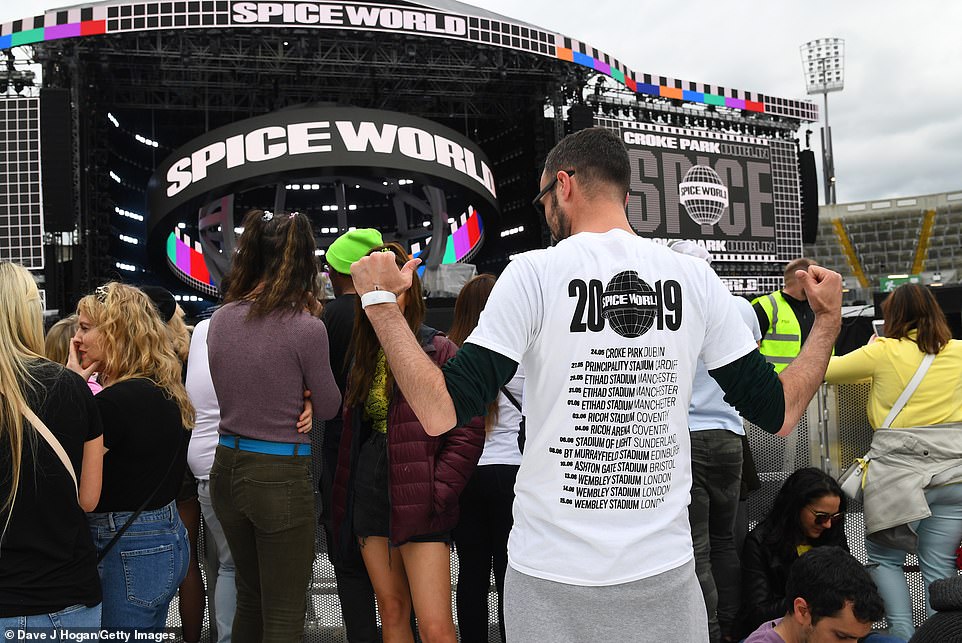 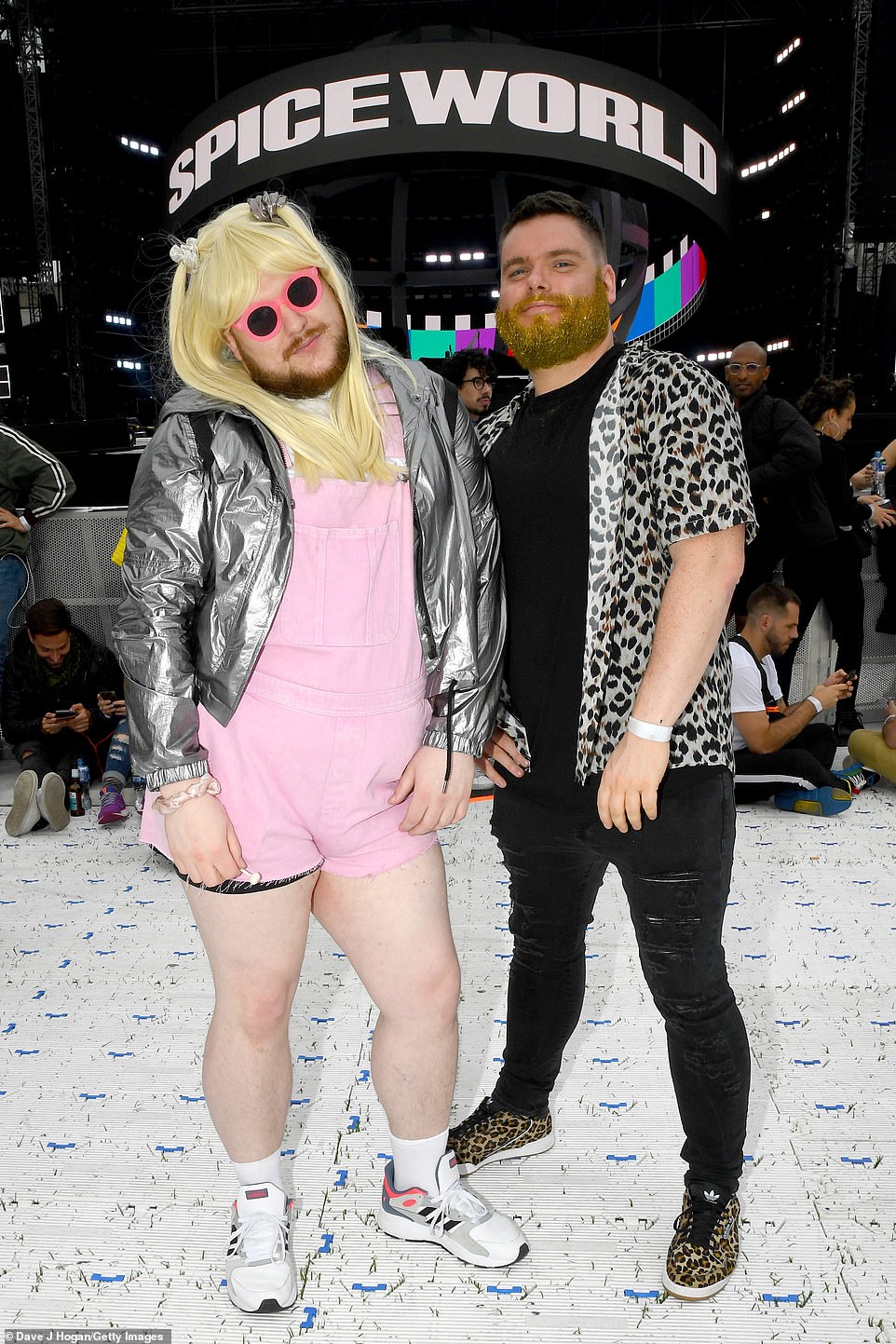 With gold glitter in his beard Michale Keys poses with Joe Maccabie ahead of the show. He’s also wearing leopard print – made popular by Scary Spice Mel B in the 90s. Meanwhile Joe is dressed as Baby Spice Emma Bunton 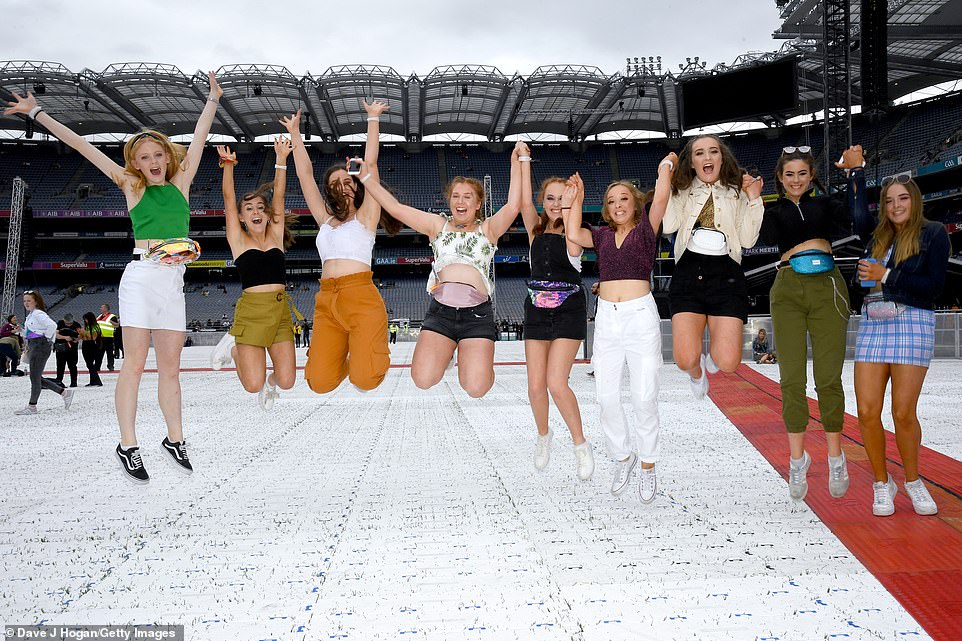 Fans from Kilkenny arrive to watch The Spice Girls perform. They are of the first in the doors as thousands more wait outside to get in to the stadium