Spies at Britain’s eavesdropping agency have stepped out of the shadows to reveal their human side in a bid to recruit youngsters who like puzzles.

GCHQ officer Fiona was deployed to Afghanistan where she passed on intelligence to British troops telling them the location of roadside bombs in a bid to save lives.

She said she always went armed with a couple of handbags and matching shoes so she could ‘feel vaguely human’ amidst the beige, sand and dirt.

Her story – and that of two others – form part of a exhibition at the London Science Museum which showcases dozens of gadgets and artefacts for the first time.

One of the items on display is a shipping container, pictured, which has been turned into a field office – complete with gas masks and body armour – for use by officers in war zones

Fiona, who worked in Kabul in 2006 as a communications officer, said her role was ‘to make sure commanders in the field were given the intelligence they needed.’

She said: ‘When you are deployed at the front end you can see a report changing somebody’s plans… that has quite a significant impact.

‘I feel immense pride. It was without a doubt one of the toughest jobs I have ever done and probably will ever do.’

She added: ‘I would always deploy with a couple of handbags and matching shoes because that way you can at least feel vaguely human – even though you’re surrounded by military stuff. All their stuff is beige.’

Jane, who works as head of compliance in the counter-terrorism department was working during the 7 July London bombings, in which 52 people lost their lives. 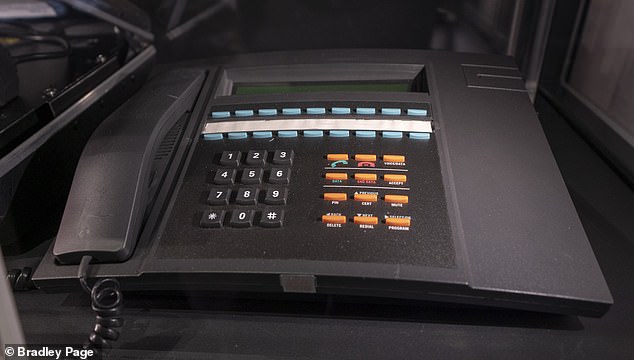 The Queen’s phone, pictured, is also on display at the exhibition. It is a regular telephone that becomes a secure digital one when used with a physical key 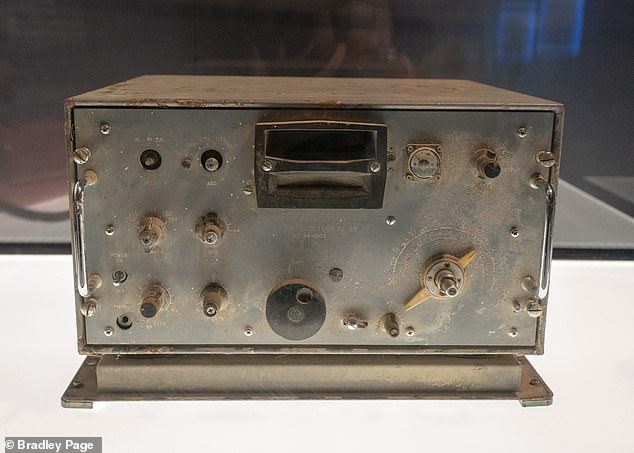 She said: ‘We started to see people coming out of tube stations. We were as confused as everybody else.’

She said that on a ‘personal level it changed the course of my career’ because she has never worked on a mission other than counter terrorism.

‘I feel a very strong sense of right and wrong and therefore it’s really important to me to do something where I feel that I am actually fighting for right in the world.

She added: ‘Sadly I don’t think counter terrorism is going anywhere because as long as people feel that there is injustice in the world, there will be people who will opt for that violent route.’ 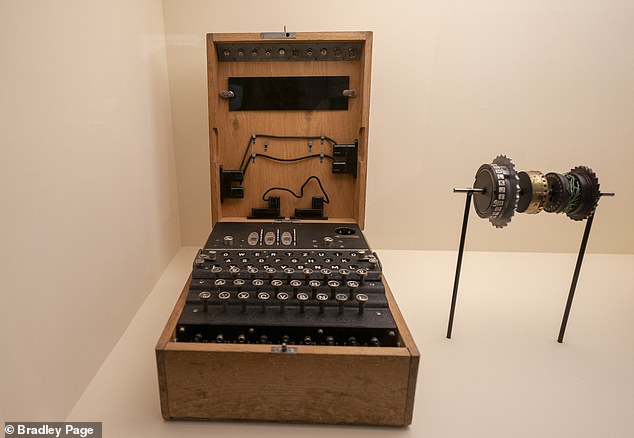 An Enigma Machine, pictured, from 1937 is also included in the show at the Science Museum 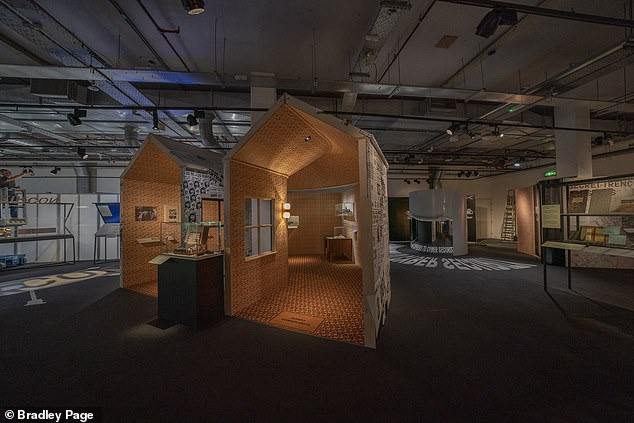 A replica house, pictured, of a 1960s house belonging to people in the Portland Spy ring is also seen and includes several items recovered by GCHQ

Amo, a senior south Asia linguist left his job in sales to work for GCHQ and now focuses on human trafficking.

He said he had served nearly ten years, adding: ‘The organisation’s changed, you could argue the world’s changed in those 10 years as well.

‘But the feeling of getting up in the morning and going to work at GCHQ hasn’t changed.’

The exhibition, called Top Secret: From ciphers to cyber security, is billed as a unique insight into the secret history of GCHQ.

On display are artefacts spanning decades. They include Margaret Thatcher’s secure portable telephone, which she had with her when she was out and about.

Exhibition project manager Hannah Daley said: ‘This particular telephone was used when she changed the rules of engagement during the Falklands War to give the order for the sinking of the Belgrano.’ 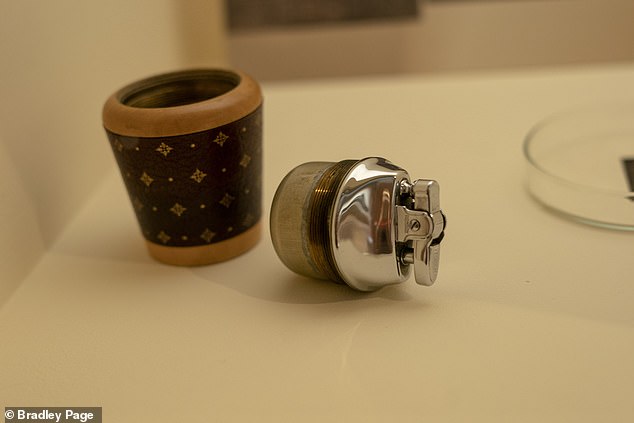 Spies Peter and Helen Kroger used a cigarette lighter, pictured, which had a compartment in the base which stored a miniature timetable detailing when to exchange messages 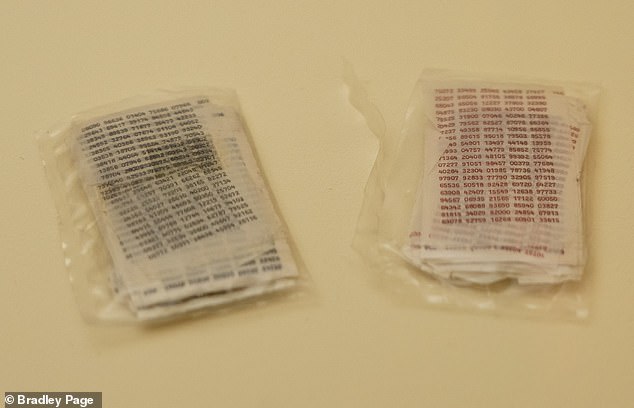 Pictured are the lists of numbers hidden in the secret lighter compartment. The Portland spy ring was one of the key Russian spy rings of the Cold War 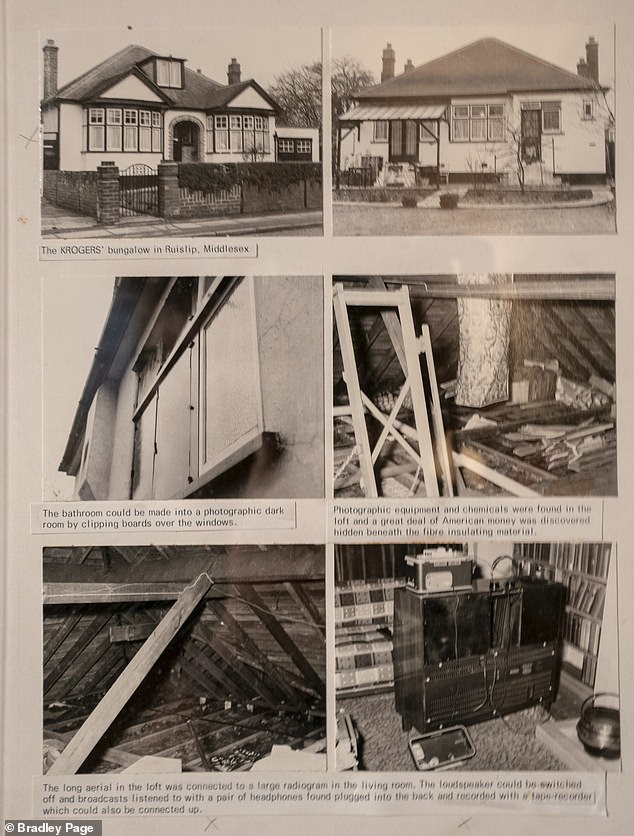 In May 1982 a British submarine sank the Argentine navy cruiser, the General Belgrano.

More than 300 sailors were killed in what remains one of the most controversial actions of the Falklands War.

Also displayed is a key and a phone used by the Queen to secure her communications up until 1995, when she was given a new device.

Ms Daley said: ‘The Queen is GCHQ’s longest standing individual customer. They’ve been looking after her communications since her reign started.’

Museum staff have also recreated a 1960s house belonging to Peter and Helen Kroger of the Portland spy ring, one of the key Russian spy rings of the Cold War. 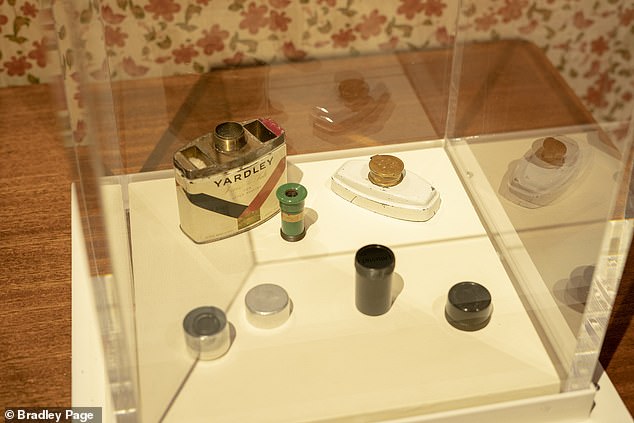 Another gadget included in the new exhibition and used by the spy ring was a talcum powder tin, pictured, which was able to conceal a magnifying device needed to read ‘microdots’ 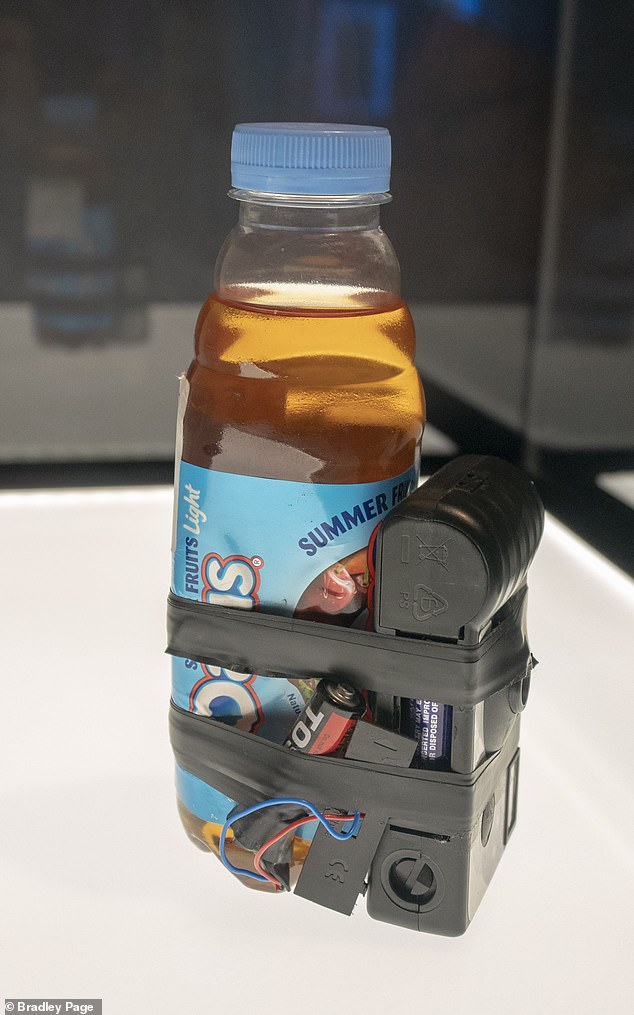 Ms Daley said: ‘They were sending these cutting edge military secrets back to Soviet Russia just from a bungalow in suburban London.’

The couple – whose real names were Morris and Lona Cohen – moved in to the bungalow as a cover for their clandestine operations.

Their recreated home features a secret radio transmitter that was hidden underneath their kitchen floor.

They used it to send messages to the Soviet security services and receive instructions in return. 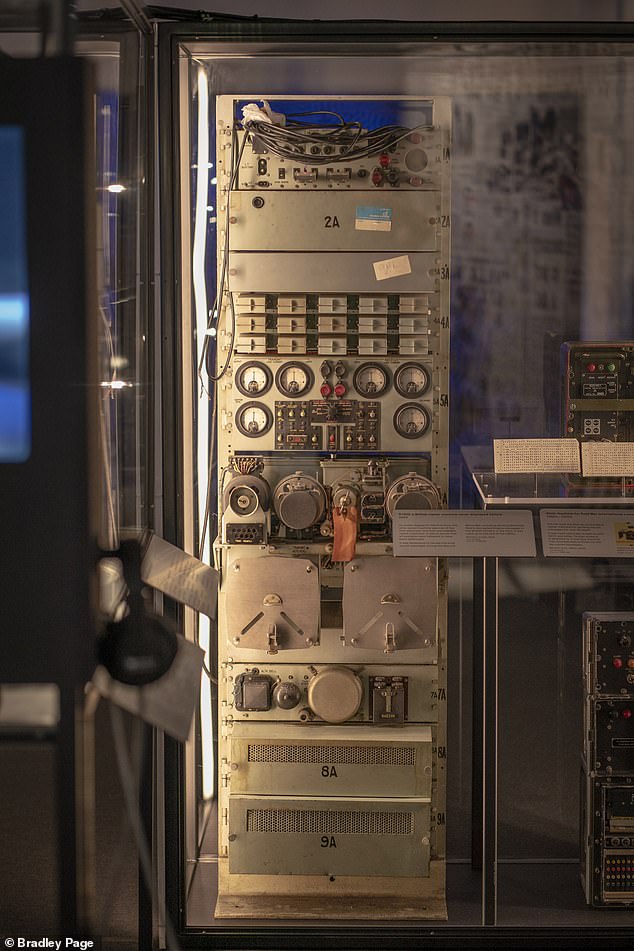 This British Cipher machine has never been displayed before. It was developed to handle the most secret messages during the second world war 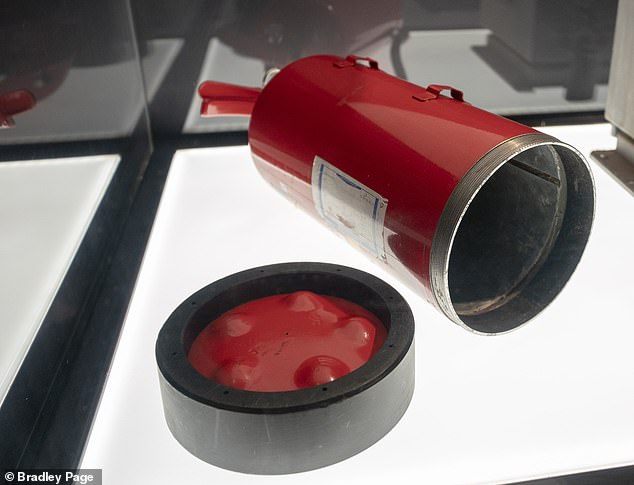 More modern items on display include a fire extinguisher, pictured, that has a hidden compartment only revealed when unscrewing the base

GCHQ monitored their communications and was able to prove that messages found in the Krogers’ house were from the Soviet Union.

The spies used a cigarette lighter which had a secret compartment in the base which stored a miniature timetable detailing when to exchange messages.

Another gadget used was a talcum powder tin which was able to conceal a magnifying device which was used by the leader of the spy ring to read ‘microdots’.

Those more modern items on display include a fire extinguisher that has a hidden compartment only revealed when unscrewing the base.

The inside is lined with lead- a common tactic used by drug smugglers to try to thwart X-Ray machines.

The extinguisher was discovered as it entered one of the UK’s ports, where it was seized by the Border Force during customs checks. 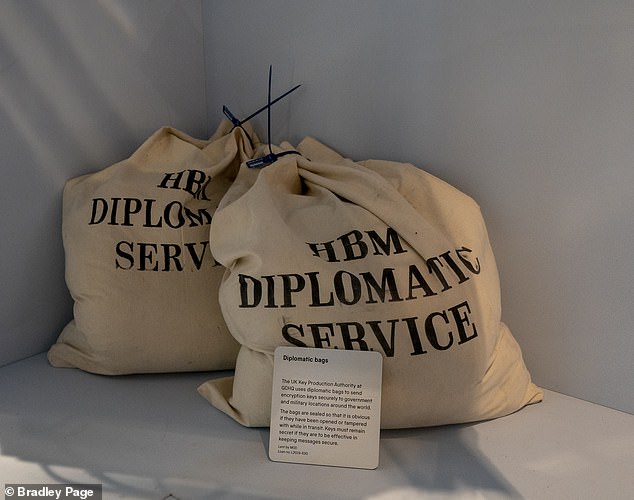 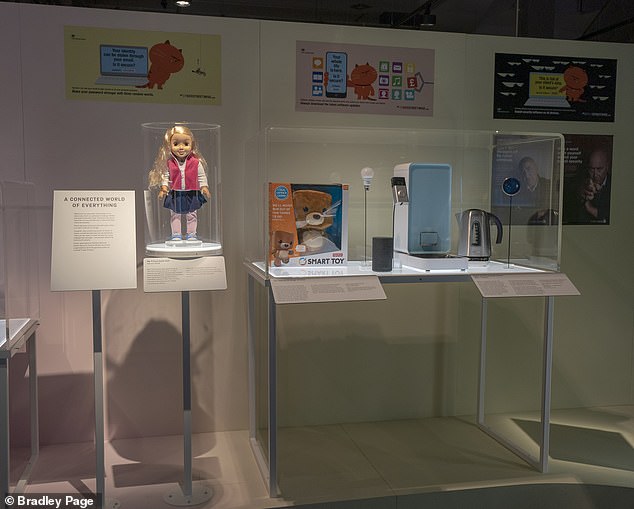 As well as items from the war and the 1960s, the exhibition includes more modern things, some examples pictured, that can be connected and exploited in cyber attacks

Ms Daley added: ‘They’ve never told their story in this way before. It’s been an amazing process to have an insight into this secret world that they don’t normally share.’

GCHQ chief Jeremy Fleming said: ‘For the first time the public will be given a glimpse into our secret history of amazing intelligence, world-leading innovation, and most of all brilliant people.

‘And – as the threats to the UK become more diverse and more complex – it’s a chance to encourage the next generation of recruits.

‘Because at GCHQ we believe that with the right mix of minds anything is possible.’

Tony, GCHQ’s historian who has been with the agency for 35 years, said: ‘We are not shy of saying part of this whole project is about recruitment.’

He said the service was trying to attract youngsters, females and ‘anybody who likes puzzles’. The exhibition at the Science Museum starts today.