Spirit airlines has been forced to apologize to a Parkland school shooting survivor after he complained about a crewmember making a speech about banning semi-automatic rifles.

Kyle Kashuv, 16, survived the Valentine’s Day shooting at Marjory Stoneman Douglas High School in Parkland, Florida, and has been campaigning for gun reform since.

However, unlike many of his fellow survivors, he considers himself an NRA and Trump supporter and wants to protect the Second Amendment.

Parkland survivor Kyle Kashuv, 16, who has been campaigning for pro-Second Amendment gun reform, was angered by a Spirit Airlines crew-member’s ‘speech’ about banning AR-15s 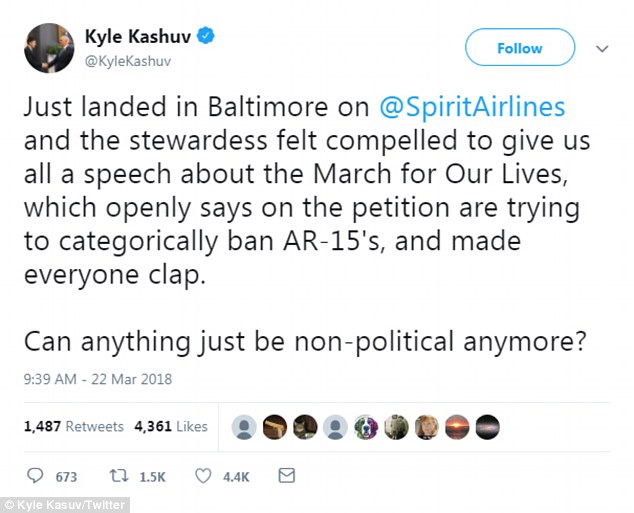 Frustrated: Kashuv was on his way to Washington to attend a ‘millennials’ panel at the White House with Ivanka Trump, when he took offense with the stewardess’s lecture 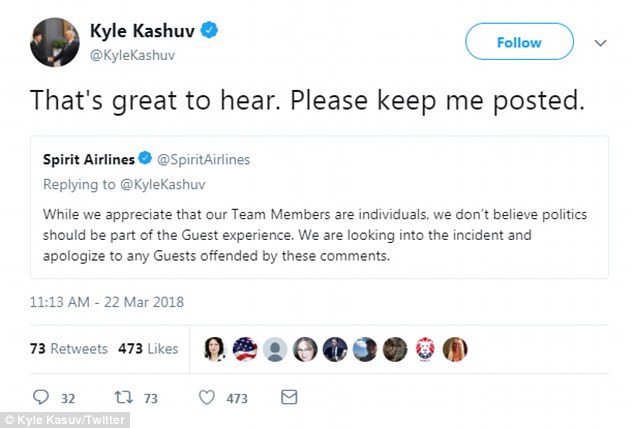 But when Spirit was quick to reply with an apology, Kashuv let them off the hook

En-route to Washington D.C. to attend a ‘millennials’ panel at the White House with Ivanka Trump, he claims a member of staff on a Spirit Airlines gave the passengers a ‘speech’ after landing at Baltimore Airport.

He tweeted: ‘Just landed in Baltimore on @SpiritAirlines and the stewardess felt compelled to give us all a speech about the March for Our Lives, which openly says on the petition are trying to categorically ban AR-15’s, and made everyone clap.

‘Can anything just be non-political anymore?’

His tweet prompted the airline to apologize, and replied to his tweet saying: ‘While we appreciate that our Team Members are individuals, we don’t believe politics should be part of the Guest experience.

‘We are looking into the incident and apologize to any Guests offended by these comments.’

Kashuv was in the building when Nikolas Cruz walked into Marjory Stoneman High School in Parkland, Florida , and killed 17 people with an AR-15 last month.

In the immediate aftermath of the shooting, Kashuv said that he supported Trump in the last election and considers himself a Republican.

But he said the shooting made him reconsider his position on guns, saying there needs to be stronger background checks to make sure mentally unstable people like Nikolas Cruz can’t purchase weapons. 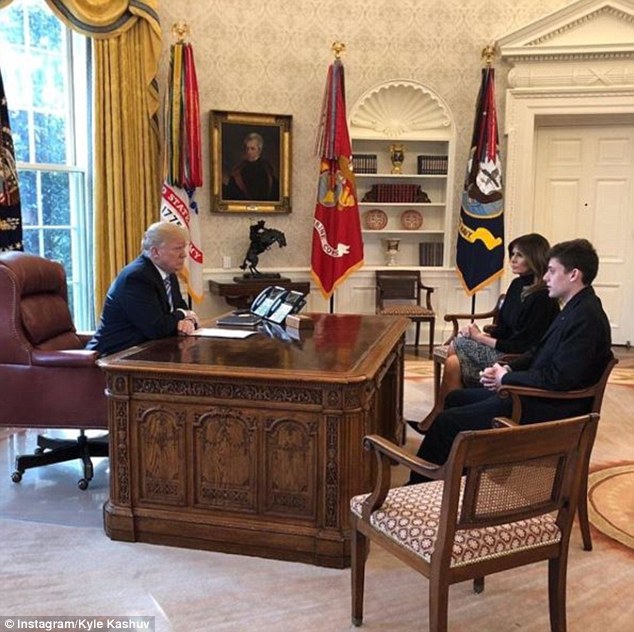 ‘Previously I believed that everyone under the Constitution should be allowed to have guns, but I now realize that not everyone should have guns and we should have way stricter background checks and mental evaluations,’ he said.

‘We need to a middle ground and have some reform.’

Kashuv is calling for bipartisan legislation, and has been meeting with Republican politicians in efforts to help protect what he believed to be the core of the second amendment.

This has seen him clash with fellow survivors from the Parkland shooting, in particular the founders of the March for Our Lives who are calling for a blanket ban on assault weapons in the U.S.

Meanwhile a new Time magazine cover featuring five of the shooting survivors has drawn some criticism.

In the center of the cover stands Emma Gonzalez – a high school senior who gained notoriety after her impassioned speech about gun violence just days after the shooting – with her arms crossed across the chest.

The headline reads ‘ENOUGH’ in capital letters with four other student activists – Jaclyn Corin, Alex Wind, Cameron Kasky and David Hogg – featured on either side of Gonzalez.

But conservatives criticized the cover claiming it was missing the other side of the debate, specifically Kashuv. 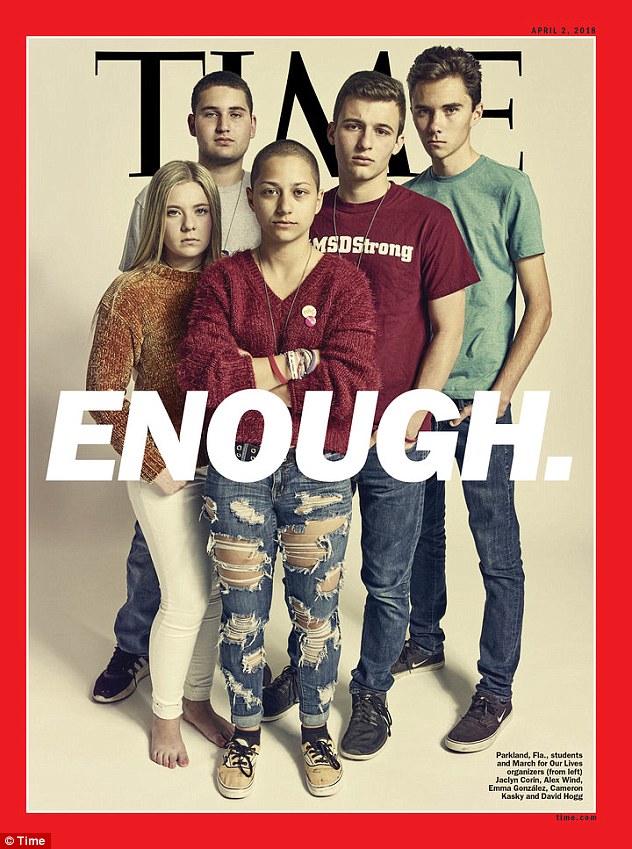