‘Thank you for your service, dedication and sacrifice for our great country’: Former England captain John Terry and boxing world champion Tyson Fury lead sport’s tributes to Queen Elizabeth II during her funeral

The sporting world came together on Monday as many paid their respects to Her Majesty Queen Elizabeth II who was laid to rest.

The United Kingdom’s longest-serving monarch, who ruled for 70 years, passed away on September 8 at the age of 96.

The Queen’s funeral service took place at 11am at Westminster Abbey in London, the historic church where Britain’s kings and queens are crowned.

Many sportspeople past and present took to social media to pay their respects to the Queen, including former Chelsea and England football captain John Terry.

Terry, who skippered his country between 2006 and 2010, tweeted alongside a picture of Her Majesty: ‘Today we very sadly say goodbye to our greatest ever Monarch, Queen Elizabeth II @RoyalFamily

‘Thank you for your service, dedication and sacrifice for our great country.

‘Rest In Peace Your Majesty.’ 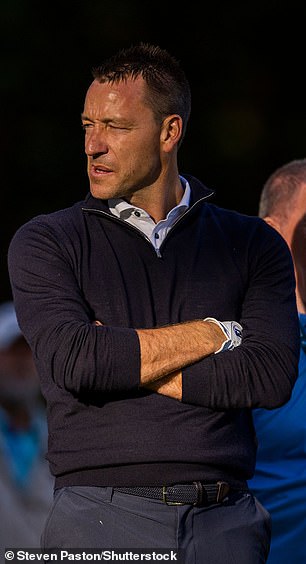 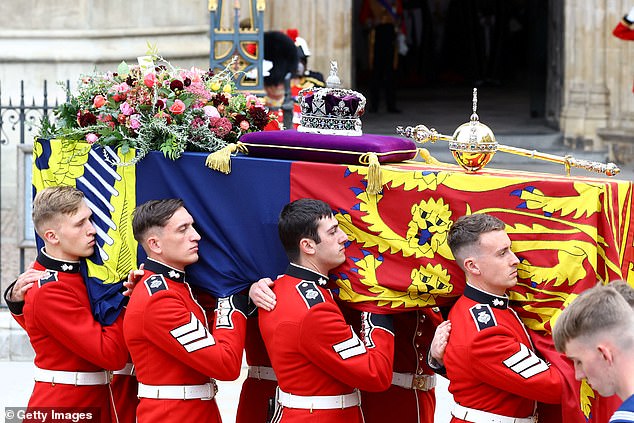 Heavyweight boxing champion Tyson Fury posted a video online, in which he said: ‘I’ve been off social media for the last 10 days mourning in respect for our Queen who’s died.

‘I hope the funeral goes well, condolences to the full family and may she rest in heaven for eternity.’

The English Football League wrote on its Twitter page: ‘On the day of the funeral for Her Majesty Queen Elizabeth II, the EFL and its clubs would like to join the nation in reflecting on the late Sovereign’s remarkable life of service to the country, and our thoughts are with the Royal Family.’

The manager of the Northern Ireland men’s national football team Ian Baraclough and his assistant Jimmy Nicholl also paused for a moment of reflection at Windsor Park in Belfast on Monday morning. 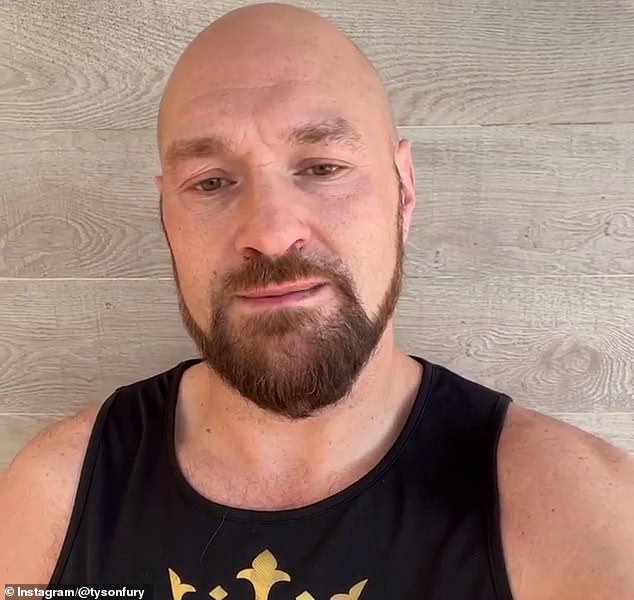 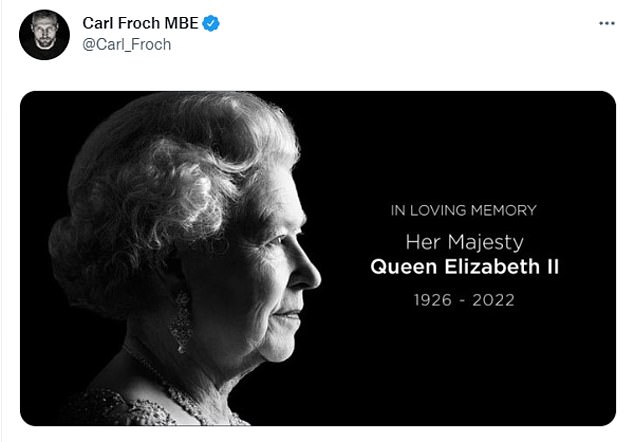 Southampton were among the Premier League football teams paying tribute, and posted a photo of the Queen presenting the FA Cup trophy to their captain Peter Rodrigues after the 1976 final at Wembley.

Top-flight football resumed over the weekend, with teams honouring the late monarch through moments of silence, specially-designed programmes and other tributes.

Racing, the Queen’s favourite sport, originally had meetings scheduled at Leicester, Warwick, Hamilton Park and Wolverhampton but they were cancelled after the funeral date was announced.

The Queen was patron of numerous sporting institutions including the FA, British Olympic Association, the MCC and the Commonwealth Games Federation.

In 2012, she famously showcased her acting talent alongside Daniel Craig in a James Bond video for the Olympic opening ceremony in London. 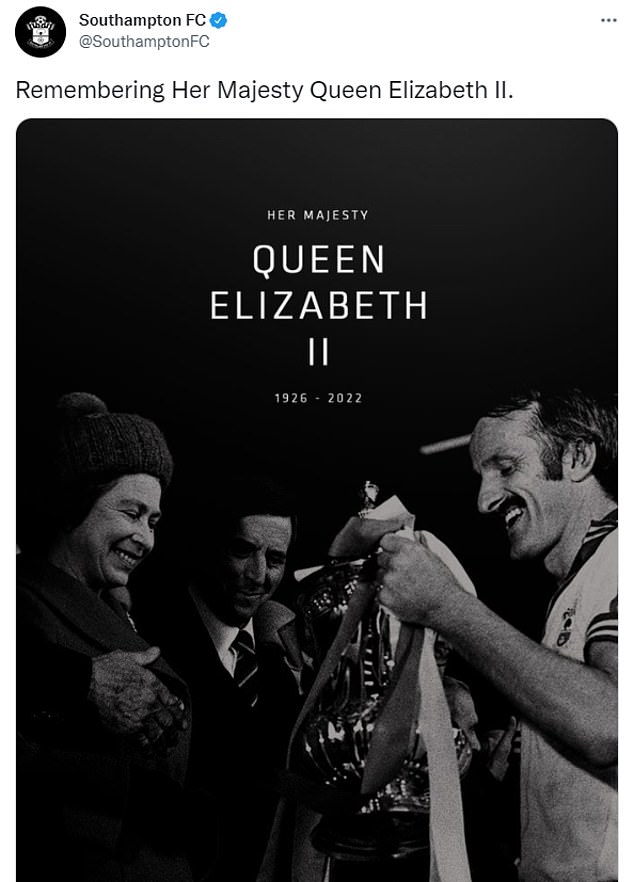 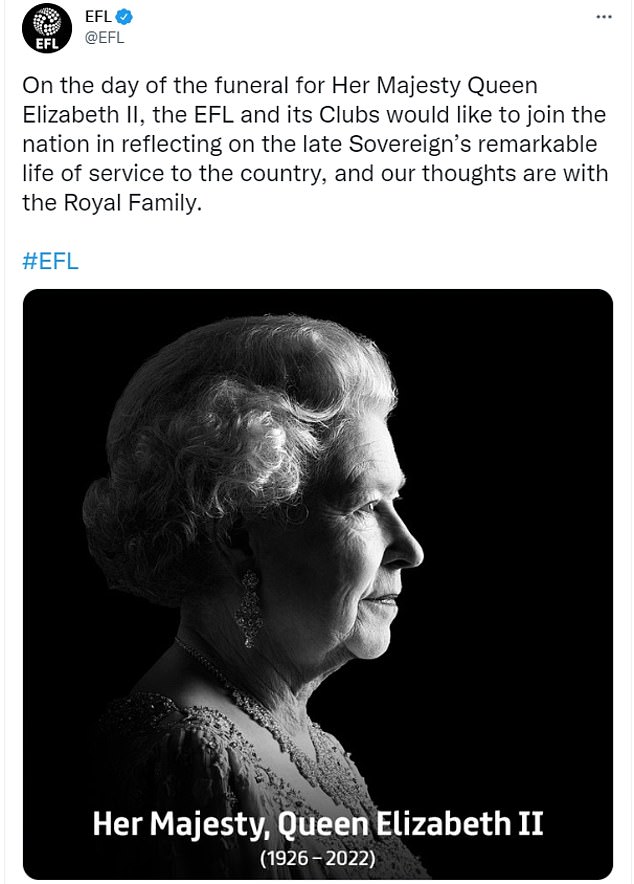 While sport is paused at home, some British teams competing elsewhere have announced plans to honour the Queen.

Those include the country’s rowers at the world championships in Racice, Czech Republic, whose request for a schedule adjustment to avoid a clash with the funeral was turned down by World Rowing.

A statement from British Rowing read: ‘We have sought to compete with the most appropriate adjustments to show our respect for HM The Queen, the Royal Family and the nation.

‘The team will be wearing black ribbons when racing during the period of mourning and will join the nation to observe the minute’s silence on Sunday evening. Everyone within the team delegation not directly involved in racing will also observe the two-minute silence on Monday.’