Please Don’t Stop the Music! Spotify launches ‘Only You’ feature including personalised experiences and playlists, a mid-year review and a blended mix with a friend

Music streaming giant Spotify has launched a new in-app experience called ‘Only You’, in another attempt to personalise its user experience.

Only You is like a year-round version of its annual Wrapped feature, which is released in December and reveals to users the songs they played the most over the year.

Spotify announced Only You – named after the smash hit single by Yazoo in 1982 – in a blog post on Wednesday. It’s available to users on both its free and premium subscription tiers.

‘While you’ll have to wait a few more months for Wrapped and the songs and podcasts that soundtracked your 2021, Only You is all about celebrating how you listen,’ Spotify said.

‘Fans can head to Spotify.com/OnlyYou to enjoy a Wrapped-esque shareable experience made especially for them.’

One of the six song list categories is the astrology-themed ‘Your Audio Birth Chart’, which consists of the top artist listened to over the last six months (‘Sun’), an artist listened to that shows a user’s emotional or vulnerable side (‘Moon’) and an artist that users have ‘recently connected with’ (Rising’).

Only You gives another layer of personalisation to the streaming service, which has 356 million users

Another category is ‘Your Dream Dinner Party’, which lets users choose three guests who would attend their hypothetical dinner party.

Once the three musical guests are selected, Spotify will create a playlist of music from them and other related artists.

For example, selecting Liam Gallagher as a guest could add The Beatles, John Lennon or Noel Gallagher’s High Flying Birds to the list.

THE SIX ‘ONLY YOU’ CATEGORIES 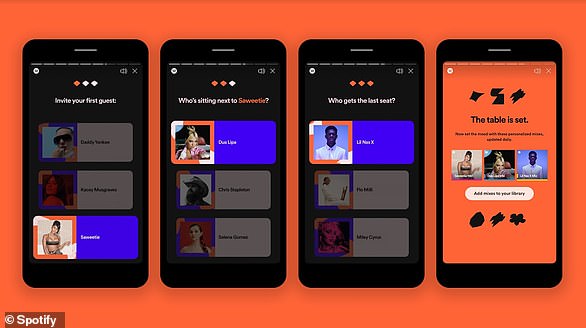 One of the options on Only You, ‘Your Dream Dinner Party’, picks music based on three hypothetical dinner guests

The Only You in-app experience helps users discover:

2. Your Dream Dinner Party: The three artists you’d invite to the dinner party of your dreams. Once selected, Spotify will create a personalised Spotify Mix for each artist to set the mood.

3. Your Artist Pairs: The unique audio pairings that you’ve listened to recently, showing your range of listening interests. For example, who else would play “Greta Van Fleet” right after “Olivia Rodrigo?”

5. Your Time of Day: The music and podcast content you listen either early in the morning or late at night.

6. Your Genres/Topics: How music and podcast genres set you apart based on your listening habits.

Also under the Only You umbrella – which Spotify refers to as a ‘campaign’ – is a new personalised feature called Blend, which is currently in beta but available to users globally.

According to the firm, Blend is a new way for two friends to merge their musical tastes into one curated playlist.

‘Updated daily, listeners can simply invite a friend to blend with – as long as they have a Spotify Free or Premium plan – and Blend will grow with each user over time based on how their listening changes,’ it said.

Blend is a mobile-only experience for both iOS and Android. Users can try it out by heading to the Made for Two shelf in the Only You hub.

Spotify said there are more than 70 million tracks and 2.6 million podcast titles to pick from on its platform, which now has 356 million users.

Spotify offers both free and premium accounts – although users who opt for the free option have to endure ads and certain account restrictions (including the inability to download music).

At the end of April this year, the service increased the prices of three of its four premium subscription options in the UK.

The remaining Premium option – Premium Individual – stayed at £9.99 a month.

Several frustrated users took to Twitter to discuss the price increase, with one claiming that Spotify is getting ‘too big for its boots’. 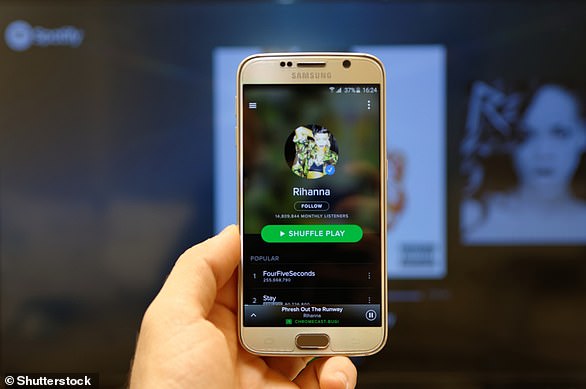 The music industry in the US has been almost completely taken over by streaming services, which now account for 80 percent of overall revenue.

That’s the conclusion reached by the Recording Industry Association of America, which has released a number of key insights and statistics from its upcoming year-end report on the state of music.

There are currently 61.1 million paid subscriptions to music streaming services in the US, a staggering increase from just 1.5 million in 2010.

Surprisingly, almost all of that growth came in the last four years, which saw more than 50 million new accounts added between 2015 and 2019.

The streaming industry leader is currently Spotify, which earlier this year announced it had 113 million paying subscribers worldwide and 248 million monthly active users.

That growth of music streaming has come at the expense of both physical retailers and digital download sales, both of which saw steep declines, according to a story in Variety.

Digital downloads fell from 38 percent to just nine percent over the same period.

More: Music streaming services now account for 80 per cent of the US market