Spring Statement: Hammond urges MPs to avoid No Deal and BACK Brexit delay

Philip Hammond dangled a £26billion deal dividend in front of MPs today as he demanded they take an immediate No Deal Brexit off the table.

The Chancellor used his Spring Statement to issue stark warnings about the risks of crashing out, insisting it meant ‘higher unemployment, lower wages and higher prices in the shops’.

Mr Hammond appealed for ‘consensus’ over how Britain should leave the EU as he painted a rosy picture of the economy if Brexit hardliners back down and endorse the deal.

His intervention comes a day after Tory rebels humiliated Theresa May by handing down a second drubbing of the deal.

The Chancellor said the economy would continue to grow in every year to 2023 – at a faster rate than Germany – if the deal is agreed, even with a slowdown this year.

The Chancellor said the strong economy meant Britain was taking ‘another step of… the road out of austerity’ if it avoided a no deal shock.

Mr Hammond said if MPs pass the deal he will decide in the Spending Review later this year how to share the proceeds from any ‘Deal Dividend’ that Treasury aides said was worth £26billion – £11billion more than thought at the Budget in November.

The money is available deal or no deal – but would be soaked up dealing with the consequences of no deal if Britain crashes out of the bloc.

If there is a deal, the money would go on increased spending on public services, capital investment and keeping taxes low.

Mr Hammond also announced a £100million funding boost to combat knife crime. The money will pay for a ‘surge’ in street policing in an effort to tackle rising levels of violence on the country’s streets.

There were also spending announcements on free sanitary products for schools and a package to tackle climate change.

In the Spring Statement this lunchtime, the Chancellor is expected to pledge an immediate £100million boost for police forces 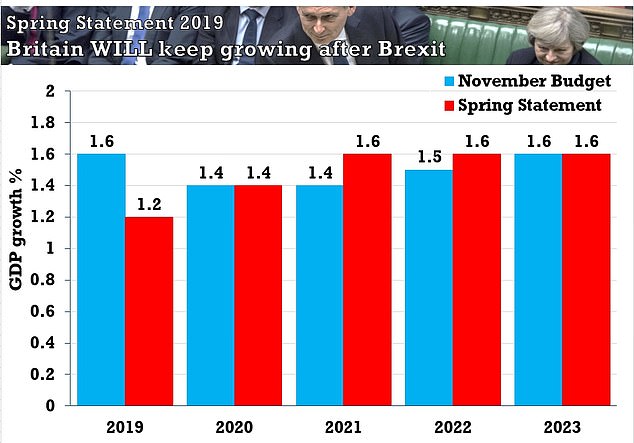 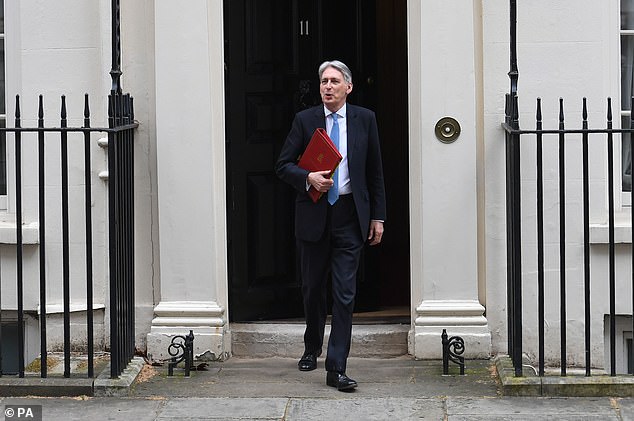 In a spring statement largely overshadowed by chaos over Brexit:

In his 35-minute statement, Mr Hammond said that Tuesday’s vote to reject the EU Withdrawal Agreement ‘leaves a cloud of uncertainty hanging over the economy’ and his most urgent task is to lift it.

Spring Statement 2019: What has Hammond revealed?

He announced the latest economic forecasts from the Office for Budget Responsibility suggest the economy will be sharply slower this year than expected – with a downgrade from 1.6per cent to 1.2 per cent – in November.

He said: ‘Last night’s events mean we are not where I hoped we would be today.

‘Our economy is fundamentally robust. But the uncertainty that I hoped we would lift last night, still hangs over us.

‘Tonight, we have a choice. We can remove the threat of an imminent no-deal exit hanging over our economy.

‘Tomorrow, we will have the opportunity to start to map out a way forward towards building a consensus across this House for a deal we can, collectively support, to exit the EU in an orderly way to a future relationship that will allow Britain to flourish, protecting jobs and businesses

‘A brighter future is within our grasp. Tonight, let’s take a decisive step towards seizing it and building a Britain fit for the future; a Britain the next generation will be proud to call their home.’

The Chancellor warned that the country’s economic progress will be at risk in a no-deal Brexit, and said he was ‘confident’ that the Commons will agree a smooth and orderly EU withdrawal ‘over the coming weeks’.

Mr Hammond told MPs: ‘A no-deal Brexit would deliver a significant short- to medium-term reduction in the productive capacity of the British economy.

‘And because our economy is operating at near full capacity, any fiscal and monetary response would have to be carefully calibrated not to simply cause inflation.’

Mr Hammond said he will decide in the Spending Review later this year how to share the proceeds from any ‘Deal Dividend’, if the UK leaves the EU with a deal, between increased spending on public services, capital investment and keeping taxes low.

Of the deal divided, a Treasury spokesman said the extra cash had been generated by wage growth driving increases in income tax and national insurance contributions.

In the event of a Brexit deal being agreed the cash would be ‘spent on our collective priorities and they include keeping the debt falling, public services, keeping taxes low and capital investment’.

The spokesman added: ‘It is there to spend on those four priorities once we no longer have the uncertainty of no deal hanging over us. Otherwise it remains … an insurance fund if needed. 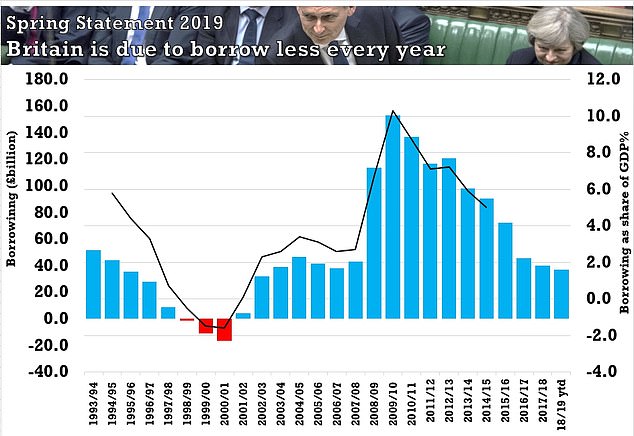 Mr Hammond is also expected to warn today that money to end austerity can be found only if MPs vote to leave the EU with a deal. He is expected to unveil a ‘deal dividend’ of £20 billion to invest in public services. PIctured is the current state of the deficit

Responding to Mr Hammond’s statement, shadow chancellor John McDonnell said: ‘We have just witnessed a display by the Chancellor of this Government’s toxic mix of callous complacency over austerity and … mishandling of Brexit.’

Mr McDonnell said downgrading forecasts were a ‘pattern’ under Mr Hammond before he criticised Government borrowing.

Mr Hammond said ‘some girls are missing school’ because they can’t afford to buy them.

The Chancellor said the Department for Education would develop the new scheme in time for the next school year.

He added: ‘On the deficit, he’s boasting about the deficit – he’s not eliminated the deficit as we were promised by 2015.

‘He’s simply shifted it on to the shoulders of headteachers, NHS managers, local councillors and police commissioners and, worst of all, onto the backs of many of the poorest in our society.

‘The consequences are stark – infant mortality has increased, life-expectancy has reduced, and our communities are less safe.

‘Police budgets have faced a cut of £2.7 billion since 2010 and nothing the Chancellor has said today will make up for the human and economic consequences of those cuts.’

Mr McDonnell added there is ‘nothing balanced’ about a Government giving more than £110 billion of tax cuts to the rich and corporations while ’87 people a day die before they receive the care they need’.

He said backed a ‘surging of resources from other areas of policing activity into dealing with this spike in knife crime’ and said forces should ‘move’ money from other areas. 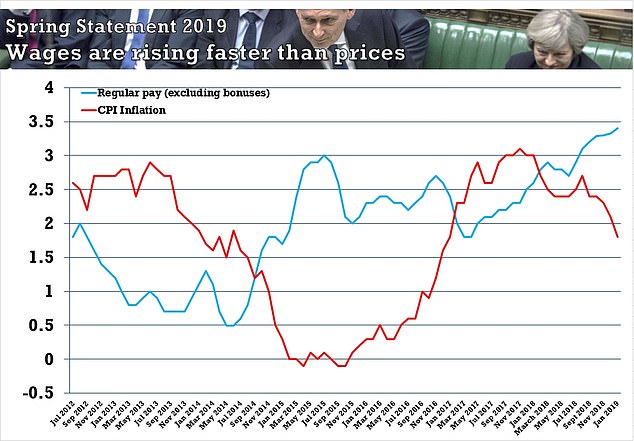 But Mr Javid publicly backed senior police officers who said they needed more money to pay for overtime to put more officers on the streets.

Hammond pledges £100million to fight the ‘scourge of knife crime’

In the Spring Statement, the Chancellor pledged an immediate £100million boost for police forces.

The money will pay for a ‘surge’ in street policing in an effort to tackle rising levels of violence on the country’s streets.

It follows a major Whitehall row between the Home Office and Treasury, and represents a major victory for Home Secretary Sajid Javid.

Sources said around two thirds of the cash would go to paying for a surge in street policing, and the remainder to fund specialist Violence Reduction Units.

On Monday 46 London MPs called for Mr Hammond to use the Spring Statement to help the Metropolitan Police fight knife crime.

Last week a string of former senior officers said there was an urgent need for more police to be recruited.

Lord Hogan-Howe, the former Met commissioner, has called for an extra 20,000 officers across the country and told ministers to ‘get a grip on the crisis’.

Violent crime rose by nearly a fifth in the year to September 2018, according to police figures, and the increase in knife killings has been particularly pronounced.

In the last year alone, 27 under-19s have been stabbed to death, and there have been 285 knife killings in all – the highest level since the Second World War. 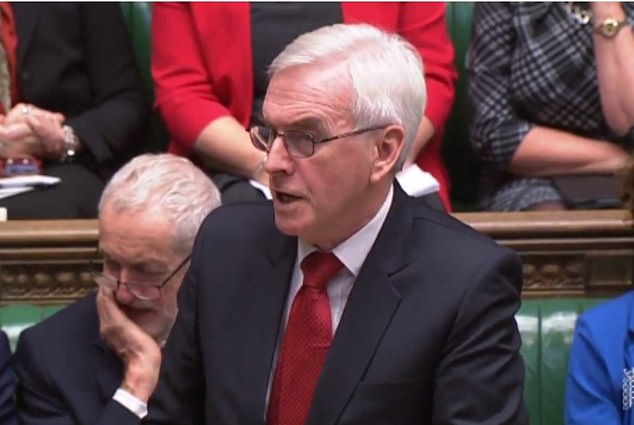 Ahead of the statement, shadow chancellor John McDonnell urged him to end Government cuts

Downing Street is also understood to have been backing calls for extra cash. Forces are already set to receive nearly £970 million extra in the next financial year.

End of the gas boiler: Fossil-fuel heating systems will be BANNED in all new-build houses from 2025

Fossil-fuel powered boilers will be banned in new build homes from 2025, the Chancellor revealed today.

Philip Hammond’s move spells the beginning of the end for gas boilers in Britain.

The move is part of a package of reforms aimed at tackling climate change in today’s Spring Statement.

But shadow housing secretary John Healey tweeted: ‘Seriously underwhelming housing announcements from the Chancellor – debt guarantees a recycled pledge from 2017, and what sounds like a partial backtrack on the Tories’ 2015 decision to scrap Labour’s zero carbon homes plan… by 2025!’

Theresa May last week ordered an urgent set of ministerial meetings to discuss action against knives, but she came under fire after claiming there was ‘no direct correlation between certain crimes and police numbers’.

Mrs May is also considering plans for would-be knife thugs to be treated in the same way as potential jihadis.

A new regime would see councils, schools and other agencies required to report youngsters considered to be at risk of being dragged into knife and gang crime.

Ahead of the statement, shadow chancellor John McDonnell urged him to end Government cuts.

Mr McDonnell said: ‘Living standards have been squeezed by relentless cutbacks to public services, as part of a toxic Tory cocktail of callousness and incompetence.

‘Philip Hammond must abandon this disastrous austerity agenda of the past nine years.

‘Labour will tax the rich and giant corporations to end austerity, fund our public services properly, and rebuild our economy so it works for the many, not the few.’