An animal lover has revealed she’s suffering from PTSD after her ex-boyfriend doused her rabbit’s hutch in petrol before setting a blaze that gutted much of her family home.

Lauren Reynolds, from Letchworth Garden City, Hertfordshire, ended things with her partner Ethan Reynolds, 18, when he became too possessive and controlling.

He tried to pressurise her into getting back together, but when she refused he began making threats before targeting her ‘best friend’ Spice to punish her.

In the middle of the night on July 16 last year, he broke into her home and started a fire that killed Spice and some of the family’s other pets.

The devastating blaze has left Miss Reynolds suffering from anxiety and PTSD, while her family have only just moved back into their home nearly a year later after the attack.

Lauren Reynolds, pictured with her mother Lisa, was targeted by her controlling ex-boyfriend after she broke up with him, leaving her with anxiety and PTSD 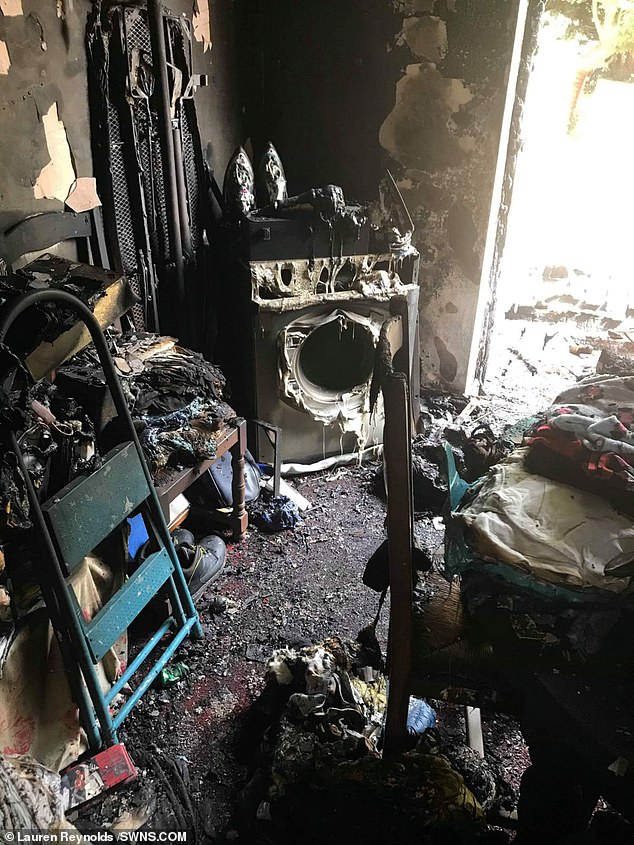 Ethan Andrews, 18, poured petrol over her beloved bunny Spice’s hutch before setting it alight, causing a blaze that gutted much of her family home (pictured) 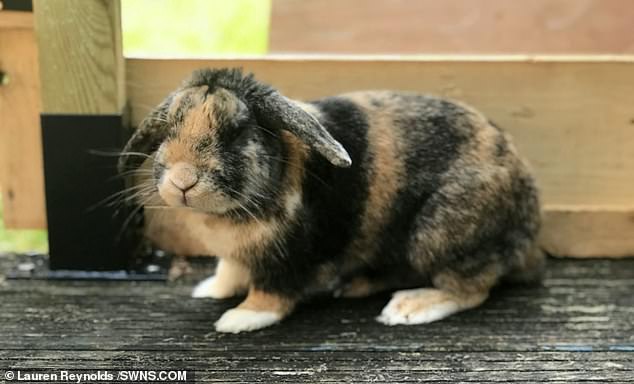 Miss Reynolds said: ‘My rabbit Spice (pictured) was my best friend and Ethan knew that. He target my innocent bunny just to get back at me’

Andrews admitted reckless arson and causing unnecessary suffering to a protected animal at St Albans Crown Court and was sentenced to 32 months – 13 in prison and 19 out on licence.

She said: ‘He burnt most of our family home down in the process too, he’s sick. I wish I’d never met him.

‘I now suffer with really bad anxiety, PTSD, and I have to have therapy. I have dreadful guilt about what happened even though I know logically it’s not my fault. 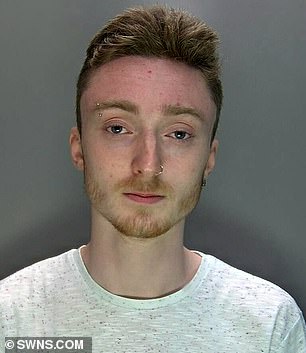 ‘My rabbit Spice was my best friend and Ethan knew that. He target my innocent bunny just to get back at me.’

The pair quickly bonded over their shared love of animals but Miss Reynolds said he became possessive and controlling, so she ended it.

Andrews begged for her back after – claiming to see the error of his ways, she said.

She added: ‘He told me that things would be different but after a few days he went back to being really paranoid and trying to tell me who I could and couldn’t speak to.

‘He’d also taken to ringing me 20 times in a row to ask what I was doing and he’d go crazy if I didn’t get back to him straight away – so I ended it again, this time for good.

‘After I dumped him he sent some really nasty texts saying: “It’s only over when I say it’s over” and “I can’t wait for you to die”.

‘But I ignored him and after a little while the messages stopped – I honestly thought that would be the last we’d hear from him.’

But on July 16 last year Andews drove to the home Miss Reynolds shared with her mother, Lisa, 54, her father, Darren, 47, and brother, Alex, 21 – as well as her rabbit Spice, four degus, a hedgehog, a dog and two geckos. 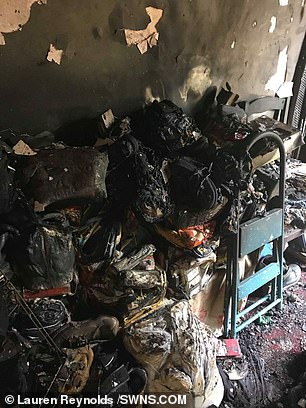 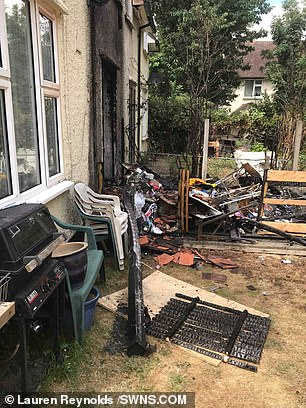 Andrews set fire to Miss Reynolds’ home in Letchworth Garden City, Hertfordshire, while she, her mother Lisa, father Darren, 47, and brother, Alex, 21, were inside. The family have only just moved back in after the blaze on July 16 last year 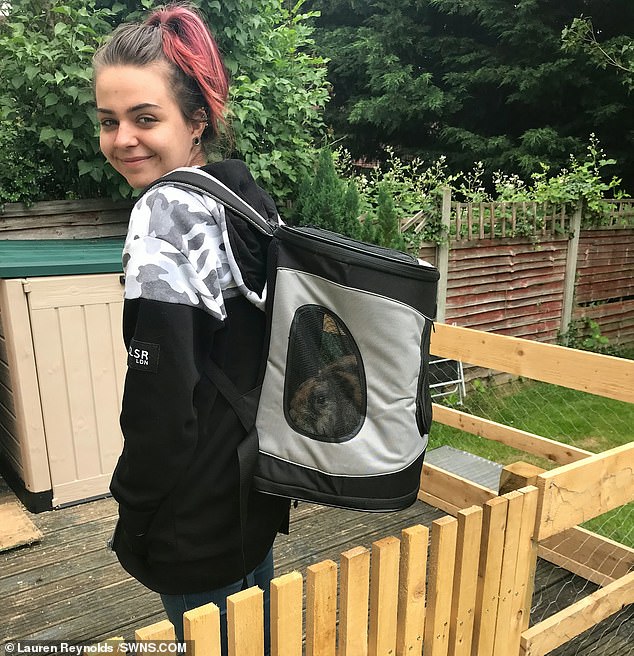 Also inside were Miss Reynold’s rabbit Spice, pictured together, four degus, a hedgehog, a dog and two geckos. Her father managed to save their hedgehog Wrillo

It wasn’t until the family and neighbours were evacuated from the house that it dawned on them the fire may have been deliberate, she said.

Miss Reynolds, who has had to give up her studies after the incident due to stress, said: ‘All I remember from that night was being woken up by my dad dragging me out of the house.

‘I was stood in the street in my PJs – there were fire crews everywhere and all our neighbours had been dragged out of their houses too.

‘All I cared about were my animals that were stuck inside, it was horrible.

‘I was wailing and crying uncontrollably and my dad went back into the fire, we were screaming at him not to as it was so dangerous but he came out about 30 seconds later – he’d managed to rescue my hedgehog Wrillo.

‘But it wasn’t until my brother Alex mentioned that he thought Ethan might be responsible that the penny dropped. But even after everything he’d done I still didn’t think he’d be capable of that.

‘Ethan tried to claim in court that he didn’t realise Spice would be in his hutch, but as my dad said “where did he think Spice would be, on a bloody night out?”

‘Thankfully the judge didn’t believe a word of it.’ 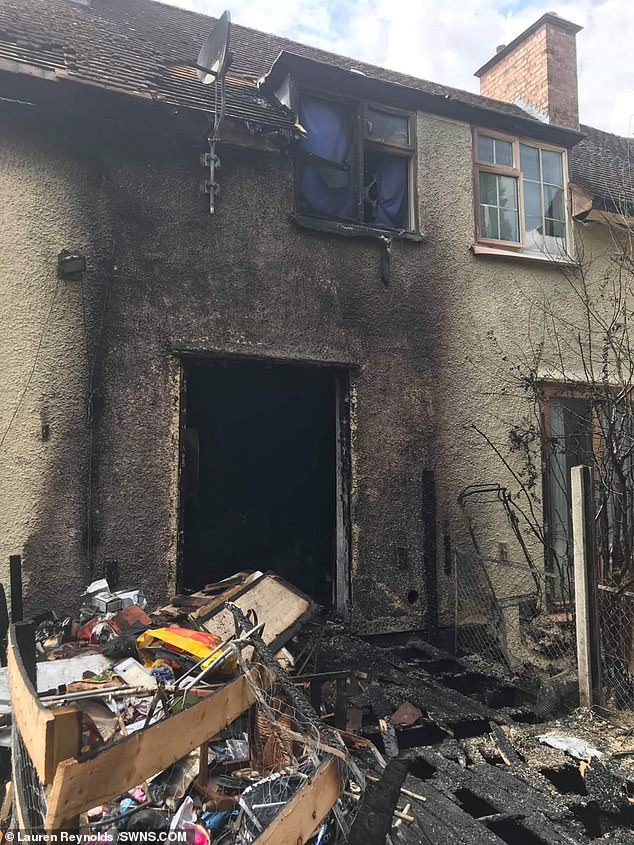 Miss Reynolds’ mother Lisa said: ‘It’s horrid to think that we welcomed him into our home and our lives for him to repay us like this’

Officers arrested Andrews hours later after reviewing a neighbour’s CCTV and finding petrol in a jerry can and a lighter in his car, police later said.

The case was investigated by Hertfordshire Constabulary’s Domestic Abuse Investigation and Safeguarding Unit.

Detective Constable Colin Workman said: ‘Andrews planned this attack to get back at the victim. It was an act of pure callousness to target a rabbit in order to achieve this goal.

‘His deliberate actions caused immense distress and harm to the victim and her family.

‘I hope this sentence today allows them to start putting these terrible events behind them.’

Miss Reynolds and her family have only just moved back into the family home after being in cramped temporary accommodation.

Her mother Lisa said: ‘Lauren is the sweetest girl, she’s so caring and kind. This whole thing has hit her really hard.

‘The whole family have massively suffered, our pet dog even died a few months after the fire from smoke inhalation.

‘It’s been devastating for us all. I’ve tried to console her but she seems to blame herself. The only person to blame for this is Ethan.

‘It’s horrid to think that we welcomed him into our home and our lives for him to repay us like this.’