By Samantha Mordi For Mailonline

A lovesick man who was rejected by his crush set himself on fire in front of her.

The unnamed man burnt himself alive in a supermarket in the town of Sosnovoborsk in central Russian Krasnoyarsk Krai after he was turned down.

He suffered horrific burns to 99 percent of his body and later died as a result of his injuries.

A lovesick man who was rejected by his crush set himself on fire in front of her. He can be seen calmly setting himself alight in shocking footage

The object of his affections reportedly worked in the supermarket.

In a clip taken from the shop’s CCTV camera, the young man is seen pouring what appears to be a flammable liquid on himself before setting himself on fire.

He can be deliberately dousing himself as an elderly person is standing feet from him.

When he is done he can be seen carefully putting plastic bottle back into the plastic bag and reaching for lighter.

Seconds later, his clothes have gone up in flames. 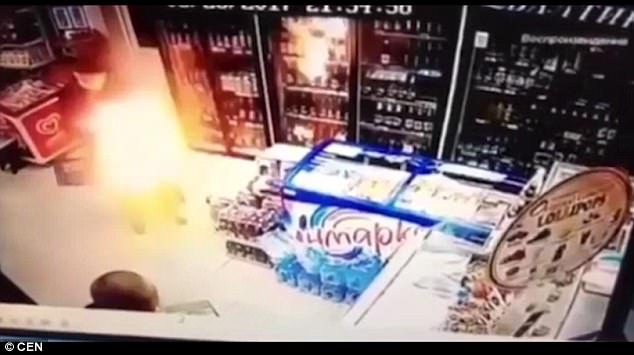 He was in flames for a total of 40 seconds,  where he set himself on fire in front of his ex-partner

Over the next 40 seconds he can be seen struggling in agony. In the end of the video the man is seen walking away despite being on fire.

The man was taken to Sosnovy Bor hospital  where he was treated for the gruesome burns covering 99 percent of his body.

The 30-year-old soon died from his injuries.

Russian police are now investigating the incident. No one else was reported to have been involved.

The clip was uploaded online where internet users gave their own opinion on what had happened.

One user ‘Yana Valerievna’ said: “Why he did in inside of supermarket. Why he needed all this show off. This was so painful.”

Another said as ‘Aleksandr Aleksashin’ wrote: “He is a psycho and needed an audience.” 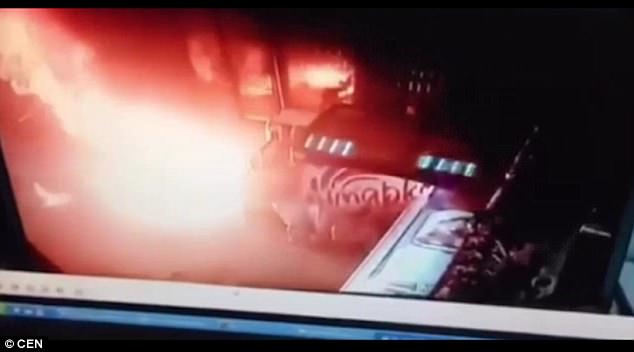